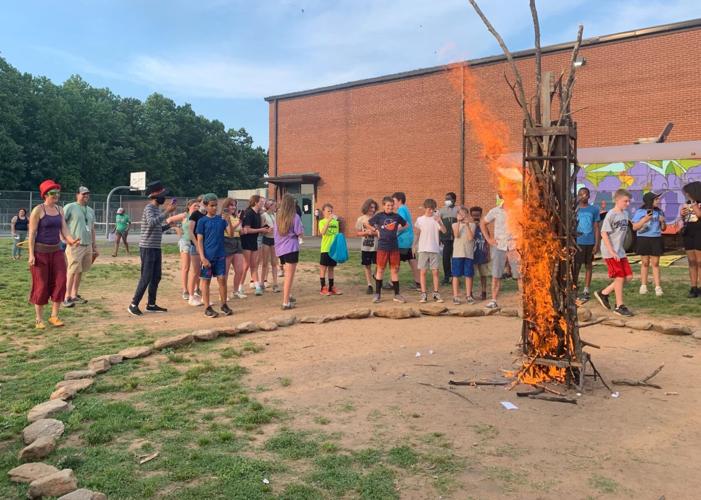 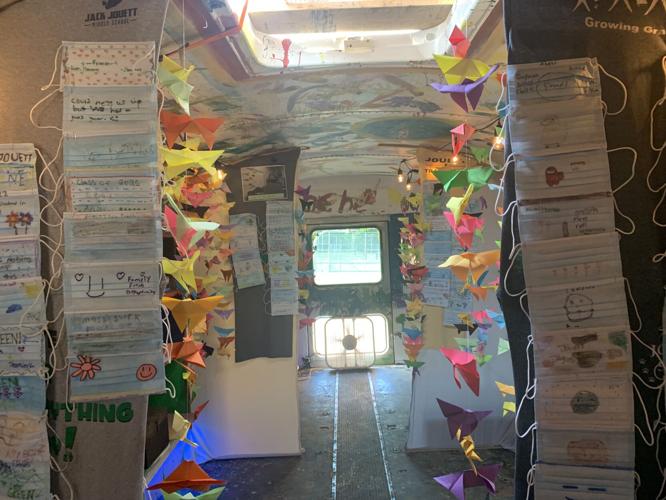 Items for a Jack Jouett Middle School time capsule are displayed in a school bus Saturday at the school. Students made enough origami butterflies to represent every student at the school. The items will go fill a trunk that will be buried and reopened in eight years.

Jack Jouett went down in flames and Journey arose from the ashes.

In July, Jack Jouett Middle School will officially become Journey Middle, but the school community got a head start this week celebrating that transformation.

With a bonfire, paint-by-numbers mural and time capsule, students and the school community marked the end of the Jack Jouett era for the 56-year-old school on Saturday.

Drama teacher Wendy Winkler and her students organized the event, including creating a trunk full of pieces for the time capsule. Students created art pieces out of cloth masks to talk about their last few years in middle school and what’s important to them. They also made hundreds of origami butterflies to represent their journey.

Those pieces were displayed in a school bus turned art exhibit that’s owned by Winkler and known as the Rusty Iris. After their time in the Rusty Iris, the students’ pieces will move to a trunk that will be buried. Students in kindergarten now will dig up the trunk when they are in eighth grade, Winkler said.

In August, the School Board voted in favor of changing Jack Jouett’s name to Journey. The committee that recommended that new moniker said it reflected the journey students take during middle school.

Jouett is one of seven schools in the division that have had their names reviewed since 2018, and one of four that emerged with new names. The School Board directed the superintendent to review all schools named after individuals.

Jouett was a Revolutionary War soldier who is famous for riding 40 miles to warn members of the General Assembly who had retreated to Charlottesville that British soldiers were coming.

Winkler said though she wasn’t involved with the review process, she has “realized how genius the name is.”

Jouett was known for his journey and students at the school are going through their own, she added.

“We love you, Jouett or Journey,” some students said into a microphone before the bonfire.

As students watched the wood ignite, some urged the fire to burn faster while others serenaded the group with the chorus of Billy Joel’s “We Didn’t Start the Fire.” Area firefighters were on hand to supervise the blaze.

Eventually, the wood burned away to reveal a metal sculpture of the new name, Journey.

Items for a Jack Jouett Middle School time capsule are displayed in a school bus Saturday at the school. Students made enough origami butterflies to represent every student at the school. The items will go fill a trunk that will be buried and reopened in eight years.