Updated Dec. 29 with a copy of the complaint.

Five Albemarle County families, represented by the Alliance Defending Freedom, intend to sue the Albemarle County school division over what they say are discriminatory policies, according to a news release Wednesday.

The students are represented by initials, and the names of parents in the lawsuit were redacted in a filing provided by the alliance, a national nonprofit based in Arizona that seeks to defend religious liberty and parental rights, among other issues. All the plaintiffs’ children live in either Crozet or Ivy and attend schools in the county’s western feeder pattern, according to filing. 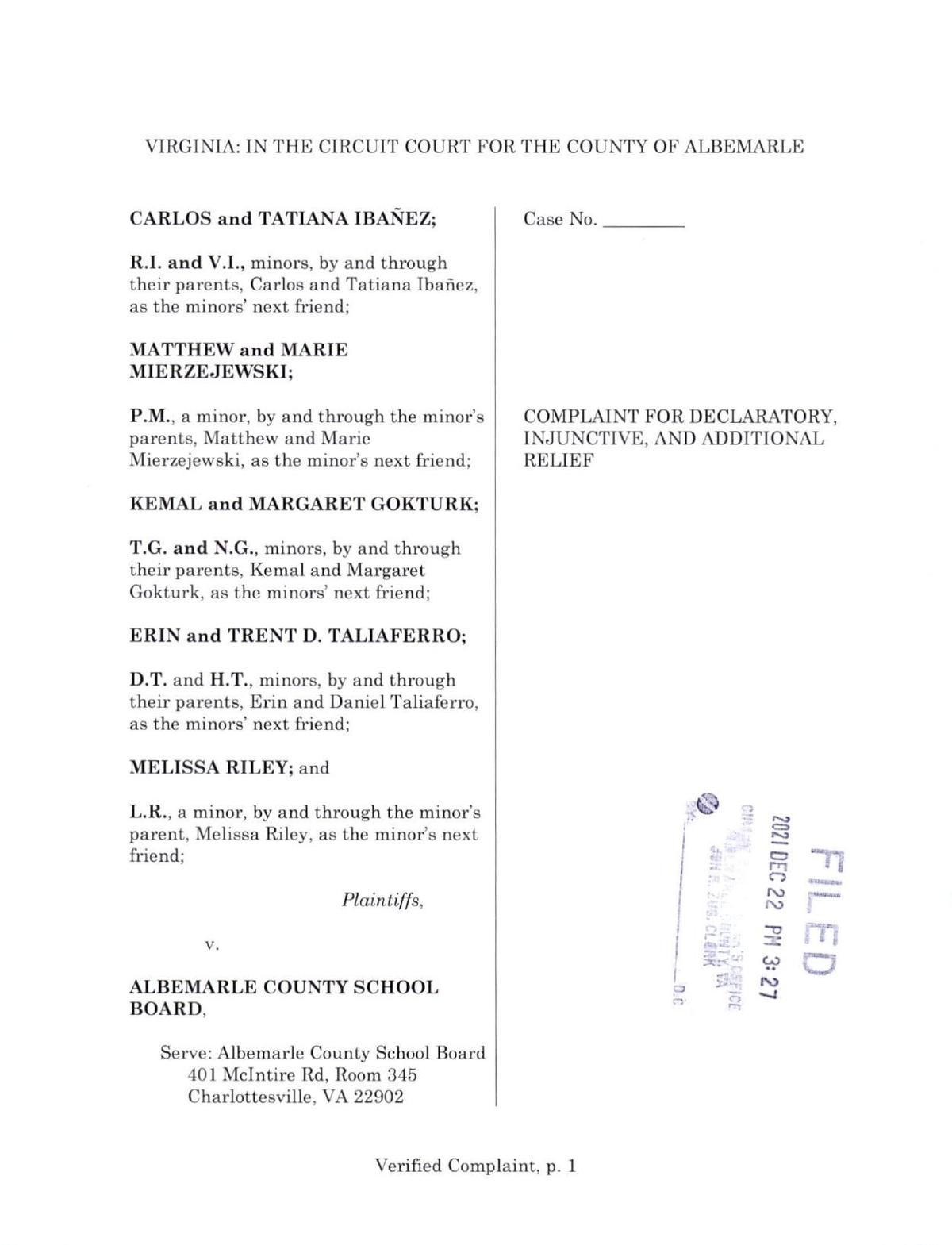 The lawsuit, which was filed in Albemarle County Circuit Court, was not listed in the online court system as of Wednesday evening. The suit is one of several filed across the country that challenge the teachings of racial equity in public schools. A group of parents in Loudoun County sued that school system in June, alleging its equity programs were unconstitutional, according to WTOP.

The 56-page complaint largely centers on Albemarle County’s anti-racism policy, which was adopted in 2019 in order to eliminate racism and improve outcomes for students who have historically lagged behind their white, more affluent peers. That policy “is racist at its core,” according to the filing, and the plaintiffs are seeking an injunction to stop the enforcement of the policy.

“Without an injunction or a meaningful way to opt their children out of the policy-based instruction, parent plaintiffs cannot protect their children from racial stereotyping and racial discrimination at Albemarle Public Schools,” the plaintiffs’ attorney Tyson Langhofer wrote in the complaint.

Schools Superintendent Matt Haas and Bernard Hairston, the division’s assistant superintendent for school community empowerment, are also named in the complaint along with the School Board. Division spokesman Phil Giaramita did not respond to a request for comment late Wednesday evening.

“Schools exist to educate, not indoctrinate children,” ADF senior counsel Kate Anderson said in a news release. “Every parent has the right to protect their children against a school district that uses their authority to indoctrinate students in harmful ideologies. Our clients believe that every person is made in the image of God, deserves respect, and therefore, should not be punished or rewarded for something over which they have no control. Public schools have no right to demean students because of their race, ethnicity, or religion.”

In the complaint, the plaintiffs allege that by implementing the policy, the school division has violated their civil rights such as freedom of speech and freedom from religious and viewpoint discrimination. As part of the policy, the school system has taken several steps to eliminate different types of racism — individual, institutional and structural, which are defined in the policy.

“... Defendants reject the idea that racism is a malady of character that can affect any human heart,” Langhofer wrote. “Rather, they embrace the idea that racism mainly exists in some institutions and some people groups, instructing students that ‘racism’ is ‘the marginalization and/or oppression of people of color based on a socially constructed racial hierarchy that privileges white people.’”

Overall, the division’s policies and practices “inculcate hostile racial stereotypes and treat students differently based on race,” according to the complaint.

The plaintiffs’ attorney points to a set of lessons piloted at Henley Middle School last spring that discussed racism, bias and identity, a division-wide teacher training about white privilege and the implementation of a broader anti-racism curriculum in English and social studies as ways that the policies and practices are affecting students.

One parent, who has an eighth-grader at Henley Middle School, said in the complaint that she didn’t want the anti-racism policy to change how her son viewed himself or his racial background, or that of his friends and his family. The child’s mom is white/Native American, according to the filing. Her name was redacted by the ADF.

Several of the plaintiffs are Catholic, and others are Protestant. According to the complaint, the school system’s efforts to eliminate racism conflict with the plaintiff’s religious and philosophical beliefs.

“Plaintiffs’ faith teaches them that God creates all people equal, and that a person’s race has no relation to that person’s inherent dignity as a child of God,” Langhofer wrote. “Accordingly, plaintiffs believe that all people should receive equal and loving treatment.”

The complaint echoes several points made over the summer at School Board meetings in response to the Henley lessons. The content of the lessons has alarmed a group of parents who said the units overstepped the school’s role, discriminated against their children who hold different beliefs, infringed on parental rights and created divisions.

“When did public schools truthfully only become welcoming if you’re a Democrat?” Henley parent Marie Mierzejewski told board members in May. “That’s honestly what it’s come down to — feeling that if you have conservative values, you are really unwelcome to express them at the school, and that you’ll get ostracized. And that’s already been happening to my son for saying to people he believes in male and female.”

Another group of parents spoke out in support of Henley and the division’s anti-racism policy, which was initially drafted by students.

The School Board also backed Henley and the policy in a joint statement. The anti-racism policy is a point of pride for the school system and a recruiting tool for educators.

“We welcome all points of view in how best to strengthen our continuous growth model, and we reject all efforts that would have us resist positive change in favor of the status quo,” the board wrote in a joint statement in the summer.

The plaintiffs are united in the goal of eliminating racial discrimination in Albemarle schools, according to the complaint.

“The question in this case is not whether racism still exists; it does,” Langhofer wrote in the complaint. “Nor is the question whether racism must be vanquished; it must. Rather, the question is whether Defendants may use unconstitutional means to indoctrinate students with an ideology that teaches children to affirmatively discriminate based on race. The Virginia Constitution answers with a resounding ‘no.’”

ADF complaint against Albemarle School Board