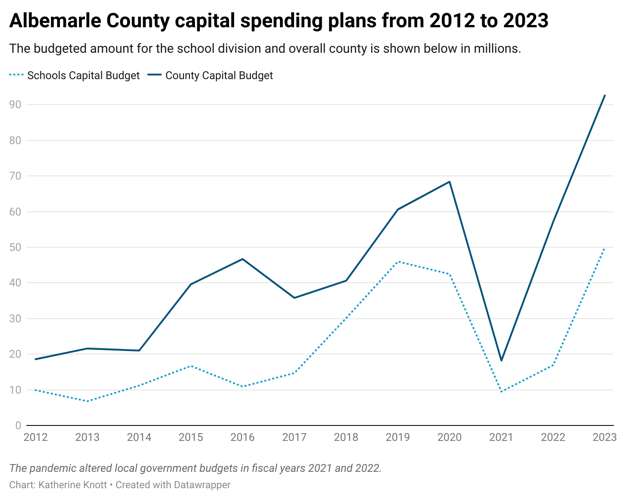 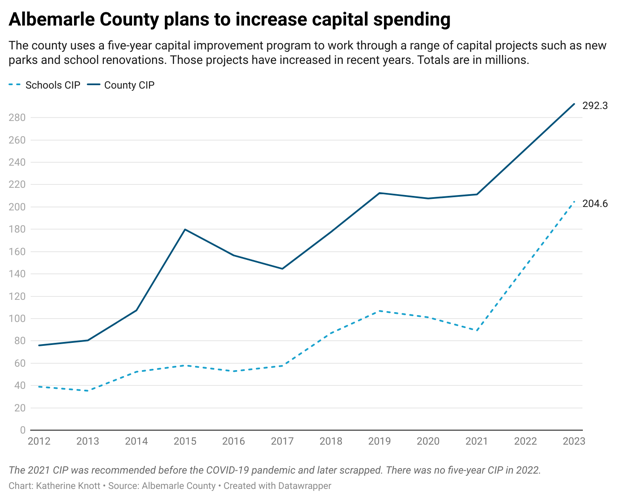 In the next five years, the Albemarle County school division will build two new schools and start designing a third, if everything goes to plan.

The county is planning to commit $204 million for school maintenance and construction projects over the next five years, which accounts for 70% of the county’s proposed five-year $292 million capital improvement program. County officials are looking to spend big on priorities like Biscuit Run Park and upgraded court facilities. During the first two years of the pandemic, the county largely paused its long-term capital planning and the proposed improvement plan.

The capital budget and five-year plan are approved by the Albemarle County Board of Supervisors as part of the operating budget for the coming fiscal year. Funding school construction projects in Virginia is largely a local responsibility, so those plans will also be on the the minds of the Albemarle County School Board when it presents its $242 million funding request to the Board of Supervisors at a Monday budget work session.

The county’s five-year capital program includes $40.2 million for a new elementary school and $3.5 million to start planning a second new elementary school in fiscal year 2027, the last year of the plan. In five years, the cost of school division projects in the county plan have nearly doubled.

The school division is getting $50 million from the county’s $92.6 million capital budget for the upcoming fiscal year, the largest ever in terms of dollars and a significant ramp up in spending. The schools’ capital budget includes $32.5 million for a new high school center and an additional $2.19 million for the expansion of Mountain View Elementary. The rest of the money goes toward replacing school buses, maintenance projects and an indoor air quality project, among other items.

The proposed budget would let school division move forward on a 400-student center that’s a key piece in a plan to redesign address capacity concerns at Albemarle and Western Albemarle High schools. The project was put on hold during the pandemic.

The center will be built near Monticello High School and off Mill Creek Drive. The building will be the first new school constructed in the division since 2002, but the school board is also concerned about the buildings it currently has that need renovations.

While the school division has requested $106 million over five years to fund renovations at the elementary, middle and high schools, the county plan includes only $9.4 million of that.

“Although I’m pleased that we have funding for one center and one school in the next five years when we wanted two, we have less than 10% of the funding for renovation,” board member Kate Acuff said Thursday. “I think this is a drum we need to continue to beat.”

Bboard member Jonno Alcaro said that funding level, if it remains constant, would take 50 years to get through all the renovations.

“That’s not something that the schools or the school division or future boards can afford to deal with as the law of entropy just makes things disintegrate more and more,” Alcaro said. “It can’t be a 50-year project. This needs to get done within the next 10 years.”

The division’s long-range planning advisory committee recommended $196.2 million in construction projects in a report that serves as the basis for the board’s capital planning.

The elementary schools in the budget are planned for the northern and southern parts of the county to alleviate overcrowding at Baker-Butler and Mountain View elementaries. Which one goes first is up to the board. School officials have said that building a new school will take at least five years from initial planning to opening the doors to students.

Baker-Butler and Hollymead elementaries are in areas with high neighborhood growth and future developments that are expected to bring in lots of students, according to the division’s analysis.

The northern elementary school is estimated to cost $40.2 million while the Mountain View area school would be about $42 million, according to board documents.

The new school in the southern area would serve about 400 to 450 students and split the Mountain View attendance zone into two schools.

In the meantime, an expansion of Mountain View is already in the works. That includes six classrooms, smaller spaces where staff and students can work, an expanded cafeteria and other upgrades to the building.

Because of inflation, the current construction market and changes to the project’s scope, the expansion is expected to cost $8.6 million, $665,950 more than originally budgeted. The county would need to budget another $1.475 million to pay for additional plans in the project such as improvement to the bus loop and parent drop-off area.

Darden Towe fields continue to be an issue in Albemarle

Why gas prices are finally letting up and for how long

How one school increased its resiliency from earthquakes, tsunamis in Pacific Northwest

How one school increased its resiliency from earthquakes, tsunamis in Pacific Northwest

How airtankers help battle massive wildfires in the U.S.

How airtankers help battle massive wildfires in the U.S.