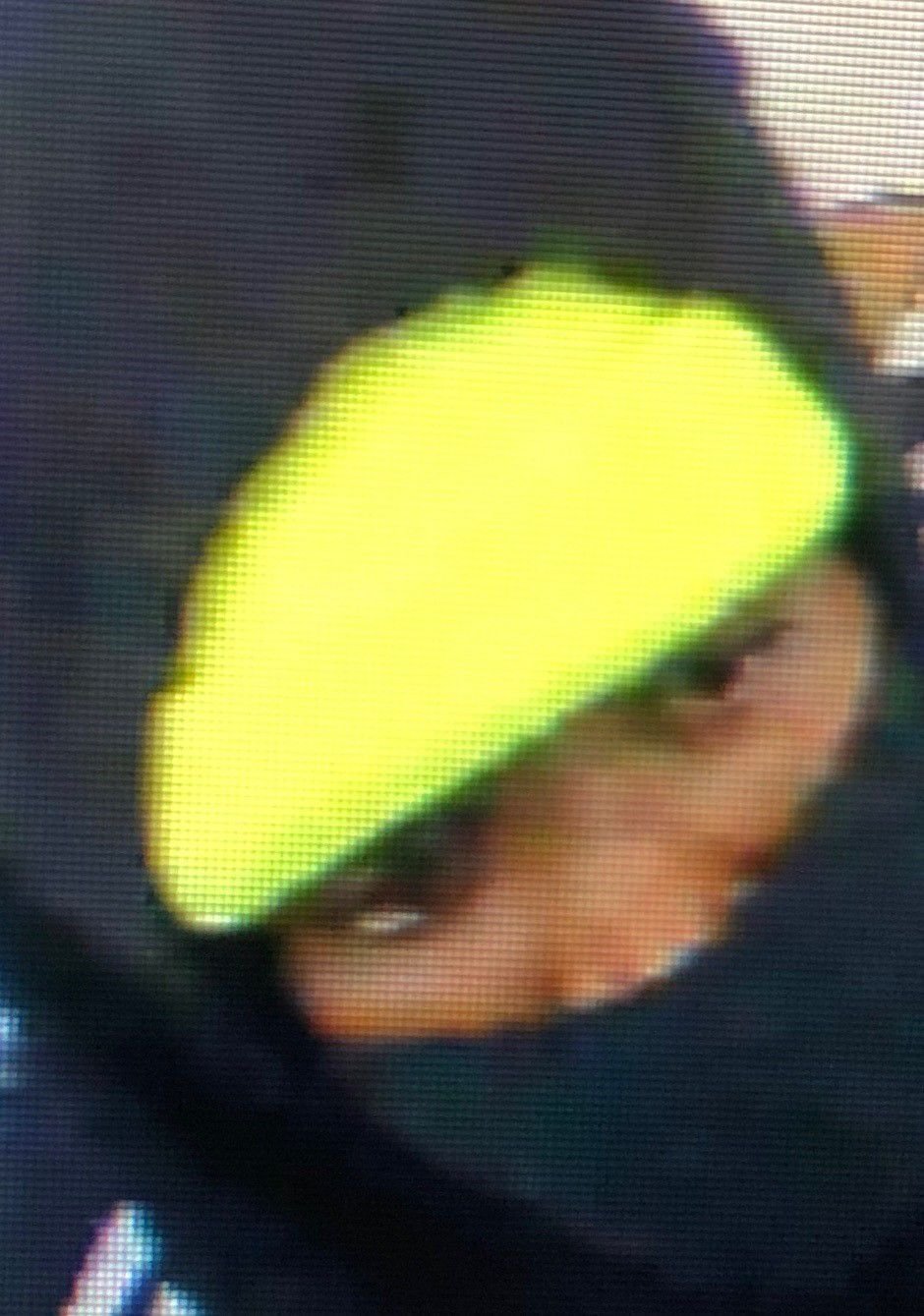 Courtesy of the Bureau of Alcohol, Tobacco and Firearms

Federal agents released these photos of a man they say is suspected of several area armed robberies. The photo is from a surveillance camera. 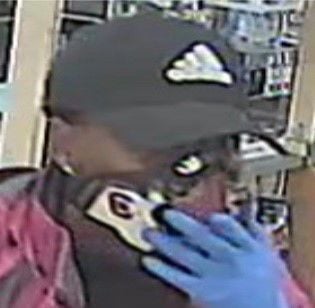 Courtesy of the Bureau of Alcohol, Tobacco and FirearmsFederal agents released this picture of a man they say is a suspect in a series of area armed robberies. The photo is taken from a surveillance camera.

Federal investigators have joined local police in the search for two men believed to have robbed at gunpoint a half-dozen local convenience stores.

The U.S. Bureau of Alcohol, Tobacco, Firearms and Explosives, ATF, announced on Tuesday that it is offering a $5,000 reward for information leading to the arrest of the two men who are believed to have also robbed a Stafford County convenience store.

“ATF Special Agents are working this investigation alongside detectives from Albemarle County Police Department, as well as from Charlottesville Police Department and Stafford County Sheriff’s Office,” authorities said in a news release.

Amanda Hils, spokeswoman for the ATF, said the agency is setting the reward to encourage people who may have seen something odd on the dates of the robberies to speak up.

“We want to get the communities involved and let them know this is going on and, hopefully, get information that will help stop it,” Hils said. “A lot of people may have seen something and thought it was strange but didn’t think it was important. We hope they will report that to us. It could be very important.”

Witnesses have been consistent in describing the men as African American, likely in their 20s and usually wearing gloves, hooded sweatshirts, surgical masks and escaping on foot. In three of the robberies, one of the men assaulted the clerk being held up, according to police reports.

The duo began their local robbery spree with a June 18 hold up of the Oak Hill Market and Deli on Country Green Road at 7:30 a.m., when Albemarle County police said a man entered the store, brandished a handgun, and demanded money from a store employee. He ran off on foot with an undisclosed amount of cash.

The pair’s last reported hold up occurred on Sunday at 5:42 a.m. at the 7-Eleven on Solomon Drive, in Stafford County.

A Sunday night gunpoint holdup of a rideshare driver in Charlottesville around 8 p.m. in the 1600 block of 6th Street SE shares some similarities with the other robberies, but Charlottesville Police said they could not comment on whether it was, in fact, connected.

The department also declined to comment on the joint investigation with Albemarle County and the ATF.

Albemarle County police officials could not be reached for comment by press time.

Hils said it is not uncommon for the federal agency to work closely with local police and sheriff’s deputies when investigating armed robberies or other crimes involving firearms or explosives. That, she said, is because the agency has expertise local agencies and investigators can utilize.

“We’re involved a lot more than people realize,” she said. “In most cases, the local departments are in charge of the investigation and releasing information. In this case, we set up the reward and so we released the information.”

No information was available for the June 27 robbery, but Charlottesville police reported that in the July 30 robbery the store clerk was robbed at gunpoint and the suspect then fled on foot. No injuries were reported.

On Aug. 14, the 7-Eleven at 385 Greenbrier Drive was robbed at 6:45 a.m.. Albemarle County police say the suspect entered the store, displayed a gun, demanded money from the register and then struck the store clerk before driving off in a dark colored SUV.

On Aug. 31, two men struck the Kangaroo Express gas station and convenience store at 1099 E. Rio Road, according to the ATF.

Albemarle County police say the suspect brandished a handgun, demanded the money from the cash register, struck the clerk and ran away on foot with an undisclosed amount of cash.

The Sept. 4 robbery occurred at 9:49 p.m. at the Subway/7 Day Junior convenience store at 111 Maury Avenue. Charlottesville police said at the time that the clerk reported a man holding a pistol demanded money, assaulted the clerk and ran away. The clerk was treated at the University of Virginia Medical for minor injuries.

On Sept. 13, the pair made the last robbery that has been connected to them when a man entered the 7-Eleven on Solomon Drive around 5:46 a.m. and at gunpoint ordered the clerk to put money and tobacco products in a bag. The man then ran away through the parking lot.

The Stafford County Sheriff’s Office searched the area with a drone and dogs but could not locate the man.

The Sept. 13 evening robbery of the driver in Charlottesville shared similar circumstances but has not been linked to the duo.

In that incident, police reported that the driver arrived to pick up a fare and was robbed at gunpoint by two men who then fled on foot.

“These two individuals should be considered armed and dangerous,” ATF officials said in the release. “If members of the public think they see them, they should call 911. Anyone with information about them or others who may be involved is asked to contact investigators immediately.”

ECC board credits director with improvements in efficiency and morale.

Neo-Nazi podcaster to be arrested for contempt of court

Robert "Azzmador" Ray, a neo-Nazi podcaster and writer for the white supremacist blog the Daily Stormer, will be the second defendant to be arrested for contempt of court in the Sines v. Kessler case, a lawsuit filed nearly three years ago on behalf of a slew of Charlottesville-area residents.

Agustin Alberto Lainez, 22, pleaded guilty to one count of cyberstalking and now faces a maximum penalty of up to five years in prison and/or a fine of up to $250,000, according to a news release from U.S. Attorney's Office.

In a filing submitted in Albemarle County Circuit Court last month, counsel representing Virginia based political operative Liz Mair described the lawsuit as a “direct assault on freedom of speech,” and argued that Rep. Devin Nunes failed to adequately allege a conspiracy between Mair and the McClatchy Company.

According to expert testimony, the child was underweight and short for his age and off the growth chart, indicating that he was malnourished and not just small for his age. The child also had evidence of bucket fractures on his arm, indicating recent and older abuse in the form of harsh jerking of the arm.

Officer Jeffrey Jaeger, who is white, has been charged with assault and battery stemming from the March 3 arrest of a man who court records show is black.

Two white men tried to break the front door glass of Bellair Market with a rock Friday morning, before realizing there were workers in the shop and running off, according to police.

Construction began in early 2019 to renovate the Charlottesville Circuit Courthouse, adding a second courtroom and an elevator to the structure.

Courtesy of the Bureau of Alcohol, Tobacco and Firearms

Federal agents released these photos of a man they say is suspected of several area armed robberies. The photo is from a surveillance camera.

Courtesy of the Bureau of Alcohol, Tobacco and FirearmsFederal agents released this picture of a man they say is a suspect in a series of area armed robberies. The photo is taken from a surveillance camera.