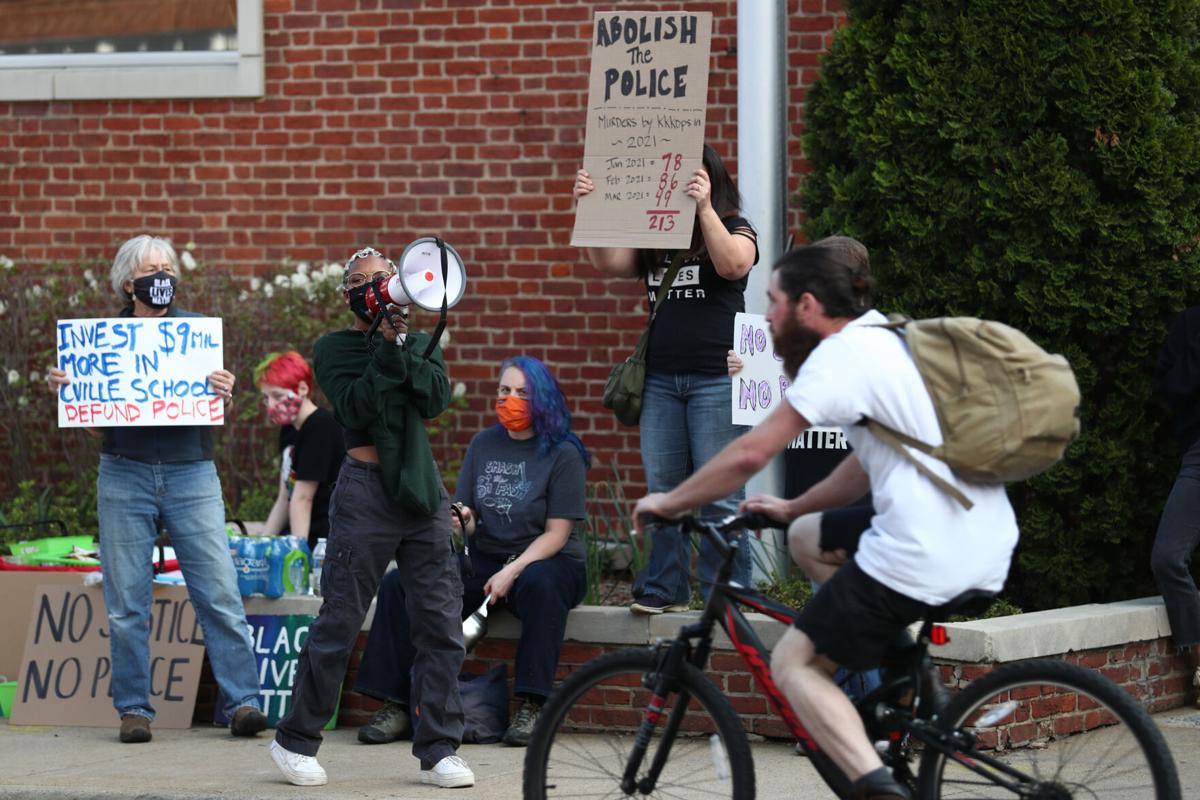 ERIN EDGERTON/THE DAILY PROGRESS Various chants are led during a noise demonstration hosted by Cville Beyond Policing on Monday, April 19 outside the Charlottesville Police Department. 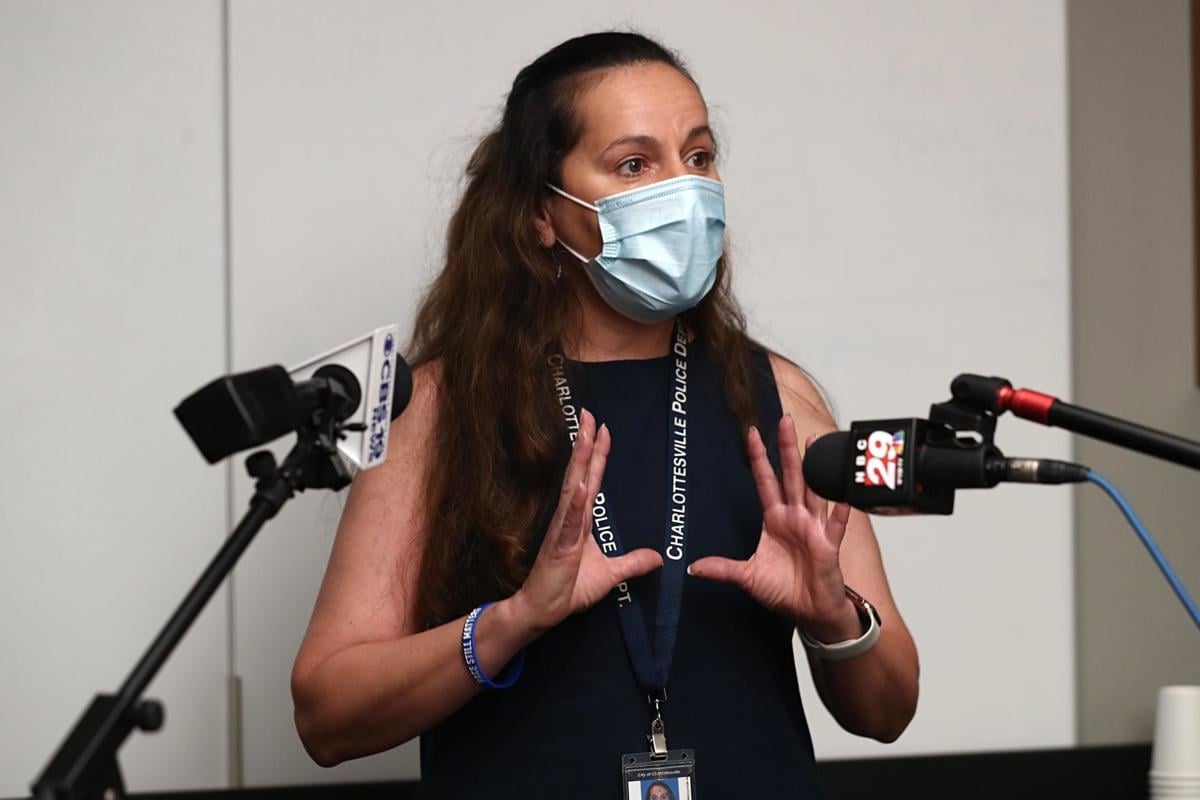 Charlottesville Police Chief RaShall Brackney describes the steps her department will take after an officer’s body camera fell off during a violent arrest Wednesday evening. The Charlottesville Police Department released the arresting officer’s body camera footage of the encounter Thursday after an Instagram video of the incident surfaced. ERIN EDGERTON/THE DAILY PROGRESS

The surprise termination of Charlottesville Police Chief RaShall Brackney following internal complaints of low morale caught many off guard, but online documents are suggesting that the problems go deeper than morale.

While city officials will not provide more detail, Charlottesville Mayor Nikuyah Walker shared a five-page document on Facebook that portrays the chief as a change agent and a police force that wanted to block that change.

Wednesday evening a spokesman for the city announced that the contract of Brackney, the city’s police chief since June 2018, had been terminated. The termination is considered not-for-cause, meaning Brackney would be entitled to various compensations, including 12 months’ salary.

The release did little to explain the decision and appears to contradict a lengthy August release from the city that pushed back against internal criticisms, primarily levied by the Central Virginia Chapter of the Virginia Police Benevolent Association.

City Manager Chip Boyles declined to elaborate on the decision Thursday, and city spokesman Brian Wheeler said that he was not anticipating any further comments from staff at this time.

“If that changes, we will let everyone know,” Wheeler said.

Among those expressing shock and frustration with Brackney’s termination was Mayor Nikuyah Walker, who took to Facebook on Wednesday evening to share her thoughts. Though Walker does not often talk to members of the media, she regularly utilizes Facebook as a means of communicating with constituents.

In posts attached to a video of poet Funmilola Fagbamila and congressional testimony from Fannie Lou Hamer, Walker said she was not sharing information because it would change the outcome but because “white supremacy is powerful.”

“Chief Brackney isn’t going to return, nor would I ask her to come back. I’m simply acknowledging how toxic this community is,” she said. “I wish I had facts and didn’t have to ‘gossip or speculate’ as our world-class twitter guru pointed out. I would appreciate receiving respect as the mayor and having been given a reason why.”

Walker also posted a five-page document titled “Departmental Investigation Executive Summary,” which appeared to be a longer, more detailed version of a press release sent out by the city last month in response to a PBA survey. The document, which is dated Aug. 9, appears to be an official report, but it is unclear to whom the report was sent.

In August, the PBA released survey data from 65 police employee respondents that indicated dissatisfaction among its members with the leadership of the city police department. On Aug. 20 the city released a lengthy unsigned response that said the PBA’s survey and the release of its results occurred during “a difficult reorganization and the recent terminations of employment of members of the city’s SWAT Team.”

This survey was conducted about a year after the city conducted its own in August 2020. Though not released publicly until Wednesday, the city’s own survey also consisted of primarily dour responses that were critical of the city police leadership.

According to the city’s August statement, an investigation revealed that in connection with training and operations of the SWAT Team, team members had been “videoing simulated sex acts, circulating nude videos of females and themselves, … videotaping children of SWAT members detonating explosives, and firing police department-issued semi-automatic weapons, at unauthorized training events,” among several other allegations.

The document posted by Walker contained expanded allegations against several named officers and argued for a united front during reform efforts.

“But, despite command’s efforts, the support of the city manager, and the many officers who have embraced reform efforts, we cannot tackle these critical issues alone,” the document reads. “We must have a unified approach to dismantling system racism and eliminating police misconduct in Charlottesville and across the nation.”

The decision to terminate Brackney’s employment also came just a day after she participated in a forum with the Center for Police Equity, a research center that analyzes police data to determine disparities in policing.

During that forum, Brackney discussed efforts to expand police data collection in an effort to be more transparent and create a more equitable policing system. It remains unclear whether the partnership or other reform efforts instituted by Brackney will continue in the wake of her termination. Representatives for the Center for Police Equity did not respond to requests for comment.

At 1:39 a.m. Saturday, officers responded to a report of multiple shots fired at 313 Second St. SE., where the Bluegrass Grill and Bakery is located.

The lawsuit, filed in October 2018 on behalf of two then-University of Virginia students, asked the Western District Court of Virginia to declare the gun act unconstitutional.

The announcement did little to clarify the reasons for either employment decision, but followed months of behind the scenes struggles that were recently brought to public attention.

Arrest made in Boylan Heights shooting

While in a bathroom in the restaurant, a patron was shot and suffered serious but non-life-threatening injuries. The bullet entered the bathroom after being fired from an adjacent bathroom.

Counsel for James Alex Fields Jr. expanded on arguments that Fields should have been tried outside of Charlottesville.

ERIN EDGERTON/THE DAILY PROGRESS Various chants are led during a noise demonstration hosted by Cville Beyond Policing on Monday, April 19 outside the Charlottesville Police Department.

Charlottesville Police Chief RaShall Brackney describes the steps her department will take after an officer’s body camera fell off during a violent arrest Wednesday evening. The Charlottesville Police Department released the arresting officer’s body camera footage of the encounter Thursday after an Instagram video of the incident surfaced. ERIN EDGERTON/THE DAILY PROGRESS