RICHMOND — Testing for COVID-19 in Virginia has lagged in the past week, even as experts and state officials tie widespread testing to the possibility of lifting public restrictions during the pandemic.

About 2,500 fewer Virginians were tested for COVID-19 this past week compared to the week prior, according to data published by the Virginia Department of Health. Over the last seven days, the agency reported 13,932 new tests, a 15% dip from the 16,447 tests the week before.

The lag of tests in Virginia matches a national decline in COVID-19 testing, a reality that clashes with statements from government and public health officials, who say that they need better data to chart a course of action around the pandemic.

Officials in Virginia acknowledged COVID-19 cases remain undercounted, while some private laboratories operating in Virginia and reached by the Times-Dispatch confirmed demand for their tests remained below their capacity.

Public health officials and private lab administrators said the dip in testing might indicate physicians are requesting fewer tests because of narrow guidance coming from the state and federal governments on who should be tested. Testing guidelines sought to prioritize the sickest patients and those most at risk when testing was limited. As testing capacity has expanded with the entry of private labs, the guidance failed to keep up.

Gov. Ralph Northam emphasized the need for testing Friday, just days after researchers at the University of Virginia projected that only 15% of COVID-19 cases in Virginia are being detected, a challenge in their work to better model the state’s outlook.

New federal guidelines on how states should go about easing public restrictions say states should only begin after a downward trajectory of new cases over a 14-day period. To use positive tests as an indicator, the guidance says, Virginia's testing volume would need to remain flat or increase over that time frame. With inconsistent testing rates in the state, it’s unclear Virginia can determine when cases have started to decline.

Public health officials in Virginia have not publicly shared a quantifiable testing goal, but on Friday, Health Secretary Dan Carey said: "We want to get to significantly higher amounts, thousands more per day to accomplish the missions that the governor has outlined."

Virginia reported 2,934 new tests on Saturday, but fewer than 2,000 tests were reported on four days last week. In neighboring Maryland, Gov. Larry Hogan said that the state hopes to reach 10,000 per day on its path to lifting public restrictions.

The Northam administration has said it is studying the state's testing capacity, but during a Friday news conference, officials said they couldn't share updates on a survey of capacity at the state's private labs, which perform an overwhelming majority of the tests in Virginia. At the same time, they announced that the state’s testing criteria for the public lab, which has a capacity of 200 tests per day, would be expanded in the coming days to include more people living and working in “congregate settings” like nursing homes, prisons, jails and homeless shelters.

“The goal is to expand public health testing,” said Laurie Forlano, deputy commissioner of population health at the Virginia Department of Health.

Virginia's lag in testing comes after weeks of overwhelming demand during the early stages of the pandemic that flooded the few laboratories that were performing them.

When Virginia first reported positive COVID-19 patients on March 8, the state laboratory had a daily capacity of fewer than 50 tests in a state with more than 8.5 million people. State officials said they were working to expand testing capacity amid a nationwide supply shortage, one that stemmed from limited capacity at the federal Centers for Disease Control and Prevention, the only entity with an approved test in the U.S.

Private labs, and those within public and private hospitals, eventually developed their own tests, which now account for the bulk of results logged in Virginia.

According to the Virginia Department of Health, eight private laboratories and four hospitals are currently able to test for COVID-19.

Crystal Icenhour, the CEO of Aperiomics Inc. based in Ashburn, said her lab’s testing capacity is roughly 2,500 tests per week, and “we’re very far from maxing out that capacity.”

“We were surprised given the fact that current estimates say there are about 300 million tests needed to be performed in the U.S. Given that mass of volume, we expected to be turning groups away,” she said.

Icenhour said part of the reason for the decreased demand can be chalked up to the initial hubbub around testing, which saw exploding demand and very few tests that took days to complete. That experience, she said, left many physicians to turn instead to clinical diagnoses for patients with mild symptoms.

State Health Commissioner Norman Oliver said many clinicians with patients showing COVID-19 symptoms may more quickly turn to a diagnosis based on their discretion instead of waiting days for the results of a test that could end up costing a patient $100 or more.

“If I see you’re showing symptoms — we’re both pretty sure you have COVID-19 — I might just send you home, ask you to self-quarantine, watch your symptoms,” he said. “Why would I saddle you with that expense? By the time the test comes back, it’s been days and the direction is the same.”

Dissuading physicians from that scenario for the sake of public health will be a messaging task for state officials, he said.

“I’m not blaming clinicians,” he said. “We need to educate and convince our providers to order these tests because we need them for public health.”

Of the labs reached by the Times-Dispatch, all said the cost of their tests was $51.31 for those covered by Medicare or a private insurance company, or around $100 out-of-pocket.

Forlano said that the state’s expanded testing criteria would cover people who are uninsured, allowing them to be tested for free through the state lab.

Compounding the situation, Icenhour said, is strict guidance from the CDC and the state about who should be tested. For weeks, the list has included only those with multiple symptoms and who are in an at-risk category, like the elderly or those with pre-existing conditions.

As testing capacity increased, the guidance to physicians remained the same.

Kimberly Gorode, a spokeswoman for Quest Diagnostics, one of the biggest laboratories in the country, declined to provide state-level data but confirmed that nationally, demand for their tests has declined.

Gorode said Quest is expanding outreach to health care providers, alerting them that the capacity exists to test lower-priority patients. Gorode said Quest, too, is advocating for the guidance around testing to be updated.

“We also support the efforts of our trade association, [the American Clinical Laboratory Association] to collaborate with public health authorities to reconsider patient prioritization schemes that were essential to direct testing to highest-risk populations when industry test capacity was limited,” she said in an email.

Icenhour said that even when the guidance isn’t binding, the message of limited testing is being followed by many physicians treating patients with milder symptoms.

Bill Miller, the CEO of the Glen Allen-based lab GENETWORx, said in an email that his lab is only 70% toward meeting its capacity of 3,000 to 5,000 tests per week, though demand is increasing. Miller said that fewer than one-third of the tests it performs are for Virginia patients.

Miller said his company is working with as many state institutions as it can, including Canterbury Rehabilitation and Healthcare, which has seen one of the deadliest COVID-19 outbreaks in a nursing home anywhere in the country.

A spokesman for LabCorp, another major national laboratory that contracts with health care providers, declined to say whether the company was seeing a decline in demand for tests. He said the company can currently process 65,000 tests per day, and has tested 650,000 people since it rolled out its test on March 5.

Without an approved vaccine, public health researchers say that widespread testing and monitoring remain the only path to a return to normality. In the meantime, the disease's outlook remains elusive.

Madhav Marathe, a researcher at UVA's Biocomplexity Institute, which modeled COVID-19 in Virginia, said its model relies on the assumption that only one out of every seven Virginians infected with COVID-19 are being tested. Marathe said it's not a "hard number," but rather, their best estimate based on evidence from here and elsewhere.

"These estimates are based on indirect information, because the testing is so sparse," he said. His team projected earlier this week that social distancing was slowing down the spread of the disease, but that a "halfway" return to normal public activity after June 10 could cause a spike and overwhelm the state's health care system by August.

That could be avoided, and the models updated, with more testing and more tracing of infected patients, said Chris Barrett, the executive director of the UVA institute behind the new modeling.

For now, he said, "I don't think we should expect life to be completely normal for a while. There is no immediate way out. No vaccine, no therapeutic treatment. This is what there is. This is it." 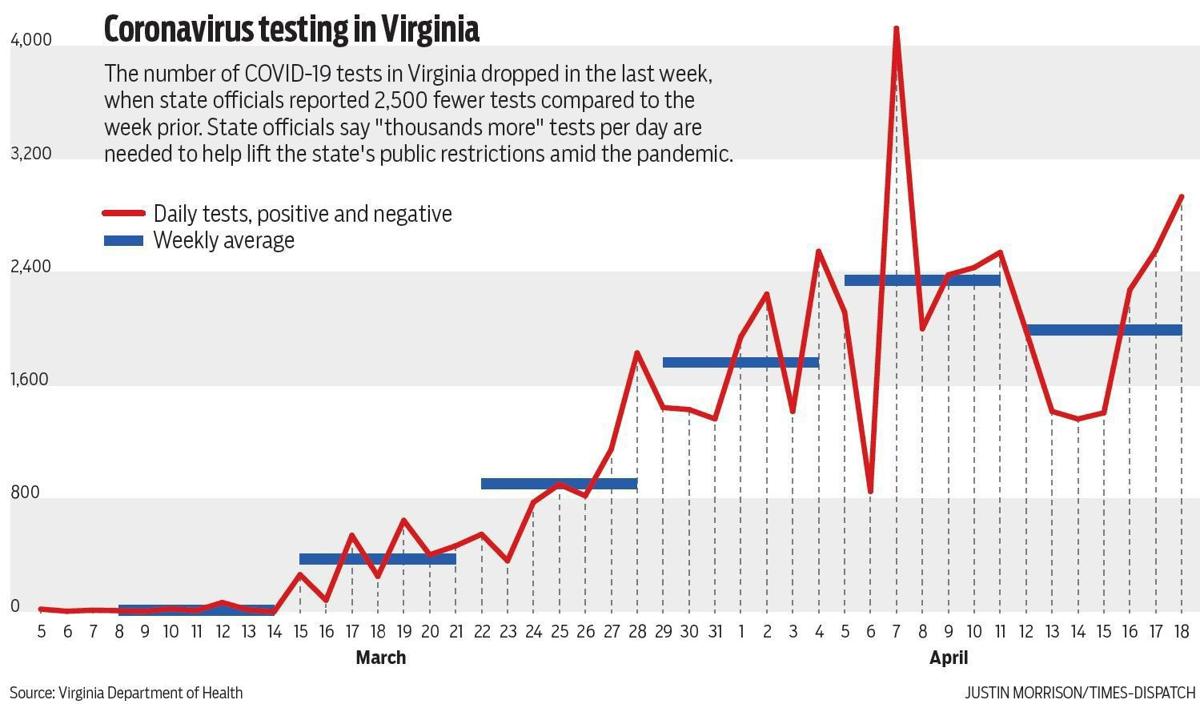 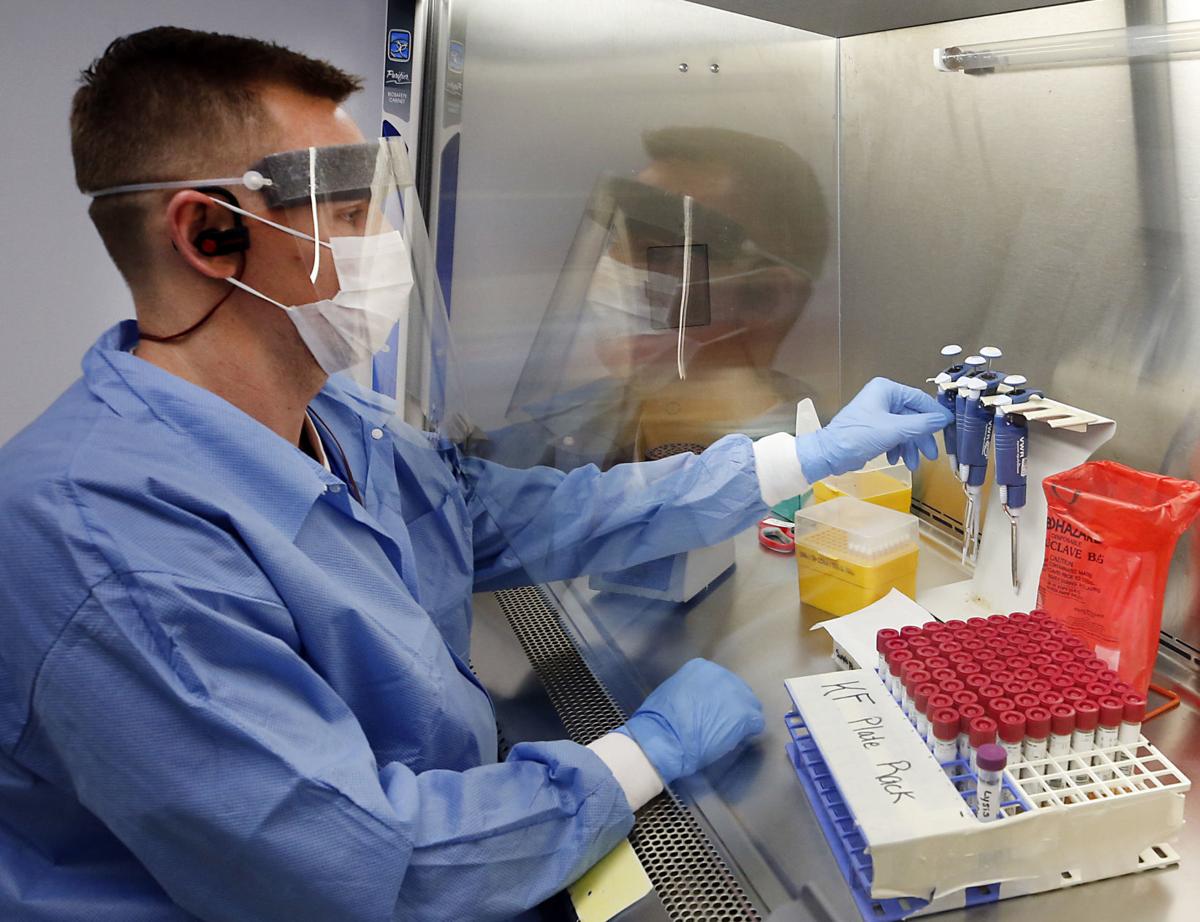 JOE MAHONEY/RICHMOND TIMES-DISPATCH Senior Medical Technologist Blake Forlines is reflected in the glass hood of a workstation while he readies a rack patient specimens (lower right) at Genetworx in Innsbrook on Monday, March 23, 2020. The company has begun testing for Covid-19, making the firm one of the first private companies to do so.