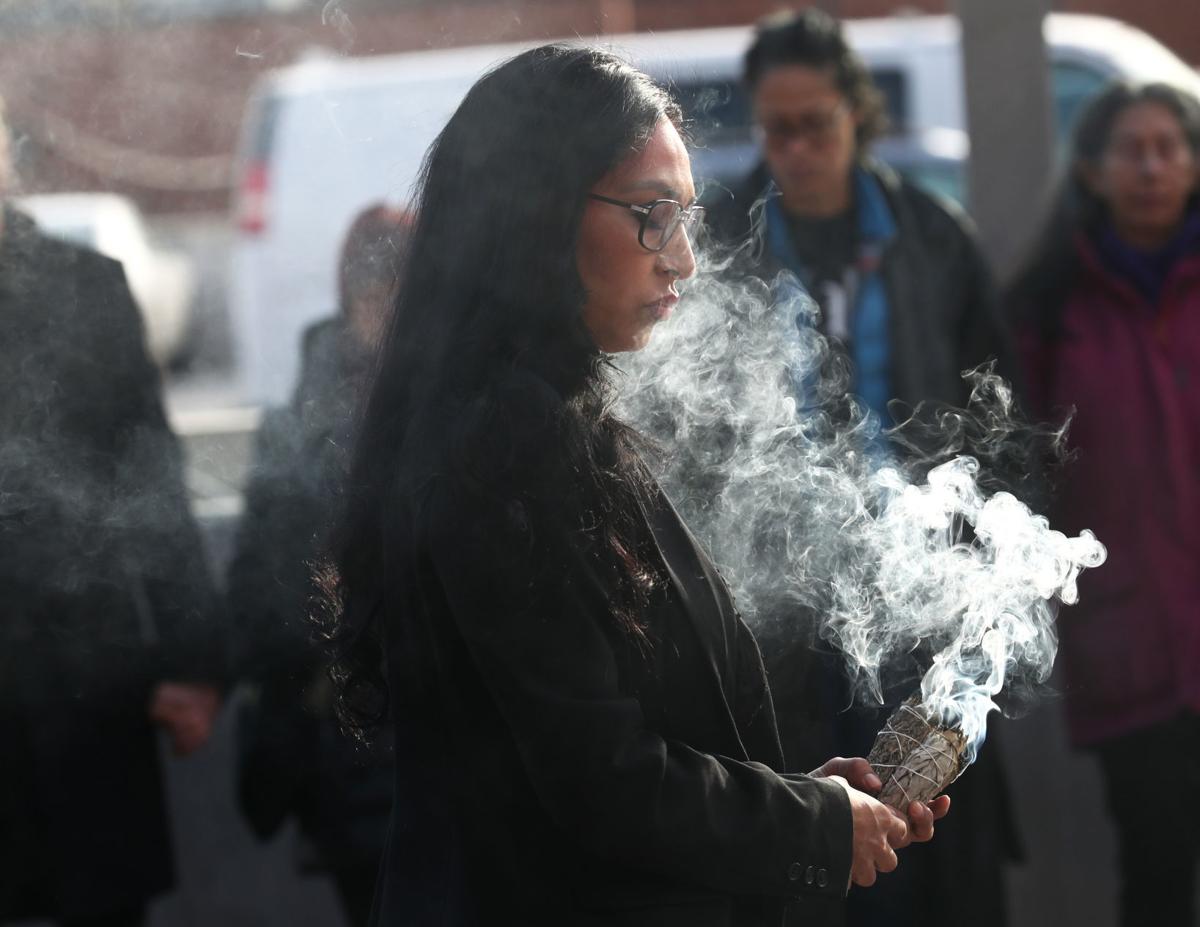 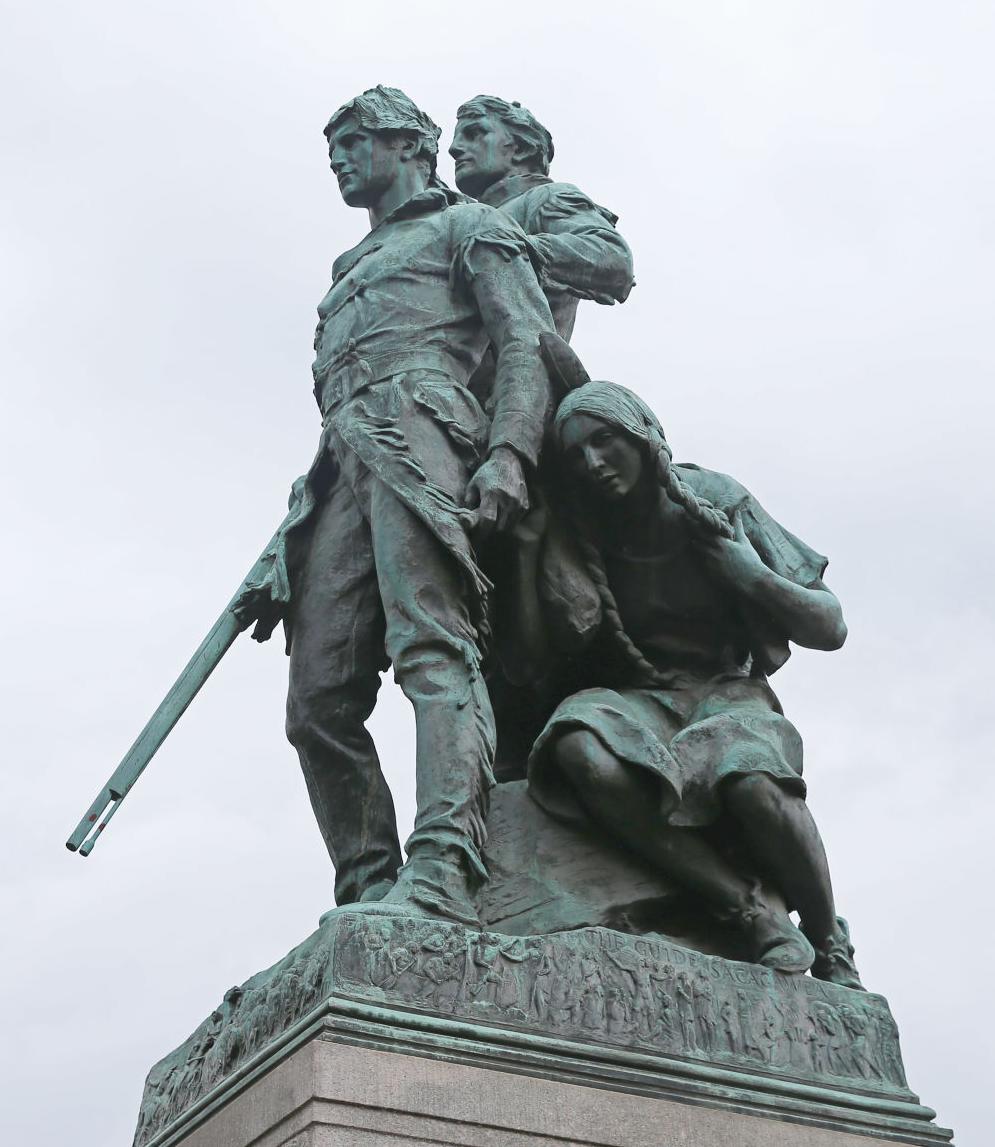 The City Council has decided to remove the statue of Meriwether Lewis, William Clark and Sacagawea that stands on West Main Street and to commission a new statue related to their expedition. 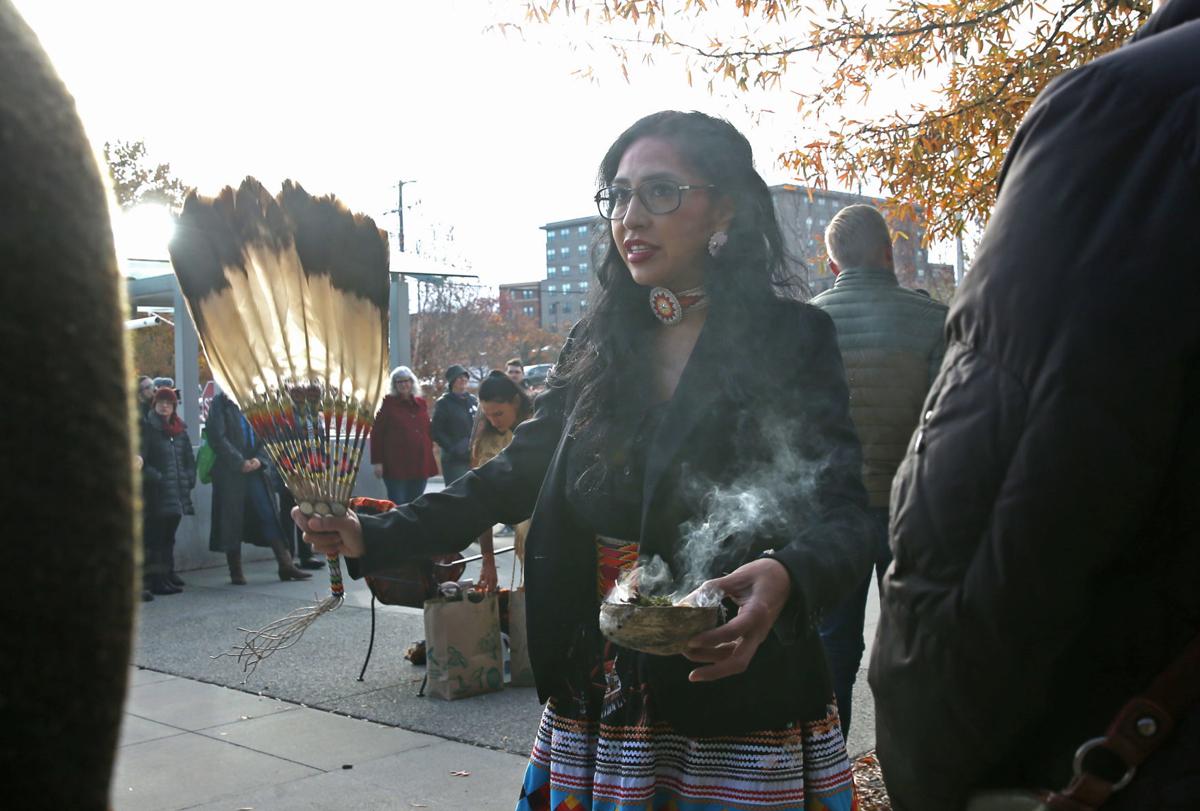 Shoshone-Bannock member Willow Abrahamson, a descendant of Sacagawea, burns sage during a smudging ceremony before a work session on Charlottesville’s Sacagawea statue at the Carver Recreation Center on Friday. RIGHT: The statue of Meriwether Lewis, William Clark and Sacagawea that stands on West Main Street in Charlottesville.

This time, Charlottesville can move a statue.

The City Council voted to direct city staff to create a plan for the removal of the West Main Street statue commemorating the Lewis and Clark expedition during a work session Friday.

The statue depicts explorers Meriwether Lewis, who was born in Albemarle County, and William Clark, accompanied by Shoshone interpreter Sacagawea.

The council approved a resolution to remove the statue and directed staff to return with a cost estimate and plan for its removal. No date was set for that presentation.

At the work session, councilors discussed the statue with Native Americans and some of Sacagawea’s descendants, who traveled to Charlottesville from Idaho.

Rose Ann Abrahamson, a descendant of Sacagawea and a Shoshone-Bannock woman, said she has seen nearly every depiction of her ancestor in the country.

Abrahamson previously came to the city in 2009 when a plaque was erected to honor Sacagawea. However, Emma George, another descendant, and Abrahamson’s children recently saw it for the first time.

“I can say for myself, it did bring shame. It made me feel sadness and worthlessness, and that’s not how I was brought up,” Dustina Abrahamson, one of Abrahamson’s daughters, said as she struggled to put her emotions into words.

George, with her voice breaking, said, “This morning I went out there to look at that statue. It did not make me feel good at all. It was humiliating.”

Jeff Werner, the city’s preservation and design planner, said the statue was made by Charles Keck and donated to the city in 1919 by Paul McIntire, who also donated the statues of Confederate Gens. Robert E. Lee and Thomas “Stonewall” Jackson and one at the University of Virginia of George Rogers Clark.

While the Confederate statues cannot be moved under state law, the Lewis-Clark-Sacagawea statue has no such protections, allowing the city to decide its fate.

“Fortunately, this doesn’t get hung up with Virginia state law. … so there is a lot more freedom at the local level,” said Councilor Kathy Galvin, who is a defendant in a lawsuit the city lost about council’s vote to remove the Confederate statues.

The Sacagawea statue is in a complicated bureaucratic position because it is a central point of the West Main Streetscape project.

As part of the project, the statue was proposed to be moved about 20 feet southwest to an area that will be transformed into a pocket park. City staff estimated the shift would cost about $50,000, which is included in the total cost of the streetscape project.

The relocation was part of the first phase of construction, expected to start in 2021.

Werner and City Attorney John Blair said that although the statue is part of the project, which has received state funding, the move can occur without the state’s input.

The streetscape project is funded through the Virginia Department of Transportation’s Smart Scale program. Under that system, VDOT administers projects.

The streetscape project will be minimally impacted by the statue’s departure. A newly commissioned statue could take its place or the small park could feature additional greenspace.

Councilor Mike Signer asked what would be an appropriate way to display the statue at the Lewis and Clark Exploratory Center in Albemarle County, which officials have said is interested in taking it.

Rose Ann Abrahamson said it should be displayed with a correlating exhibit highlighting the statue’s history and offensive depiction of Sacagawea and describing her contribution to the expedition.

“In 1919, Meriwether Lewis and William Clark were Virginia’s heroes, but Sacagawea was a woman and a Native American,” she said.

Willow Abrahamson, another of Rose Ann Abrahamson’s daughters, said the statue was created in a time where Native American culture was under attack. She cited U.S. Brigadier Gen. Henry Pratt, who was in charge of a Native American prisoners of war camp in the late 1800s.

Pratt drew a national spotlight in the early 1900s by saying “kill the Indian … save the man” to describe his belief that the government should sponsor cultural assimilation on Native American reservations, according to National Public Radio.

“At this time in history, when this statue was developed, that was a time when my people, indigenous people, were not viewed as human beings,” Willow Abrahamson said.

Monacan Chief Kenneth Branham said the statue doesn’t depict “true history” and Sacagawea’s role in the expedition. He was visibly frustrated that the statue remains even though Friday wasn’t the first time it’s been discussed.

“I do feel sorry that we have to come here today to do something,” he said. “We have been here several times about this statue and every time the same things come up. ... I don’t want to be here in 20 years and come back with people asking the same thing.”

The resolution also directs staff to present a proposal for a new statue in conjunction with Native Americans.

Dustina Abrahamson said Lewis and Clark were “good men” and should be depicted in a new statue alongside Sacagawea as equals.

One public comment speaker at Friday’s meeting mentioned York, an African American slave who was passed down to Clark by Clark’s father and joined the group’s expedition. They recommended including him in a new statue to incorporate another forgotten person of color in the expedition.

Mayor Nikuyah Walker said “it would be a challenge for me” to keep Lewis and Clark in the statue because of the historical mistreatment of African Americans throughout the country’s history.

Willow Abrahamson said her motivation is to show equality.

“I think the main thing and the point we want to get across is — not one group deserves more representation than another,” she said.

City Manager Tarron Richardson said officials could get quotes on removal within a month.

Anthony Guy Lopez, who is an enrolled member of the Crow Creek Sioux tribe in South Dakota, reminded the group that “our work is not done” and referenced a push to remove the statue of George Rogers Clark at UVa.

Walker and Councilors Wes Bellamy, Kathy Galvin and Heather Hill voted to approve the resolution. Signer, who was present for most of the meeting, left before the vote due to scheduling conflicts. Councilor-elect Lloyd Snook also attended the work session.

Prior to the meeting, officials joined the Native Americans in a smudging ceremony, a spiritual cleansing ritual. After the vote, the Shoshone-Bannock and Monacan representatives exchanged gifts with each other and councilors.

The Shoshone-Bannock representatives will host a presentation at UVa on Saturday to discuss the expedition from a Native American viewpoint. The event also will include a dance ceremony.

The presentation is scheduled for 11 a.m. at Nau Hall, Room 101. It is free and open to the public.

Opinion/Letter: Sacagawea deserves to be honored as Lewis and Clark equal

I was gladdened by the story of the Charlottesville City Council and the inclusive and sensitive way it appears to be dealing with the decision to move the statue of Meriwether Lewis, William Clark and Sacagawea.

The City Council approved payment for a descendant of Shoshone interpreter Sacagawea and three other Native Americans to attend the Nov. 15 work session, at a cost that won't exceed $10,000, according to the mayor.

The City Council has decided to remove the statue of Meriwether Lewis, William Clark and Sacagawea that stands on West Main Street and to commission a new statue related to their expedition.

Shoshone-Bannock member Willow Abrahamson, a descendant of Sacagawea, burns sage during a smudging ceremony before a work session on Charlottesville’s Sacagawea statue at the Carver Recreation Center on Friday. RIGHT: The statue of Meriwether Lewis, William Clark and Sacagawea that stands on West Main Street in Charlottesville. 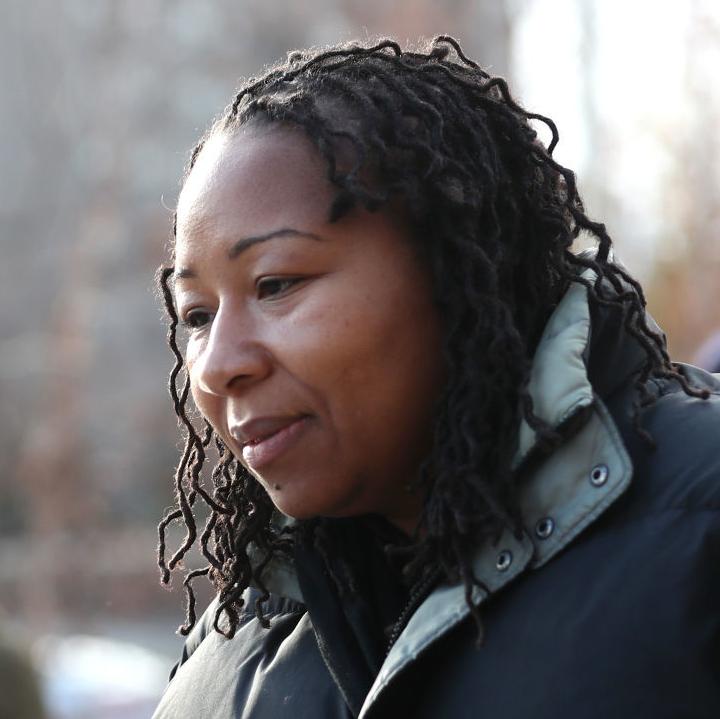