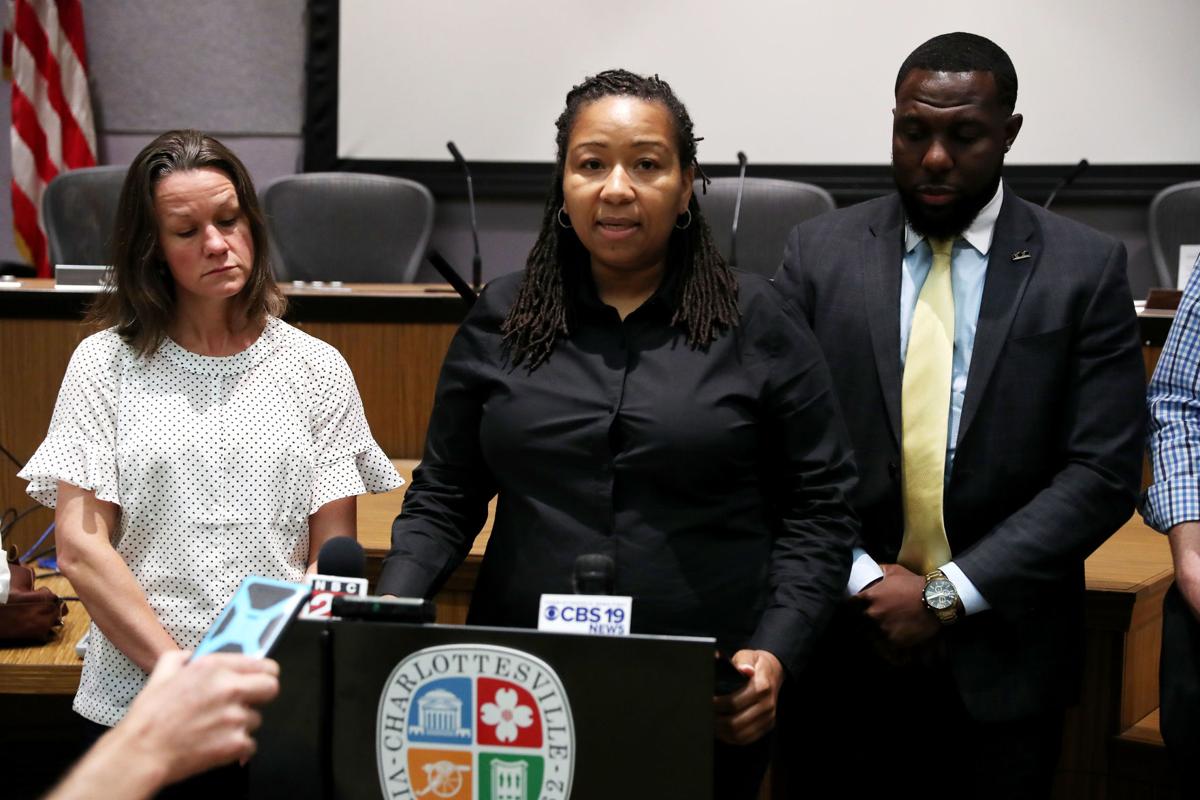 Charlottesville Mayor Nikuyah Walker announces on May 25, 2018, that the city will not renew City Manager Maurice Jones' contract. 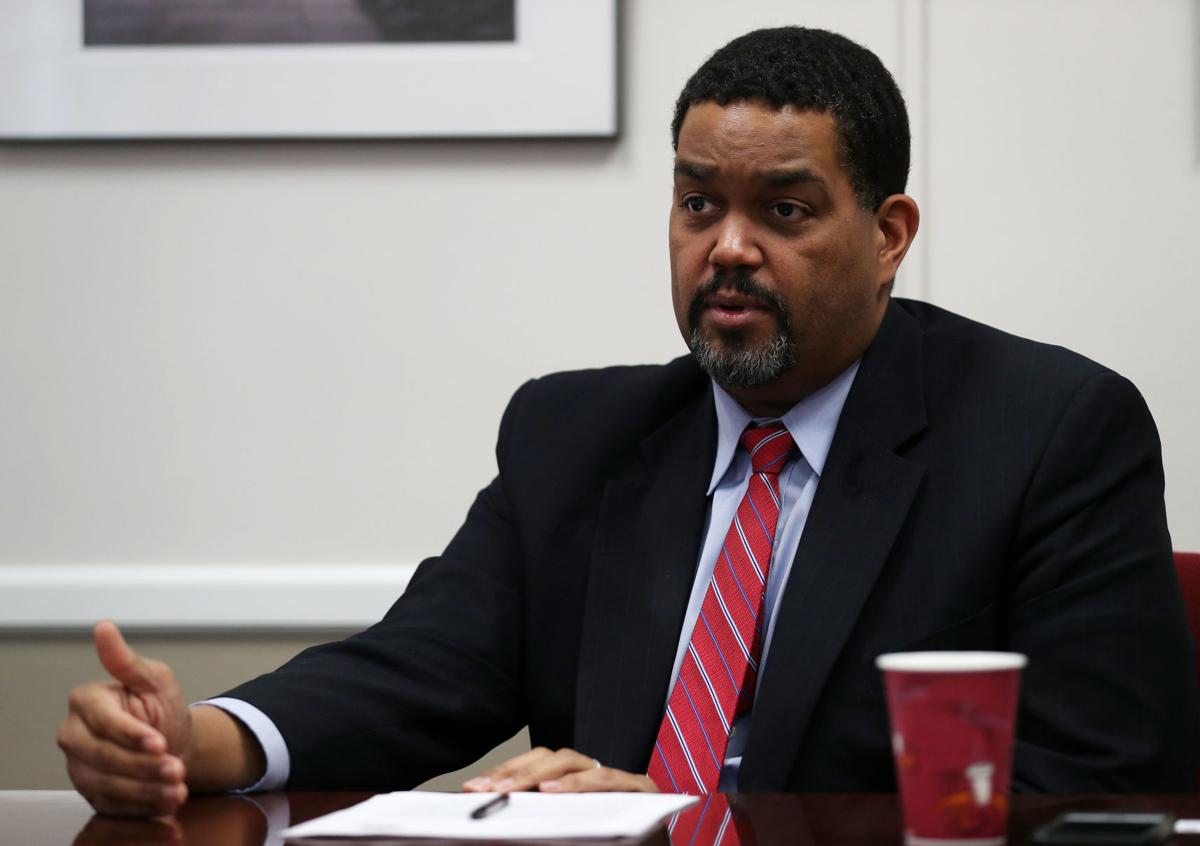 A week after describing a disconnect between the City Council and City Manager Maurice Jones, Mayor Nikuyah Walker, alongside her council colleagues, announced that Jones’ contract, which ends Dec. 7, will not be extended or renewed.

Friday’s announcement was made after a closed council meeting held just four days after the body met in another closed meeting for Jones’ semi-annual performance review. The council held a similar closed meeting last month.

“It has become clear to us that what our city needs at this critical juncture is a fresh perspective and a new direction,” Walker said, reading from a prepared statement.

“Therefore, council has decided not to renew the city manager’s contract and will move forward with the task of working with the community, our employees and all of our stakeholders to select a new leader for the city of Charlottesville.”

Walker said the council plans to continue working with Jones through Dec. 7, but that Jones and the council may mutually agree on an earlier separation date.

Councilors declined to comment on their decision after the announcement.

According to a written statement given to reporters afterward, Jones, who was not present for the brief news conference, said it has been an honor to serve the city over the last 17 years.

Jones has served as city manager for the last eight years, but had a career in City Hall prior to being promoted to the top administrative position.

Jones became the city’s communications director in 1999. After leaving to become director of development at the University of Virginia’s Miller Center Foundation several years later, he came back to City Hall as assistant city manager in 2008.

Two years later, he was named interim city manager after Gary O’Connell announced his retirement. Before the end of 2010, the council chose Jones to be O’Connell’s successor.

In his statement, Jones lauded several initiatives that were established during his time as city manager, such as the Growing Opportunities workforce development program, the construction of The Crossings at Fourth and Preston and the public investments in the city’s affordable housing fund.

“We have accomplished quite a deal together during my time as city manager,” Jones said.

“Charlottesville is a special place,” he said. “We have our challenges, like all communities, but we also have the resources, talent and compassion to provide solutions to these complex problems.”

“It is my sincere hope that our city will come together as one to address them. I certainly look forward to continuing our important work together during the remainder of my time with the city.”

With less than seven months left in his contract and two new councilors on board following last year’s election, the recent series of performance evaluations had led to questions about whether the council wanted to retain Jones as the city’s top executive.

Fallout from last summer’s ill-fated white supremacist rally — which resulted in three fatalities, dozens of injuries and several high-profile resignations from City Hall — has lingered. The city’s searches for a new communications director, city attorney and police chief only added to the intrigue surrounding Jones’ future.

Walker’s recent comments about Jones and the search for a new police chief, which resulted in Jones earlier this month recommending RaShall M. Brackney for the post, also provided more fodder for speculative observers.

“Everybody’s kind of running around doing their own thing; there’s a major power struggle,” Walker said about city government in a Facebook Live video published May 16.

The city follows what’s known as a “weak-mayor” form of government. The council appoints a city manager who is in charge of all municipal operations, while the mayor, chosen by the five-member council, is responsible primarily for assembling the council’s agendas and presiding over its meetings. The council altogether is responsible for policymaking.

But Walker isn’t the only one to have expressed frustration with the city manager in the last year.

Within three weeks of the Aug. 12 rally, a leaked council memo described frustration with how Jones and other city officials handled the event.

The memo showed that the councilors wanted answers for the police’s failure to maintain order that day and asserted that city officials did not do enough to assuage the public’s fears and concerns before the event.

Jones later responded to the memo, rebutting some of the assertions. He also said that then-Mayor Mike Signer threatened to fire both him and then-Police Chief Al Thomas because they did not let Signer enter a command center during the rally.

Several months later, the council conducted a performance review with Jones in two different closed meetings. The Daily Progress later obtained a draft of a work plan for Jones that was created during those meetings.

According to the draft, the council requested Jones create regular reports on the progress of certain initiatives, as well as clear recommendations from staff on how to proceed on several projects and developments in the city.

Other objectives in the draft included the development of an overall communications strategy for recovery efforts following last year’s traumatic events.

After Monday’s council meeting, Councilor Kathy Galvin said the work plan had been the topic of discussion in recent performance evaluation meetings with Jones.

“We’re reviewing the work plan to see whether it’s being met,” she said Monday in response to questions about Jones’ contract and the closed meeting earlier that evening.

During Friday’s news conference, Walker said the council will work to ensure the public is updated on a regular basis with new information about the search for a new city manager.

“We are committed to creating a healthy and responsive organization that will continue the challenging and rewarding work of fostering a safe and equitable environment for all who live here,” she said.

“Council thanks Mr. Jones for his years of dedicated service to the city of Charlottesville, and we wish him all the best in his future endeavors.”

A developer has asked for rezoning so the company can build a 250-unit apartment complex on West Rio, with promises that some units would be affordable for those with lower incomes.

The school system is planning to move quickly on the search process to replace the departing directors. The goal is to have new directors selected before the end of the school year, per the news release.

A proposed trash and recycling station in Keene was deemed consistent with Albemarle County’s Comprehensive Plan by the county’s Planning Commission.

"It’s not like people are going to stop wanting to move to Albemarle County, so capacity is always going to be an issue.”

“The current mask this policy has created an untenable situation for all, especially for students with disabilities."

Charlottesville Mayor Nikuyah Walker announces on May 25, 2018, that the city will not renew City Manager Maurice Jones' contract.