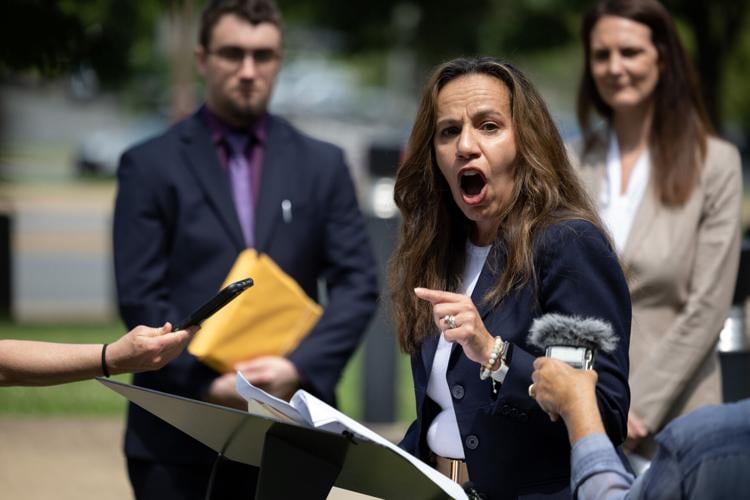 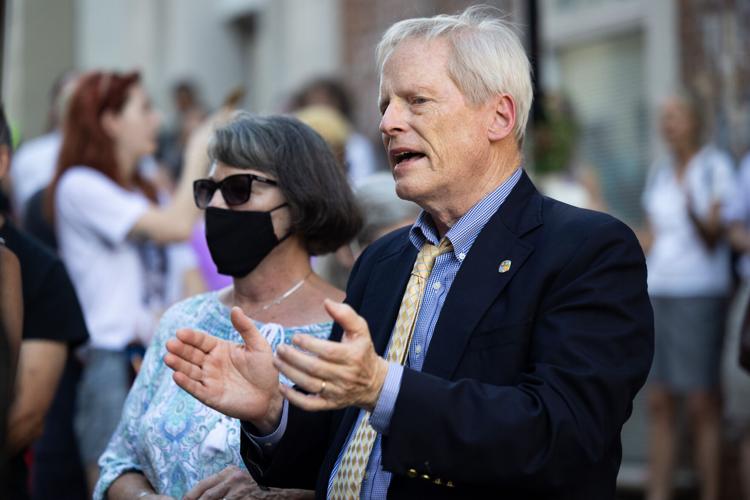 Mayor Lloyd Snook sings with the crowd on Heather Heyer Way during a “Unite the Light” walking vigil on Friday, Aug. 12.

The new policies require employees to be honest, regulate their social media use and offers guidance for off-duty behavior. They do not apply retroactively.

Groat said he entered the Capitol as an “independent journalist,” but The Daily Progress could not find any bylines or photo credits attributed to him. Capitol police officers asked Groat and other rioters to leave and Groat eventually exited the building.

Many Charlottesville residents expressed outrage that Groat was still on the city’s payroll after his appearance in the riot became public in June. Groat, an information technology analyst for the city’s police department, sheriff’s office, fire department and rescue squad, apologized to the city for being part of the insurrection in August, interim City Manager Michael Rogers said at a city government meeting.

In August, the city announced Groat would keep his job.

On Oct. 13, 2020, Groat pleaded guilty to misdemeanor reckless driving and the firearm charge was dropped. Court records show he was required to turn in his firearms to the Albemarle County Police Department and was prohibited from purchasing, carrying or transporting them.

Also, former city Police Chief RaShall Brackney alleged in a lawsuit against the city that Groat misled his boss when he requested time off for Jan. 6, 2021.

On Aug. 1, interim City Manager Michael Rogers told city councilors that Groat, whom he did not name at the time, had been interviewed by the FBI in connection with his presence in the Capitol on Jan. 6, 2021. No charges had been filed against him.

“He’s been interviewed by the FBI three times over the past year and a half,” Rogers told the council at that time. “The employee reports no further contact from the FBI.”

Rogers said Groat could not be fired under the previous regulations because he had not been charged with “criminal activity.”

Two legal scholars contest that opinion. It’s “completely wrong” that city officials could not discipline Groat because he had not been charged with a crime, University of Virginia law professor George Rutherglen said.

“Without a contract, as long as the employer doesn’t discriminate, they can fire you for whatever they want,” said Sharona Hoffman, a law professor at Case Western University and a former attorney for the Equal Employment Opportunity Commission.

City personnel are employed at will, meaning they don’t have a contract.

“They’re probably a little bit nervous, because it’s problematic to fire an employee just for being arrested or questioned because that has a disparate impact on minorities,” Hoffman said.

“Part of the problem is that that was actually known in January 2021. For whatever reason, the city imposed some form of discipline on him that did not include terminating him,” said Snook, who is also a lawyer.

Under the new policy, dishonesty is prohibited including “false statements that are intended or could reasonably be expected to damage the integrity or effectiveness of the city government, city programs, or city employees.”

City employees are allowed to participate in political activities—like marching in a peaceful protest, for example—if that person is off the clock and out of uniform. However, out of office behavior that “undermines close working relationships” or “impairs discipline or harmony among co-workers” is not allowed.

The personnel policy had not been touched in 15 years. Snook blamed the review’s delay on other, unexpected issues that city officials have had to confront, like proposed housing development along the Rivanna River. Still, the policy was overdue for an update.

“That’s a long time. If I were trying to prescribe something, I would say probably every three years it ought to be at least reviewed,” Snook said.

The Daily Progress obtained the city’s previous personnel regulations via a Virginia Freedom of Information Act request. That policy allowed for disciplinary action ranging from an oral reprimand to termination “whenever employee performance, attitude, work habits, or personal conduct on the job falls below a desirable level,” but does not reference behavior off the job.

The new policies ask that a city employee “upholds a standard of conduct that reflects positively on the City of Charlottesville and does not engage in conduct during working hours that would undermine the operations of the organization.”

The policy hadn’t been reviewed in a decade and a half in part because Charlottesville has not always had a human resources director.

“The [Human Resource] directors we have had over the last 15 years for whatever reason haven’t done it. I don’t know. I wasn’t part of the government,” Snook said. “We’ve had an HR director since May. That person has had to deal with a lot, dealing with wage and salary issues. We have 70 open positions.”

A plan to build a 60-unit apartment complex in the grassy backyard of a church near the U.S. 250 Bypass earned a 4-1 vote Monday to move forwa…

The Albemarle County Fire Marshal’s Office is currently investigating the cause of the blaze.

For shooting an acquaintance a year and a half ago, 33-year-old Alexander Leon Rodgers will serve six years behind bars, a judge ruled Thursday.

5 charts that show where home sales are headed in Virginia

Are prices headed up or down? Where are the hotspots for buyers and sellers? Find out with these charts and graphs, updated weekly.

Police reveal ID of Philly slain 'Boy in the Box'

Police reveal ID of Philly slain 'Boy in the Box'

Mayor Lloyd Snook sings with the crowd on Heather Heyer Way during a “Unite the Light” walking vigil on Friday, Aug. 12.