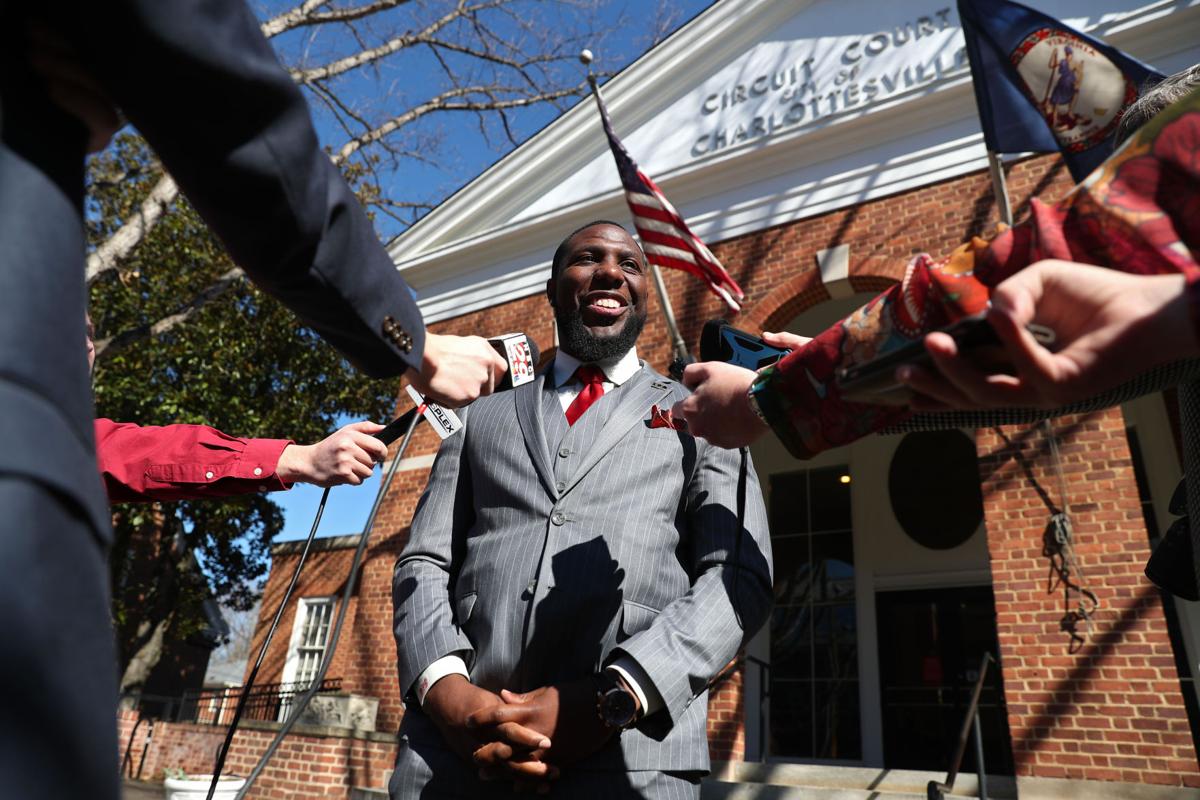 Wes Bellamy talks with reporters outside the Charlottesville Circuit Court after a hearing on Jason Kessler's petition to remove Vice Mayor Bellamy from city council on Wednesday, March 8, 2017, where the case was dismissed. Photo/Ryan M. Kelly/The Daily Progress 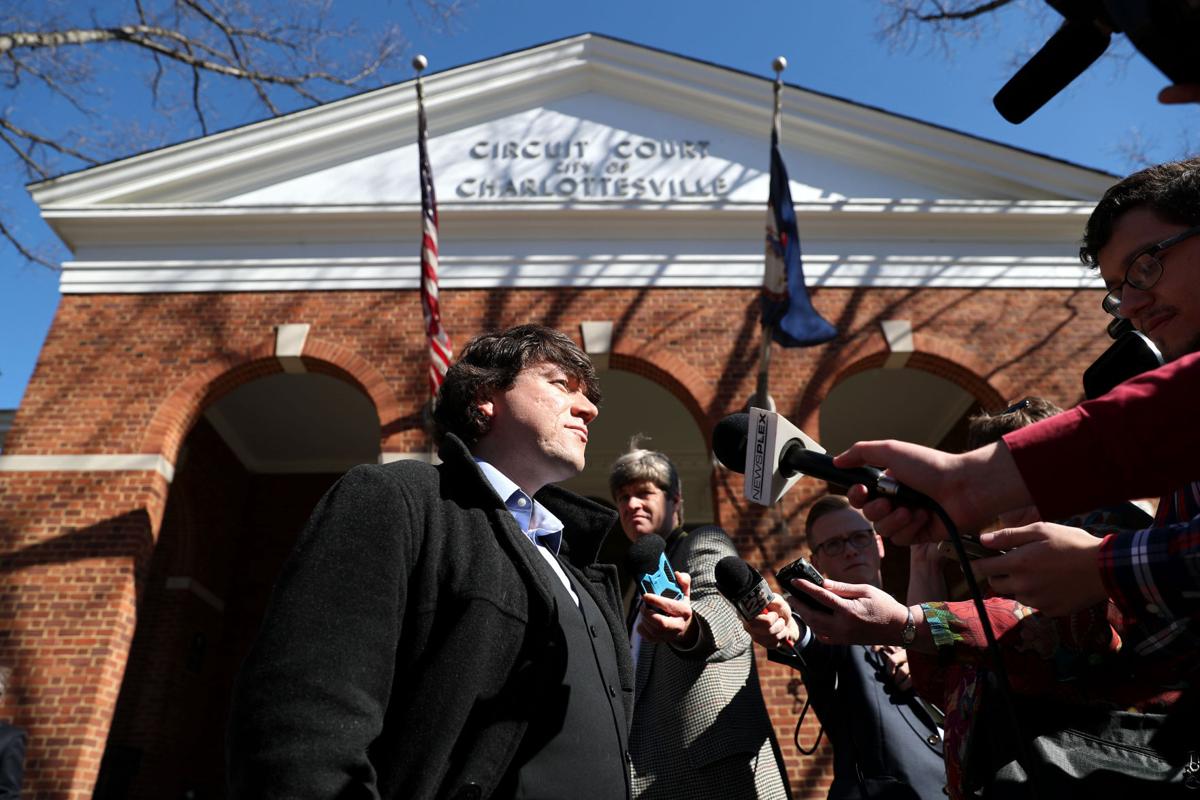 Jason Kessler talks with reporters outside the Charlottesville Circuit Court after a hearing on his petition to remove Vice Mayor Wes Bellamy from city council on Wednesday, March 8, 2017, where the case was dismissed. Photo/Ryan M. Kelly/The Daily Progress

A Charlottesville Circuit Court judge has dismissed a legal petition to remove City Councilor Wes Bellamy from office after the special prosecutor appointed to the case determined that the petition did not have enough signatures for a court to consider the complaint.

Doucette also said the right-wing provocateur and blogger’s petition, which alleges that Bellamy misused his office because tweets he wrote several years ago seem to display a prejudice against certain constituents, did not provide enough evidence to substantiate those claims.

The judge ruled in favor of Doucette’s motion to non-suit, which dismisses the case but allows Kessler or anyone else to submit a new petition. Any new petition to seek Bellamy’s removal, however, would need at least 1,580 signatures.

Addressing media outside the courthouse following the hearing, Doucette said he was unable to obtain guidance from case law or the Office of the Attorney General.

In his motion, Doucette said he had to turn to the “rules of statutory construction,” which means court officials must not “add” or “ignore” the words in state statutes.

Drawing upon his own interpretation of the state code, as well as opinions from other attorneys he said he trusts, Doucette said the code requires that petitioners must obtain 10 percent of the “total number of votes cast at the last election for the office that officer holds.”

“Had the General Assembly meant the total number of voters, they would have said that,” his motion said. “A conclusion that 1,580 signatures are needed on the petition is the closest and truest interpretation to the words contained in Code Section 24.2-233.”

According to the petition, Bellamy received 4,688 votes in the 2015 City Council election. Election records show that 15,798 votes were cast in the election. In that election, three City Council seats were open, allowing each voter to cast as many as three votes.

“I counted the signatures on the petition … the number I came up with was 597. That was nowhere near close enough to go forward,” Doucette said after the hearing.

Anyone wanting to file a new petition, Doucette said, would need to restart the whole process and recollect any of the signatures that were previously obtained.

Immediately before the hearing, Kessler approached Doucette and asked whether he has “respect” for the nearly 600 people who had signed the petition.

Doucette later said he felt that he had been disrespected by Kessler, who mispronounced his name with a confrontational tone.

“He said some things to me, and I’m not going to put up with disrespect. But we talked after the meeting and he seemed to calm down, and he seemed to understand what I was saying to him,” Doucette said.

After the hearing, Kessler said he disagrees with Doucette’s interpretation of state code.

Kessler said he will consider an appeal of the decision, but that he might not try to file a new petition.

“I’m kind of ready to move on from this. We have some other investigations of City Council members that are ongoing which are fresher and more interesting to me at this point,” he said.

Kessler is expected to appear in a city court again on April 6. He faces a misdemeanor assault charge stemming from a January incident in which he said he punched a man in self-defense. Kessler said the man accosted him while he was collecting signatures for his petition. A judge last week dismissed an assault charge filed against Kessler's alleged assailant. A prosecutor in that case said video evidence showed Kessler was not assaulted.

After the hearing, Bellamy said he was relieved the case has been dismissed.

Asked whether he’s concerned that another petition for his removal could be presented to the court, he said: “If this is how they choose to use their time, so be it. How I’m going to use my time is to continue to work and do what’s best for this city and the young people across this area.”

Kessler’s campaign to remove Bellamy from office began late last year after he published on his website several dozen offensive tweets Bellamy had written between 2009 and 2014.

Most of those tweets, Kessler and others have said, displayed contempt for white people, women and homosexuals and, in one specific tweet, condoned the performance of a sexual act on a sleeping woman.

Kessler has said the tweets, Bellamy’s recent vote to remove a statue of Confederate Gen. Robert E. Lee and a call to boycott the restaurant of a University of Virginia lecturer who criticized the Black Lives Matter movement last year are evidence that Bellamy is a “black supremacist” who has misused his office.

In Doucette’s motion, he addressed the concerns about the tweets, saying he does not think they constitute a misuse of office, as they were written prior to Bellamy’s election to the City Council and that they fail to meet the legal threshold for political misconduct.

“At this time, the removal petition inadequately explains” a link between the tweets and any material evidence that Bellamy’s actions have amounted to “misfeasance or malfeasance in office,” the motion said.

“You have to show a link between misconduct and the inability to carry out the responsibilities of the office,” Doucette said. “I’ve talked to Mr. Kessler about that, and if he so chooses to refile, he’s going to have to allege facts that lead to certain legal conclusions, not just say this is wrong.”

“The fact that you disagree on a particular vote or certain topic isn’t in and of itself a ground for removal,” Doucette said. “Maybe it’s grounds for not re-electing a person, but it’s not grounds for removal — it’s a very high standard, and it’s not encouraged in Virginia.”

Some local activist groups have criticized Kessler’s actions as racially motivated and evidence of support for white ethno-nationalism.

After the hearing, Pam Starsia, Bellamy’s attorney and an organizer with SURJCville, a local social justice advocacy group that has been critical of Kessler, labeling him a “white supremacist,” said she thinks Kessler’s campaign to remove the councilor from office is a “modern-day lynching.”

“Wes Bellamy is not a perfect man, but he’s out there working every day to make this city a better place,” Starsia said.

“This action from the beginning was a racially motivated, targeted act of terror against our only elected black official,” she said, adding that Kessler hasn’t seemed to target two other city councilors who voted to relocate the Lee statue from the eponymous downtown park.

Kessler has said he thinks Councilors Kristin Szakos and Bob Fenwick also could be petitioned for removal from office because they voted to remove the statue, an action that Kessler said he thinks is illegal.

Kessler said Wednesday that there could be more evidence that Bellamy has misused his office, but his investigation of the councilor recently hit a roadblock.

When asked about a statement in Doucette’s motion that said Kessler submitted a Freedom of Information Act request for more information about Bellamy, which city officials told him would cost approximately $1,200, Kessler charged that those fees were meant to prevent him from building his case against the councilor.

Shortly thereafter, he sent an email to city employees, encouraging them to submit complaints about Bellamy and to join a “class-action lawsuit” against Bellamy for “discriminating” against city employees and creating a “hostile work environment.”

Emails that Starsia shared with reporters Wednesday show that John Heyden, a city resident who also has been critical of Bellamy and the entire City Council, made a request on Feb. 24 for “any complaints about [Bellamy’s] conduct made by any city employees or citizens up to the present time.”

Miriam Dickler, the city’s spokeswoman and FOIA officer, said Wednesday that Kessler has not recently submitted any FOIA requests about Bellamy.

She said she was not aware of whether Heyden was associated with Kessler or his newly formed political advocacy group, Unity & Security for America.

Starsia said the FOIA request was a “fishing expedition.”

The email chain shows that Dickler requested that Heyden consider narrowing the request to save city officials’ time in compiling the information.

After declining to narrow the request beyond asking the city to search for any complaints about Bellamy that may have been sent to any city official or office from Nov. 1 to Feb. 24, Dickler wrote that fees could be incurred because of the time it would take to review whether any of the city’s more than 900 employees had submitted or received a complaint.

On Friday, Dickler told Heyden that a response to his request would cost $1,195.50, potentially more after providing the response — which is permitted by the state’s FOIA law, she said.

Dickler said she came to that total by estimating how much time it would take for multiple city officials to review the “volumes of records” that might contain Bellamy’s name, and to determine what is relevant to the request.

“I don’t know why it costs so much,” Kessler said Wednesday. “I guess there’s a lot of information there.”

Dickler said Kessler’s allegation that the city is obstructing his investigation is “patently false.”

Family of bears enjoys a playful bath in Colorado

Family of bears enjoys a playful bath in Colorado

Police said the crowd quickly dispersed with no further incidents after authorities arrived.

Wes Bellamy talks with reporters outside the Charlottesville Circuit Court after a hearing on Jason Kessler's petition to remove Vice Mayor Bellamy from city council on Wednesday, March 8, 2017, where the case was dismissed. Photo/Ryan M. Kelly/The Daily Progress

Jason Kessler talks with reporters outside the Charlottesville Circuit Court after a hearing on his petition to remove Vice Mayor Wes Bellamy from city council on Wednesday, March 8, 2017, where the case was dismissed. Photo/Ryan M. Kelly/The Daily Progress