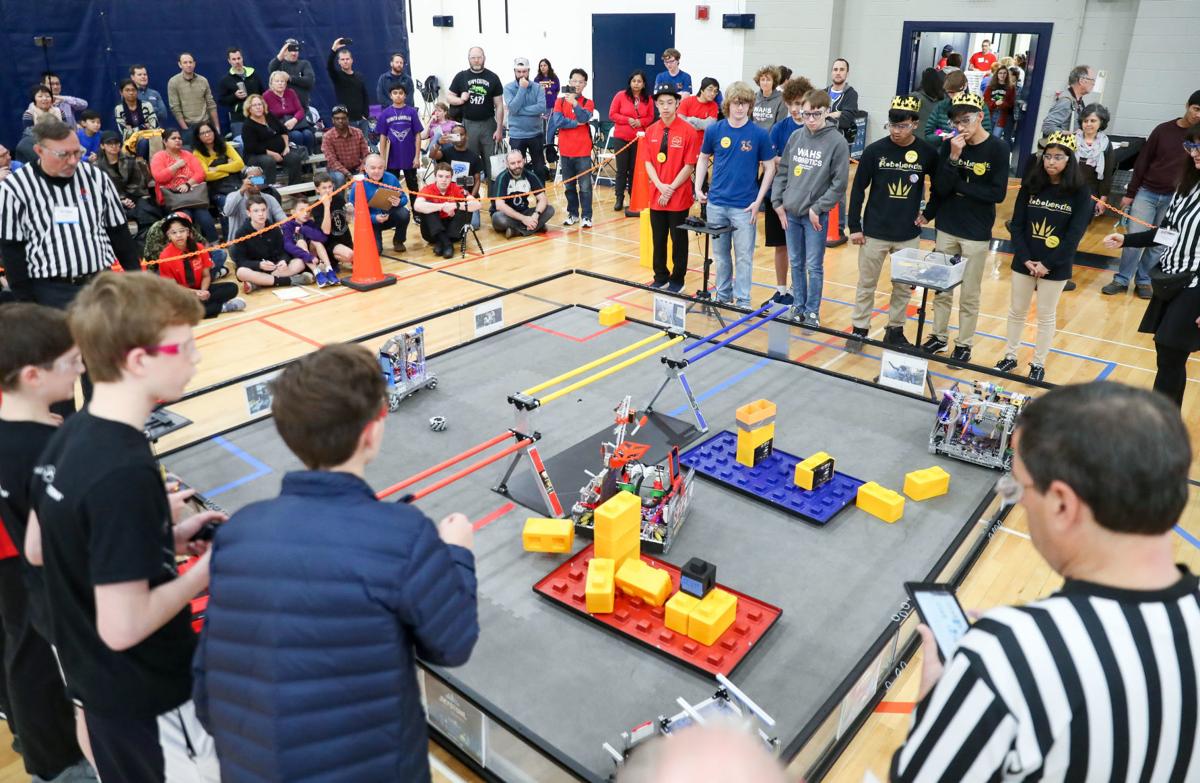 Teams participate in match play during the FIRST Tech Challenge Charlottesville qualifier Saturday at the University of Virginia. The event is sponsored by Micron and hosted at the UVa School of Engineering. Find more photos at DailyProgress.com. 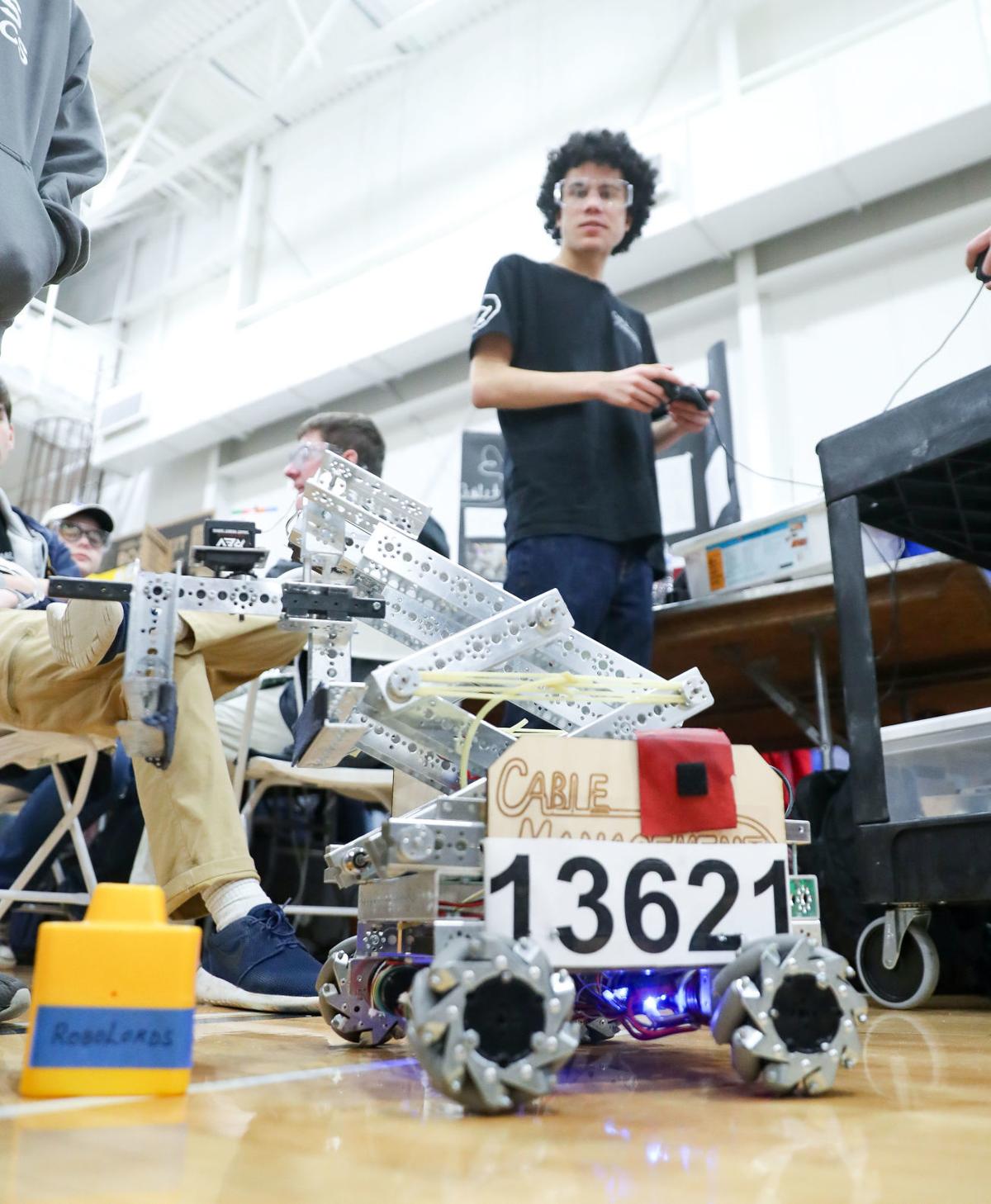 Zach Dellimore from the Cable Management team at Western Albemarle practices with his robot during the FIRST Tech Challenge Charlottesville qualifier Saturday at the University of Virginia. The event is sponsored by Micron and hosted at the UVa School of Engineering.

Before the robots could duel Saturday at the University of Virginia, Jay Gardner, clad in fleece, cow-spotted pants and an American flag shirt, wanted to hear if the teams were ready.

“Are you ready?” he asked the four teams about to compete. They responded with cheers of affirmation.

With that, the match began and the four team’s robots started moving big yellow Lego blocks around the 12-foot-square field to score points.

Inside UVa’s Slaughter Recreation Center, 33 middle- and high-school teams put their robots to the test, each hoping to qualify for the FIRST Tech Challenge state championship in February at Atlee High School in Mechanicsville. Random teams were paired up to compete as alliances, before advancing and competing against a new set of teams.

Gardner, a junior at Albemarle High School, and his team, Triforce, punched their ticket to state in December. The team volunteered to emcee Saturday’s event, hyping players up beforehand and providing play-by-play commentary.

This is Gardner’s sixth year of robotics competition. He said he likes meeting people and seeing the spirit they have for robotics.

“We want to do as best as we can and have a lot of fun,” Gardner said of his team’s goals for the season.

The FIRST Tech Challenge was created in 1989 to get children interested in science and technology. Each year, students from across the country team up to code and build robots to handle specific tasks.

The top five teams at Saturday’s contest advanced to state, and Virginia students have two more chances this season to qualify.

The day didn’t quite go as planned for BACON, the Charlottesville High School robotics team. They placed 31st and had trouble with the robot’s color sensors.

Abigail Paquette, sophomore at CHS and co-leader of the team, said the team worked during the competition to fix the problem.

Still, she and her teammates were having fun.

“It’s fun to see the accomplishment,” she said. “We started with nothing.”

Elijah Witt, a sophomore at Western Albemarle High School, was happy that his team’s robot worked. His team finished sixth.

“It’s nice to see it doing something,” Witt said.

Witt and the other students making up Her Majesty’s Engineering have spent countless hours after school building their 18-inch robot, Witt said.

Her Majesty’s Engineering and two other teams represented Western Albemarle on Saturday.

Students from HME watched matches on a small television at their table while others repaired a robot that collided with another in an earlier match. The other two teams were Loose Screws and Cable Management.

All of the Western Albemarle teams work out of the same Physics classroom, said Jacob See, a member of HME. He likes that setup, which he said gives the teams a chance to work together.

Issak Nathan, a Western Albemarle student on HME, said they’ve continued to tweak the robot and the code, even during competition.

“It’s trial by fire,” he said of Saturday’s event.

See said one of the hardest parts of building the robot was that coders need to know where everything is and a slight change in the design requires coding changes.

“The center of gravity has been the biggest pain,” Witt said.

Witt has enjoyed working with the robots and the team.

Teams participate in match play during the FIRST Tech Challenge Charlottesville qualifier Saturday at the University of Virginia. The event is sponsored by Micron and hosted at the UVa School of Engineering. Find more photos at DailyProgress.com.

Zach Dellimore from the Cable Management team at Western Albemarle practices with his robot during the FIRST Tech Challenge Charlottesville qualifier Saturday at the University of Virginia. The event is sponsored by Micron and hosted at the UVa School of Engineering.