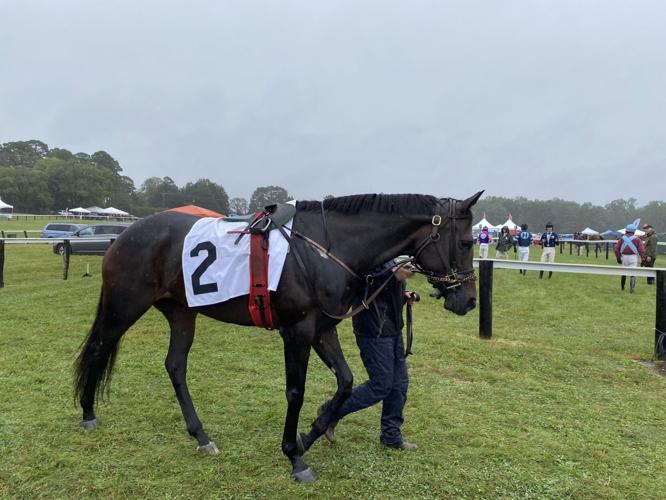 A guide leads a horse across the field at the Foxfield Races on Sunday. 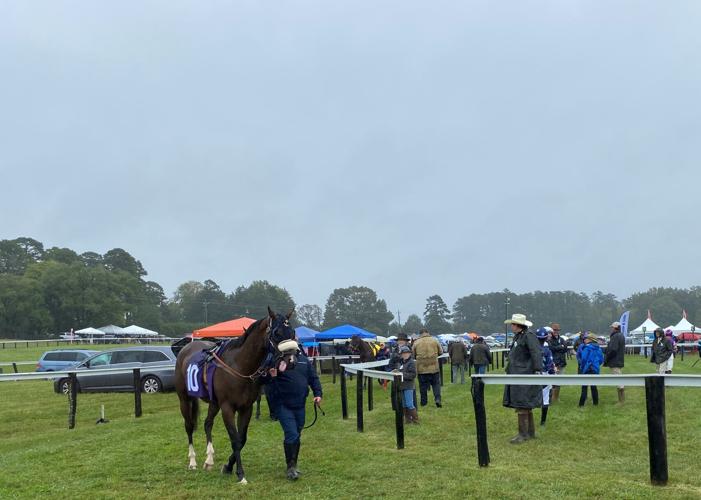 Rain gear was de rigueur at the Foxfield Races on Sunday.

Fans who gather for the twice-yearly Foxfield Races steeplechase typically wear sundresses and boat shoes, but Sunday’s drizzly weather had them decked out in rain boots and raincoats. Umbrellas dotted the verdant field.

The races went on despite the weather, except what would have been the first ever pony race.

About 3,700 people bought tickets for this fall’s races, close to the 4,000 who purchased tickets last year, said Foxfield Races’ executive director Kelsey Cox. She said attendance was down because of inclement weather brought in by Hurricane Ian.

Still, those who braved the falling mist and wind were eager to see the six races on the schedule.

“I’m so excited,” said Leo Peterson, age 6. It was his first time at Foxfield’s Family Day. He added that he loved petting the bunnies and riding the “big horse.”

His mom, Beth Peterson, was nervous about the weather, she said, but hoped that she and her family had bundled up enough to prepare for it.

It was Christian Johnson’s first time at the races too. Though she was born and raised in Charlottesville, she had been unable to come to Foxfield until Habitat for Humanity of Greater Charlottesville secured free tickets for her and other families who had Habitat homes.

Then they invited her to sing the national anthem.

“I’ve always wanted to come, and so now being here and being able to sing, it’s an honor,” Johnson said. “I didn’t even know they knew I could sing.”

This was also the second year that the races’ proceeds generated a $50,000 donation to charity.

“We’re really excited about this new group of stewards of the Foxfield Races. They see this site as a kind of hallowed ground, a place where people from all walks of life can come together instead of being exclusive,” said Dan Rosensweig, president and CEO of Habitat for Humanity of Greater Charlottesville.

The Foxfield Races have been held for the last 45 years. In 2019, Foxfield Races entered into an agreement with the Albemarle County Easement Authority that will allow the property, which is about eight miles northwest of Charlottesville, to continue to be used for the races while protecting it from further development.

“Foxfield has always seemed like, well, that’s the thing those university students do. But really, this fall race day is making it a place where everybody feels comfortable,” Rosensweig said.

The jockeys, however, couldn’t get totally comfortable. Rain softened the course, meaning that riders were forced to be more careful.

“On rainy days, the horses and the jockeys are more cautious. If the ground’s a little deep, you can’t go as fast,” said Barclay Rives, one of the race’s outriders.

“It makes the race a bit more of a stamina test. You’ve got to be more sensible about how fast you go,” said Freddie Procter, who first participated in the Foxfield Races last spring.

“It was a sunny day, the ground was nice and quick. The ground is gonna be a lot softer today, and it’s only gonna get worse,” Procter said.

Parker Hendriks, considered one of the best steeplechase jockeys in the country, was riding at Foxfield for the third time.

“It’s very testing. This is an undulating, hilly track,” Hendriks said. “We’d rather have that than rock-hard ground—it’s better for the horse’s soundness.”

Although they shivered, attendees cheered as horses crossed the finish line. “The rain just makes it all more fun-spirited,” said Natalie Burgwin, volunteer and events manager for Habitat for Humanity of Greater Charlottesville.

Two Charlottesville businesses that had been using the name Spudnuts when marketing and discussing their fried, glazed, potato-based doughnuts…

A Charlottesville man who previously was sentenced to life imprisonment on drug and gun charges, but had his sentence reduced, has been charge…

The grandparents of a 7-year-old girl who died in an attack by a Rottweiler at their Waynesboro residence last year, have pleaded guilty to ch…

CVS and Walgreens plan to offer the abortion pill

Top 10 reasons drivers get pulled over

Top 10 reasons drivers get pulled over

Through the horror and desperation, rare scenes of redemption in Syria and Turkey

Through the horror and desperation, rare scenes of redemption in Syria and Turkey

A guide leads a horse across the field at the Foxfield Races on Sunday.

Rain gear was de rigueur at the Foxfield Races on Sunday.