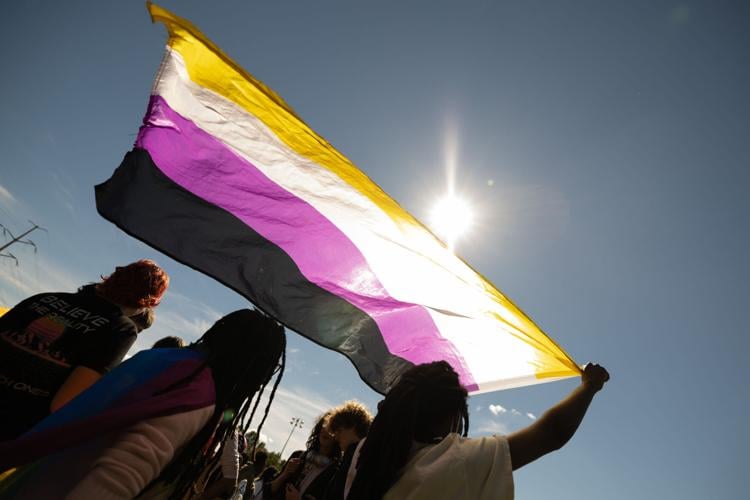 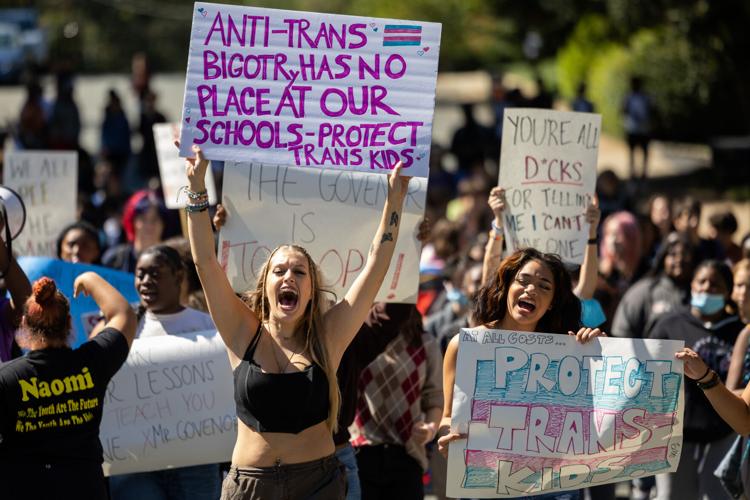 About 200 Charlottesville High School students on Wednesday protested new policies from the governor’s office that would restrict the rights of transgender students.

Charlottesville High School was one of the many schools across Virginia where students denounced Youngkin’s policy.

Youngkin’s 2022 Model Policies, a draft of which was released Sept. 16, would require students to use school programs and facilities that correspond to their biological sex. Parents would have to give teachers and staff permission to call students by a different name or pronoun.

Parents would also have to provide legal documentation in order to change a student’s name and gender on school records.

Though Youngkin and his supporters say the measures protect parental rights, an issue he ran and won on in the past election, critics say the move forces kids to come out to families who may not be supportive and victimizes an already-marginalized group.

Public comment on the proposed changes opened Monday morning. By Wednesday afternoon, there were close to 33,000 entries on the online forum.

The UCLA School of Law’s Williams Institute, which researches gender identity and sexual orientation law, estimates that 6,200 trans children between 13 and 17 live in Virginia.

At CHS, a red-haired student held a poster reading, “I’m the scary transgender person the media warned you about.”

Another sign said, “It’s not about bathrooms just as it wasn’t about water fountains,” a reference to Jim Crow segregation. Another declared that students were “skipping our lessons to teach you one.”

“As students, we don’t get a lot of choices, but when we walk out and show unity, people are a lot more likely to listen,” said CHS senior Willow Sugg.

Junior Gabi Colon said she was cautiously optimistic that the protest could make a difference for LGBTQ students.

“I’m really hoping that this can be positive and lead to good change,” she said.

Before a crowd of their peers, student organizers criticized the new guidance as endangering trans students’ physical and mental health. A Trevor Project survey found that more than half of transgender and nonbinary (people who identify as neither male nor female) youth have seriously considered suicide.

CHS has a student population of slightly fewer than 1,200, according to the school’s website. About 200 participated in the walkout, a little more than a sixth of the student body.

“I didn’t know this many people were gonna be out here, but it’s great,” student Alani Green said.

When asked if she had a message for Youngkin, she held out her sign, which read, “protect trans kids.”

Students trekked from the practice field through the school’s vast parking lots, spilling out onto Grove Road. Principal Rashaad Pitt and other school staff, some wearing the school’s gender and sexuality alliance t-shirt, followed.

The protest, Pitt said, was entirely student-led and organized. CHS wants to “partner with families as we honor students’ needs, including their stated names and pronouns.”

Other Charlottesville City Schools protested Tuesday. About 100 gathered in a field outside Buford Middle School’s cafeteria. Seventh and eighth graders there displayed their support for trans students by wearing the colors of various pride flags.

One student wrapped a baby blue, pale pink, and white striped flag around her shoulders while another flapped a fan bearing the same pastel colors.

“We said if this is something that you’re going to do, we made a safe space on campus for them to come down,” Principal Adam Hastings said. He estimated that 100 to 150 students participated.

“Whether we need to have a conversation about sexual orientation or gender identity is sort of to the side,” Hastings said. What matters, he said, is that he has more than 600 students to look after.

“Some percentage of those students identify as LGBTQ. I have an obligation to keep my kids safe,” Hastings said.

Hastings said that if Youngkin’s policy is adopted, Walker school officials would continue to look out for all of their students.

Police say Austin Lee Edwards, 28, met the girl online and obtained her information by deceiving her with a false identity, known as “catfishing." Edwards was a Virginia State Trooper until his resignation last month.

The city announced the candidate list just six hours before the forum.

The department has responded to 131 calls for shots fired through November 2022.

"We're garden clubs; that's what we do."

The system is likely to spawn tornadoes and damaging winds after dark Tuesday, from eastern Texas to southern Indiana.

D' Sean Perry, 22, and a linebacker and defensive end for the University of Virginia football team, is one of three people who was shot dead a…