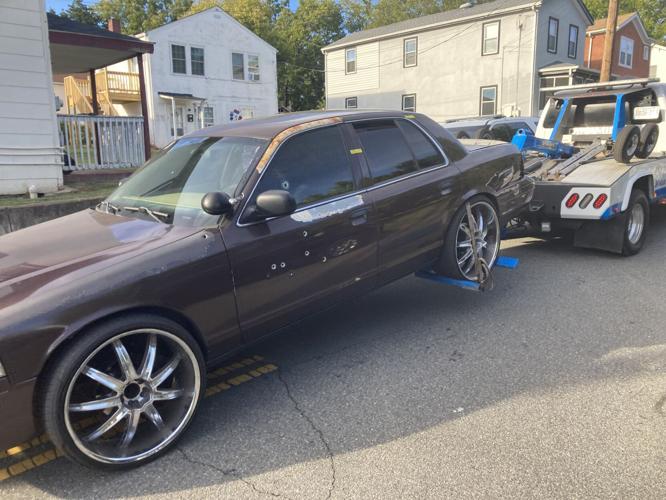 A tow truck prepares to move a bullet-riddled car from the scene of a shooting in the Tenth and Page neighborhood last month. Two men were hospitalized with gunshot wounds. 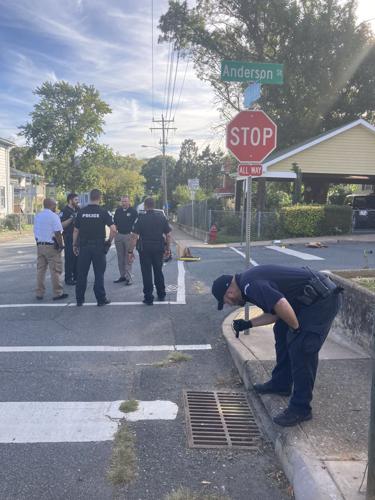 HAWES SPENCER, THE DAILY PROGRESS Charlottesville Police investigators search for evidence after the Sept. 28 shooting at the corner of Ninth and Anderson Street. Two men who were in a car were shot at and hospitalized with gunshot wounds.

A spate of shootings has struck Charlottesville over the last two months and many of those cases remain unsolved.

Between Sept. 1 and Oct. 18, the Charlottesville Police Department received 11 reports of shots fired and weapons violations, according to the department’s crime map. Five of those occurred in October alone. The department has responded to approximately 162 calls of shots fired in the last six months.

“Right now we do seem to be in a spike,” said acting field operations head Capt. Tony Newberry.

Two shootings occurred last weekend alone. Two juvenile males were shot, one with serious injuries, on Saturday near the Omni Hotel parking lot along Ridge-McIntire Road at the end of the Downtown Mall in Charlottesville. Police continue to investigate whether there may be “any possible connection” between that shooting and shots fired in the early morning of Oct. 16 on Hardy Drive.

According to a news release, a Charlottesville police officer reported gunshots near the Omni parking lot just off the Downtown Mall around 5:15 p.m. on Saturday, Oct.15. Officers responded to find a male juvenile with apparent gunshot wounds. That person was transported to the emergency room at the University of Virginia Hospital with serious injuries, while a second male juvenile victim arrived separately after the shooting with non-life threatening injuries.

The teenage boy who had serious injuries is in stable condition but is still in the hospital, Newberry said. Newberry believed at least four people were involved in that daylight shooting.

Fewer than 10 hours later, at 2:39 a.m. Sunday, police responded to a call of shots fired on Hardy Drive, about a half-mile from the earlier shooting. There were no reported injuries from the incident, according to a press release on the department’s website. Police collected multiple shell casings from the area.

“There are some persons of interest and some names identified, but I don’t think any arrests yet,” Newberry said. “We have a limited number of detectives and all of these cases are with that group and they’re working them all right now.”

CPD needs 110 sworn police officers, officers who have been through a year of training, to be fully staffed. Newberry said they only have 80, and he believes that that’s why there’s been an increase in shootings.

“The officers that we have, they’re going from call to call, which does not leave a lot of time for things like extra patrols and proactive enforcement. So it leaves us with a lot of opportunity for these things to happen,” Newberry said.

Rising gun violence is hardly unique to Charlottesville. An October 2021 report from the Centers for Disease Control and Prevention showed that firearm deaths increased 14% in 2020. AH Datalytics, an independent data analysis firm, has collected homicide reports from major cities across the country. Last year saw 6,927 murders. So far this year, there have been 6,564.

The shootings last weekend are among several, including a fatality, that have occurred within the past seven weeks in Charlottesville. Daquain Maurice Anderson was shot near Court Square about 3 a.m. Saturday, Sept. 17. Anderson later died of gunshot wounds at UVa hospital. A month later, police still haven’t made arrests in connection with his death.

On Wednesday, Sept. 28, at about 2:40 p.m., shots were fired in the 900 block of Anderson Street. When officers arrived, they found two men suffering from gunshot wounds. The men were taken to UVa Hospital. No arrests have been made in that shooting either.

At that time, a woman whose daughter attends nearby Venable Elementary School said her daughter heard the shots as she was coming home from school.

“First she heard the shots, so she hid behind a car,” a woman said at that time to a Daily Progress reporter. “Then another car went right by her, driving fast down Ninth Street South, and she saw two people inside it.”

She and other neighbors are concerned about the neighborhood’s safety, she said, and pointed to a nearby car that bore three bullet holes from a nighttime shooting several weeks ago.

CPD wants to hire more police, which Newberry said it’s the first step to addressing gun crime in Charlottesville. But that comes with its own challenges.

“We are third when it comes to pay. Our competition in this area primarily comes from the university or the county. You have the option to still live in this area but make more money,” Newberry said.

On Monday, the university received several more communications with threats that were similar to the messages received on Saturday.

One dead after Orange County crash

The truck driver was arrested and charged with involuntary manslaughter and not having a valid commercial driver's license.

A shooter opened fire in a Walmart in Virginia late Tuesday, leaving six people dead, police said, in the second high-profile mass killing in a handful of days.

Hudson's decision to run for the state Senate will force her into a primary with Creigh Deeds.

Many shootings, few answers in a bloody autumn

From September to November, the number killed by guns now stands at six, including the UVa mass shooting, while the number injured is 12.

Memories of happy times came easily to the teammates and other speakers who came to remember Lavel Davis, Jr., Devin Chandler and D’Sean Perry…

Authorities investigating the fatal shootings of six people at a Walmart said that the shooter bought the gun just hours before and left a note with grievances against coworkers on his phone.

The University of Virginia Alumni Association has created a new fund to financially help the families of three student athletes killed on Nov.…

A tow truck prepares to move a bullet-riddled car from the scene of a shooting in the Tenth and Page neighborhood last month. Two men were hospitalized with gunshot wounds.

HAWES SPENCER, THE DAILY PROGRESS Charlottesville Police investigators search for evidence after the Sept. 28 shooting at the corner of Ninth and Anderson Street. Two men who were in a car were shot at and hospitalized with gunshot wounds.