The Charlottesville area is marking another anniversary since the violent Unite the Right rally four years ago, this time with the Confederate statues that served as a magnet for white supremacists now gone.

The city’s statues of Gens. Robert E. Lee and Thomas “Stonewall” Jackson were removed from downtown parks a month ago, after years of advocacy and legal battles. Although local activists were glad to see them go, they say much more work remains to make the community more equitable.

As some progress has been made, several community members say those efforts are ongoing.

Local anti-racist activist Amanda Moxham said the statues were “lightning rods for the ongoing neo-Nazi and Confederate movements” that are happening around the country.

“While certainly bringing the statues down does not necessarily do the work of changing the internal structures of systemic oppression in this community, it sends a very strong message to say, that is not what we are aiming for — we are not aiming to align to those symbols because of how destructive and toxic they are to the systems, processes and people who are here in this community,” she said.

The 2017 summer of turmoil in Charlottesville culminated on Aug. 11 and 12, when white supremacists marched on the University of Virginia and attacked counter-protesters, and amid violence downtown the next day, a man rammed his car into a crowd of people protesting the Unite the Right rally, injuring more than 30 people and killing Heather Heyer.

Many of those injured in the attack are still in need of help as they cope with life-altering injuries and trauma from the events.

The Heal Charlottesville Fund — which distributed about $600,000 to survivors and another $320,000 for trauma counseling — is depleted. Other efforts — including the National Compassion Fund: Charlottesville — only provided one-time funding.

“I urge mental health professionals to provide sliding-scale therapy for anyone who witnessed the car attack who is not able to afford therapy,” she said.

Tay Washington, who was injured after her car was hit at Fourth and Water Street, continues to face a “horrible struggle,” her mother said. As a result of the attack, Washington has complex regional pain syndrome, a chronic condition that usually affects her arms or legs and makes it difficult for her to work.

“At this point, I’m just trying to move on and live my life to the best I can where I am now, because it is so traumatic and depressing to hold on to what has happened, and what is still happening, and you have to live every day,” Washington said. “My new way of doing things is I just take one day at a time.”

Washington has spoken publicly in previous years about her financial challenges. Before the attack, she had earned her EMT certification and had a job waiting for her after firefighter school.

An organization, the Rise District, has helped her to pay for rent and car insurance since March of this year.

“I just really have to keep thanking God because if it wasn’t for my faith, and people He’s allowed to be in my life who’ve just come out of nowhere, I wouldn’t be in the place I am now and I probably wouldn’t be as strong as I am now,” she said.

Three days after the rally, Washington and her sister filed a lawsuit against rally organizers and attendees. The status of the lawsuit was unclear Wednesday.

Washington applied for funding through the Virginia Victims Fund, a state program created to help victims of violent crime with out-of-pocket expenses that acts as a payer of last resort, but she said she was told to go to a shelter for abused women.

Washington found a doctor in Richmond who could treat her pain, but they do not take Medicaid.

“I just know that I’m in the city where it happened, and I can’t get any help from my city,” she said.

Moxham, a parent with the Hate-Free Schools Coalition of Albemarle County, said it is critical that there are continued efforts to educate, inform and create action opportunities for people across intersections of racial justice and human rights.

“Every single system that we all exist within is consistently needing to be challenged, assessed and transformed so that all marginalized groups are impacted in a way that is equitable, safe and supportive, and really enable people to not just survive, but to actually thrive in this community,” she said.

Moxham pointed to affordable housing, the legal system, food justice and education as those systems. Through efforts from local organizations and activists, changes have been made in those areas since 2017.

Over the last four years, Hate-Free has pushed the Albemarle school division to ban Confederate imagery, end the division’s school resource officer program and change school names. Most recently, the group has supported the implementation of an anti-racist curriculum and the proposed policy aimed at protecting transgender and gender-expansive students.

Educational justice is complex, Moxham said, and as pieces start to unfold, more issues are viewable.

“I think that really is an indicator of how systemic this stuff is,” she said. “It’s like an onion, you keep pulling back another layer, and you’re like, ‘Oh this is what’s driving that. Now we see.’”

On Thursday, in one of the few formal events planned, Hate-Free is hosting a car parade and rally at the Albemarle County Office Building-McIntire starting at 4:30 p.m. to support Black, Indigenous and people of color and LGBTQIA+ youth, as the county School Board is scheduled to adopt the proposed transgender student policy at its 6:30 p.m. meeting.

Philip Andrew Hamilton, the Republican candidate for the 57th District of the House of Delegates, also is scheduled to hold a rally at the County Office Building on Thursday, calling for the board to not implement “critical race theory.” The School Board has said it’s not adding critical race theory to its curricula.

“The act of even creating that event on Aug. 12 is very much a triggering catalyst for this community,” Moxham said of Hamilton’s event. “To be holding a rally in town on that day, on the anniversary of the Unite the Right rally, is for sure disturbing at best.”

A state of emergency was declared before the official start of the Unite the Right rally. 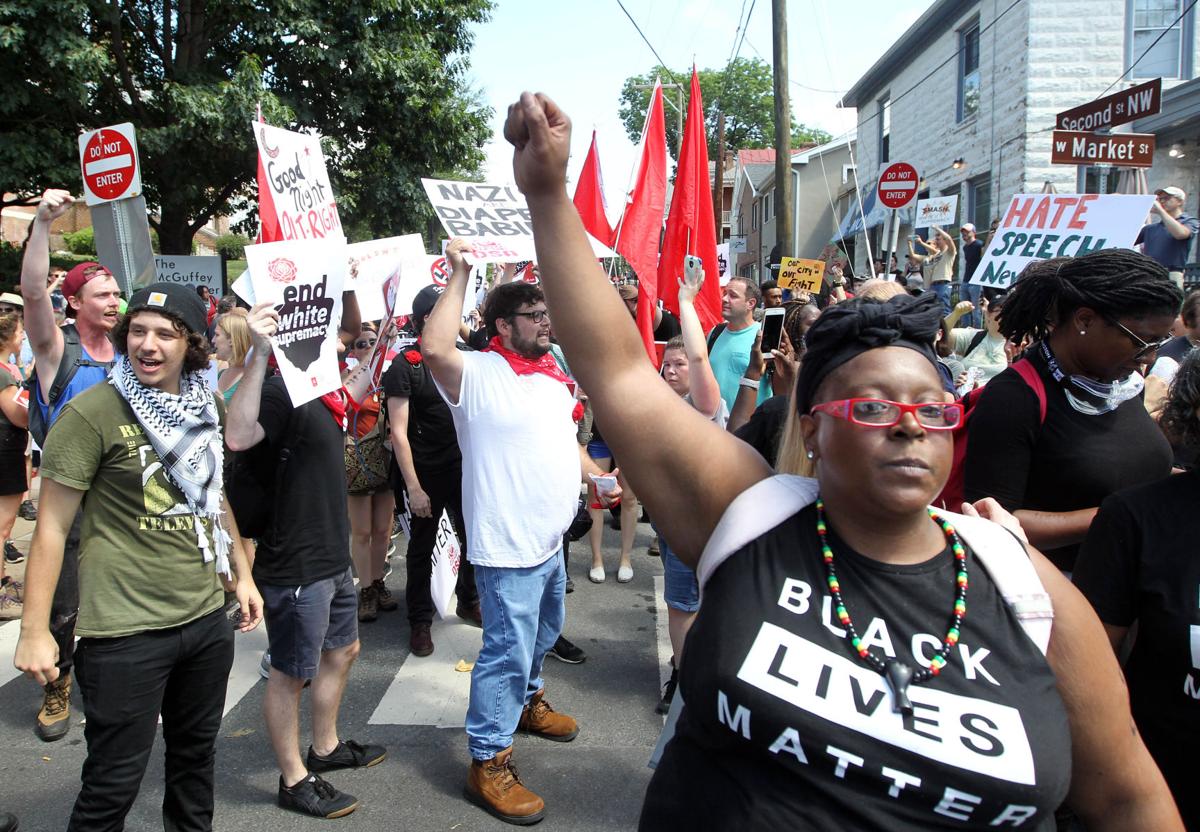 Local activist Rosia Parker and other counter-protesters take to the streets after the Unite the Right rally in downtown Charlottesville was declared unlawful by state police on Aug. 12, 2017. 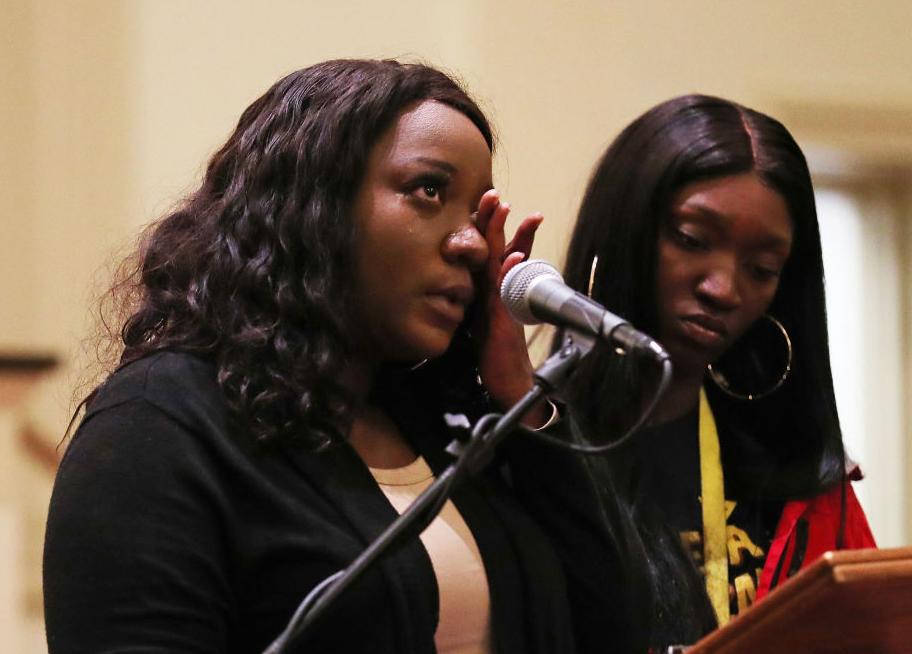 Tay Washington wipes a tear from her cheek as she speaks during an event at First United Methodist Church to raise money for survivors of the Aug. 12, 2017, car attack in November 2018.