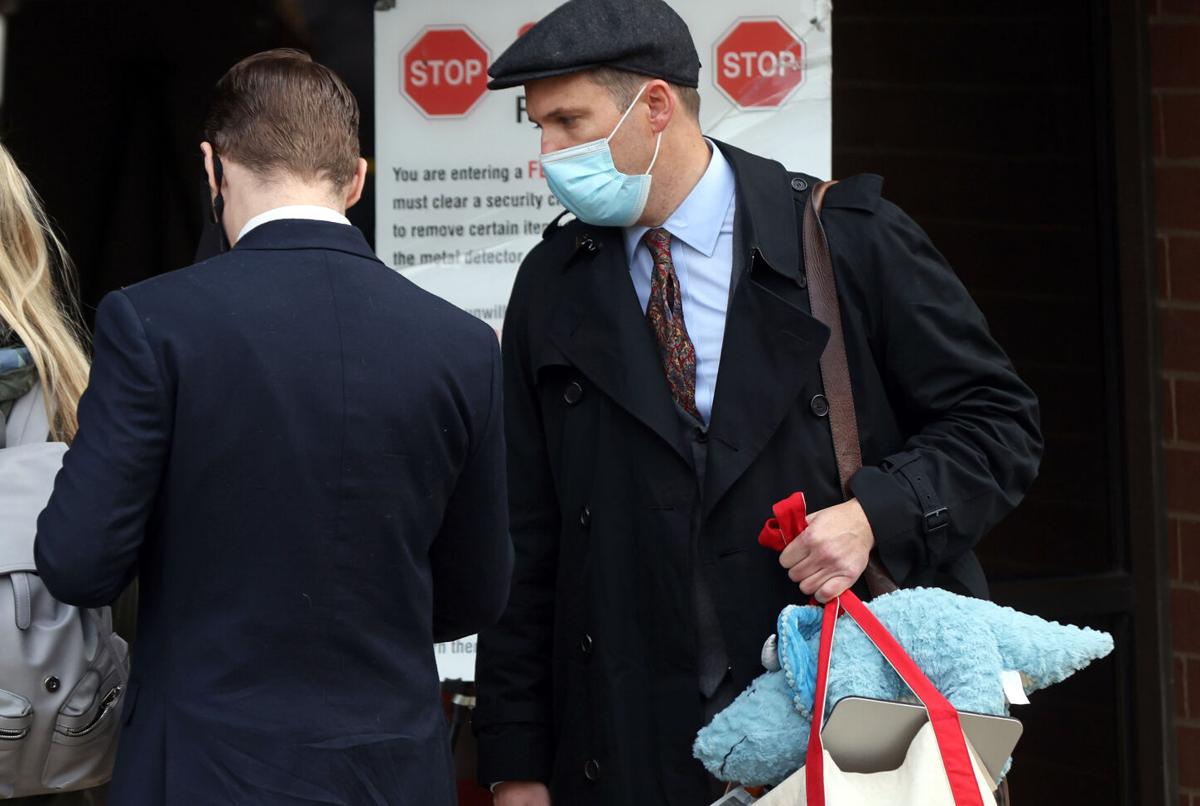 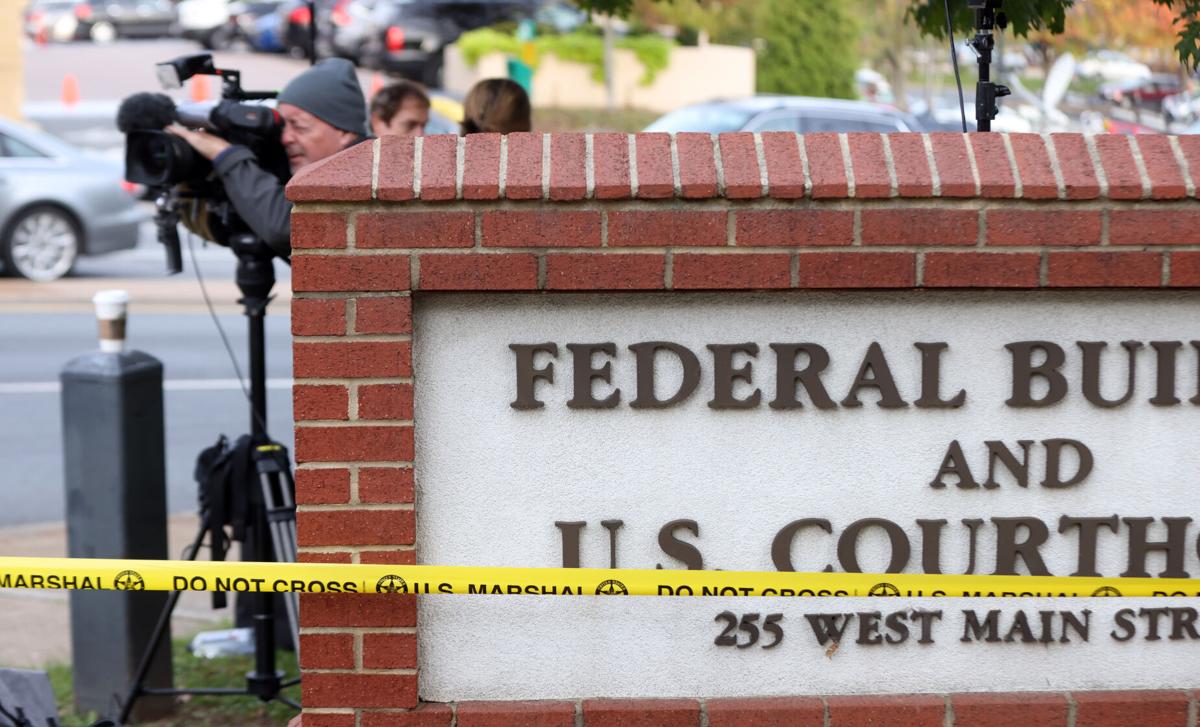 ANDREW SHURTLEFF, THE DAILY PROGRESS Media outside of the Federal Courthouse in Charlottesville.

Imagery of violence and suffering punctuated plaintiffs’ opening statements Thursday as defendants in the Sines v. Kessler trial tried to distance themselves from each and redirect blame.

The Sines v. Kessler trial is the culmination of four years of legal efforts on behalf of nine Charlottesville area residents who were harmed by the deadly August 2017 rallies. Filed in October 2017, the lawsuit alleges that 10 groups and 14 individuals conspired to come to Charlottesville on the weekend of Aug. 11 and 12, 2017 and commit racist acts of violence.

After a jury of 12 was seated on Wednesday, opening statements began Thursday, allowing the parties to present a preview of their arguments.

“This case is about violence and intimidation that was planned for months and culminated in a tragic and violent weekend, August 11 and 12th of 2017 right here in Charlottesville Virginia,” said Karen Dunn, an attorney for the plaintiffs, kicking off the first full day of trial.

Dunn walked the jurors through the events of the weekend, including the torch rally in which she said various counter-protesters and two plaintiffs were attacked, as well as the rally and the car attack. Her statements highlighted the violent and racist rhetoric used by the defendants when planning the rally and the efforts of “plausible deniability” she argued they used to deflect blame.

“Plausible deniability — just like mace, shields and flagpoles — was a tool of this conspiracy,” Dunn said. “Plausible deniability is when you set up a situation in such a way that you can claim later, you had nothing to do with it, and we expect that is exactly what you will see and hear from the defendants in this case.”

After Dunn had spent roughly an hour walking the jury through an overview of the evidence against the defendants, co-counsel Roberta Kaplan introduced the jurors to the plaintiffs.

A diverse group of people from across the Charlottesville area, Kaplan described in detail the circumstances that led each plaintiff to be in the city that weekend and the harm they suffered as a result.

“While this case is about violence and hatred, it's also about justice and accountability,” said Kaplan. “Accountability for those who planned and perpetrated and celebrated the violence and justice for the plaintiffs who have lost so much.”

Among those plaintiffs was Natalie Romero, a 20-year-old UVa student at the time, who suffered attacks at the hands of torch-wielding marchers on Aug. 11 as well as severe injuries, including a skull fracture, from Fields’ vehicular attack.

“Natalie continues to live with scars on her face that, as [Dunn] has told you, remind her every single time that she looks in a mirror on the absolute horror of what she experienced that day,” Kaplan said.

Plaintiff's Marcus Martin and Marissa Blair, friends of Heyer, also suffered physical and emotional injuries from the car attack. Martin, who was engaged to Blair at the time, was struck by Fields’ car after he pushed her out of the way. Video shot by Blair in the aftermath of the attack was played for the jury, Blair’s panicked and pained cries for Martin cutting through the sounds of the chaos.

Romero, Martin, Blair and the other plaintiffs are all expected to testify during the trial, highlighting their injuries which they argue are a direct result of the defendants’ actions.

Because of the sheer number of defendants, not all are being represented by a single attorney leading to the necessity for multiple opening statements from the defense. Despite being varied in length, all of the defendants or their attorneys attempted to distance themselves from the violence, Fields and each other.

First up was James Kolenich, attorney for key organizer Jason Kessler, Nathan Damigo and Identity Evropa, who argued that violence was largely the result of police inaction. Over the course of Kolenich’s brief opening statement, he pointed to the rally permit Kessler had obtained and blamed the police for allowing violence to escalate.

“Kessler got a permit and he begged the police to protect his event, but you all know the story, this wasn’t the Charlottesville Police’s best day,” he said. “In the immediate aftermath the evidence will show that the community thought so too, they blamed the police. Yes they blame Kessler, and yes they hate Kessler, and yes he bears some responsibility in a moral sense.”

Representing himself, Richard Spencer spent his lengthy opening statement attempting to argue that he is a victim of political silencing who had little to no involvement in planning the August 2017 rallies and asked the jury to look past his “controversial but sincerely held beliefs.”

“You are here to make a rational application of the law, to apply the law where it applies and nothing else,” Spencer said to the jury. “Deciding on my behalf absolutely nothing about the feelings towards my sincerely held beliefs, toward my failing of character. You can go out and bash me on Twitter after all this is done, that is basically what I’m saying.”

Cantwell, who is representing himself pro se after being dropped by his attorneys years ago for his conduct, quickly went off on a tangent and mentioned Mein Kampf in the first two minutes of his opening statement. Acknowledging that his mouth gets him into trouble often, Cantwell oscillated wildly between defending his racist political views and attacking the plaintiffs, rarely touching anything that resembled a coherent defense.

Bryan Jones, a Charlottesville based attorney representing defendants Michael Hill, Michael Tubbs and the League of the South, argued that his client has nothing to do with Fields and said that his clients purposefully had little involvement with the torch march.

Though the focal point of much of the A12 news, Fields’ attorney Dave Campbell said that his client was not directly connected to any of the defendants. Over the course of the trial, Campbell said he was confident the evidence would show that Fields had not communicated with any of the other defendants prior to the rally.

“Unlike all of the other co-defendants, you won't hear from Mr. Fields here this week and, unlike all the other co defendants, Mr. Fields is in federal prison for life, and actually has 30 life sentences,” Campbell said. “So to the extent that you're asked to punish Mr. Fields, I simply will submit to you at the end of the case that he's been punished.”

In a change of pace, attorney William E. ReBrook argued that his clients the National Socialist Movement and its former leader Jeff Schoep held apprehensive views that “most of us would fight against until our dying breath.”

ReBrook’s argument quickly veered into issues of free speech and insults toward the plaintiffs’ counsel before Judge Norman K. Moon had to interrupt to tell him not to bring up subjects outside the scope of the case.

ReBrook again veered off course, referencing the views on Nazis held by Brad Pitt’s character in the movie Inglorious Basterds, before being again cut off by Moon and ending his opening statement.

The last of the day, Joshua Smith, counsel for Matthew Heimbach, Matthew Parrott and the Traditionalist Worker Party, initially tried to argue that the counter-protesters had shown up without a permit before he was cut off by Moon. A permit is not needed to protest, Moon said, forcing Smith to transition to the argument that his clients had given directives to their members and supporters not to instigate violence.

The Sines trial will resume at 9 a.m. Friday and witness testimony is expected to commence.

Jury hits rally organizers with millions of dollars in damages

The jury was deadlocked on two federal conspiracy charges, indicating that a second trial may be on the horizon.

The trial has now stretched into a fifth week.

Just as the federal Sines v. Kessler trial was gearing up, Jason Kessler's own Freedom of Information lawsuit was largely dismissed by a Charlottesville Circuit Court judge.

An 11-person jury will continue to deliberate in the Sines v. Kessler case, stretching the trial into its fifth week with one fewer juror due …

“I still struggle with a lot of the mental and emotional things and I still feel like I can't get back the things that I've lost,” Devin Willis said. “The nightmares subsided until I came back here for this trial.”

Matthew Heimbach, a founder of the neo-Nazi Traditionalist Worker Party, was a surprise witness called by the plaintiffs Tuesday. He called James Fields a “martyr for our folk."

After more than four years of build-up, the Sines v. Kessler lawsuit is now in the hands of a 12-person jury, who will decide whether more than a dozen defendants conspired to come to Charlottesville in 2017 and commit acts of racist violence at the Unite the Right rally and preceding torch march.

Rally lawsuit defendants Chris Cantwell and Richard Spencer asked for charges against them to be dismissed Tuesday, but the judge refused, for…

Defendants attempts to connect reverend to "antifa" during hostile hearing

Rev. Seth Wispelwey was part of a group of interfaith clergy members who said he was attacked and injured during the Unite the Right rally.

Neo-Nazi leader put in the hot seat during tense testimony

The Traditionalist Worker Party, or TWP, has been a particular focus of the case so far as the plaintiffs have called upon various communications evidence from the group’s members.

ANDREW SHURTLEFF, THE DAILY PROGRESS Media outside of the Federal Courthouse in Charlottesville.