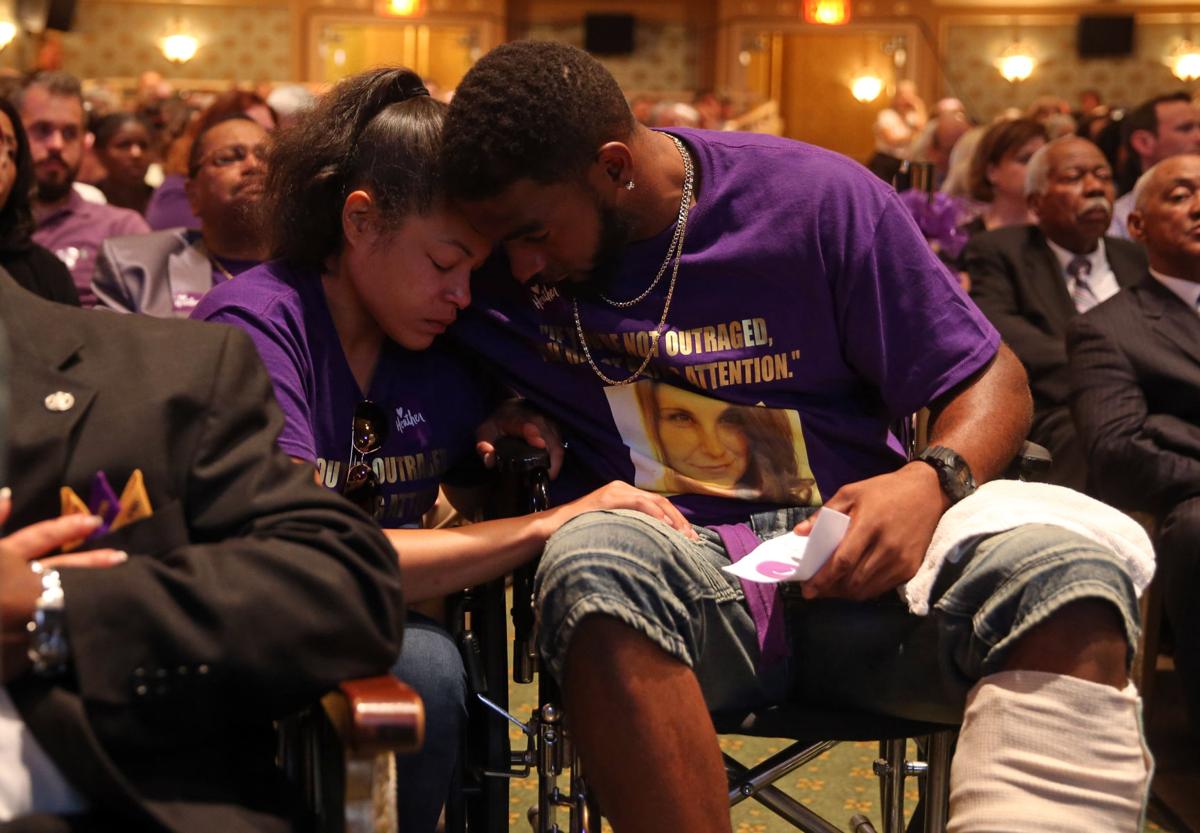 Marcus Martin, right, hugs his fiancé Marissa Blair, left, during a memorial for Heather Heyer Wed., August 16, 2017, at the Paramount Theater in Charlottesville, Va. Martin pushed his fiancé out of the way of the vehicle that killed Heyer the previous weekend after the Unite The Right rally.

James Alex Fields Jr., second from left, holds a black shield bearing the symbol for Vanguard America, a neo-Nazi group, at the Unite the Right rally on Aug. 12, 2017. This and similar images and video footage were admitted as evidence during Fields’ Charlottesville Circuit Court trial.

Seated in front of a jury Monday, Marissa Blair said she came to Charlottesville on Aug. 12, 2017 to join her close friend Heather Heyer.

The two had a bond that few coworkers did, she said, becoming friends who never tired of each other. With pain in her voice Blair said that when she joined a crowd of peaceful counter-protesters that day she never could have expected that Heyer would soon be dead.

“No one expects or would expect for your friend to be killed right in front of you for standing up for what she believes in,” said Blair. “At times I feel guilty because she was about to leave to go to work but we found this crowd and we stayed. You can see in the video, she was standing right in front of me.”

Blair is one of nine plaintiffs in the federal Sines v. Kessler lawsuit, which seeks to hold key organizers and participants of the 2017 Unite the Right rally responsible for allegedly conspiring to come to Charlottesville and commit acts of racist violence.

Among those defendants is James Alex Fields Jr., who drove his car into a crowd of counter-protesters on Aug. 12, 2017, murdering Heyer and injuring dozens, including Blair and six of the other plaintiffs. The other defendants have, for the most part, spent the trial trying to distance themselves from Fields and each other.

As part of her testimony, Blair was forced to re-watch video she took of the crowd and Heyer as Fields’ struck the crowd. She would later be forced to watch it again as pro se defendant Chris Cantwell tried to advance a so-far unsupported idea that bandanas marked members of antifa.

Though Blair was badly bruised and continues to suffer emotionally and mentally from the attack, she largely avoided injury when her then-fiance, Marcus Martin, pushed her out of the way. Martin, who is also a plaintiff in the lawsuit, was struck by Fields. Martin is visible in a haunting image of the attack, his body twisted in mid-air as he rolls over the top of Fields’ Dodge Challenger. Martin, whose leg was injured, has since recovered.

Blair said that the stress of the attack and the lingering emotional damage would strain her relationship with Martin, eventually leading to the two separating. Now, four years later, she said she has not fully recovered and finds it difficult to maintain focus while reading.

“I’ve always thought of myself as a pretty strong person, so I figured I could push through it, but, like I said earlier, my emotional scars are way worse,” she said. “I’m typically a happy person, but I became super depressed and anxious. I often still am.”

Blair was one of only two witnesses called Monday. Defendant Michael Tubbs, leader of the Florida chapter of the neo-Confederate League of the South, was called as an adverse witness and became at least the third defendant accused of defending Fields.

According to evidence, Tubbs tweeted six times in 2020 that “Fields did nothing wrong,” — a view Tubbs declined to comment on Monday.

“It’s always a tragedy when people are killed or injured, but I received the information the same way that I receive information about anybody else’s death: it was on television,” he said. “I didn’t feel that there was an emotional connection to me or anything that happened.”

Despite that bit of evidence, the bulk of Tubbs’ testimony centered on his role the day of the Unite the Right rally. In footage previously shown to the jury, Tubbs and fellow defendant Michael Hill can be seen leading League of the South members into a conflict with counter-protesters. Plaintiffs’ counsel Alan Levine has likened this to an attack, something both Tubbs and Hill have denied, describing their actions as self-defense.

Levine also questioned Tubbs about his response to the assault of DeAndre Harris, who was attacked by six men in Market Street Garage on Aug. 12, 2017, suffering significant injuries. Since then, four of those men have been identified and convicted for crimes related to the attack, including Tyler Davis, a member of Tubbs’ chapter of the League of the South.

Tubbs admitted to witnessing the attack but denied that he knew Davis was involved. Tubbs never contacted the Charlottesville police about the attack.

“Anybody who has been in a violent situation knows that there are certain physiological effects on the human body that limit your perceptions, including tunnel vision, and other factors, so in the middle of chaos it is difficult to determine what exactly was going on,” he said.

After learning that Davis had been arrested for his role in the assault, Tubbs claimed that Davis’ phone was being used by federal agents to contact people from the League of the South. After being pressed further by Levine, Tubbs admitted to using Facebook to contact members of the League of the South who were friends with Davis and telling them to delete their conversations.

“You said, quote ‘You are friends with Tyler Davis. The feds apparently have possession of his phone and Tyler has been sending people messages while he is in jail. We need to remove him from your friends list immediately and delete any conversations you might have had with him via signal messenger or any other format,” Levine said, quoting a message sent by Tubbs.

Tubbs also admitted to deleting various emails in 2019, which he claimed were “ads and nonsense materials” that were causing his inbox to function improperly. A cell phone used by Tubbs from April to September 2017 was “badly damaged,” Tubbs additionally claimed.

The jury also was presented with three video depositions from non-defendant witnesses, including two members of the defendant group Vanguard America, which Fields was photographed alongside during the UTR rally.

One of those depositions came from Dillon Hopper, a former leader of Vanguard America, who said that Fields was not a member of the group. Fields did march with the group, Hopper said, and the association with Fields ended up hurting Vanguard America.

“The incident happened and then a lot of flack came down on us because of that and a lot of guys didn’t want to be associated with that,” he said. “They didn’t want the attention, and we lost a lot of members after Charlottesville because a lot of guys got scared.”

Though Hopper said it was a tragedy that Heyer lost her life, he said he didn’t think it was a surprise.

“If a surfer goes out into the ocean and surfs waves then he shouldn’t be surprised if he gets attacked by a shark because he chose to do that,” Hopper said. “That was that woman’s choice was to go out there just like it is a surfer’s choice to go surfing in the ocean with sharks. So it’s a tragedy that she had to lose her life, but at the same time it shouldn’t be a surprise to anybody.”

The plaintiffs will resume arguing their case on Tuesday.

Marcus Martin, right, hugs his fiancé Marissa Blair, left, during a memorial for Heather Heyer Wed., August 16, 2017, at the Paramount Theater in Charlottesville, Va. Martin pushed his fiancé out of the way of the vehicle that killed Heyer the previous weekend after the Unite The Right rally.

James Alex Fields Jr., second from left, holds a black shield bearing the symbol for Vanguard America, a neo-Nazi group, at the Unite the Right rally on Aug. 12, 2017. This and similar images and video footage were admitted as evidence during Fields’ Charlottesville Circuit Court trial.