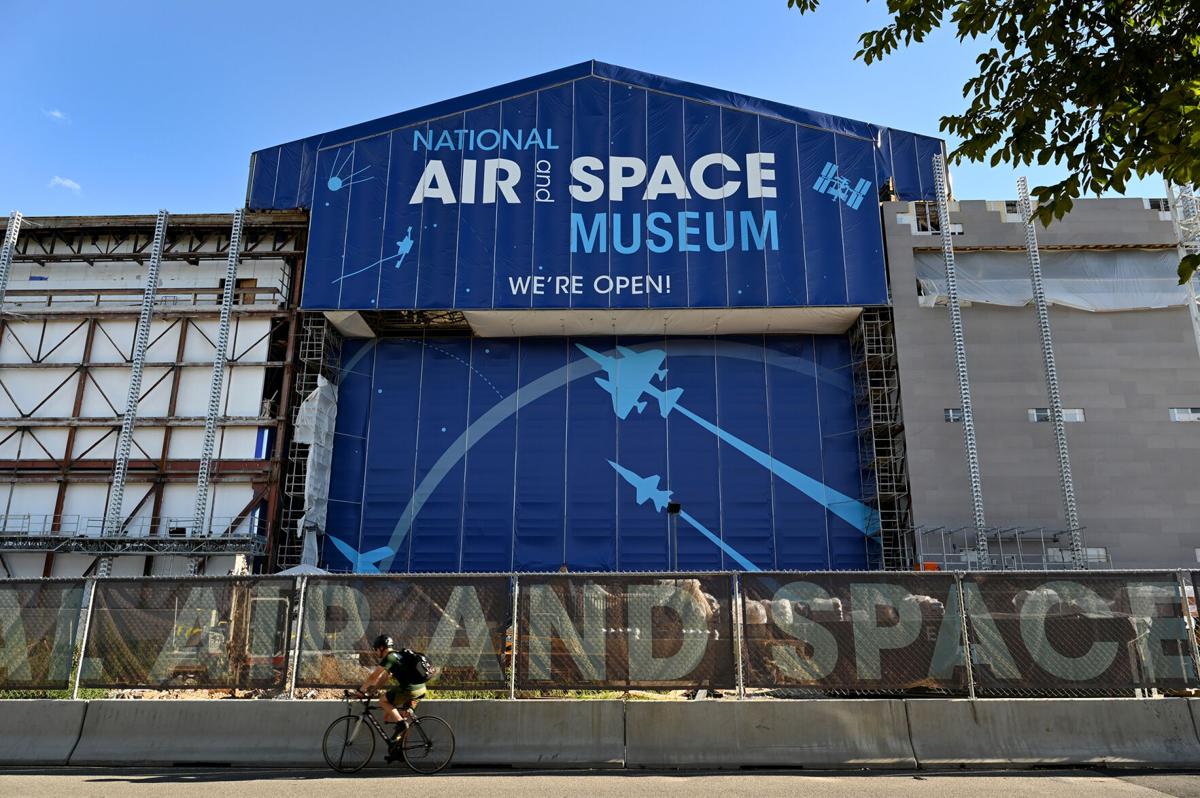 The Smithsonian National Air and Space Museum, pictured last year, had been partially closed for renovation before the pandemic. 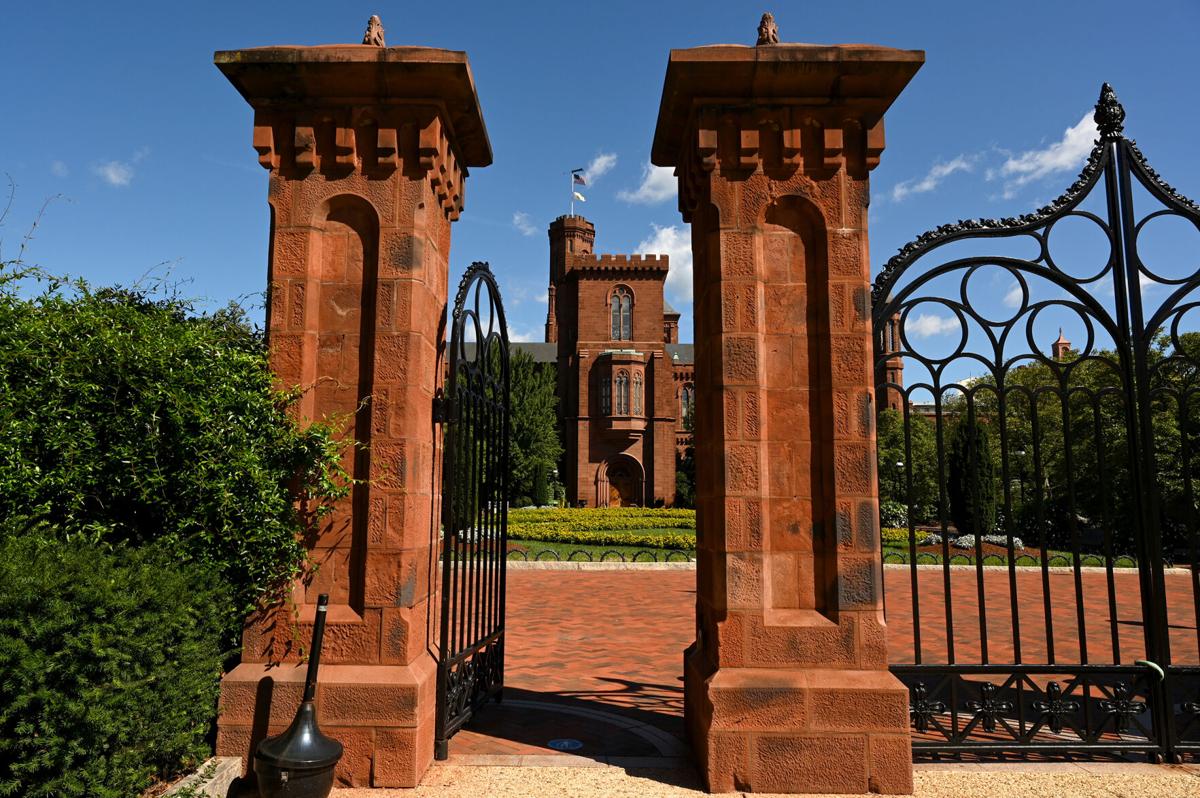 The Smithsonian Castle is shown. With the authorization of two new museums in December, the Smithsonian is also seeking founding directors for the National Museum of the American Latino and the American Women's History Museum. Those executives will be charged with building staff, collections and a physical space from scratch.

WASHINGTON — Like museums around the world, the Smithsonian is preparing to reopen in a landscape fraught with uncertainty.

Its leaders worry about whether visitors will return in person whenever the phased restart commences — no dates have yet been announced — and whether the gains in virtual audiences made during the coronavirus pandemic can be maintained. As they improvise with safety protocols and capacity increases over the next six to 18 months, they also must address calls for social justice, diversity and equity that continue to reverberate in their field.

But the Smithsonian has another major hurdle to overcome: the massive complex of art, history and science museums is missing leaders of four of its sites, including the high-profile and popular National Air and Space Museum. Earlier this month, Air and Space Director Ellen Stofan left the job she held for three years to become Smithsonian undersecretary for science.

With the authorization of two new museums in December, the Smithsonian is also seeking founding directors for the National Museum of the American Latino and the American Women's History Museum. Those executives will be charged with building staff, collections and a physical space from scratch.

The institution has never searched for six directors simultaneously — although it has never had to develop two new museums at once, either. The absences come at a jarring time, when normal operations are in flux and finances are strained. The Smithsonian stopped disclosing salaries in 2019, but its museum directors earn up to $446,000, according to its tax filings. They set the tone for their institutions and influence everything from exhibitions and public programs to budget, hiring and collecting practices.

The openings also represent a giant opportunity because they may push the Smithsonian to adapt to new demands, better reflect the diversity of the nation and embrace the institution's shifting mission of helping Americans grapple with social issues and current events.

"The museums are definitely going to be different going forward. We added a lot of tools to the toolbox," said Kim Sajet, who has led the National Portrait Gallery since 2013, making her one of the Smithsonian's longest-tenured directors.

"What does the future look like? People keep talking about the new normal, right?" said Eduardo Díaz, interim director of the newly authorized American Latino Museum. "There's going to be an increasing priority for digital — for digital immersion and digital outreach."

The events of the past year have left their mark on the search process, according to Kevin Gover, undersecretary for museums and culture, the executive in charge of the hiring.

"There is no one profile for a director any longer," said Gover, who was director of the National Museum of the American Indian before his promotion in January, a move that created one of the six vacancies.

The search committees will focus on personal qualities more than job titles, and attention will be given to individuals from film, broadcasting, design and other digital realms, he said. "They will be considered more strongly than in the past."

The searches for directors of the National Museum of African Art and the Cooper Hewitt Smithsonian Design Museum in New York City are in the final stages, Gover said, though he did not say when they will be completed. The posts have been empty for a year. The Cooper Hewitt's Caroline Baumann resigned in February 2020; Gus Casely-Hayford left the African Art Museum for London the next month.

"The sheer number, I suppose, makes it harder. It will take up more of my time this year than an ordinary year," Gover said. "But these jobs are always attractive, and we never have any trouble assembling a strong field of people who say, 'Yes, I'm willing to be considered.' "

The director of Air and Space is the most important leadership vacancy because of its size and the critical role it plays in the larger Smithsonian universe. When the museums are open, Air and Space usually leads in combined attendance from its main site on the National Mall and the Steven F. Udvar-Hazy Center in Chantilly. (In 2018, before construction began on the D.C. site, attendance at both topped 7.7 million.)

Air and Space is a primary draw for tourists, who, after visiting its planes and rockets, may wander into the other Smithsonian galleries. That's one reason the Smithsonian decided to keep it partially open during the seven-year, almost $1 billion renovation now underway. Partial closures began in late 2018 and will continue until 2025.

Though funded primarily by Congress, the project includes $250 million in private donations to modernize the galleries. Officials have raised a little more than $100 million toward that goal.

"Fundraising is important for that museum at this time. But we wouldn't hire a brilliant fundraiser who doesn't know the subject," Gover said.

"We talk about the unicorn," he added, referring to the rare executive who fills the unusual requirements for these positions. "We always find people with some combination."

Even within the larger Smithsonian bureaucracy, the institution's museum directors exert great influence. At the National Portrait Gallery, Sajet has expanded the definition of portraiture with a multidisciplinary approach that includes timed-based media and performance art, including a choreographer-in-residence.

Leading the Hirshhorn Museum and Sculpture Garden since 2014, Melissa Chiu has brought the work of international contemporary artists — including Ai Weiwei, Yayoi Kusama and Ragnar Kjartansson — as she increased attendance and raised the museum's national profile.

Gover is credited with moving the American Indian Museum to pursue equity and social justice for Native Americans and for bringing intellectual muscle to new exhibitions, including "Americans," which explores the ways pop culture represent Native peoples, and "Nation to Nation: Treaties Between the United States and American Indian Nations," which examines U.S.-American Indian diplomacy from the Colonial period.

Stofan's drive to bring a sense of wonder and magic back to Air and Space was on display in 2019, when the museum hosted a 50th-anniversary celebration of the Apollo 11 moon landing by projecting a full-size video of the 363-foot Saturn V rocket on the Washington Memorial.

The openings create an opportunity to continue to increase diversity at the Smithsonian, an effort that reflects the larger museum field. In keeping with national trends, the institution has demonstrated more success hiring women than improving racial diversity. In 2011, the Smithsonian's 13 major museums were led by 10 men and three women; nine directors were white and four were people of color. By comparison, six of the 10 current directors are women; three are people of color.

"We made a lot of progress in that regard. We intend to maintain that." Gover said about the increase in female leaders. "In some ways, we are stronger at the leadership level than we are in the next levels down. We have some work to do there."

The Association of Art Museum Directors reports half of its directors are women, up from 43 percent in 2013. A 2018 survey by the American Alliance of Museums found that 62 percent of museum leadership (a category that includes other senior officials) is female, up from 57 percent in 2015. The AAM survey found that 88 percent of museum leaders were white.

Diversity goes beyond representation, Gover added. "We want to be sure candidates are committed to diversity as well, making sure they are aware of the need for a diverse staff, diverse content. It's a big thing."

Several positions — leading the museums focused on Native Americans, American Latinos and African art, for example — will attract diverse candidates. But officials say Smithsonian Secretary Lonnie Bunch III — the first African American in the Smithsonian's top job — has increased the urgency around it.

"You have to have people who represent people of color in positions of authority to be able to shape the museums," Díaz said. "The country is diverse, and you need to have as many perspectives expressed, in education, research, conservation, collections and exhibition design.

"What does it mean to be American anymore? I think the Smithsonian is taking it to heart in important ways," he said.

Make sure you're not hurting your skin with these bad habits

Make sure you're not hurting your skin with these bad habits

PennyWise Episode 24: 10 tips to keep your moving costs down

PennyWise Episode 24: 10 tips to keep your moving costs down

Vital Signs: How to protect yourself from eye injuries this summer

The takeaway: wear the helmet and the goggles, and stay alert at all times during play — even if it’s just a for-fun match among friends.

Why does white always go first in chess?

Ever since the late 1800s, it has been standard for white to go first in chess. Has the time come to get rid of that rule?

Sometimes you get tired of eating the same salads packed with lettuce or other fresh greens. Don’t fret. Here's the perfect chicken salad recipe that is packed with flavor and no lettuce required.

EatingWell: An easy spin on a classic Cobb salad

This satisfying salad takes just 20 minutes to make, so it’s perfect for weeknight dinners, but it’s elegant enough to serve to guests.

Seeking a new job? Ask about these 6 career sweeteners

This is a golden moment to look for a new role. According to a survey, more six-figure jobs are available now than before the pandemic.

Personal use of hair dyes is very common. But do they increase cancer risk? There have been many studies, with conflicting results.

But this "no-till" gardening is not no-maintenance. It requires a continual application of organic mulch, the occasional spearing of the soil with a fork and a capacity for patience.

It is the little extras in life and in food that make eating a pleasurable experience. I do not think I would like my Honey Bunches of Oats ce…

How to add the perfect pot filler to your kitchen

A pot filler is a fancy addition to any kitchen. Basically it's a cold water tap installed by the cooktop area, eliminating filling pots at the sink.

While the COVID-19 pandemic has had profound impacts on pregnancy and birth rates, some effects have defied expectations.

The Smithsonian National Air and Space Museum, pictured last year, had been partially closed for renovation before the pandemic.

The Smithsonian Castle is shown. With the authorization of two new museums in December, the Smithsonian is also seeking founding directors for the National Museum of the American Latino and the American Women's History Museum. Those executives will be charged with building staff, collections and a physical space from scratch.