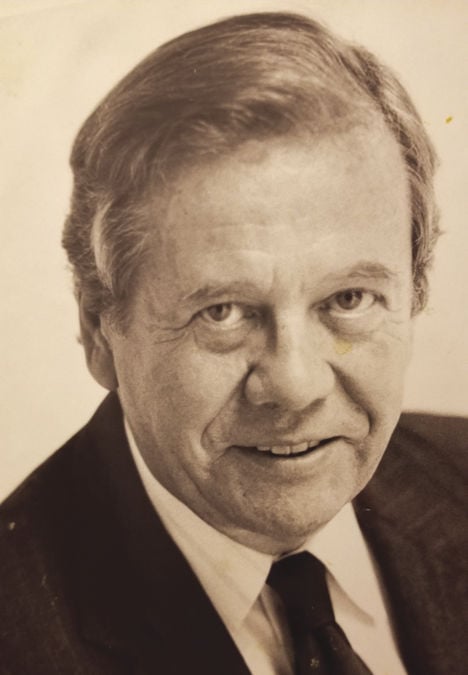 Philip Harold Anns, Charlottesville, Va., passed away peacefully at Westminster-Canterbury of the Blue Ridge on Monday October 7, 2019. Philip was born in London, England, on June 24, 1925, to Harold and Dorothy Anns. Philip attended Christ's College at Cambridge University, but after his first year joined the Fleet Air Arm in 1943. He gained his wings with the Royal Canadian Air Force in Ontario Canada, and whilst there spent some off-duty time in Chicago and New York. This is where he began his love affair with America. He returned to England to complete flight training in 1944, and then joined a carrier group flying Wildcat and Hellcat fighters in the Far East. During his operational training he became known as the infamous 'submarine Anns' after surviving a 'dip in the water' on take-off from HMS Trouncer when his Seafire went over side into the sea. He safely belly-landed at Barnahill Farm, Scotland. His farm in Virginia was later named for this farm. After the war, Philip received his BA in 1948 and his Master of Arts in 1951, both from Christ's College and then began his long and distinguished career within the pharmaceutical industry. In 1951, he immigrated to the United States and became a U.S. citizen in 1958. He held many executive positions with several pharmaceutical companies including spending five years in Australia as Managing Director of Squibb, Australia. He retired from A.H. Robins in Richmond, Va. as VP International Operations. He was Chairman of the Virginia District Export Council from 1982 -1991. Prior to moving to Westminster-Canterbury, he and his wife Arlene, who predeceased him in 2016, owned and managed Barnahill Farm in Greene County, which received the 2013 Forestry Award for exceptional forestry management. After moving to Barnahill Farm, Philip and two friends founded a men's discussion group named TAS (for Thesis, Antithesis, and Synthesis) that has met monthly for the past 20 years at Farmington Country Club for the purpose of discussing public policy issues. Philip was a dedicated and enthusiastic participant in the activities of TAS. Philip is survived by his daughter, Jean and her husband, Ron Fritchley Jr., of Danbury, Conn.; nephews, Mark Eiserman and his wife, Sharlene, Eric Eiserman, Chris Eiserman and his wife, Jeanene, all of Casper, Wyn., and Timothy Belgrove of England; granddaughter, Michelle and her husband, JR Boccanfuso, of Monroe, Conn., grandsons, John Lozyniak of Middleburg, Fla., and Conner Fritchley of Norwalk, Conn.; four great-grandchildren, and several great nephews and a great niece. Calling hours will be held on Friday, October 25, 2019, from 3 until 5 p.m. at Hill and Wood Funeral Home, 201 North First St., Charlottesville, VA 22902. Celebration of his life services will follow on Saturday, October 26, 2019, at 11 a.m. at St. Paul's Episcopal Church Ivy, 851 Owensville Road, Ivy, Va. A reception will follow at Greencroft Club, 575 Rodes Drive, Charlottesville, Va. In lieu of flowers, donations can be made to St. Paul's Church Ivy, P.O. Box 37, Ivy, VA 22945. Condolences may be made to his family at www.hillandwood.com.