Back to homepage
Subscriber Login
Please subscribe to keep reading. You can cancel at any time.
Loading&hellp
You are the owner of this article.
Edit Article Add New Article
You have permission to edit this article.
Edit
News
Obituaries
Opinion
Sports
Entertainment
Print Edition
Our Publications
Buy & Sell
Customer Service
Public Notices
1 of 2 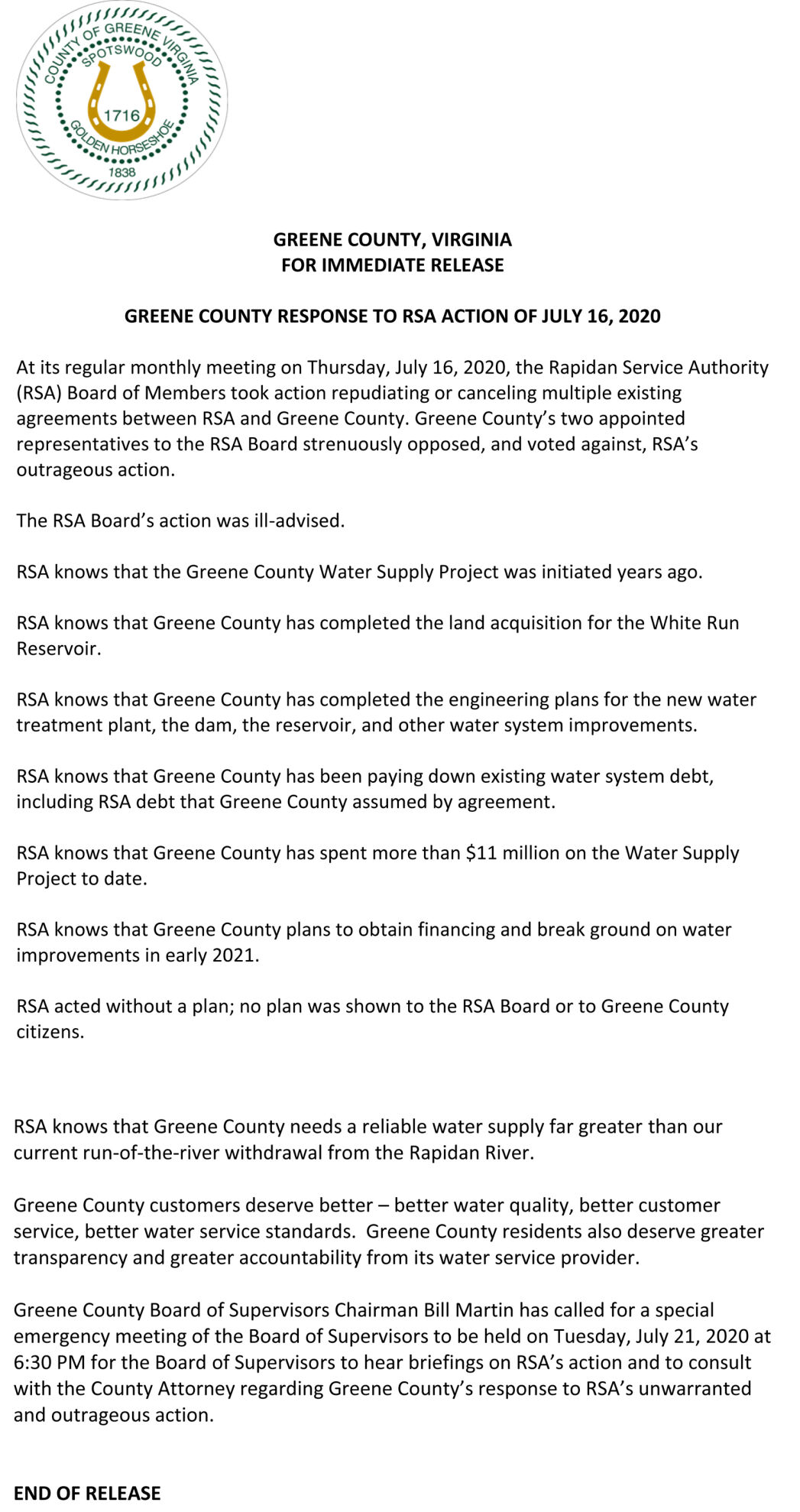 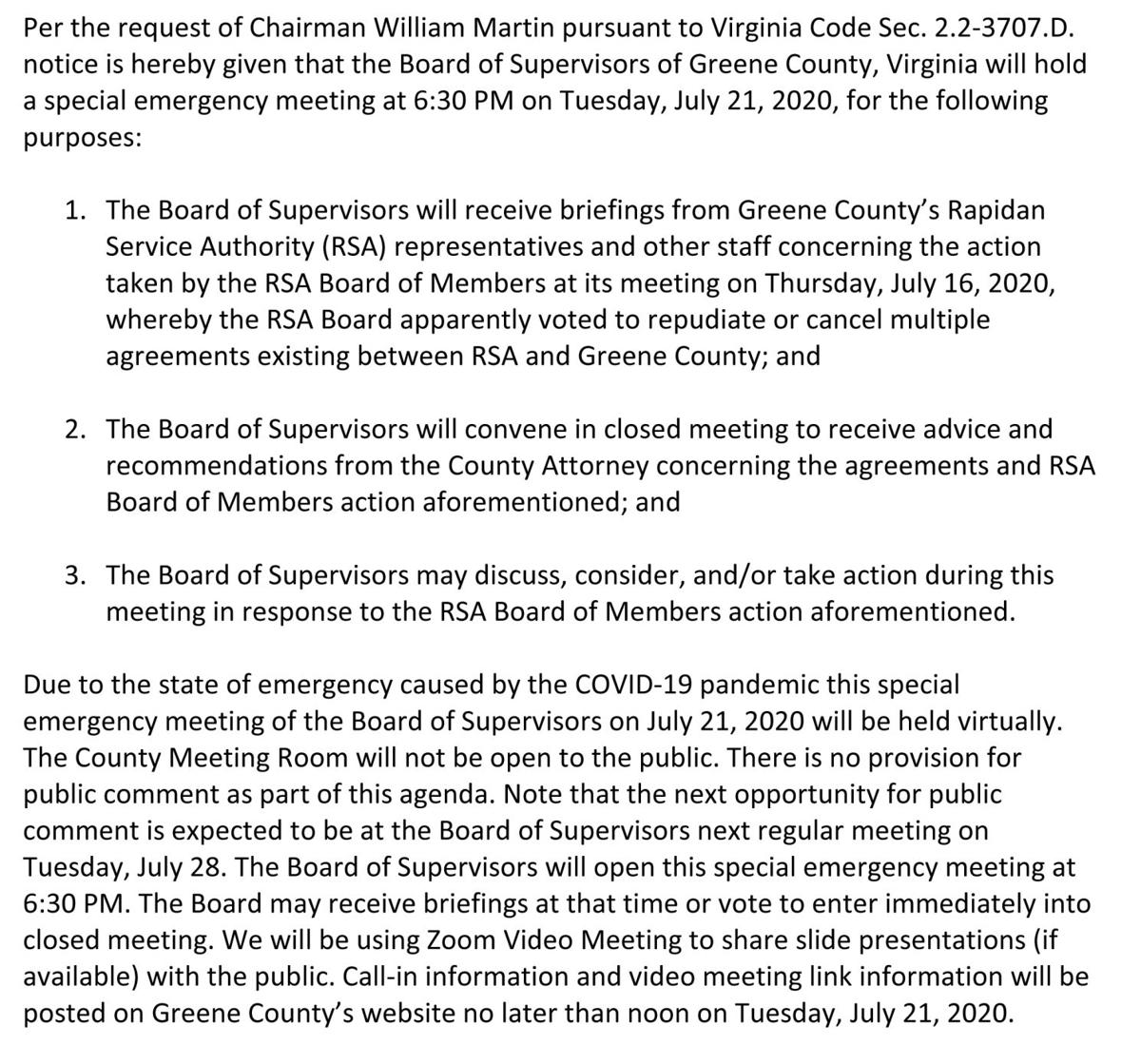 UPDATE 7.20.2020 at 9:45 a.m.: The Greene County Board of Supervisors offers response (see press release) to the action taken by the Rapidan Service Authority (RSA) Board of Members on Thursday, July 16 (below), calling the action by RSA "unwarranted and outrageous". The supervisors will hold a virtual special meeting at 6:30 p.m. on Tuesday, July 21. No public comment will be allotted but comment may be made during the regular public meeting on Tuesday, July 28 at 7:30 p.m. To listen to the meeting, visit the county website and click view recording. The agenda also states that Zoom call-in information will be posted online by noon Tuesday, July 21.

The White Run Reservoir project that has been in the works for nearly two decades may be dead after Thursday’s Rapidan Service Authority (RSA) Board of Members meeting. The board voted 4-2 to assume leadership of a 50-year water plan from Greene County during the monthly meeting and to immediately end the billing and collecting of facility fees for water and sewer users. Additionally, the board voted that all water and sewer impact fees collected per new hookup will need to be handed over to RSA before service will be turned on.

RSA is a regional water and sewer authority, founded in 1969, with Greene, Madison and Orange counties.

This vote occurred two days after the Greene County Board of Supervisors voted 5-0 on Tuesday, July 14, to increase the facility fee for users annually for the next three years, beginning Jan. 1, 2021. The current fee is $30 per equivalent dwelling unit (EDU), which measures how much water is used. Residential customers have one EDU while larger businesses have many. Both the county and the RSA board must agree to the increases before they can be implemented.

The county and RSA entered into a contract in 2005 that allowed the county to receive the impact fees per hookup, provided the county complete water infrastructure improvements by the end of 2008, according to a press release from Tim Clemons, general manager of RSA.

“To date, several major components of these improvements have yet to be initiated, much less completed,” Clemons said in the release. “Among these pending projects are the White Run Reservoir Project, water treatment facility and other improvements contractually agreed to by Greene County.”

Lee Frame, a member from Orange County who made the motion, said he is concerned about the split responsibility between Greene County and RSA.

“Our experience with both Madison and Orange is that RSA is responsible for and manages (plans) with input from the appropriate RSA board members,” Frame said. “I think that RSA should take on responsibility, which would mean that they should take on the necessary funding to do so. It’s very obvious that RSA will need to raise their rates to accommodate the funding necessary to build a water plant, build a pumping station or other facilities.”

Frame said RSA staff needs to sit down with the Greene County board representatives—Stanardsville Supervisor Bill Martin and Planning Commissioner Ron Williams—to identify what the rates will need to be prior to the next RSA board meeting on Aug. 20. He said the first step is putting RSA in charge of the plan to continue to provide water to the customers.

“Does that (plan) include an impoundment?” Martin asked the board.

“I didn’t say impoundment, I didn’t say plant, I said provide water service,” Frame said. “In terms of how that occurs, it will need to be discussed between you and RSA.”

The county has already purchased 125 acres for a proposed 900-million-gallon reservoir and a 1,460-foot-long, 75-foot-high dam on land between Watson, Fredericksburg and Dairy roads in Ruckersville.

Back to homepage
Subscriber Login
Please subscribe to keep reading. You can cancel at any time.
Loading&hellp

“This whole project was supposed to be done in 2008 and in as much has tripled in cost and that gives me great pause,” said Jim Crozier, a member from Orange County. “I also serve on not just this board but on other boards, and it is always my greatest concern to make sure that whoever I'm representing is treated the fairest that we possibly can and have the best outcome. I haven't seen an outcome, yet. That's what's very, very bothersome to me.”

RSA board Chairman Steve Hoffman, a member from Madison County, said he’s taking a position of looking out for the customers.

Troy Coppage, the other Madison representative, said RSA is a “seamless operation; a one-stop shop.”

Martin told the board that all the money that’s been collected by impact and facility fees has been used to pay down previous infrastructure debt that the county assumed from RSA. He also pointed out there was a recession during the timeframe that Crozier noted.

“But no one can claim that Greene County is not trying to do its upmost now,” Martin said.

“I never said as such,” Crozier said. “I did mention the timing and let me explain it to you; due to the fact that Greene County did not do what they were supposed to do it is now costing triple what it would have cost had they done what was contractually obligated.”

Clemons said the original estimate for the project was $20 million. Recent estimates have the total project between $45 million and $65 million.

Greene County Director of Planning and Zoning Administrator Jim Frydl told the RSA board that the county has invested about $11.4 million in costs for engineering, purchasing of land and state and federal mandated stream mitigation credits for the reservoir.

Clemons said while he doesn’t believe RSA has to use the project design that’s been worked on to this point, it might.

There is also a lawsuit in Greene County Circuit Court, filed by Charlottesville Land Development, which calls the fee a tax, which would be illegal, according to an opinion by Judge Claude Worrell Jr. from May. At press time, the case had not been scheduled for trial.

Clemons said he has spoken to state officials and an engineer that RSA has worked with before to begin the process of developing a new water plan.

The Greene County Board of Supervisors on Sept. 28 filed its second lawsuit in two weeks against Rapidan Service Authority (RSA) and the RSA B…

RSA Board cites lawsuit in denial of Greene's documentation request

Receive the latest local crime & courts coverage in your inbox every week.