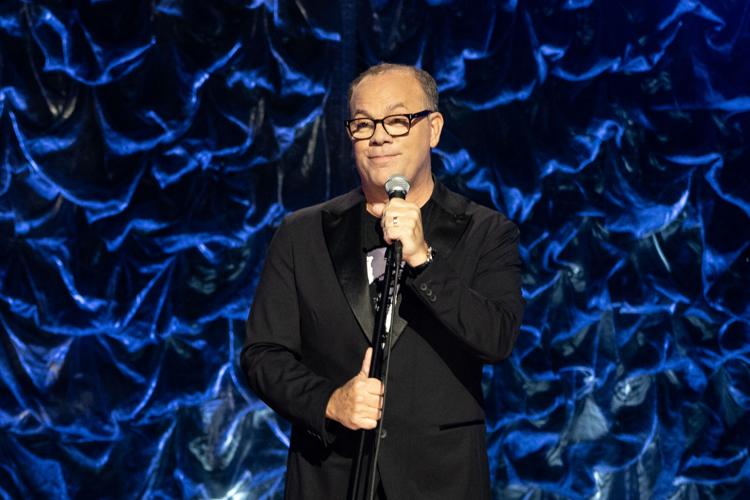 Tom Pap is shown presenting his "Tom Papa Stand-Up Special" on Netflix. He will bring his 2023 Comedy Tour to the Paramount Theater on Sunday evening. 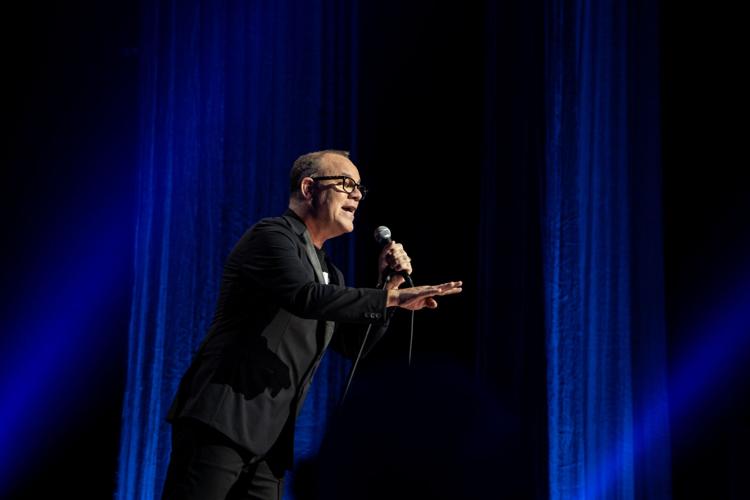 Tom Papa performs in his Netflix comedy special. He also presents a daily radio show on Netflix, a monthly radio show and a highly rated podcast. His third book, “We’re All in This Together ... So Make Some Room,” will be released June 6.

Nothing brings people together quite like comedy. Except, perhaps, for shared frustration with human nature’s boneheaded side.

Comedian Tom Papa has written a new book about stupidity. “We’re All in This Together ... So Make Some Room,” Papa’s third book, will be released June 6. The new collection of comedic essays by the author of “You’re Doing Great! — And Other Reasons to Stay Alive” and “Your Dad Stole My Rake: And Other Family Dilemmas” will give people time to reflect on a trait humanity shares.

“We are truly not alone,” Papa said. “We are told we are unique snowflakes, but when we’re all piled together, you can’t tell us apart.”

What can feel like an isolating experience — the embarrassing realization of one’s own stupid moments and blind spots — can bring bonding instead. “Sometimes, you learn from all the things everybody is doing,” Papa said. “Also, from the smart things.”

Papa will be bringing his stand-up comedy tour to Charlottesville’s Paramount Theater at 7:30 p.m. Sunday. “It’s such a fun time to be doing stand-up,” he said.

Catching Papa’s live show is a way to enjoy in person the comedy style that the versatile performer has expanded across a variety of platforms. He said that the options available to today’s comedians are bringing many more people into the fold to share their own observations. Technology has changed the traditional ways that performers made the leap to reaching national audiences.

“It’s all in your own hands,” Papa said. “Before, someone from ‘The Tonight Show’ had to tell you you’re worth listening to. Now you can record it yourself. The only thing stopping you is you.”

Audiences seek out comedy for many reasons — to make sense of baffling current events, to seek explanations for frustrating expressions of human nature, to let one’s guard down enough to laugh with a roomful of strangers, to make connections with others in a disjointed world. Increasingly, comedians and audience members alike are realizing that there’s room for plenty of comedic voices and perspectives to help create a fuller picture — and a lot more fun.

Podcasts are giving more comedians a chance to be heard. Papa said the format lends itself well to comedy, and to the magic that happens when funny folks get together. Rapport builds with frequency, and it’s easy these days not only to follow a favorite comedian, but also discover dozens of others one might never have seen in person.

“Comedians, we like to spend more time, go a little deeper,” Papa said of podcasting. “The audience likes that, too.”

Papa said he would have loved hearing a George Carlin podcast, had the platform been available to him. “If I could’ve had my favorite comedian doing a podcast, I’d have been overjoyed.”

Papa’s own “Breaking Bread with Tom Papa” podcast gives him a chance to eat and drink with his guests, drawing on the bonding experience of sharing nourishing time with others.

He also has two radio shows. “What a Joke with Papa and Fortune” is a daily Netflix radio show airing on Sirius XM Channel 93; his monthly show, “Come to Papa Live,” can be heard on Channel 94.

“We’re kind of in this golden age in which everyone can put out their comedy,” Papa said. “My show is purely talking to comedians.”

National Public Radio fans also have heard him as a guest host on “Wait Wait ... Don’t Tell Me!” The quiz show on current events gives comedians a chance to enjoy each other’s talents and poke gentle fun at themselves.

“It really is a great show,” Papa said. “I can’t believe it’s been 25 years it’s been on. ... Even during the pandemic, when we had to do it through Zoom, it’s still refreshing.”

Hearing other comedians’ perspectives provided an enriching sense of comfort during the early months of the COVID-19 pandemic and the disorienting absence of tours, live performances and simple human contact.

“As a comedian, and as a fan, I feel less alone,” Papa said. “They haven’t been out of the house in two months, and now the cat is talking to me.”

Papa’s own household includes his wife, two daughters, a pug and a cat, so don’t be surprised to hear anecdotes in Sunday’s stand-up show that’ll ring true in your own life.

Papa’s two-decade career also has included plenty of television and film projects, which range from hosting “The Marriage Ref” on NBC to a recurring role in “The New Adventures of Old Christine” starring Julia Louis-Dreyfus to his own 2018 Food Network show, “Baked,” in which he shared his love of baking sourdough bread and other delights and explored bakeries across the country.

Fans also will be able to see him on the big screen soon in a new film by Academy Award winners and longtime friends Matt Damon and Ben Affleck. Papa has worked with Damon in previous film projects, including “Behind the Candelabra” and “The Informant,” and he said he enjoyed watching Damon and Affleck working together on the new film.

“Those two are like family, and they have a shorthand,” he said.

“I get to put on a bad tie and do a couple of scenes,” Papa said. “It’s no different than when you were a kid playing dress-up.”

Papa’s previous films include “Paper Spiders,” “Analyze That” and “The Haunted World of El Superbeasto.”

A Virginia puppy rescued from the Envigo breeding facility is ready for her close-up on this year’s Puppy Bowl.

New country music festival in the works for Virginia Beach; could span 8 blocks

City Council will be asked next week to approve a $1.5 million incentive to support it.

"The passing of our kind, hilarious mother, Cindy Williams, has brought us insurmountable sadness that could never truly be expressed," a stat…

"I've been so lucky. It has turned into my dream job," Pellón said. "What's great is, in so many ways, it feels like a family. So many people …

Tickets will go on sale at 10 a.m. Friday at lukebryan.com. Get details at johnpauljonesarena.com.

Tom Pap is shown presenting his "Tom Papa Stand-Up Special" on Netflix. He will bring his 2023 Comedy Tour to the Paramount Theater on Sunday evening.

Tom Papa performs in his Netflix comedy special. He also presents a daily radio show on Netflix, a monthly radio show and a highly rated podcast. His third book, “We’re All in This Together ... So Make Some Room,” will be released June 6.