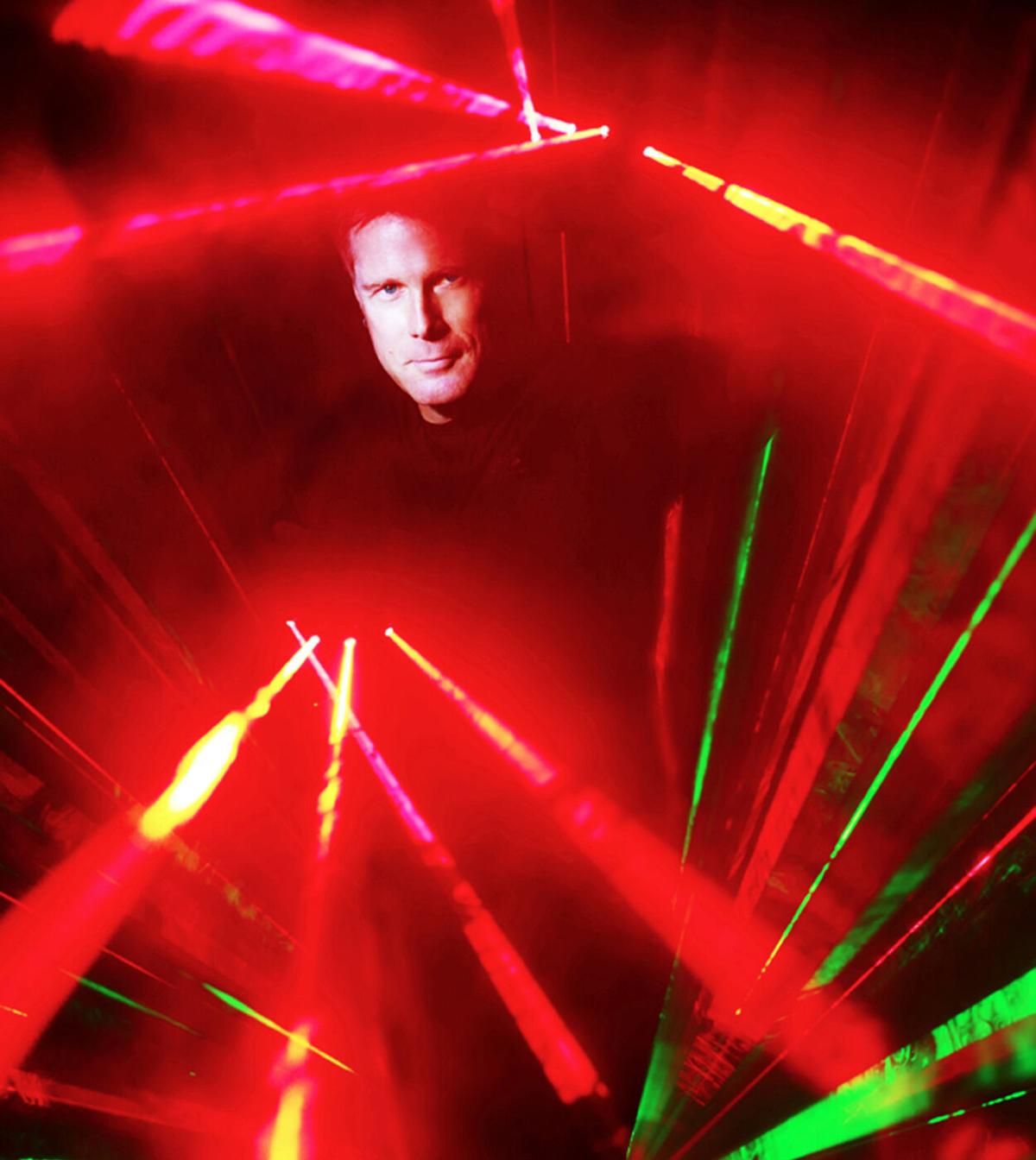 Mark Nizer has added an audience-participation segment to his latest show that will give people a chance to use their smartphones to help fill the Paramount Theater with colorful light. 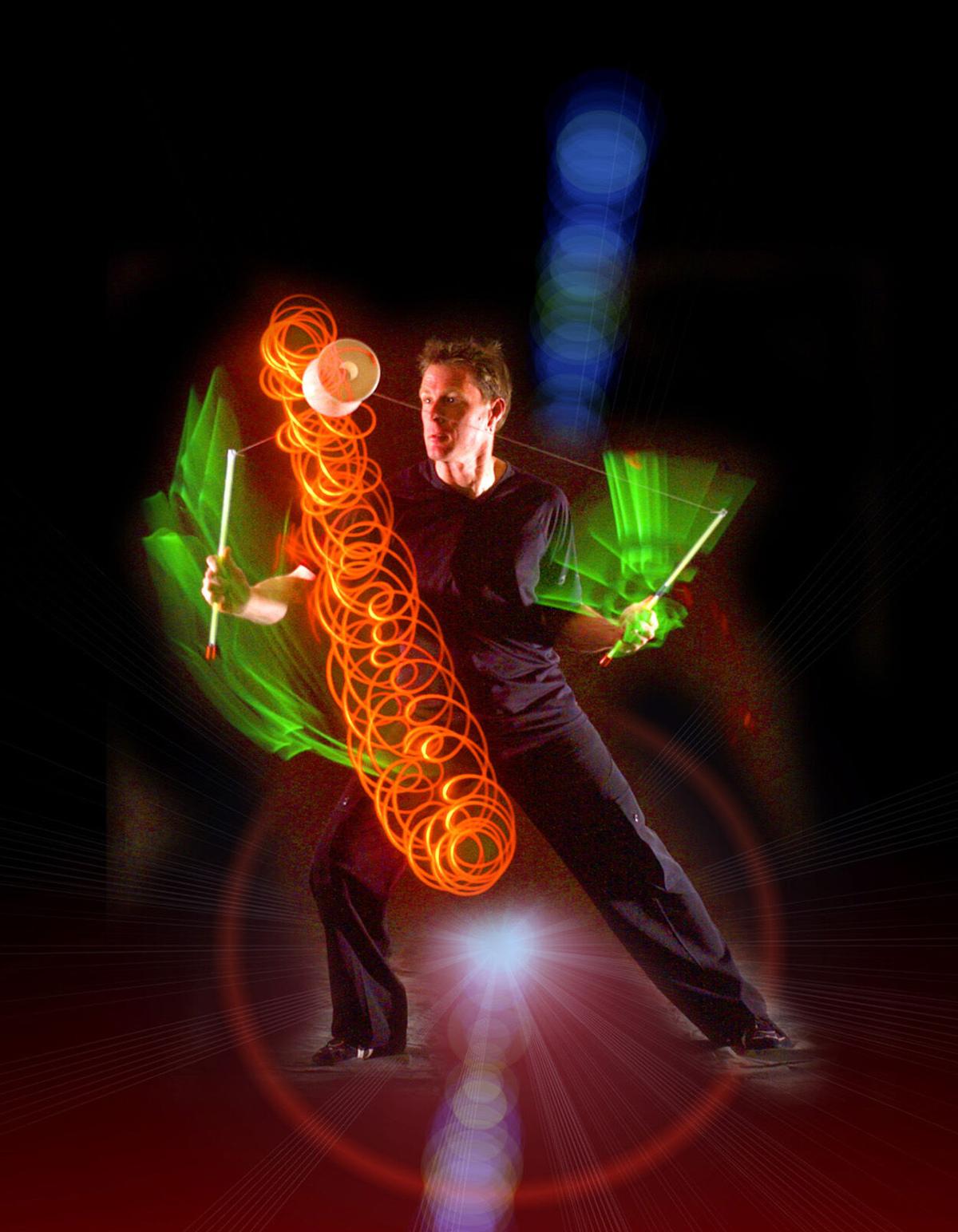 Juggling feats, stand-up comedy and plenty of lights will fill Mark Nizer’s show Friday evening at the Paramount Theater. Technology adds new dimensions to the fun, as shown by more than 5,500 lighting cues planned for the performance, but old-school skill is at the heart of the show.

Mark Nizer’s live show used to have about 20 lighting cues. The “4D” performance he’s bringing to the Paramount Theater on Friday has about 5,500.

But before you start worrying about a tech team dropping from exhaustion, keep in mind that pushing a single button on Nizer’s MacBook Pro puts the whole show in motion.

Audience members who file into the Paramount will receive special glasses for viewing some of the show’s special visual effects, and a “smartphone takeover” segment will invite them to pull up a website on their phones to help fill the theater with color and light.

The glasses will change the way audience members see color fields, which will give the lights and lasers added punch. Reds will appear to move forward, blues to the back and greens and yellows toward the center, which can make the balls and other objects Nizer is juggling seem closer or farther away than they actually are.

“You’d feel as if the balls were way over your head, and the background would feel like it’s way farther back,” Nizer said. “You see [the visual effect] on cereal boxes. Nobody does it live except for me.”

Feel free to choose your own adventure Friday evening. Nizer already has heard from some seniors who are “just not going to wear the glasses, and they won’t experience the color shift,” he said. Folks who don’t feel comfortable with the concept of the “smartphone takeover” don’t need to take part in that segment, either. If you feel more at ease using an iPad instead of your phone, that’s fine, too.

For some audience members, just the thrill of not being told to turn off their phones in a theater setting will feel like getting away with something.

Others may be worried about security risks that relinquishing control in a “takeover.” Nizer gets it; he offers audience members the reassurance that “they just go to a web address, and that’s it. We’re going to use [the phones] as lighting instruments.” Without giving too much away, when hues change on Nizer’s website, they’ll ripple from screen to screen in the audience and fill the theater space with color.

No matter how involved you choose to become, you’re having an impact on the overall experience.

“The best part of the show is the interaction with the audience,” Nizer said. “It’s a big, fun night of comedy and laughter.”

To attend Friday’s show, “you have to be vaccinated, and you have to have a Mac,” he said with a chuckle. “If you could only see my MacBook Pro running the whole show. It’s a thing of beauty.”

Some have asked Nizer if he has become a prisoner of technology.

“It’s the exact opposite of that,” he said. “Instead of being imprisoned by it, I put on the suit, I walk out on stage, and all I need to do is juggle and be funny.

“I am free to just be creative. It’s like literally painting with light. The technology is there, but if it’s done correctly, [audience members] shouldn’t even notice.”

Nizer’s high-tech gadgetry isn’t making his show harder to load in at each venue. “It’s exactly the same every single time, and I don’t have to train anybody,” he said.

Nizer took time to chat after a series of shows in Florida, where getting ready for showtime was “a seamless thing.”

“Last night was so much fun. We had seven hours to load in, and we were done in almost no time,” he said.

If technology isn’t your thing, keep in mind that the time-honored skills at the core of Nizer’s show are in no danger of going out of style.

And no matter how much technology has changed over the years, Nizer’s most ancient nemesis — invisible, but supremely powerful — still lurks right below the action on stage at every show.

“Gravity is a problem,” the artist who has juggled underwater in a shark tank said.

“Juggling is, really, a struggle with gravity, and I don’t always win,” he said. “We’re all on this journey together. That feeling of triumph when I pull this off is amazing.”

Disney projects an $8 billion increase in its 2022 content budget

Disney projects an $8 billion increase in its 2022 content budget

How to cook a turkey: Preschoolers get the last word on the bird

You'll know that your turkey is ready to serve, as Elizabeth advises us, when it turns into chicken, and we can eat it.

The famously biting social critic will be speaking at The Paramount Theater on Thursday.

For a four-decade love story, a tender final chapter

Fred and Mariflo Stephens Heblich treasured their moments together, and their enduring love story brimmed with them. Flowers, cards, legendary…

Casseroles are not the enemy; soul-depleting exhaustion is. So are terror and the dread of the unknown. Healing is a miracle that unfolds on its own timetable, and the best things in life are sturdy enough to be reheated.

Dwayne "The Rock" Johnson recently created an unforgettable moment for one special, and deserving, fan.

No part of corn was ever wasted. The Kernels were cooked and eaten in many different ways. The husks became wrappers for solid foods, or dolls for the children. The stalks were used for fodder for animals. The green cobs were made into sweet jelly and corn syrup.

Two documentaries, "Black and Missing" and "Murdered and Missing in Montana," break the true-crime mold and instead highlight cases of Black and Indigenous women who've gone missing.

This Thanksgiving weekend is offering a box office feast with two genres that have been lacking on the menu so far this year: family movies and non-franchise films aimed at adults.

Mark Nizer has added an audience-participation segment to his latest show that will give people a chance to use their smartphones to help fill the Paramount Theater with colorful light.

Juggling feats, stand-up comedy and plenty of lights will fill Mark Nizer’s show Friday evening at the Paramount Theater. Technology adds new dimensions to the fun, as shown by more than 5,500 lighting cues planned for the performance, but old-school skill is at the heart of the show.