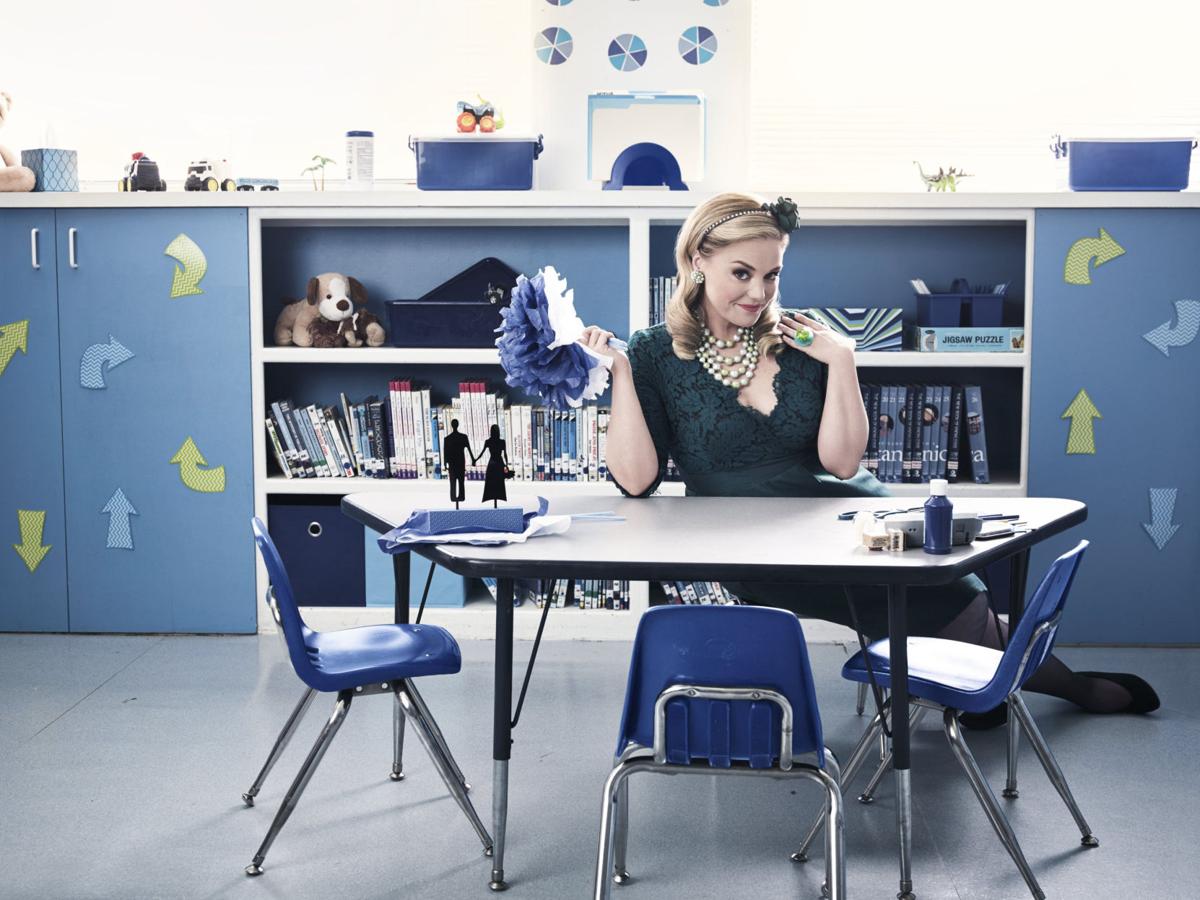 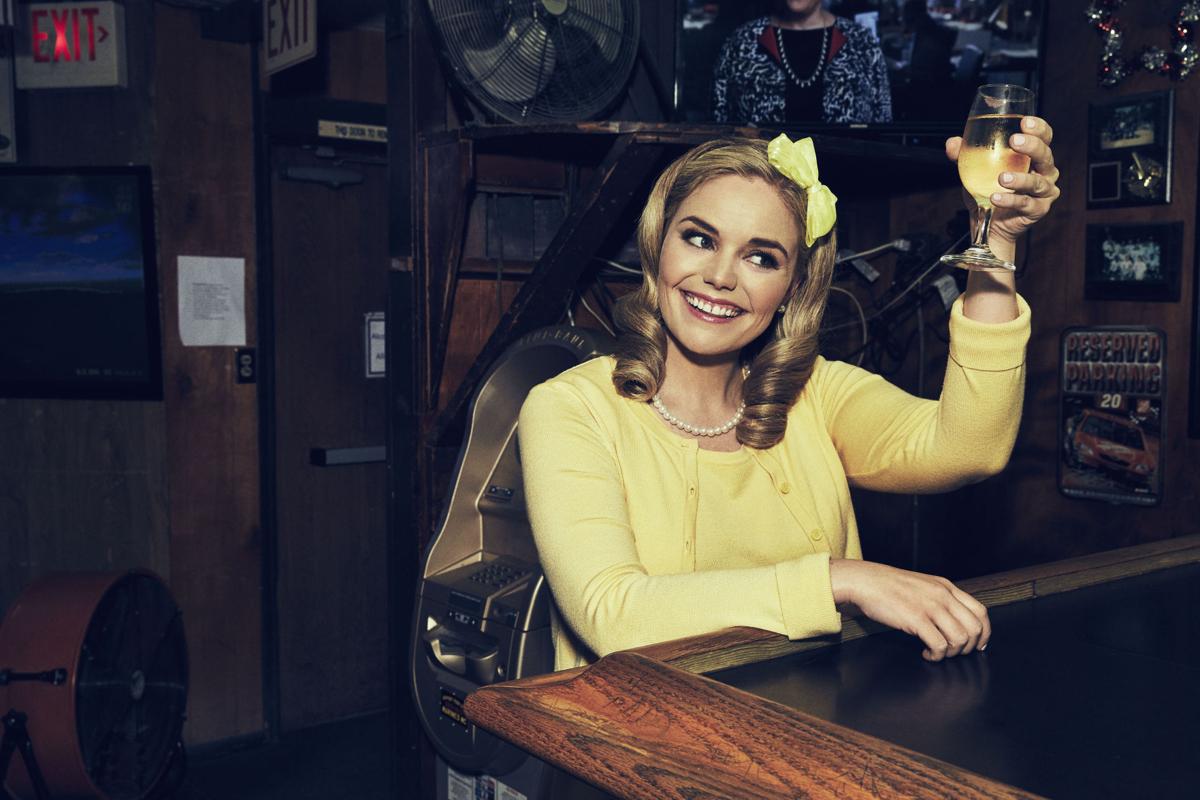 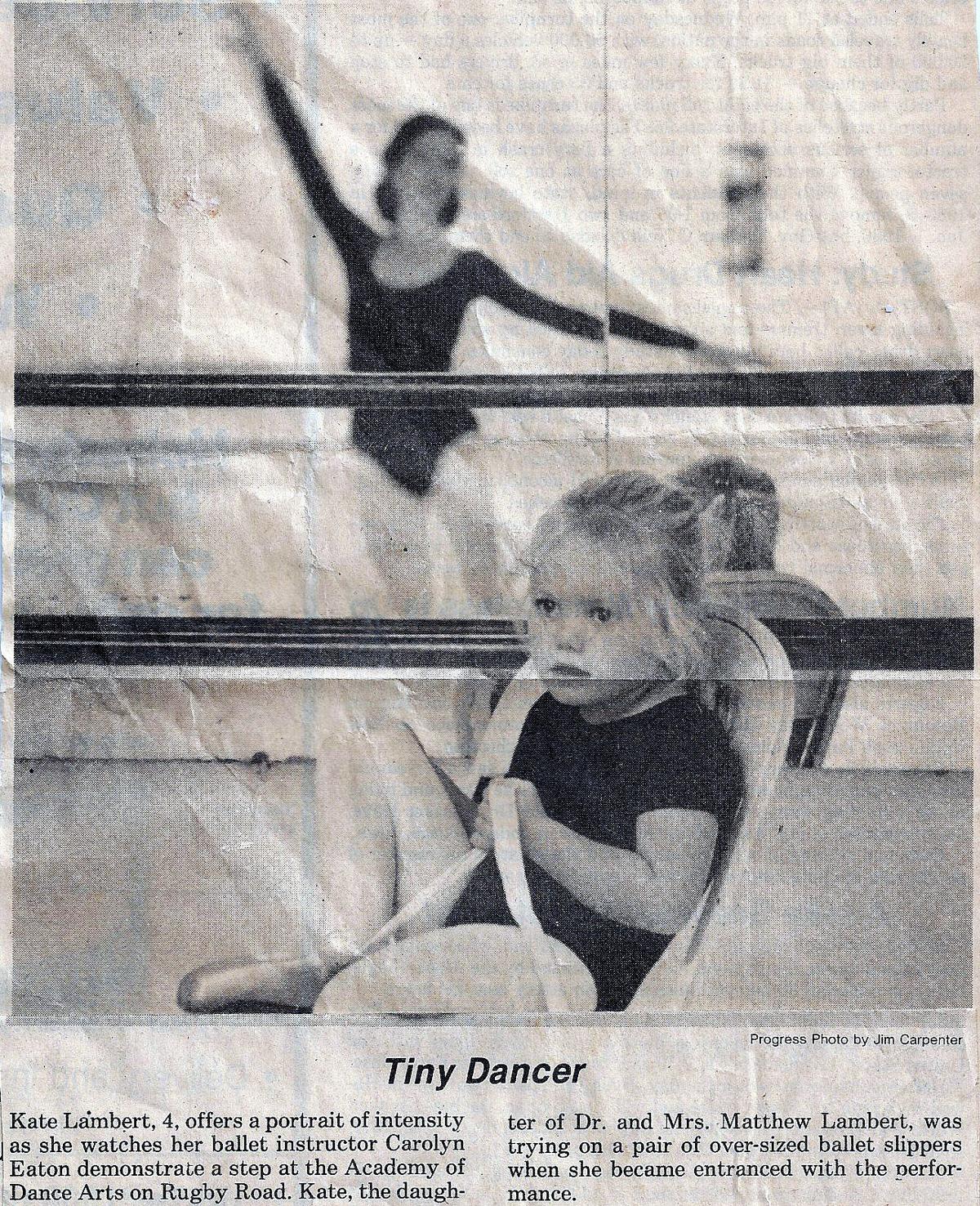 Kate Lambert first made the news more than three decades ago when she was learning ballet at the Academy of Dance Arts in Charlottesville as a 4-year-old.

BY DAVID A. MAURER

The second season of TV Land’s hit comedy show “Teachers” premieres Tuesday evening, and Charlottesville native Kate Lambert is one of the principle forces behind the television program’s success.

In addition to starring in the show, she also helps to write and produce the episodes.

Lambert recently was in town enjoying New Year’s Eve activities on the Downtown Mall. She is now back in Southern California, working on the final shows for the new 20-episode season.

“The show is about six elementary school teachers in a suburb of Chicago,” said Lambert, who portrays teacher Caroline Watson. “They’re all in their 20s and 30s and want to be good at their jobs, but oftentimes, their personal lives get in the way.

“We’re not making a commentary on the teaching profession. We’re just examining six flawed people who happen to be teachers.

“My character is a type-A hopeless romantic who has definite plans for life. But the plan is very off-course.”

The backstory of how “Teachers” became a hit in its first season is a testament to talent, perseverance and the courage to blaze a new path to success. The show’s hilarious, spot-on dialogue and believable scenarios won over many critics and countless viewers, but how it got to television is a study in itself.

Lambert, 35, was born on Thomas Jefferson’s birthday and began her education at Molly Michie Preschool. A born performer, she began to work on her acting skills while attending St. Anne’s-Belfield School.

“My poor parents had to sit through mime shows and plays that I had written,” Lambert said during a recent telephone interview. “It was something I always did.

“When I was at St Anne’s, I was cast as Dorothy in ‘The Wizard of Oz,’ and that was it for me. We moved to Chicago right before I entered the eighth grade.

“I did all the shows I could in high school, and continued that as a theater major at Wake Forest University. When I graduated from college, I was planning on going to New York, but those plans fell through.”

The disappointing detour from the planned career path ultimately proved to be one of those blessings in disguise. It took a while for all the pieces to fall into place for Lambert, but when they did, her career was launched into a high trajectory.

“I was back in Chicago when my plans to move to New York fell through, so I decided to stay there,” Lambert said. “I was working jobs in Chicago that gave me time to audition for parts, but I wasn’t auditioning.

“I was scared. I wanted it so badly that I was afraid that if I did it, they were going to tell me I wasn’t cut out for it. So I avoided it all together.

“About two years later, I decided that improv comedy could be something that I would enjoy. So I wound up doing improv for actors at The Second City. When one of the actors left the main stage at Second City, I got to do that, as well.”

Lambert’s natural knack for comedy, both as a writer and actress, quickly became apparent. When Caitlin Barlow decided to form a group of funny women she knew into a six-member comedy group she dubbed The Katydids, Lambert was an obvious choice.

“The six of us started doing improv shows and, eventually, we started making videos,” Lambert said. “I thought it would be a great way for people to get to know our comedy if we did videos.

“That snowballed into other videos, and a casting director, Matt Miller, came to us with the idea of doing a web series about teachers.”

Television executives were so impressed with the show and its early ratings that less than two months into the first season, they greenlighted it for a second season. They also doubled the number of episodes, the first of which will air Tuesday evening.

“It has been really exciting to have something that started in 2011 in Chicago, and then has expanded beyond our wildest dreams,” Lambert said. “Then, to have it on television with all six of us being able to play the characters, as well as write and produce the episodes, is really exciting.

“And to have an audience that is really enjoying it is wonderful. One of the highest compliments we get is that teachers really like it.

“It’s very exciting that it strikes a chord with them. Maybe they’ll hear something they had wished they would have said in a situation but didn’t, because if they did, they would lose their job. Our teachers aren’t getting fired.”

One of Lambert’s favorite teachers at St. Anne’s-Belfield was Michael Woodfolk. He is now the senior executive director of the Office of Engagement at the University of Virginia’s Darden School of Business.

“Kate was in the top level of the students I taught,” Woodfolk said. “There’s something about her that’s very unique and special. She has a magic — something that I’d call ‘it’.

“Kate was such a kind, thoughtful and quietly charismatic student. The charisma was slightly hidden, because she was not about Kate. Whatever she wanted to do, she wanted to do it to the best of her abilities.

“She was made for the stage, and the stage was made for her. She makes me beam with pride because she is still one of the most selfless people I know.”

Woodfolk is a fan of “Teachers.” Although he left the teaching profession nearly two decades ago, the show resonates with him.

“I think the program gives the teaching profession a platform that recognizes it in a different way,” Woodfolk said. “It elevates the role of the teacher in the life of a school and in the lives of the students.

“The program is wonderful and, in my view, has enormous potential. There’s nothing average about it. They got it right and Kate got it right, and so I’m particularly pleased about that.

“Kate is a star with or without this program. She is inspirational in so many ways, and I think that reflects what a wonderful job her parents did in raising her.”

“Teachers” takes place in fictional Fillmore Elementary School in a suburb of Chicago. In reality, it’s filmed in a closed-down charter school in Woodland Hills, California.

“We essentially have the run of the place,” Lambert said of the former school. “Everyone has an individual classroom, and since it’s supposed to be in the suburbs of Chicago, we built fake hallways, because the schools in California have breezeways.

“The first day I arrived on set to start shooting the episodes for our first season, I saw that I had a trailer with my name on it. I was like, ‘Oh, my god, is this real life?’ It’s so thrilling, and I’m grateful for it every single day.”

One of the upcoming episodes has all six teachers getting in trouble, and for their punishment, they’re ordered to go through a team-building ropes course. Call in the stunt doubles.

“You would never think that in a show about elementary school that we would use stunt doubles, but we actually used them a lot,” Lambert said. “Our teachers are often getting themselves into sticky situations.

“It’s such a mind-melt to see one of your friends in front of you, and out of your peripheral vision, you see someone who looks exactly like them. The only way I can describe it is that it’s like when you’re parked in your car, and a car next to you starts moving in reverse and for a second you think it might be you moving.

“I often arrive at work at 5:30 in the morning, so the days can be long. I have fallen asleep on my couch at 9 in the evening more times than I care to admit.”

None of the success that Lambert and her colleagues are now enjoying likely would have occurred if not for their taking the lead in their own careers.

“The reason the Katydids formed, and the reason why we did the work we did, was because we realized we couldn’t wait around for someone to cast us,” Lambert said. “Or wait for someone to put us into a role we wanted to play.

“That’s the reason why we were able to do as much as we did. We were very motivated to put ourselves out there, along with the things we had designed.”

Lambert’s parents recently moved back to the Charlottesville area. Their daughter couldn’t be happier about it.

“I’m now getting to go back to Charlottesville on breaks, which is so nice,” Lambert said. “I love going to Bodo’s Bagels, and my mom is an interior designer, so I enjoy going to antique malls with her.

“We were on the Downtown Mall on New Year’s Eve, and it was so great to be back. I love it down there.”

David A. Maurer is a features writer for The Daily Progress. Contact him at (434) 978-7244 or dmaurer@dailyprogress.com.

Banksy shares video of him creating his latest artwork

Banksy shares video of him creating his latest artwork

Movies in a Minute: "Raya and the Last Dragon"

Movies in a Minute: "Raya and the Last Dragon"

LONDON (AP) — Prince Philip has had a successful heart procedure at a London hospital and is expected to remain for several days of “rest and recuperation,” Buckingham Palace said Thursday.

Harry, Meghan to delve into tough royal split with Oprah

The time has finally come for audiences to hear Meghan and Harry describe the backstory and effects of their tumultuous split from royal life.

Zoom fails, an emotional tribute to Chadwick Boseman, plus a fiery Jane Fonda were some of the big moments from the 78th Golden Globe Awards.

» “Miscegenation” by interdisciplinary artist LaRissa Rogers will open Friday in the gallery windows at The Bridge Progressive Arts Initiative.

The four video recordings will be shared for free through the end of May at cvillechambermusic.org.

Busy month of art and identity begins Thursday with ''The Art in Life: Comic Books'

Kluge-Ruhe and The Fralin teamed up to create "The Art in Life" because "art is all around us, and the museum is not the only place to find it," said Lauren Maupin.

Jefferson-Madison Regional Library branches will present the following virtual events this week. To learn how to register and participate, go …

Palace to investigate after Meghan accused of bullying staff

LONDON (AP) — Buckingham Palace said Wednesday it was launching an investigation after a newspaper reported that a former aide had made a bullying allegation against the Duchess of Sussex.

The 'Nomadland' life: 'It's hard but it's healing,' says Bob Wells

For the real-life van dwellers who appear in “Nomadland,” life hasn’t changed drastically since the film was released.

Kate Lambert first made the news more than three decades ago when she was learning ballet at the Academy of Dance Arts in Charlottesville as a 4-year-old.