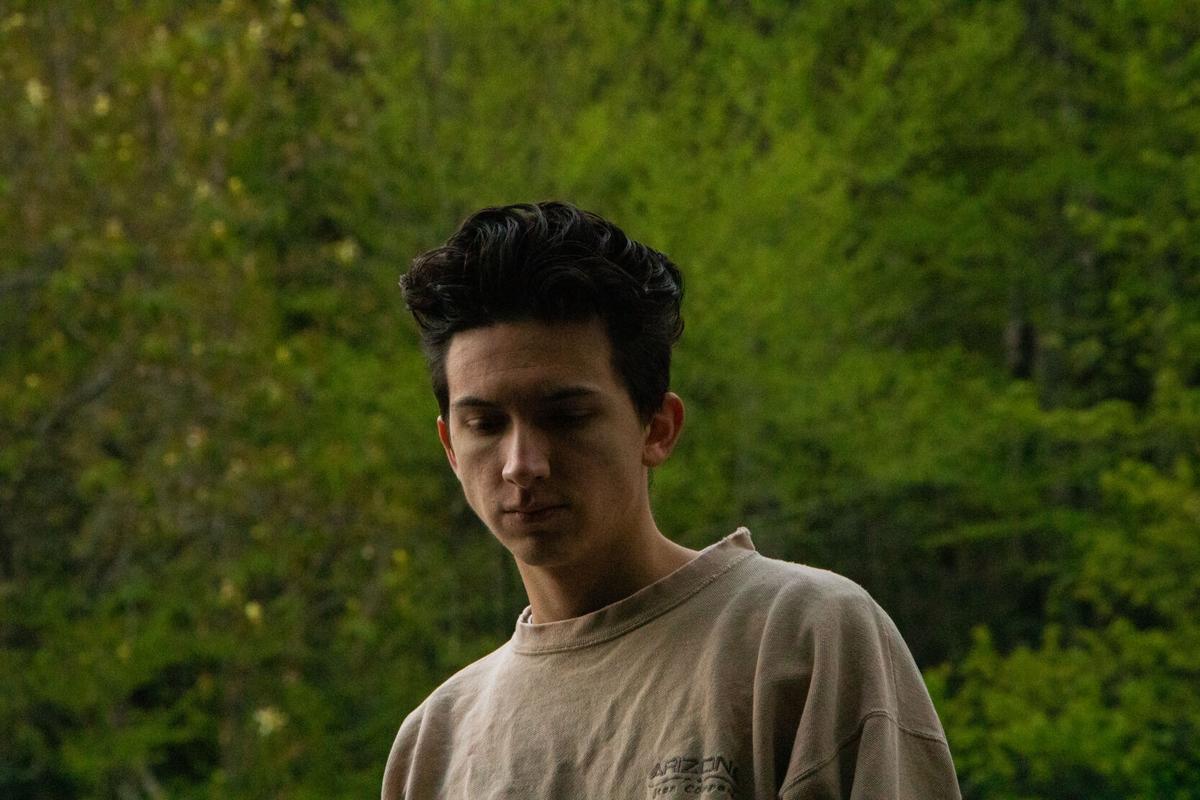 Charlottesville songwriter Andrew Montana’s latest single is “Strawberry,” which he said tells a tale of “loving someone despite their flaws and the pain they cause.” 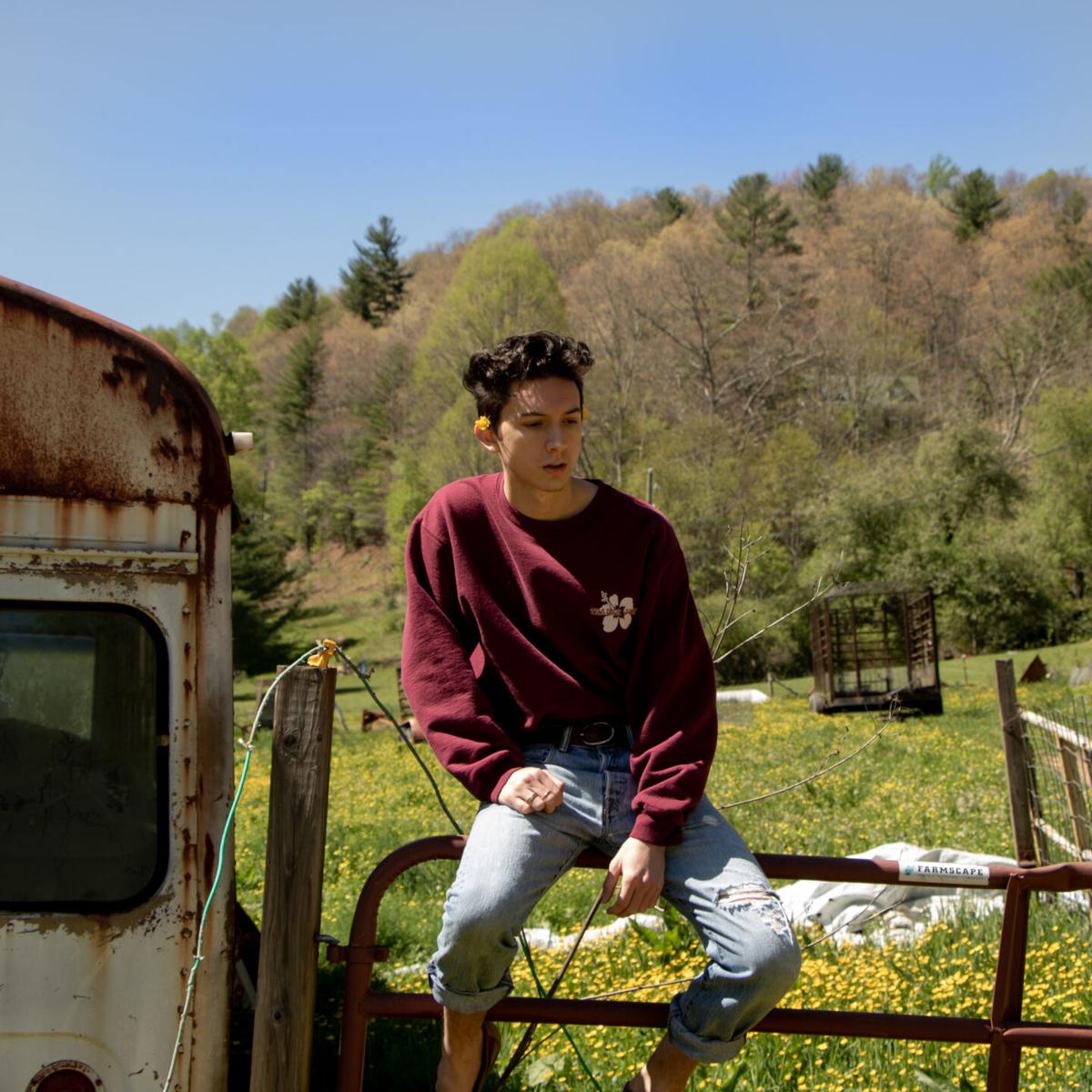 Creating his debut album during a pandemic called on Charlottesville songwriter Andrew Montana to take some creative approaches. Instead of mapping out a schedule of tour dates, Montana is building an audience through TikTok and releasing singles to keep listeners engaged. “Strawberry,” which he released in May.

Andrew Montana spent the month of May recording music for his debut album, “Azalea, Holly,” in a stretch of the Blue Ridge Mountains that’s famous for its rhododendrons.

Montana holed up “deep in the woods” in a part of Cullowhee, North Carolina, that seemed “a little too remote” at times, said Montana, who released the single “Strawberry” on May 21.

Getting cellphone reception for a phone interview involved a five-minute drive away from his cabin, for one thing. Then there’s the local fauna.

“There are bugs in the cabin the likes of which I’ve never seen before,” he said with a chuckle.

But while he was recording songs that are destined for his debut album, Montana soon discovered that the mountain setting fueled his creativity by tying two of his favorite activities together. Inspired in part by a grandfather who has run more than 30 marathons — “he’s a maniac,” Montana said proudly — the Charlottesville songwriter has been devoted to running for the past two years, and his time in Cullowhee gave him an opportunity to stoke his musical fires with satisfying runs in an inspiring environment.

“I think about music all the time,” he said. “I really don’t stop. Running helps me breathe through it and not stress out about it.”

In Cullowhee, “we are at the base of a giant hill, so we run straight up — and it is hell,” Montana said.

“I have a spiritual experience every time. You pass this crest where the sun just breaks through everything. It’s like looking at God. It’s just beautiful.”

Mile after mile, the music remains his main focus. “It’s very specific to me; it’s what I know,” he said.

Montana wants to keep his carefully crafted songs as accessible as possible. He aims to welcome new listeners into his world without keeping them at arms’ length with artifice.

“I write songs, first and foremost. Someone who doesn’t speak English can get it,” he said. “Just understand that, even if you don’t relate to the lyrics, the song is to be enjoyed. I’m not trying to make you work for it. I don’t ever want people to feel ostracized.”

The plant-themed title of his inaugural album is a fond shout-out to a botanist great-grandfather who wrote books about azaleas and hollies. Azaleas reveal their colorful glory in the springtime, while holly gets the spotlight in the winter months, when fewer greens compete with its shiny leaves and its red berries offer a pop of color against the snow.

Montana savors the contrast between winter and spring, and he sees parallels to the nature of love. Relationships have seasons, after all. His musical explorations often dive into the notion of “loving someone while really not liking aspects of them,” he said.

“Strawberry,” the first single from his debut album, is “a folk song about love, commitment and murder,” Montana said. He wrote it last fall while walking in his neighborhood, and he recorded it in March at Virginia Arts Recording.

The song’s absurdist approach has won fans online, which helps Montana build a loyal audience in a post-pandemic musical environment that calls for new ways of doing things.

The San Bernardino, California, native was studying art at the University of California, Berkeley when the pandemic arrived. “I was wearing a mask and getting weird looks from people,” he said.

“If this were the ‘90s, we’d be releasing three singles and an album,” Montana said, but limits on gatherings in 2020 to protect potential audience members from COVID-19 put the brakes on a tour like the one he had to call off in June 2020.

One year later, he has more than 20,000 followers on TikTok, and “I am still building momentum,” Montana said.

He may release another six singles before the completed “Azalea, Holly” is in listeners’ collections, and Montana is committed to reaching people where they are.

“Right now, I’m trying to connect with as many people as possible,” he said.

Kim Kardashian is in a legal tussle over new brand name

ZZ Top bassist Dusty Hill dies in his sleep at 72

ZZ Top bassist Dusty Hill, one of the Texas blues rock trio's bearded figures, died at his Houston home, the band announced Wednesday. He was 72.

If you've missed the sense that attending weeknight shows feels like getting away with something, keep your sunscreen, water bottle and dancing shoes close at hand, because August promises to help you catch up on the musical connections you've been missing.

7 great song and artist documentaries to rock out to

A good sound system makes a difference for any movie, but especially for one about music.

Tickets for the 22nd annual festival, presented by co-artistic directors Raphael Bell and Timothy Summers, will go on sale soon at cvillechambermusic.org.

“Donda," which was slated to release last Friday, is now due Aug. 6.

Eric Clapton said he won't perform at venues requiring COVID-19 vaccines after a UK announcement that vaccine passports will be mandatory at crowded venues.

Charlottesville songwriter Andrew Montana’s latest single is “Strawberry,” which he said tells a tale of “loving someone despite their flaws and the pain they cause.”

Creating his debut album during a pandemic called on Charlottesville songwriter Andrew Montana to take some creative approaches. Instead of mapping out a schedule of tour dates, Montana is building an audience through TikTok and releasing singles to keep listeners engaged. “Strawberry,” which he released in May.