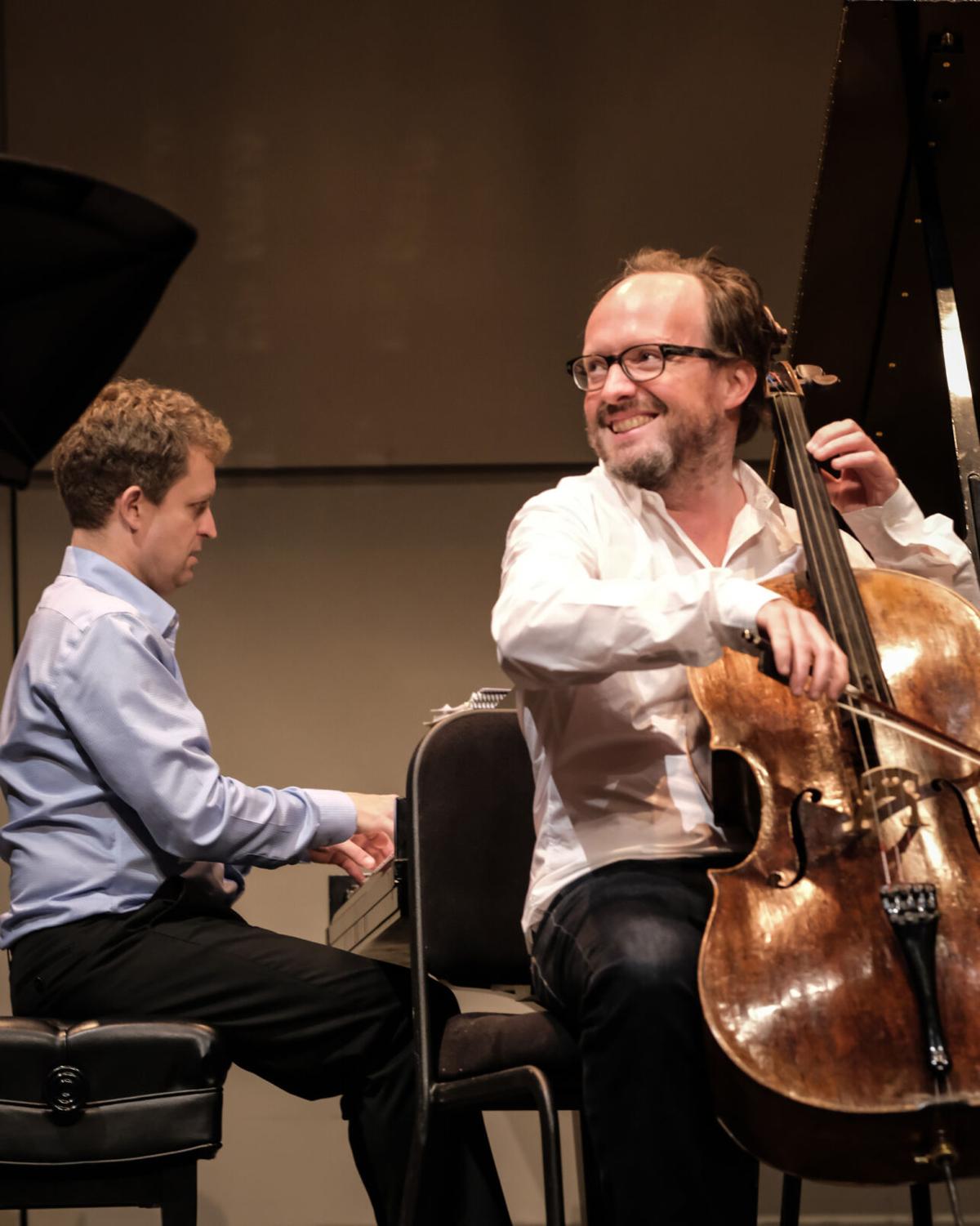 Pianist Andrew Armstrong, left, and cellist Raphael Bell will perform in the Charlottesville Chamber Music Festival, for which Bell is co-founder and co-artistic director. The series opens Thursday evening. 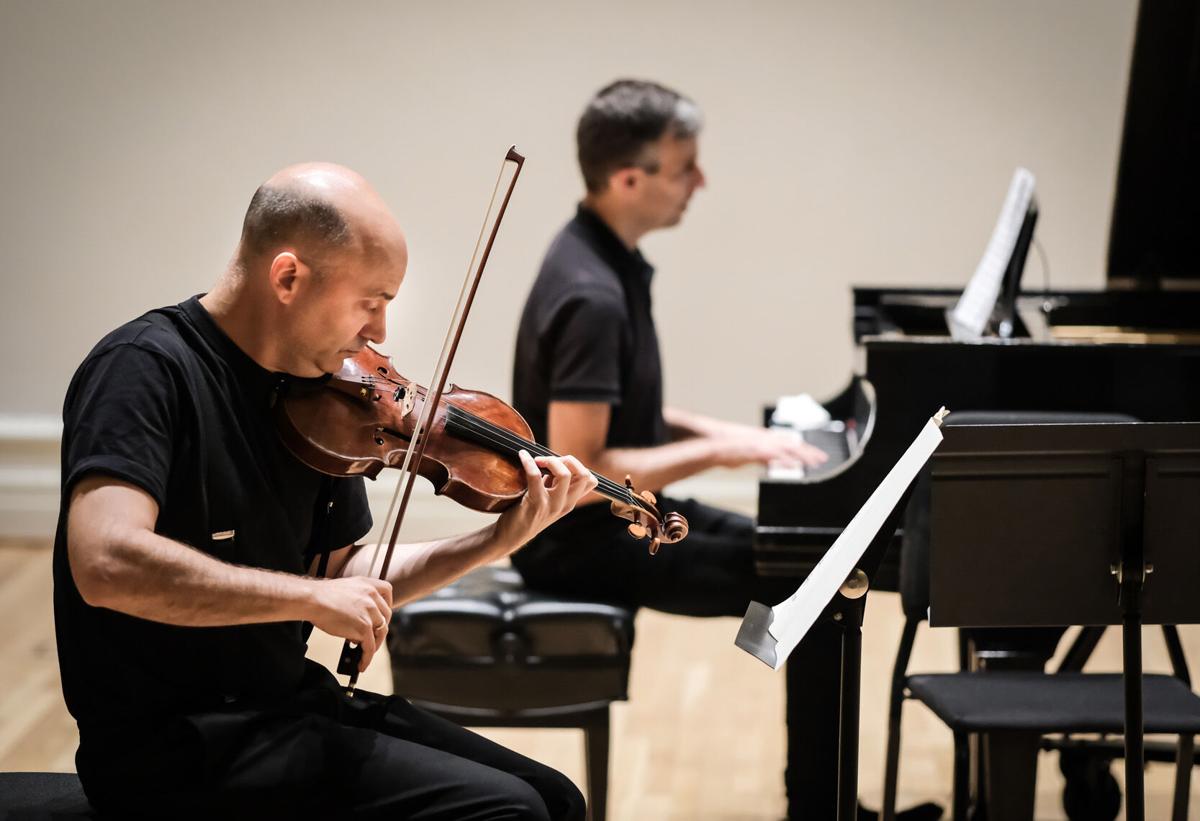 Yearning to attend live concerts again after a long pandemic-fueled delay? Hoping you can listen from the safety and comfort of home instead? This year, fans of the Charlottesville Chamber Music Festival have options.

The festival, led by co-founders and co-artistic directors Timothy Summers and Raphael Bell, opens Thursday evening for listeners who look forward to settling into seats at the Paramount Theater. Audience members also can buy tickets to livestreamed performances if they prefer.

The livestreamed performances can be viewed by ticketholders of live and virtual concertgoers alike through Sept. 30 at cvillechambermusic.org.

David McCormick, the festival’s executive director, said offering both options will help make sure audiences can relax and focus on the music without worrying about whatever monkey wrenches the ongoing COVID-19 pandemic might wield at any given time.

“There were many months of uncertainty in the planning stages. Is everybody going to be vaccinated at this point? Will things really be opening up?” McCormick said. “I think now we have a plan that will survive almost anything.

“What we’ve done is add a livestream component so our patrons will be able to watch the events no matter what. We’re actually really excited about this. People can watch it 20 times if they want, because they bought that in-person ticket.”

Listeners who aren’t comfortable with the idea of returning to an audience setting during the pandemic aren’t the only ones who can enjoy the livestreams. Fans who discover an appealing new composition or composer on a program can listen repeatedly and savor the experience, McCormick said.

“We had a very strong and positive response pretty much as soon as we announced,” McCormick said. “They’re ready to put on a mask and be safe and come to concerts. Our festival is the first indoor event of the new season, so it’ll be interesting to see where classical fans are.”

This year’s festival offers a five-concert series, plus the popular Free Community Concert and a special event planned for 7 p.m. Monday at King Family Vineyards. “Bach to Bluegrass” will bring violinist Tessa Lark and her “Stradgrass” fiddling style to the vineyard’s Carriage House, where audience members can hear a Vivaldi concerto for dueling cellists and snack on hors d’oeuvres.

This year’s Free Community Concert is set for 12:30 p.m. Friday at the Paramount. Performers will include violinists Amy Schwartz Moretti, Lark and Summers; violist Cords; cellists Arron and Bell; and pianists Andrew Armstrong and Lukas Vondracek. The event is indeed free, but registration is recommended.

There also will be a Pop-Up Concert at 8 p.m. Sept. 18 in the Quirk Hotel Charlottesville’s Art Gallery. No advance registration is needed, and the music is free.

The five-concert series begins at 7:30 p.m. Thursday at the Paramount with a program featuring Jessie Montgomery’s “Rhapsody No. 1 for Solo Violin,” Ludwig van Beethoven’s “Piano Trio in D Major, Op. 70, No. 1, ‘Ghost,’” and Dvorak’s “Piano Quartet No. 2 in E-flat Major, Op. 87.” The musicians include violinists Moretti and Summers, violist Cords, cellists Arron and Bell and pianists Armstrong and Vondracek.

The program for the second series concert, set for 3 p.m. Sunday in Cabell Hall Auditorium at the University of Virginia, will include Beethoven’s “Piano Trio in E-flat Major, Op. 70, No. 2,” Cesar Frank’s “Sonata in A Major for Violin and Piano” and Dvorak’s “Piano Quintet No. 2 in A Major, Op. 81.” Performers include Ehnes, Lark, Summers, Cords, Arron, Bell, Armstrong and Vondracek.

The fourth series concert brings soprano Rachel Calloway; violinists Soovin Kim, Nicholas DiEugenio and Summers; cellist Bell; and pianist Mimi Solomon to Cabell Hall Auditorium at 7:30 p.m. Sept. 17. The program includes Charles Ives’ “Sunrise for Voice, Violin and Piano,” Amanda Röntgen-Maier’s “Violin Sonata in B minor” and Johannes Brahms’ “Piano Trio No. 1 in B Major, Op. 8.” This concert will be presented in celebration of the life of Carolee Copeland.

Benjamin Rous, music director of the Charlottesville Symphony at the University of Virginia, will conduct; Calloway, Kim, violist Ayn Balija, Bell, Suggs, Solomon and percussionist I-Jen Fang will perform. Summers will play both violin and viola. This concert is dedicated to the memory of Sheridan Winthrop Wood Nicholson.

There’s no telling whether surging cases of COVID-19 variants eventually will lead to future closings or cancellations, but after honing versatility and flexibility during the pandemic, the festival is ready to move forward with a bigger toolbox.

“I really believe that a lot of the skills we’ve learned over the past 18 months are things that we shouldn’t stop doing,” McCormick said, adding that previous livestreams were greeted by viewing parties at local retirement communities. “Classical music is definitely back.”

Masks are required to attend the Paramount Theater concerts, and proof of vaccination against COVID-19 or of a negative test within 48 hours before the concert will be requested to enter the theater. UVa requires masks indoors, regardless of vaccination status, and buffer zones of empty seats are automatically created around seats reserved by concertgoers; unvaccinated audience members must wear masks outdoors as well while on UVa Grounds. King Family Vineyards requires masks inside the Carriage House unless people are actively eating or drinking.

Before you head out for an in-person concert, it’s a good idea to check for last-minute updates of safety requirements at cvillechambermusic.org and the venue’s website (theparamount.net, uvapolicy.virginia.edu, kingfamilyvineyards.com). Make sure you have a mask with you. Festival officials also recommend bringing a photo ID and keeping a photo of your vaccination card on your phone so you can get in if you forget to bring the card itself.

For the virtual series of livestream concerts, single tickets are $15, $4 for students, and a discounted virtual series subscription for all five series concerts is available for $60 and $16, respectively.

Demi Lovato thinks the term 'aliens' is 'derogatory' to extraterrestrials

Lovato explained that they do not believe that beings from another planet mean to harm humans.

Teamwork brings Tuesday Evening Concert Series back to the stage

When violinist Cho-Liang Lin returns to the University of Virginia’s Cabell Hall Auditorium at 7:30 p.m. Tuesday to help open the Tuesday Even…

Adele's new single, 'Easy On Me,' has finally dropped. So what's the verdict?

Reactions to Adele's new single are in. Listen to "Easy On Me" here.

Coldplay gets galactic with album 'Music of the Spheres'

"Vivaldi represents a wonderful opportunity for people who don't think they like classical music," Hughes said.

"The arts are to help people connect to themselves and each other," Grant said. "I put on makeup, I puff my hair and I put on a cute outfit. But I always see myself as a facilitator."

Pianist Andrew Armstrong, left, and cellist Raphael Bell will perform in the Charlottesville Chamber Music Festival, for which Bell is co-founder and co-artistic director. The series opens Thursday evening.