In “Orphan Doll,” director Healy Lange uses color sequences to depict her main character’s painful present and black-and-white segments to explore her attempts to cope with her grief. It’s part of the “Women in Film” edition of the Indie Short Film Series. 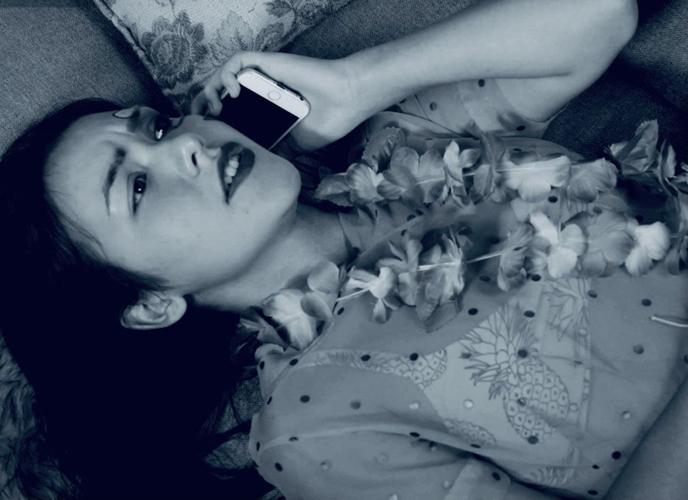 In Healy Lange’s film “Orphan Doll,” a teen copes with a painful moment i her life by role-playing telephone conversations. The film can be seen in Saturday’s Indie Short Film Series.

The director had no idea during filming how differently men and women in the audience would view what was unfolding in front of them.

“The reaction I get from men is, ‘Is she crazy?’ ‘Does she have multiple personality disorder?’” Lange said. “The reaction from the women is, ‘Bless her heart.’”

When “Women in Film,” the eighth installment of the Indie Short Film Series, begins at 7:30 p.m. Saturday at Vinegar Hill Theatre, audience members can make up their own minds about what is happening when the teen starts role-playing in imaginary telephone conversations.

It’s her attempt to regain her bearings while struggling to answer her father’s question about visiting her ailing mother.

“She’s coping, and not in the best way,” Lange said of the teen character played by Celine Alva. “She’s trying to avoid this extremely painful conversation that’s going to change her life at 16.

“At 16, you have no power. You have to do whatever you’re told. You can’t tell your father, ‘No, I don’t want to see my mother in a nursing home.’ She’s finding a way to cope with the grief. The minute she says, ‘I’ll be right there,’ everything changes.”

Saturday’s “Women in Film” program will screen up to eight short films by national and international filmmakers. A panel discussion with women filmmakers will follow the screening, offering time to learn more about their processes and approaches.

Lange, who’ll be making her first Charlottesville appearance, chose to use color sequences to depict her character’s painful present and black-and-white segments to explore her phone conversations.

“The color is brutal, because the reality of her life in this moment is brutal,” Lange said. “Life is not black and white. There are many different shades of gray, and there are different ways of coping.”

And no generalizations are absolute. Lange said that she spoke with a man in one of her screening audiences who totally grasped what the character was going through. He told her his own mother had died while he was in high school.

“Grief does not look the same [to everyone]. If you’re in the first, most difficult loss of your life, it’s a lot of change,” Lange said.

The scene can remind audiences that just because a grieving person is emotionally overwhelmed, it doesn’t necessarily mean he or she is mentally ill.

“It’s not a linear film,” Lange said. “It’s not super clear in the movie what’s happening at first.”

“Orphan Doll” allows room for individual interpretations because “grief is not a formula. I feel like people should have permission to grieve and not be ‘normal’ to anyone else, and get help if they need it,” Lange said.

For folks who haven’t walked with grief and need another way to relate to the character, Lange pointed to the common experience of coming up with an appropriate response today for a conversation you fumbled last night.

“You get in the car, and you have the conversations you wish you’d had,” Lange said. “She’s just having her moment in her room, which is a safe place.”

Indie Short Film Series founder Ty Cooper invites filmmakers who bring diverse viewpoints in short films that local audiences otherwise might not get to see outside a festival setting.

Film fans viewing the “Women in Film” program will be able to glimpse different cinematic approaches to universal moments.

Lange penned “Orphan Doll” at a time when pain in her own world was sweeping her back to the turmoil of teenhood.

“At the time that I wrote it, my mother had dementia,” she said. “I felt kind of frustrated and kind of powerless, and I was afraid I might never see her again.

“I feel like this [film] kind of exorcised a lot of things for me.”

Doors will open at 7 p.m. Tickets are $20; get them in advance online at https://isfswomeninfilm.eventbrite.com, and bring your photo ID to pick them up at the door.

Filmmakers who’d like to submit their work for future events in the series can go to www.filmfreeway.com/indieshortfilmseries.

Her riveting performance as the cruel and calculating Nurse Ratched in "One Flew Over the Cuckoo's Nest" won her an Academy Award. She was 88.

Actor and wrestling legend John Cena broke the World Record for most wishes granted through the Make-A-Wish Foundation.

REVIEW: 'See How They Run' (sorta) tweaks the whodunit

VAFF, Monticello team up for film about Levy family

The full program of films, events and guests for this year's festival will be announced on Oct. 11, and tickets will go on sale on Oct. 18. For information, go to virginiafilmfestival.org.

'The Woman King' comes for the throne

When “The Woman King” rises up in theaters on Sept. 16, it will emerge as a potent force on a movie landscape that has seldom seen something like it. Drawing from the real 19th century history of the Agojie, women warriors who defended the West African kingdom of Dahomey, present-day Benin, “The Woman King” is muscular action-drama that puts female power front and center at a time when women’s rights are seen as imperiled. Viola Davis stars as their general, Nanisca. “The Woman King” will premiere at the Toronto Film Festival in early September before Sony Pictures opens it in theaters.

DVD REVIEW: 'Sound of Metal' tests the boundaries of senses

If you didn’t get to see “Sound of Metal” when it was in its Oscar run, do watch it now. Available on DVD, it’s a mesmerizing journey into the world of the deaf.

Director Tommy Haines shoots and scores with “Hockeyland,” a compelling look at two teams in Minnesota’s high school hockey world. Filmed during the 2019-20 season, the documentary leans into the sacrifice, the heart and the drive that propels the athletes.

25 of the best movie remakes of all time

Here's a look at the 25 best movie remakes of all time, according to IMDb.

Louisiana-native Lainey Wilson is having a breakout year as she tops the Country Music Association nominations in her first year as a nominee, earning nods in six categories. Wilson earned critical success with her song “Things a Man Oughta Know,” leading her to nominations in album of the year, female vocalist and song of the year. Wilson is only the fourth artist in the history of the CMAs to earn six nominations in her first year. Other leading nominees include Ashley McBryde, Carly Pearce, Chris Stapleton and writer-producer Shane McAnally. The CMA Awards, hosted by Luke Bryan and Peyton Manning, will air Nov. 9 on ABC.

In “Orphan Doll,” director Healy Lange uses color sequences to depict her main character’s painful present and black-and-white segments to explore her attempts to cope with her grief. It’s part of the “Women in Film” edition of the Indie Short Film Series.

In Healy Lange’s film “Orphan Doll,” a teen copes with a painful moment i her life by role-playing telephone conversations. The film can be seen in Saturday’s Indie Short Film Series.