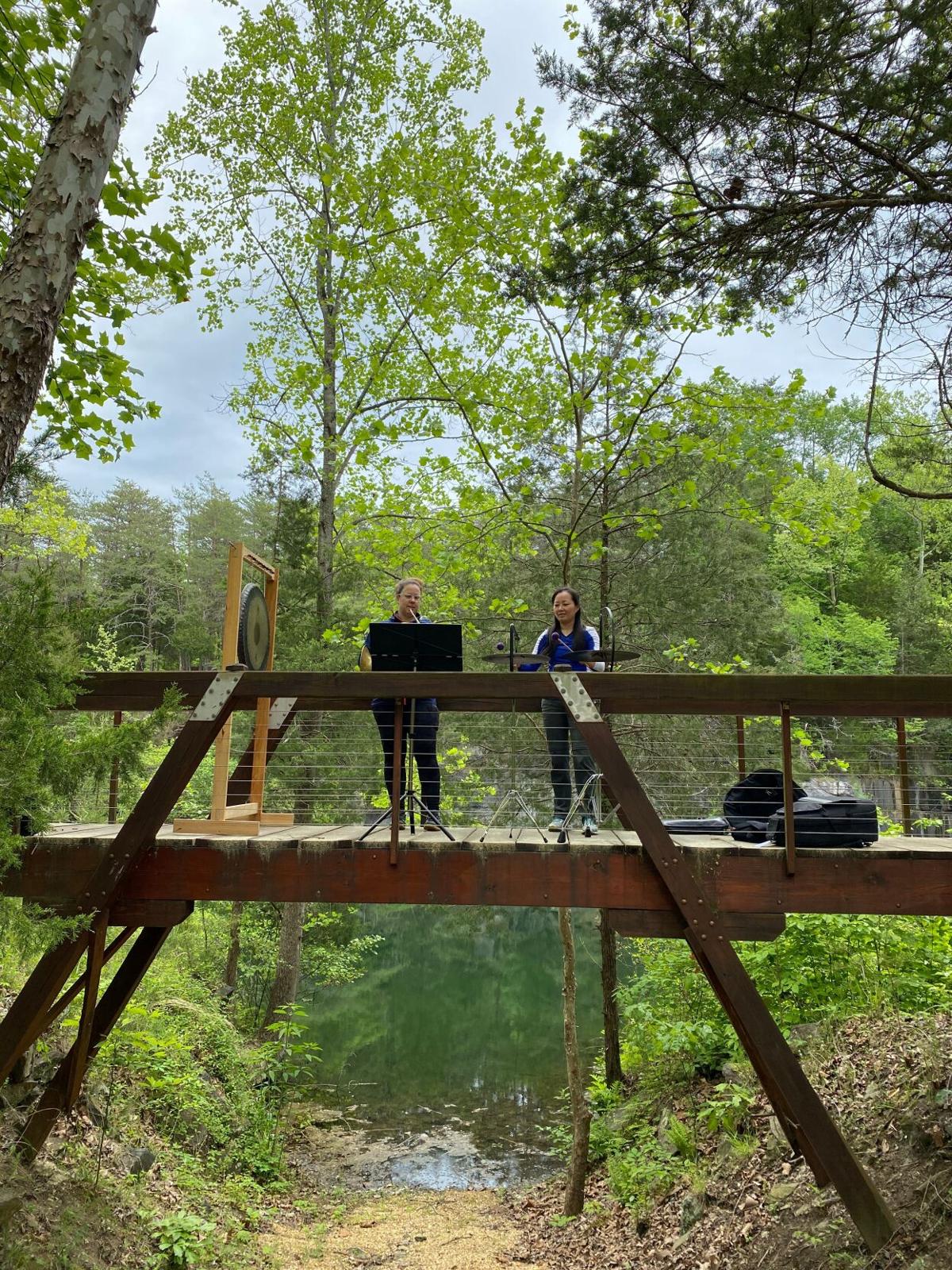 The instrumentalists in "Soundflight" will be sharing a variety of percussion instruments, brasses and accordion, as well as alphorn, an instrument designed to be played outdoors. Frogs at the site seem to be impressed by the French horn.

"After the first show sold out in four minutes, we added a show that sold out to our waiting list," said Miriam Gordon-Stewart, Victory Hall Opera's artistic director and co-founder.

"Soundflight" will bring two Metropolitan Opera singers — tenor Adam Diegel and dramatic soprano Tracy Cox — to the quarry with percussionist I-Jen Fang, Katy Ambrose on French horn and other brass instruments and accordionist and composer Simone Baron. Together, as they explore what encountering opera can mean to a 21st-century world that can find it difficult to unplug and step outside to remember what sunshine feels like, they've been making some interesting discoveries while performing in nature.

"The obvious upside is that audiences do not have the opportunity to experience acoustics outside very often," Gordon-Stewart said. "Microphones don't capture opera voices the way they were trained to project." The downside is the unpredictability of the weather, so the company built in two rain dates.

"It's magical hearing music outside," she said. "It's a chance to hear nature's own set of instruments and animals."

Some of those animals already have voiced their approval of Ambrose's work in particular.

"We did a little sound check out there, and the frogs are responding very much to the French horn," Gordon-Stewart said.

In addition to hearing the richness and complexity of the trained voices in the quarry setting, audience members will be able to savor an instrument that isn't heard frequently in our neck of the woods: the alphorn.

"Most people probably have not heard it live in its natural environment," Gordon-Stewart said. "It's designed to sort of echo out over the hilltops."

Tickets were limited to 50 per performance not only to help provide safe distances between audience members, but also to allow listeners to immerse themselves in the beauty of the quarry environment. For Victory Hall Opera, it's a time to approach the shared moment between singers and listeners as an experience, rather than a concert. Gordon-Stewart said the distinction offers "that added feeling of experiencing that people have been missing during the pandemic."

"This is site-specific performance," Gordon-Stewart said, in what she called "a magical find. We programmed to suit this landscape."

The Quarry Gardens at Schuyler, home to more than 800 species of plants, is offering a comfortable combination of creature comforts and adventure. The acoustics and beauty were enticing, and having a visitor's center, restrooms and parking sealed the deal.

"We knew immediately we'd found an environment that had everything we needed," Gordon-Stewart said.

For the singers and instrumentalists, a setting that is at once intimate and immense is a nurturing welcome back into the world of performing in front of audiences and building musical connections.

"During the pandemic, every singer in the world was out of work," Gordon-Stewart said. "Being a performer is a calling. It's the reason we were put on this earth."

Performers and audience members will share something special. "They're also going to be experiencing something they've ever done before," she said.

Audience members can start the evening at the Visitor's Center to learn more about the history of soapstone mining in Nelson County and the work that owners Bernice and Armand Thieblot have done to turn the quarry into an inviting space for guests. Before the music begins, there's time to eat and relax; picnics are welcome, and pre-purchased meals from Feast! can be reserved.

The sold-out performances of "Soundflight" will be presented at 6 p.m. Saturday and Monday at The Quarry Gardens at Schuyler, which is at 1643 Salem Road in Schuyler. The rain date for Saturday's performance is 6 p.m. Sunday; the rain date for Monday's is 6 p.m. Tuesday.

Keep in mind that there will not be seating, and that the event will require audience members to walk around a half-mile trail. For all the details, go to victoryhallopera.org.

Justin Bieber is the latest celebrity ambassador for Balenciaga

Justin Bieber is the latest celebrity ambassador for Balenciaga

Be There: Weigh in on Live Arts shows; mark calendars for 'A Christmas Carol'

Head to livearts.org to make reservations for the "A Conversation with the Community" Zoom events, which are free.

Broadway on the cusp of a vibrant rebound

"Things are changing so dramatically that what we were thinking two weeks ago is not what we're thinking now," said Charlotte St. Martin, president of the Broadway League, the trade group representing Broadway producers and theater owners.

Show finally going on for 'Moon Over Buffalo'

The instrumentalists in "Soundflight" will be sharing a variety of percussion instruments, brasses and accordion, as well as alphorn, an instrument designed to be played outdoors. Frogs at the site seem to be impressed by the French horn.