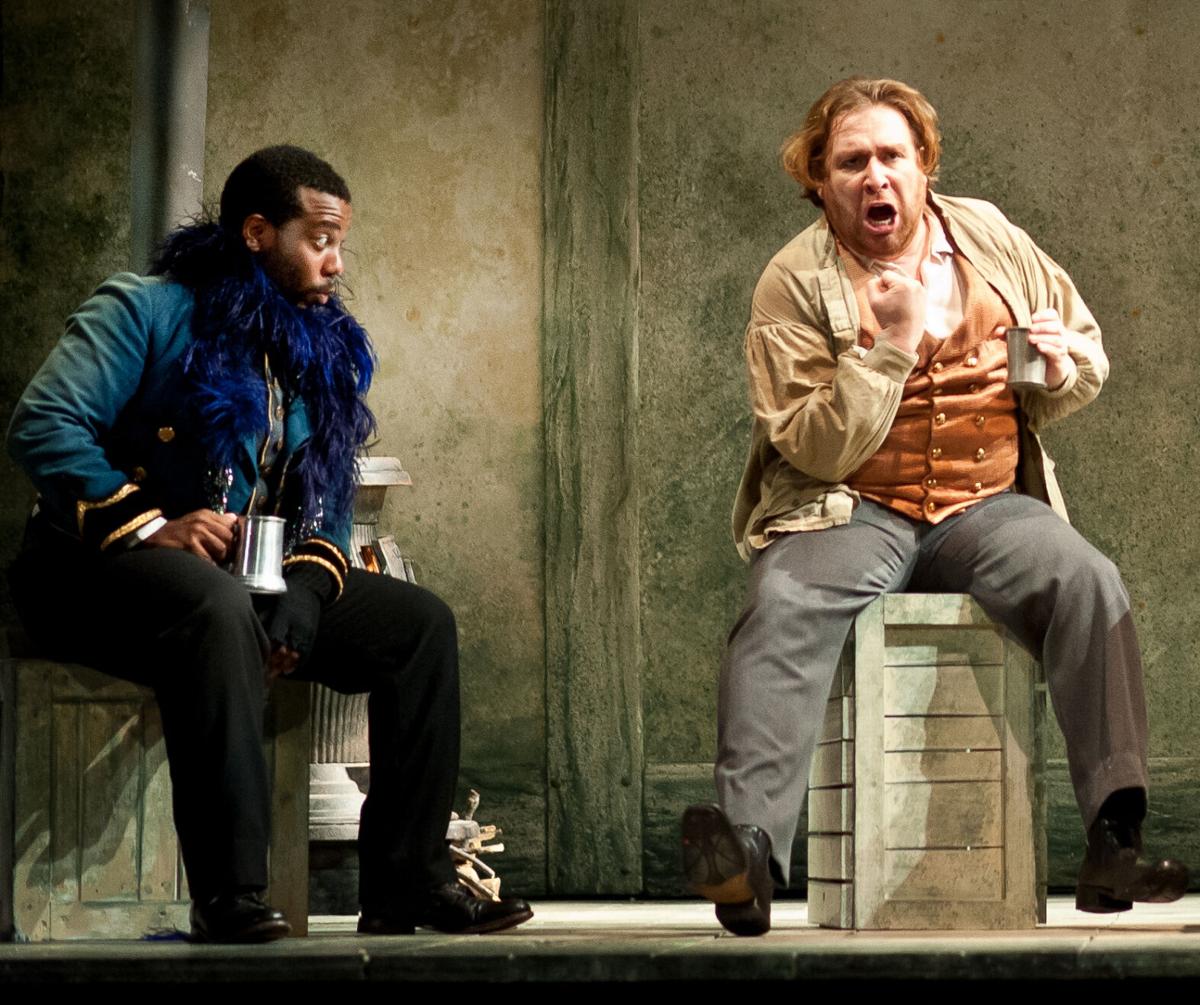 Opera fans who enjoyed Charlottesville Opera’s 2013 production of “La Bohème” can look forward to a fresh version this summer that moves the setting to the vibrant 1960s. It will be presented outdoors June 24 and 26 in the newly renamed Ting Pavilion.

For its 43rd season, Charlottesville Opera will move the action of “La Boheme,” shown in a 2013 production, into the creative and turbulent 1960s. The new season begins this weekend with outdoor performances of “Broadway in the Park” in IX Art Park. Next on the schedule, on June 17, is “Opera in the Park,” an evening of opera favorites.

In years past, Charlottesville’s opera fans spent summer evenings settling into seats among the boxwoods at James Monroe’s Highland estate. They listened to stirring arias as stars began shimmering in the sky behind the stars on the stage. And, if you were lucky, you might hear a peacock shrieking its approval of a coloratura soprano’s sparkling turn.

This weekend, Charlottesville Opera is heading back outdoors to open its 43rd season, keeping pandemic safety precautions in mind while offering a fond nod to tradition. Performances of “Broadway in the Park” will begin at 7 p.m. Friday and Saturday at IX Art Park, and although listeners will hear some ambient traffic sounds, no peacock feathers will be ruffled in the making of the music.

For listeners, it’s an opportunity to get outside and spend a summer evening revisiting favorite musical theater songs and soaking in new-to-you Broadway tunes.

“We’re really running the spectrum of all these musicals,” said Christina Deaton DeMarea, general director of Charlottesville Opera. “This is a time when we need art, and it can do many things. We really want people to have some sense of joy and affirmation in the midst of all this hardship.”

John de los Santos is the director and Josephine Lee serves as conductor.

Jennifer DiNoia has appeared as Elphaba in “Wicked” more times than any other singer, taking the role to four countries in seven companies.

“She also has done work with DMR, so she’s no stranger to Charlottesville,” DeMarea said.

Allison Danielle Semmes sang the role of Diana Ross in the Broadway tour of “Motown the Musical.”

“She’s just top talent,” DeMarea said of Semmes, who also has performed in “The Book of Mormon” and written and recorded music for herself and Stevie Wonder.

Greek American soprano Sharin Apostolou, who is Ader Artist-in-Residence at Charlottesville Opera, also will be in the spotlight. Local audiences will remember her 2019 turn as Guenevere in “Camelot” and her 2015 debut as Eliza in a “My Fair Lady” production under the former Ash Lawn Opera moniker.

Also singing will be tenor Victor Ryan Robertson, known to local audiences for his work with Victory Hall Opera; he is the only person to have made his debut at the Kennedy Center, Metropolitan Opera and Broadway in just one season.

Bass Branch Fields, also known for extensive performance experience with opera companies and symphony orchestras, made his Broadway debut in the 2008 Lincoln Center Theatre production of “South Pacific,” in which he was the understudy for the role of Emile de Becque.

Together, they’ll be presenting songs from a wide variety of popular Broadway musicals ranging from “My Fair Lady” to “Dear Evan Hansen.” The event promises to be what a familiar tune from “State Fair” would call a grand night for singing.

The concert is 80 minutes, and there won’t be an intermission.

Next weekend, it’s time for some opera favorites. “Opera in the Park” will begin at 7 p.m. June 17.

Performing the operatic highlights will be stars on the rise who are called “young artists” in the industry.

“The operatic voice takes some time to develop,” DeMarea said, and Charlottesville Opera has a long tradition of offering singers between about 25 and 35 gain valuable experience performing in front of audiences, participating in mock auditions and soaking in coaching while they’re on their way.

“They’re more like athletes than, say, painters,” DeMarea said. “It’s a different kind of art. One of the great contributions Charlottesville Opera makes is to help these young singers get their development.”

What audience members will notice is the skill the young artists already bring to their craft. “They are already accomplished singers,” DeMarea said.

Then it’ll be time to get ready for “La Bohème,” which Charlottesville Opera will present at 8 p.m. June 24 and 26 in the newly rebranded Ting Pavilion at the east end of the Downtown Mall. The timeless story of young bohemian artists dealing with love and loss while they sacrifice and toil for their art has been relocated to 1960s Paris.

The youth-centric “La Bohème” is a perennial favorite with audiences, and envisioning it amid the artistic creativity and political, economic and cultural turmoil of the 1960s offers opportunities for reflecting on the deeper examination of systemic racism, political division and other issues that has taken place across the United States over the past year.

Although the action will take place outdoors in Ting Pavilion, “nothing we’re doing is traditional,” DeMarea said with a chuckle. “Nothing like this has been done in the Pavilion.”

The streamlined 90-minute production enables audience members to enjoy the story and the singing while staying safely physically distanced from others — and without spending hours in the summer heat. It’s part of Charlottesville Opera’s goal to “meet people with what they need and want,” DeMarea said.

“We knew we’d be outside, so we didn’t want super-hot costumes,” DeMarea said. Sweltering wigs aren’t needed to depict the 1960s, either; in keeping with a decade in which hair lengths and styles spoke volumes about one’s views and position in society, “we wanted to use people’s natural hair.”

“Our country is taking a good, hard look at our culture,” she said. “ ‘Bohème’ is a love story, first and foremost, but it’s about these wealth disparities. Mimi dies because she doesn’t have the luxury of money and health care.”

Frank Bonner, star of 'WKRP in Cincinnati,' dead at 79

Anthony Mackie to host the 2021 ESPYs

Anthony Mackie to host the 2021 ESPYs

Clowdus' outdoor production of 'Oklahoma!' coming to Roseland in August

The classic musical is filled with well-known songs, including "Oh, What a Beautiful Mornin'," "I Can't Say No," "The Surrey with the Fringe on Top" and "People Will Say We're in Love." The farm setting will include live animals and a 200-year-old barn.

'Broadway in the Park' shifts to two Saturday performances

The program of favorite Broadway songs will be presented twice, at 5:30 and 8 p.m. Saturday. The change replaces the previously scheduled single 7 p.m. show.

She was chosen from among more than 140 applicants from across the country.

Opera fans who enjoyed Charlottesville Opera’s 2013 production of “La Bohème” can look forward to a fresh version this summer that moves the setting to the vibrant 1960s. It will be presented outdoors June 24 and 26 in the newly renamed Ting Pavilion.

For its 43rd season, Charlottesville Opera will move the action of “La Boheme,” shown in a 2013 production, into the creative and turbulent 1960s. The new season begins this weekend with outdoor performances of “Broadway in the Park” in IX Art Park. Next on the schedule, on June 17, is “Opera in the Park,” an evening of opera favorites.