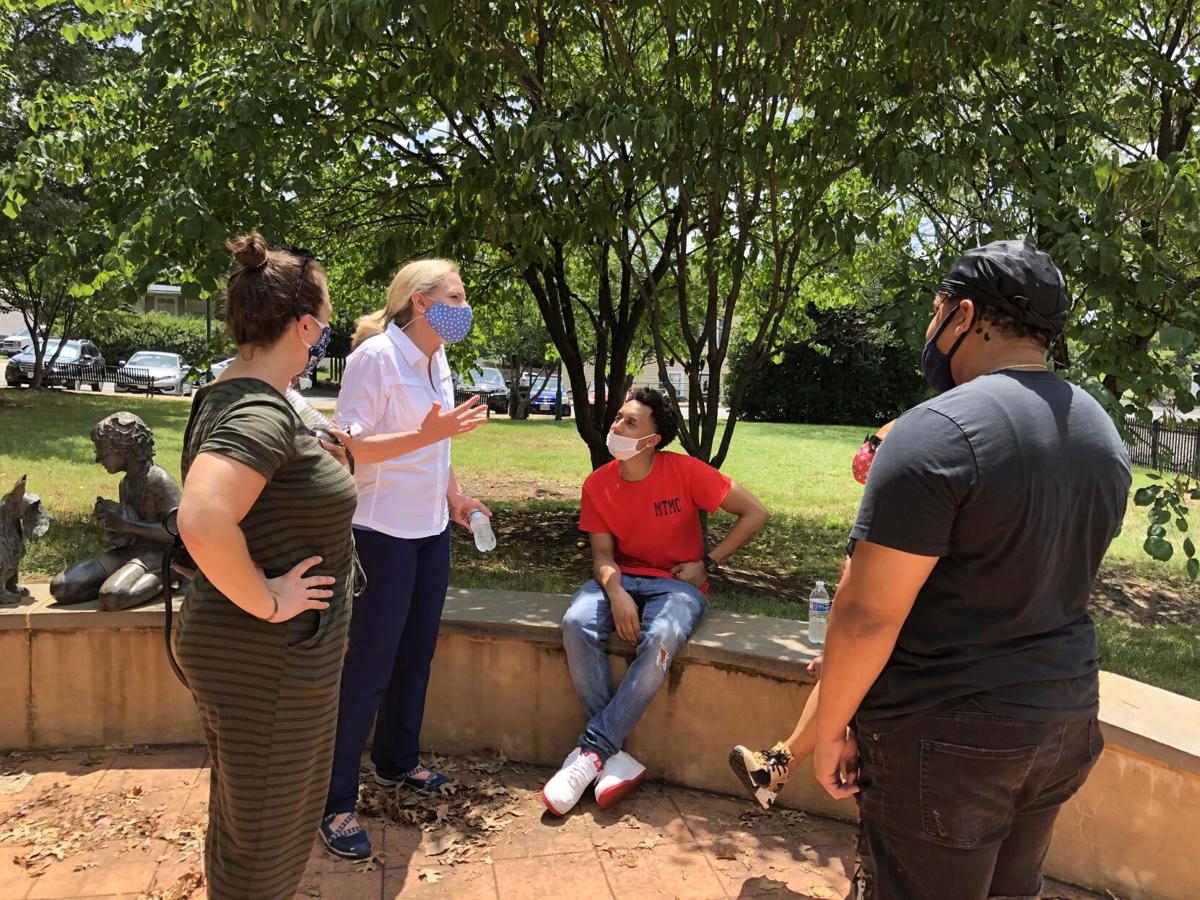 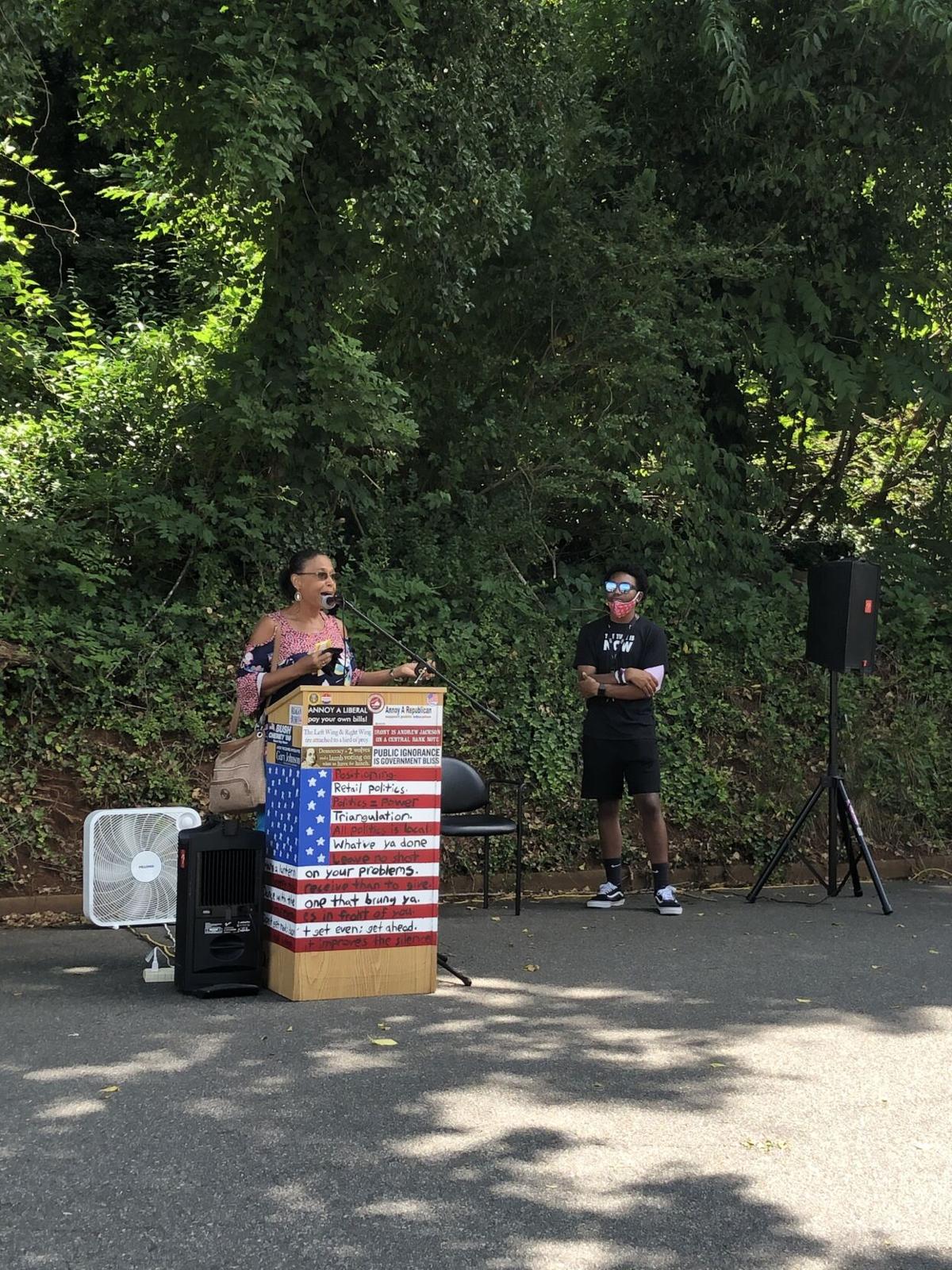 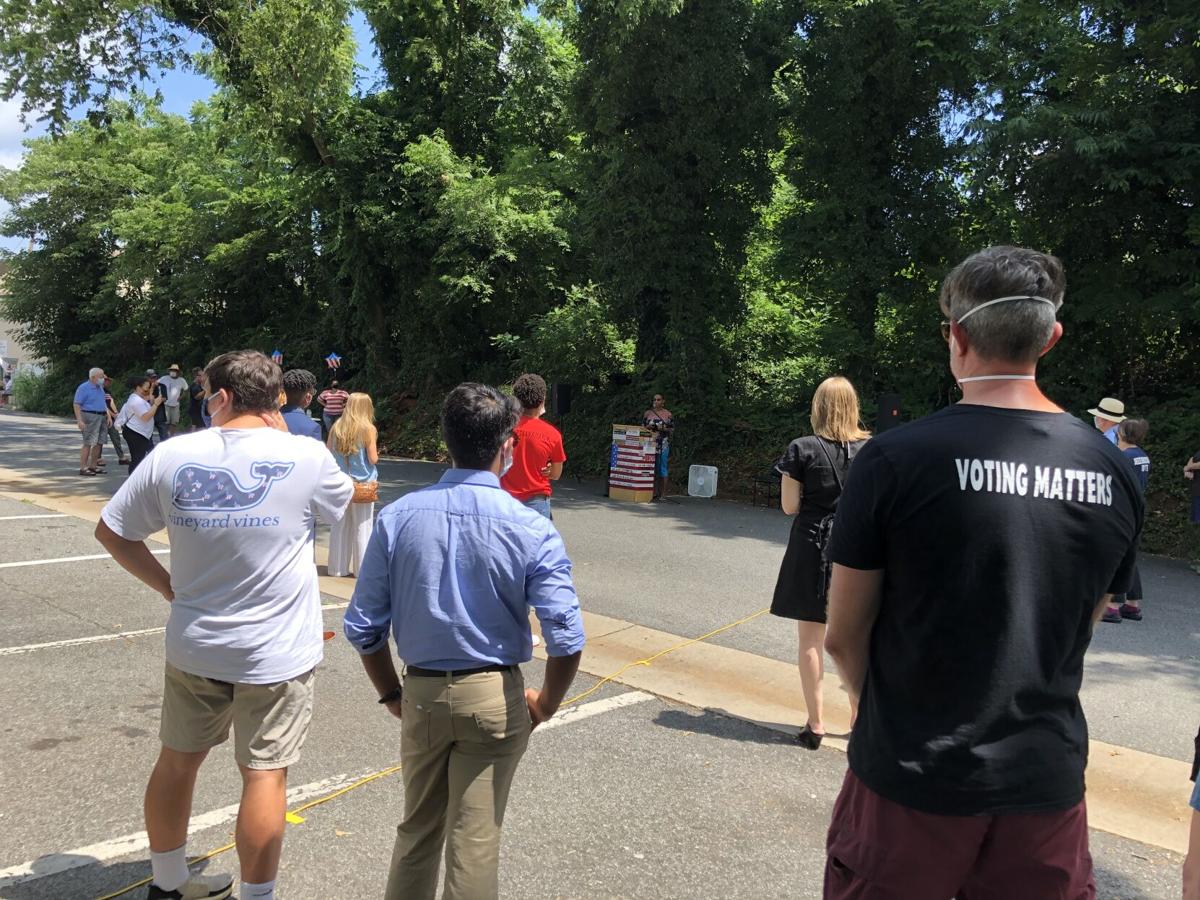 About 50 people turned out for the event on a sultry Saturday.

On Saturday in Orange, a diverse group of activists, some young and others with decades of experience, exhorted their fellow citizens to register to vote—and get to the polls on Election Day.

The public gathering on Short Street was a “voting block party” sponsored by a new group called More Than a March Coalition and organized by young community activists. The purpose was to raise awareness of voting rights and register new voters. About 50 people of varying ages, all wearing masks in keeping with COVID-19 safety protocols, listened intently to a series of speeches punctuated by leisurely intermissions. When the speeches hit high notes of eloquence, audience members shouted words of affirmation into the sultry air as cicadas sang in the background.

Trenton Matthews, a rising senior at Orange County High School, leaned into the microphone on Short Street and said, “I’m 17. I can’t vote. I turn 18 in February, so I miss the election. So many of you are probably wondering, ‘Why does he care so much? He’s 17.’

“Stand up for what is right”

Later in the program, longtime Orange educator Ernestine Reid said the job of older people is to support and encourage young citizens eager to engage in the political process, and “if we can’t do this, we need to shut our mouths.”

According to Tracy Rollins and Diane Shoultz, who sat at a voter registration table, only five new voters signed up during the event that ran from 10 a.m. to 2 p.m. But among those five was a 70-year-old woman who has never voted before. Rollins and Shoultz smiled as they recalled the woman’s delight in knowing her voice would be heard in the next election.

“Not a partisan issue”

Orange resident Dani Rivera welcomed the audience and pointed out that Dr. Dena Jennings was offering screenings and tests for COVID-19 outside her Short Street office. In the spirit of a true block party, Rivera noted that Orange native DJ Marvelous was providing the music between speakers, and Barbara’s Soul Food Truck was selling refreshments.

She then turned over the microphone to Myles Johnson, a 2020 OCHS graduate who has played an active role in recent “Black Lives Matter” marches in Orange. Warm and friendly, well known to many in the group, the young master of ceremonies called out the slogan emblazoned on his black t-shirt: “The time is now! Voting matters!” He drew cheers when he wiped off the microphone before turning it over to the next speaker.

“Thanks for keeping us safe, Myles!” someone called out.

O’Brian Martin, a rising OCHS senior, was another young, powerful voice who drew enthusiastic applause as he spoke on the importance of voting. After his speech, he commented on the event: “It’s great. I love having all the people here having fun. But I just want to say, this is not a partisan issue. This is really about being an American and doing our civic duty.”

Adding to the youthful spirit of the day was Salaar Kahn, age 18, a Henrico County resident who will serve as a delegate to the Democratic National Convention.

Spanberger: “The promise of this country”

The day’s most prominent speaker was Rep. Abigail Spanberger, who represents Virginia’s 7th District in Congress.

A regular visitor to Orange County, Spanberger made a point of acknowledging local speakers in her remarks. She said, “I got here just in time to hear O’Brian’s speech, and I think the first words I spoke to him were ‘When do I get to vote for you?’”

She also credited Reid, whose words had moved her. She said Reid aptly described “the mission of ensuring that people know that their voices are important and that we, generation after generation, are meant to lift each other up and put our country back on a path toward ever better progress.”

“For anyone who feels anguish or heartbreak over where we are with a global pandemic, over where we are over hard conversations about our racial history and the death of unarmed black men and women in our society, we are also at a point of hope. We are at a place where people say, ‘We need to make progress, and we will stand up for what is right.’

“And what is right are issues of equality and justice and if we are working to engage all of our community members, and if we are working toward justice in our communities, in our towns, in our commonwealth and in our country, we will continue to fulfill that ever-present, but so far-off at times, promise of what this nation is and can be. And it is up to all of us to realize the promise of this country.”

“Let’s remember that we are part of this beloved community, and together we can make positive progress. And on the days when it feels hard, I will hearken back to the last words that I heard John Lewis speak. On June 4, on a conference call, he got on and he spoke beautifully and eloquently about who we are as people, where we are as a nation, the progress that he dreamed to see and the hope that he saw.”

She said Lewis was thrilled by the peaceful protests taking place in the nation and ended his conference call by saying, ‘My friends and my family, be brave, don’t get weary and let’s continue to work.’”

Back at the voter registration table, Rollins and Shoultz were on board with that. Both spoke of their fervent commitment to community activism.

Rollins said, “When George Floyd’s daughter said her daddy changed the world, she was right. He changed me.”

And Shoultz vowed that voter registration was a first step on a long journey: “I’m not going to stop.”

Hilary Holladay covers education and politics for the Orange County Review. The author of five books, she is currently writing a biography of the poet Adrienne Rich.

After the Voting Block Party in Orange on Saturday, Rep. Abigail Spanberger spoke to the Review about her admiration for John Lewis, the Georg…

About 50 people turned out for the event on a sultry Saturday.