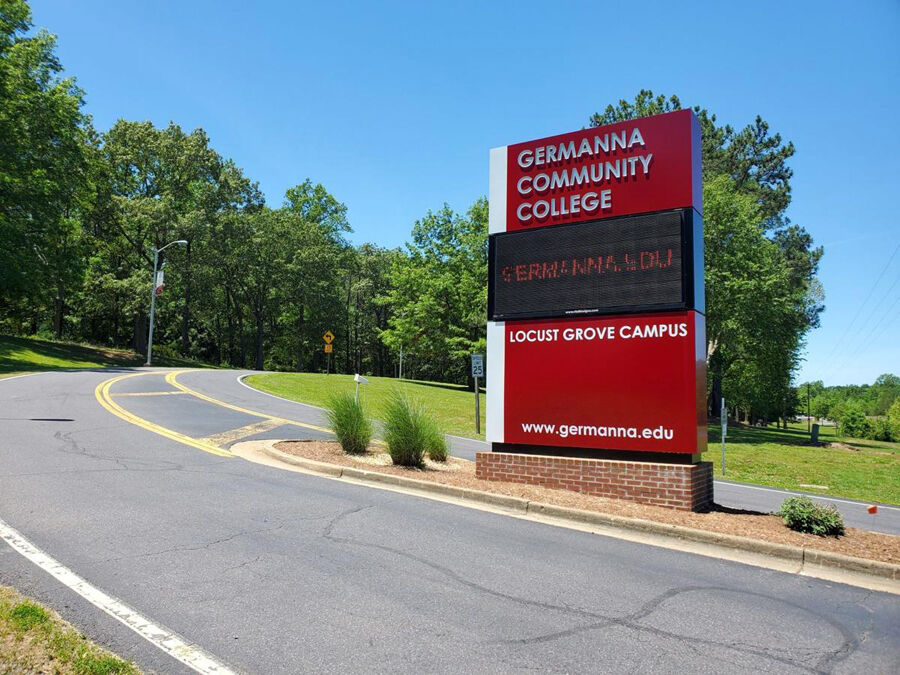 Germanna Community College is expected to break ground on a new state-of-the-art building at its Locust Grove campus in early 2022. The two-story building will replace the original structure constructed for the college’s opening in 1970.

Construction costs for state-of-the-art building are estimated to range from $31 million to $41 million and groundbreaking is expected in early 2022 with a completion date of Summer 2023. The two-story building will be 68,999 square feet and will include six classrooms, an emergency medical services lab, event space and other features. Additionally, the Turnage Health Sciences Building will house the O’Neill walk-in clinic which will offer some medical services to the public.

The new building will replace the campus’ sole facility, the French Slaughter Building, originally constructed in 1969. The project is part of an effort by GCC to designate its Locust Grove campus as the primary nursing and health campus for the college. Germanna’s other campuses are located in the city of Fredericksburg, Stafford County and Culpeper County. A workforce development center is based in Caroline County.

“Historically, Locust Grove has been the main campus,” said Dr. Janet Gullickson president of GCC. “And that came about because both Culpeper and Fredericksburg wanted to be the location of the flagship campus. The logic at the time was to put it somewhere in the middle and then the Germanna Foundation stepped up with their generous offer.”

The Germanna Foundation is a nonprofit organization dedicated to preserving the historic Fort Germanna site along the banks of the Rapidan River. The foundation’s visitor center and memorial garden are adjacent to the Locust Grove campus. In 1969 the foundation donated 100 acres of land to the Commonwealth of Virginia to create GCC.

Plans for the Turnage Health Sciences Building have been in development for years going back to Germanna’s last president, Dr. David A. Sam, who served in his role from 2007 to 2017. During his tenure Sam said that the Slaughter building was gradually falling into disrepair and became more trouble than it was worth.

“The roof was leaking and the sewers underneath the concrete were just tile and were breaking down,” Sam said. “It leaked energy like a sieve. So, we were having to spend a lot of money on HVAC repairs and that led us to a long-term plan for replacing the building. However, we weren’t sure that the state of Virginia would accept it. We kept sending them maintenance plans to rehabilitate the building instead. Finally, in 2013, administrators for the Virginia Community College system asked us to give them a master plan for the campus which included a new building.”

According to Sam, the state had strict requirements for the design of the building, in order for the concept to receive approval.

“First, we designated the Locust Grove campus as our healthcare campus and then we hired architects to come in and create a plan,” he said. “The plan had three goals: one, make it a campus; two, preserve and restore nature; three, preserve and restore the history of the land. After the architects gave us a plan that we liked, we submitted it and it was approved. Next, we had to get what’s called pre-planning money. That’s hundreds of thousands of dollars for engineering, landscaping and architecture.”

Sam and Germanna’s vice president of administration at the time, Rick Brehm, were in the process of requesting the necessary funds when he decided to retire. Brehm passed away from pancreatic cancer in 2016.

“As I was retiring, we put in a different proposal for state funding for the building and it was turned down. But we handed it off to Dr. Gullickson and she was able to get that done.”

Gullickson credits two state politicians with greasing the wheels to get the state to approve funding for GCC: State Sen. Emmett Hanger and Del. Terry Austin.

“Sen. Hanger has really been an advocate for Germanna in the past, so it made sense for him to support this project,” she said. “Del. Austin is a big fan of technical education and community colleges in general. He is also quite a leader in the house. We were just lucky to have two representatives at the state level who advocated for us so well.”

Supplementary funding for the Turnage Health Sciences Building has come from GCC’s broad donor base.

“There are a lot of private donors who have helped us,” Gullickson said. “For example, Mary Jane O’Neill from Fredericksburg has contributed so much to the college and toward the building. Also, the counties that we serve have stepped up to help. Hopefully, we will have enough money to build the facility. If not, then we are going to have to find some more. We might have to go back to the legislature or ask our private donors, but right now, we are pretty optimistic.”

Because of O’Neill’s longtime patronage and support of GCC, the new building’s clinic will be named for her late husband, Robert.

Pushing GCC in a bold, modern direction isn’t the only reason behind the Turnage Health Sciences Building, Gullickson explained. The college wants to position itself to be a major player in the healthcare industry in Central and Northern Virginia.

“The other thing that’s happening that has made this project even more urgent is the Department of Veterans Affairs is building an outpatient clinic in Spotsylvania County,” Gullickson said. “That will definitely increase demand for our healthcare professionals. We want to be ready to go for that. It’s likely that we will be finishing up our building around the same time they finish theirs.”

The Turnage Health Sciences Building is particularly meaningful for Sam because it is the culmination of the effort poured into the college during his tenure. He views the building as an unofficial tribute to his former colleague, Brehm.

“I’m equally excited about it because the Slaughter building was where Rick’s office was and he was instrumental in developing this master plan, so this will be a nice way to remember him,” Sam said. “Of course it’s named after Frank and Nancy Turnage, who are two fine people. Frank is someone else we all miss.”

Conceptual renderings of the building’s exterior and floor plans attached to the press release issued by GCC were created by RRMM Architects in Arlington.

“RRMM was thrilled to be selected for such a significant design project for not only Germanna Community College, but for the entire Virginia Community College System,” said Dan Hickock, director of the Special Projects Studio at RRMM. “The design is at its essence, compact and efficient, but yet internally organized to provide contemporary, technology-enhanced, collaborative learning spaces that can double as community spaces as well. The exterior design respects the micro-environment by providing views out to the beautiful woods surrounding the campus, and by expressing a welcoming entry plaza embraced by diagonally arranged columns evoking images of the area’s construction heritage.”

The project is still in the drawings and concept phase of development and Gullickson said some small tweaks could still be made to the layout and overall design. Neverthless, she said the timing couldn’t be more perfect since GCC has seen its enrollment gradually increase and is in need of extra space.

“Germanna, unlike any other community college in Virginia, has grown in the last three years each and every semester. There is another option for students who live in rural areas like Orange and that’s our virtual campus. So, we are building out our online offerings, in part because we don’t have a lot of room in our existing facilities.”

The Declaration of Independence, United States Constitution, Bill of Rights and the Thirteenth, Fourteenth and Fifteenth Amendments, also know…

Celebrating the Constitution Saturday at Montpelier

Celebrate the anniversary of the U.S. Constitution with family and friends on the historic grounds of James Madison’s Montpelier on Saturday, …

Germanna Community College is expected to break ground on a new state-of-the-art building at its Locust Grove campus in early 2022. The two-story building will replace the original structure constructed for the college’s opening in 1970.