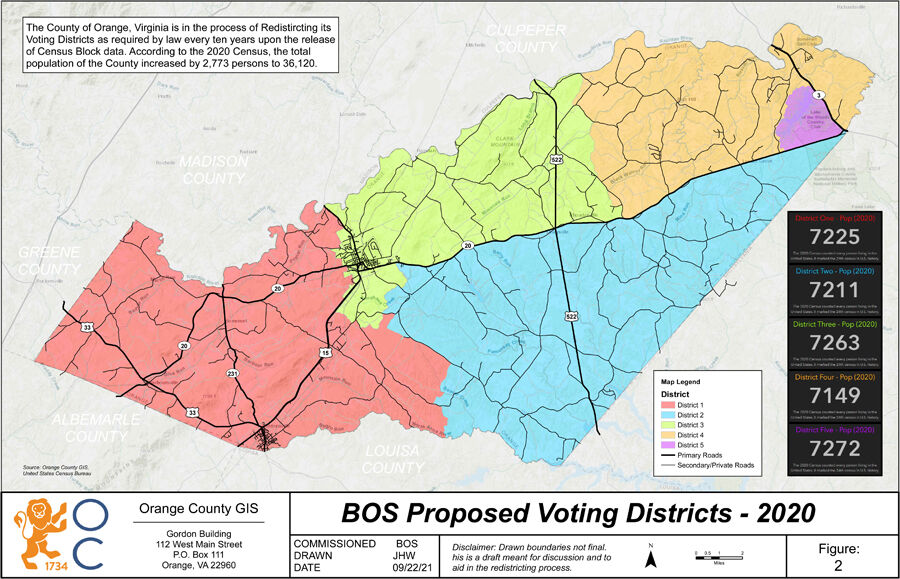 Pictured is the proposed Orange County redistricting map following the 2020 U.S. Census. Proposed population figures by district are noted in the box at the far right of the map. District 1 is illustrated in red, District 2 in blue, District 3 in green, District 4 in beige and District 5 in purple. 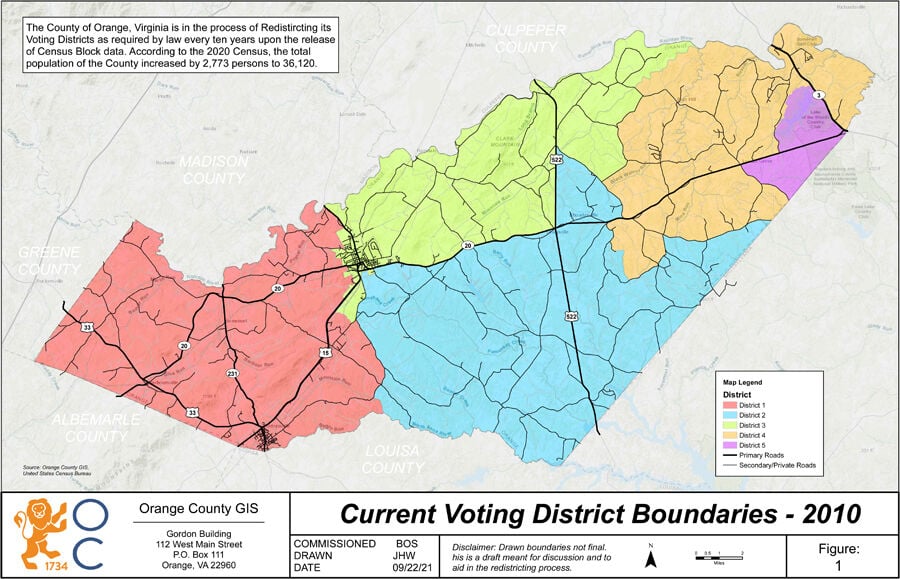 Pictured is the current district map based on the results of the 2010 U.S. Census.

Based on those figures, the county population increased by 2,773, with most of the growth concentrated in the eastern end of the county.

When the county last redistricted, following the 2010 U.S. Census, each of the five voting districts were comprised of an average of 6,670 individuals—ranging from a low of 6,602 in District 3, to a high of 6,862 in District 5.

With those figures, the redistricting map looked somewhat like a jigsaw puzzle, but District 2 and District 1 comprising the largest geographic tracts, followed by District 3 and District 4. District 5 was decidedly the smallest geographically, comprised mostly of Lake of the Woods and a small section of eastern Orange County south of Route 20 to the Spotsylvania County line.

Orange County Administrator Ted Voorhees said the county received census figures Aug. 27 and has been working to develop a redistricting plan that will meet a Dec. 31 deadline.

The Orange County Board of Supervisors got its first look at a proposed redistricting map during a Sept. 14 work session with county staff, including county GIS analyst Jim Whipp and county registrar Donna Harpold and members of the Orange County Electoral Board.

In presenting the data, Whipp noted how GIS capabilities allow the board to drill the data down to census block level and adjust the map accordingly to even out each district’s population.

“This is a good tool to look at the individual census blocks and allows us to play with the [district] boundaries to get these numbers close to the 7,200 sweet spot,” Whipp said.

The tentative map presented to the board at the Sept. 14 work session is fairly straight forward with cleaner lines than the current iteration (see graphics).

The proposed maps and a timeline of the redistricting process have been posted to the county website at www.orangecountyva.gov.

Tuesday afternoon, after presstime, the board held another work session to present a working map, set proposed polling places and schedule a public hearing, likely for the Oct. 26 board meeting.

Supervisors and county staff noted that the proposed redistricting plan would not affect the Nov. 2 election. Any redistricting changes would not take effect until 2022.

As it stands, the county is under a tight time frame to develop its map, solicit public input and submit it for approval by the Dec. 31 deadline. In years past, census data was received in the spring and the redistricting process began (and finished) much sooner. With the late arrival of this year’s figures, the county has a much smaller window to accomplish the task.

Lacheney noted the board had two options for submitting its plan for approval—the most efficient of which is to submit an approved plan to the Virginia Attorney General’s office by Oct. 31. The attorney general’s office has 60 days to review the plan (which would allow the county to meet the Dec. 31 deadline). The other process is to advertise the proposed map for 45 days, open a 30-day comment period and, if any substantial changes are made, to conduct another 30-day comment period before submitting the plan for approval.

While Lacheney noted the first option was more expeditious, supervisors expressed some concerns about conducting a redistricting public hearing days before a general election—even though it would have no impact on this year’s election.

A number of local seats are on the Nov. 2 ballot, including District 1, 3 and 4 Supervisor and District 1 and 4 School Board. Statewide seats include the 30th District Delegate, governor, lieutenant governor and attorney general.

“I’m a little nervous having this much discussion two weeks prior to the election,” District 2 Supervisor Jim White said.

“We just need to continue to mention this does not apply to this year’s election,” District 5 Supervisor Lee Frame said.

District 1 Supervisor Mark Johnson said the board didn’t have many options otherwise.

“We don’t,” Voorhees confirmed. “We’re up against it with the delay in the census information.

The board is inviting public comment at its Oct. 12 regular board meeting, as well as at the Oct. 26 (presumed) public hearing. Additionally, a citizen comment form is on the redistricting page on the county website at www.orangecountyva.gov/963/Local-Redistricting-in-Orange-County.

Pictured is the proposed Orange County redistricting map following the 2020 U.S. Census. Proposed population figures by district are noted in the box at the far right of the map. District 1 is illustrated in red, District 2 in blue, District 3 in green, District 4 in beige and District 5 in purple.

Pictured is the current district map based on the results of the 2010 U.S. Census.