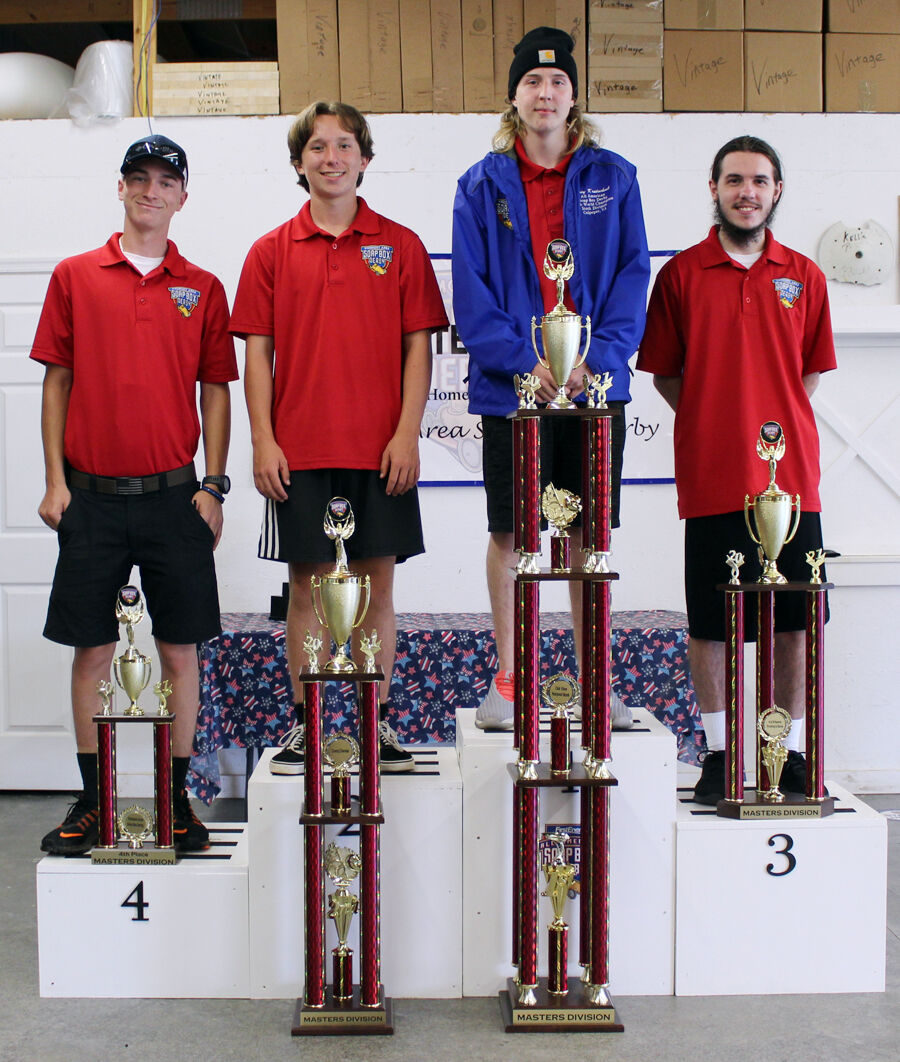 Joey Kratochvil, second from right, won the masters division at the Piedmont Area Soap Box Derby to qualify for the world championship in Akron. 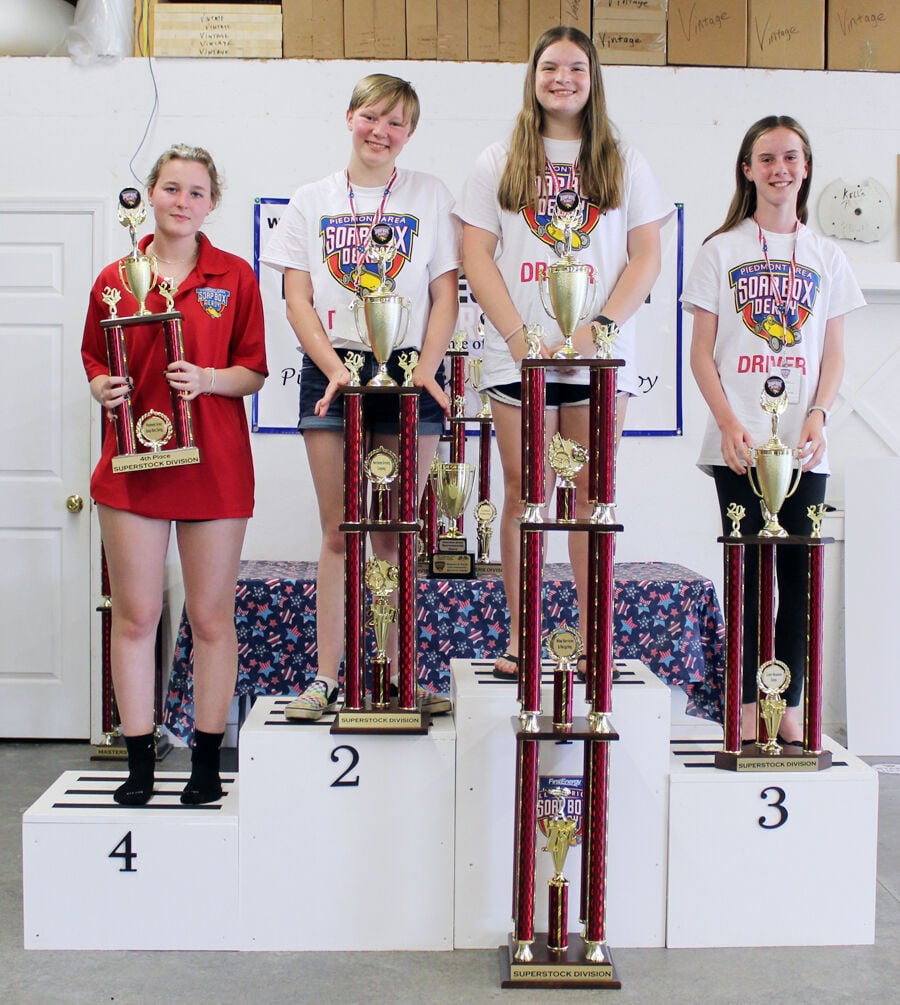 Kayla Crawford, second from right, won the superstock division at the Piedmont Area Soap Box Derby to qualify for the world championship in Akron.

Friends and families returned to Paul Bates Raceway in Culpeper on June 12 for derby day following a year hiatus. Children ages 7 to 20 compete at the derby in their non-motorized cars to see who can outrun the competition using only gravity, grit and determination. The races are broken up into divisions based on the type of car used: stock, superstock and masters.

“With the cars they have kits you purchase that you can use to build them,” said Sheila Rutherford, race director for the Piedmont Area Soap Box Derby. “We have a couple of children whose families own their cars, but the vast majority are cars that have been purchased over the years by businesses in the community. They allow us to assign the car to a driver for the event. Tucker, our stock driver, his car is owned by Piedmont Pediatrics, Kayla Crawford’s car is owned by Chick-fil-A at Culpeper Colonnade and Joey Kratochvil’s car is owned by Eppard Orthodontics in Culpeper.”

Kratochvil has raced in all three divisions but is now competing solely in masters. Crawford is competing in superstock where she began racing originally.

A soap box derby racer since age 7, Kratochvil has had plenty of success on the track over the last several years, winning locally in the stock division in 2016 and going to Akron that year.

“When he finished racing, because he won the world championships, his car is actually hanging in the hall of fame in Akron,” Rutherford explained.

He also appeared on the morning talk show Live with Kelly where he raced against host Kelly Ripa, winning handily. Kratochvil described what it’s like to operate a masters car and his racing strategy.

“The masters car has a weird steering wheel that is straight up and down,” he said. “I’m really squished when I’m in the car. It’s like you are in a coffin. That’s the only I can think of to explain it. I can see down the front of my car and just barely see the tops of the front wheels. Of course, I can see far down the track in front of me. I let my car get on the track where it wants to go and then just correct it if it needs to be corrected.”

As far as preparing for the world championships this year, Kratochvil said he takes a hands-off approach.

“Honestly, I don’t even do anything as far as training,” he said. “We just get the cars loaded up on the trailer and take them to Akron. Once we get there, we work on the cars until race day. That’s it.”

Kratochvil, who graduated from a high school homeschooling program this spring, emphasized that what makes the world championships so tough is that racers only get one shot.

“In Ohio, when you race, it’s single elimination,” he said. “During the competition, you only go down the track once and most of the time it’s against two other people. So, there’s three people racing at a time. And if you lose that race, then you’re out.”

“A lot of stuff in [Akron] has changed,” he added. “I think it will be fun to race again since they just repaved the track.”

According to Rutherford, children can begin in whatever division they choose, yet once they become a local champion they can no longer race in that division and must switch if they want to continue.

“For example, when Joey became the local stock champion, he had to move on to superstock after that,” she said. “He stayed in superstock for a few years before switching to masters in 2019. When Kayla started racing, she was tall enough and old enough that we put her in a superstock car. She had a neighbor who was a longtime volunteer with us. His own children participated in soap box derby and he got Kayla interested in the sport.”

Crawford began racing at 12 and is optimistic about her chances at the world championships. This will be her first time participating in the event.

“I try and get into a good mindset and focus as much as possible in order to prepare,” Crawford said. “Just keeping a positive mentality that no matter what, win or lose, I’m going have fun with the people around me. I’m both really excited and really nervous because I’ve never been there before. Although I’m more excited than anything else. I can’t wait.”

She added that she is interested in trying out masters next year if she stays involved in the soap box derby.

“I don’t know,” she said. “It would depend, I guess on my mom, because she’s super scared for me to get in the masters car. But I am willing to try it. I want to know what it’s like. The only way I’m going to find out is if I go for it.”

Crawford said she is racing for a special reason; her father passed away around the time of the 2019 local June derby. Her sponsor, Chick-fil-A, let her add the words “Racing for Daddy” to the front of her superstock car.

“My dad was my biggest cheerleader,” she said. “He was always pushing me to do better so that I could eventually go to Akron. He encouraged me to not give up when times were hard.”

Rutherford said that soap box derby cars might look small, but that they can reach some impressive speeds on a big enough hill.

“The cars are usually going somewhere between 30 to 35 miles per hour down the track,” she said. “It is not a slow roll. But with all children, safety is a paramount concern. Any child who races at Paul Bates Raceway must earn their ‘driver’s license.’ They have to come over and show us that they can control the car and that they’re enjoying it. So, they earn a driver’s license and we issue them a picture ID. It’s a fun little thing.”

One of the benefits that kids can get from participating in the soap box derby is gaining a better grasp on math and physics.

“Not only does the child get to race but they are able to work on the car and they can apply what they’ve learned in geometry about triangulation,” Rutherford said. “They have to check to see if the car is balanced and make sure the steering is set up straight. On top of all that they run cabling and look at how the weight on the vehicle is distributed. Because there are different areas in the car that you can place weight. That can change how you come out of the rails.”

Although, Rutherford will not be able to go to Akron this year with the racers, she is happy with the leadership group that will be attending.

“Our rally director, Troy Frazier, is going to go up and assist the families and be there,” she said. “Paul Bates Raceway is named after a longtime volunteer who was instrumental in building the track when we moved from Blue Ridge Avenue, right by a local park in Culpeper. We outgrew that location and we were able to lease land from the county. They modeled the track off of the hill where ‘Worlds’ is held. Families and children often come from other areas to race at our track, in order to get that experience before they ever go to Ohio. Mr. Bates was heavily involved in building the racetrack and he will be at Akron on July 24 as well.”

To learn more about the Piedmont Area Soap Box Derby and the World Championships in Akron, visit www.soapboxderby.org.

A small, campaign-style yard sign sits outside a home on Route 33 west of Barboursville promoting the high-speed broadband FiberLync service.

Orange Downtown Alliance, Inc. (Love Orange Virginia) has been accredited as a Main Street program for meeting standards of performance in 2020.

Joey Kratochvil, second from right, won the masters division at the Piedmont Area Soap Box Derby to qualify for the world championship in Akron.

Kayla Crawford, second from right, won the superstock division at the Piedmont Area Soap Box Derby to qualify for the world championship in Akron.