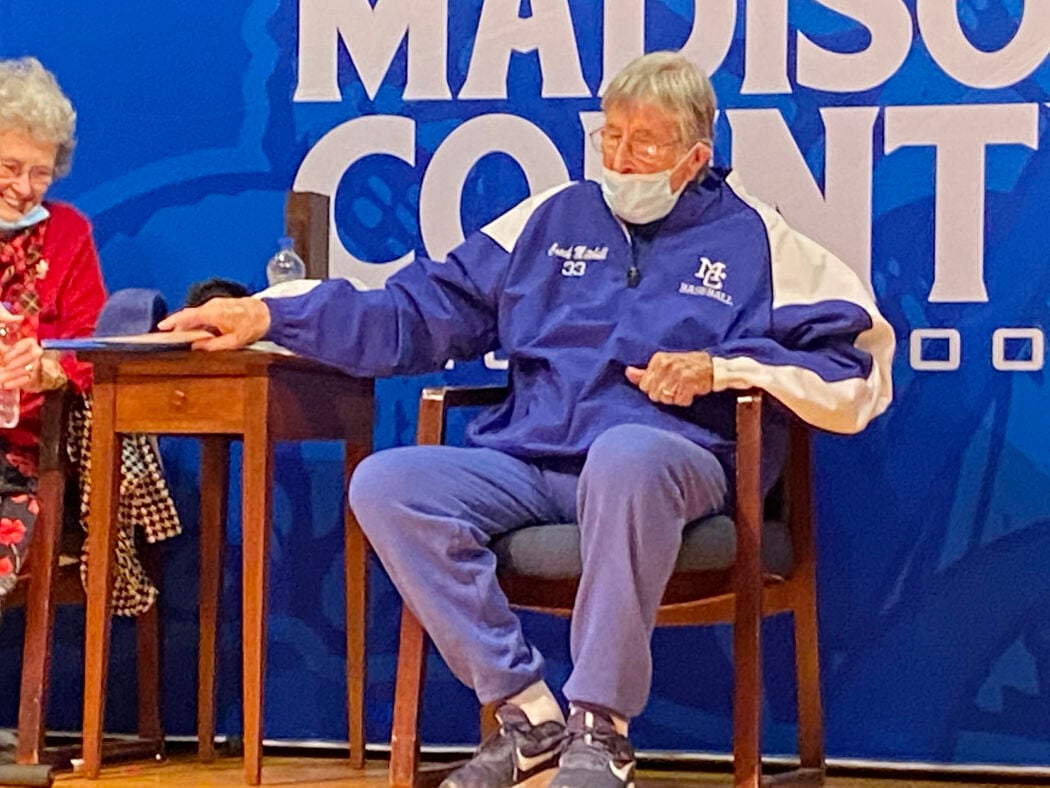 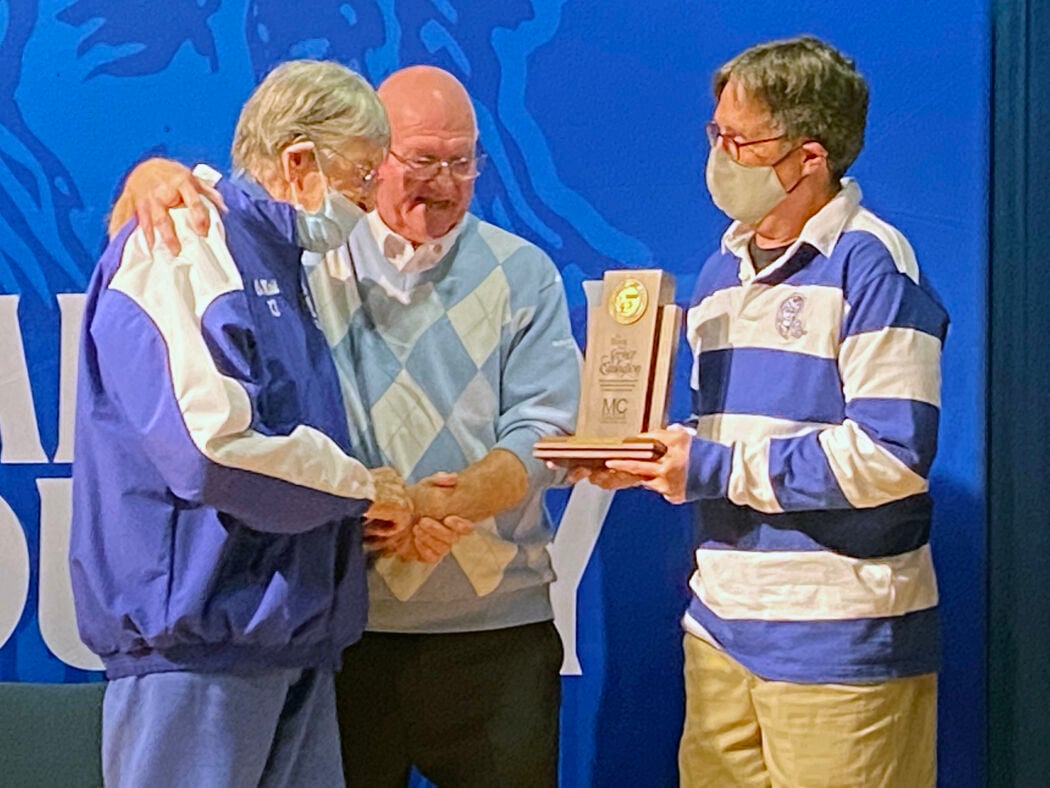 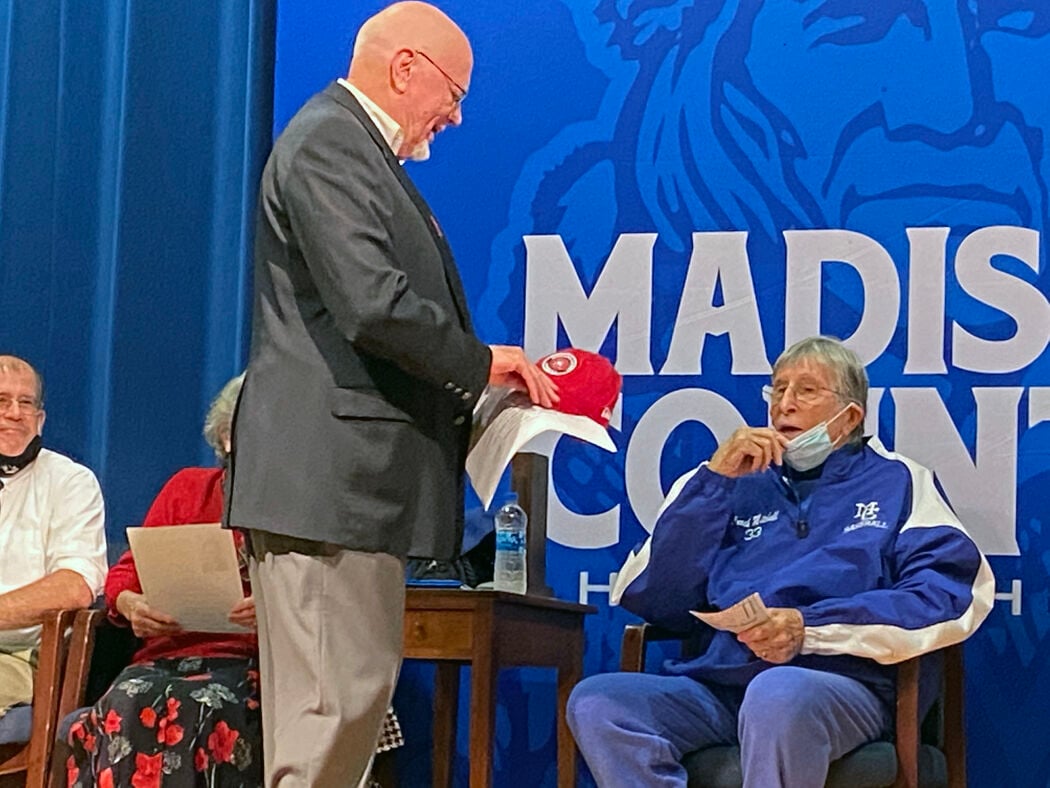 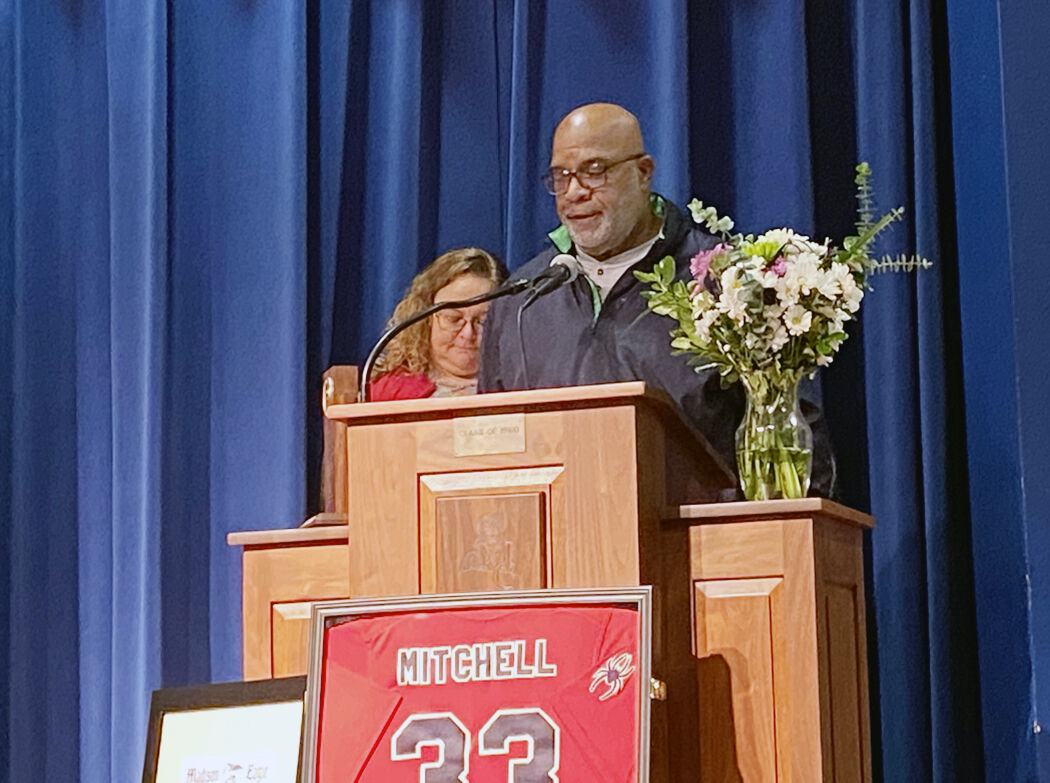 Arthur Greene, Sr. leads a prayer at the school board program dedicating the MCHS baseball field in honor of Billy Mitchell. 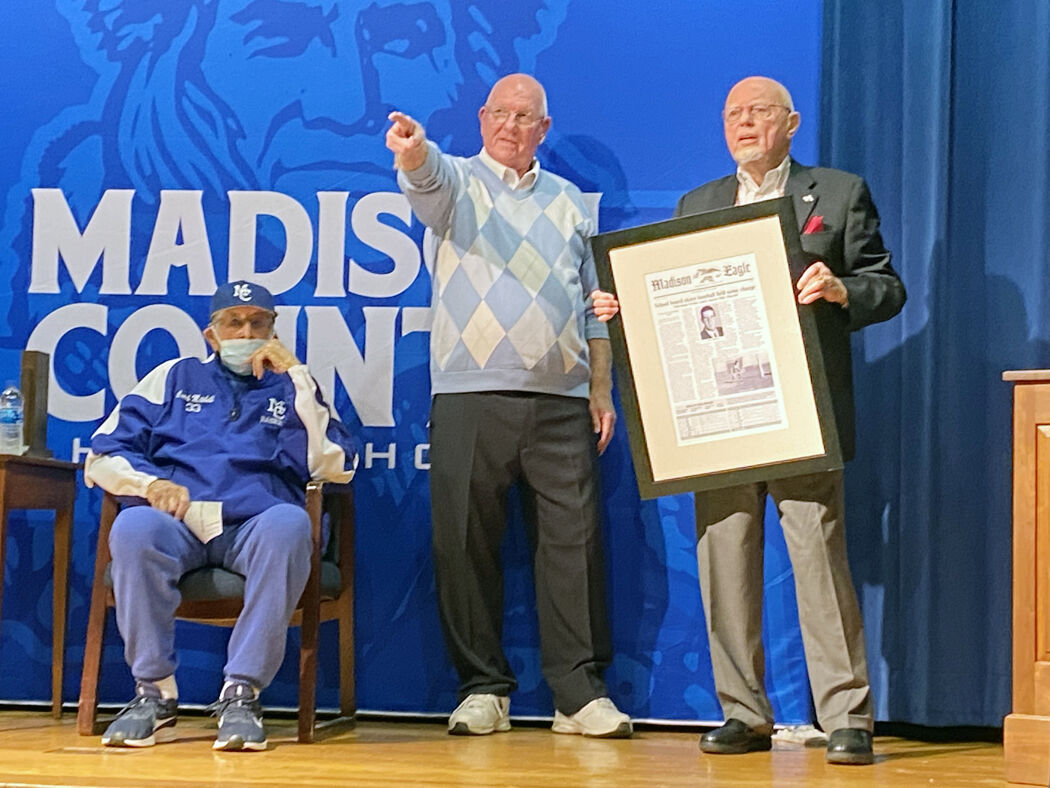 Billy Mitchell, Red Jenkins and Joe Daniel hold up a copy of the Madison Eagle article about renaming the baseball field in Mitchell's honor

The Madison County School Board approved the renaming last October after four community members wrote letters to the board expressing their desire to honor the retired coach and educator. Red Jenkins, Daryl Dodson, Rea Brown and Arthur Greene Sr. all wrote letters recommending the school board rename the field after Mitchell, who dedicated 36 years to MCHS. The board unanimously supported the measure.

Friends, colleagues and community members spoke of the vast contributions Mitchell has made to the community over the past 70 years.

Born in Madison County, Mitchell first made a name for himself as a star athlete at Madison County High School playing both basketball and baseball. Mitchell’s pitching prowess got him recruited by the University of Richmond where he played before going into the U.S. Army. Mitchell went on to play professionally, pitching for the Durham Bulls, Augusta Tigers, Birmingham Barons and Charleston Senators. When Mitchell’s pro baseball career ended he went back to the University of Richmond and, following graduation, returned home to Madison County to teach high school math. Mitchell worked in the Madison County School system from 1959 to 1995 as a teacher, coach and principal.

Jenkins, one of the first to promote the idea of renaming the field, spoke to the large audience in attendance last week about the positive impact Mitchell had on his students. He recalled how Mitchell always encouraged his students to do their best whether in the classroom or on the ballfield.

“He always told us, ‘Anything you do, do the best you can do,’ ”Jenkins recalled, before he presented Mitchell with a commemorative plaque. “He shared his passion and taught us how to be a good winner and how to shine your shoes. It was always important that we were prepared when we went on the field.”

Several community members also spoke about the influence Mitchell had on their lives.

Don Daniels recalled how Mitchell was a successful coach but, more importantly, a gifted teacher and mentor to both students and younger faculty.

“Billy has made a life of contributions to this school system and the community,” said Daniels. “He wasn’t just a coach, he was an educator. A lot of students finally figured out math in his classroom.”

Becky Gore emphasized how Mitchell encouraged her both on the field and in the classroom.

“Mr. Mitchell was a man before his time,” said Gore. “He supported our sports but more importantly he encouraged us in class. He liked smart girls and pushed us to participate and work hard in class, something that was not common back then. It made us feel welcome.”

Following the guests’ remarks, Mitchell took the microphone and, with his characteristic humor, said he would follow his mantra: “Be honest. Be brief. Be seated.” He thanked the audience for the honor and reminisced with them about his time in the school as a student, athlete, coach and teacher.

The ceremony closed with Jenkins leading a sing-a-long to Jack Norworth’s baseball anthem, “Take Me Out to the Ball Game.”

We the People: Orange, Museum break ground for Charters of Freedom

Arthur Greene, Sr. leads a prayer at the school board program dedicating the MCHS baseball field in honor of Billy Mitchell.

Billy Mitchell, Red Jenkins and Joe Daniel hold up a copy of the Madison Eagle article about renaming the baseball field in Mitchell's honor