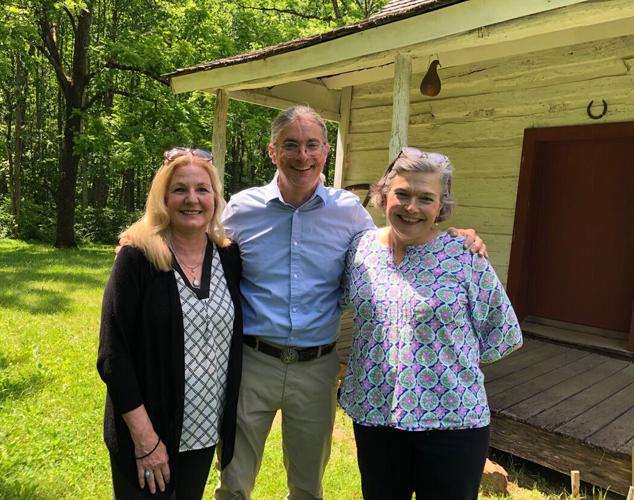 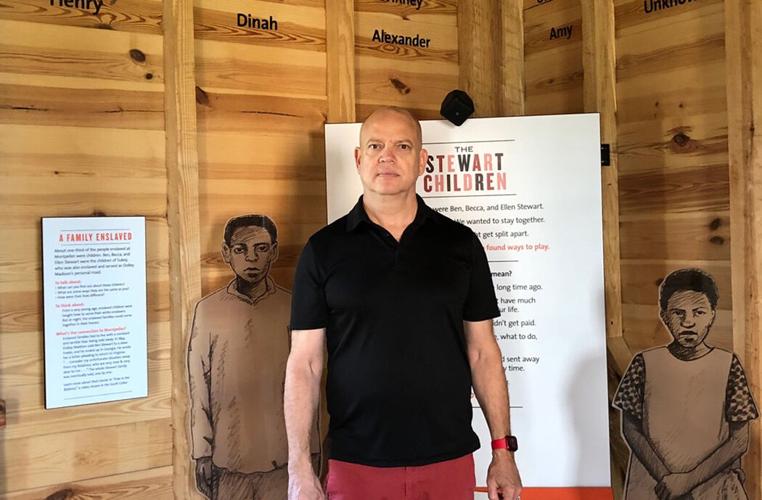 Wednesday, the Montpelier Foundation Board of Directors announced the election of James French as chair. French, a banking and technology executive whose ancestral home is near Montpelier, commences his second term on the foundation board. He is pictured here among the recreated South Yard slave cabins on the grounds of Montpelier.

One of Chew’s first acts was to rehire Director of Archaeology and Landscape Restoration Dr. Matthew Reeves and Director of Communications Christy Moriarty, who were fired the same day she was. Reeves and Moriarty were back on the job Tuesday.

This whirlwind sequence of events follows the recent addition to the foundation’s board of 11 prominent scholars, writers, ministers and other professionals, all recommended by the MDC. In welcoming these individuals to its ranks, the board achieved its goal of structural parity—co-equal sharing of power—with representatives of the MDC, a group that includes the descendants of African Americans enslaved by the Madison family or by owners of nearby plantations.

Chew said she is committed to telling the “whole-truth history” of Montpelier. “I’m honored by the trust that the board has placed in me, and I’m very much committed to the next chapter at Montpelier with structural parity between the MDC and the Montpelier Foundation Board.”

Last Monday, the newly constituted board met for the first time and elected James French as its new chair. French’s selection is another surprising twist in the Montpelier saga. Previously chair of the MDC as well as a Montpelier board member, the Barboursville resident clashed repeatedly over matters related to structural parity and race relations with former board chair Gene Hickok of Richmond and Roy F. Young II, who resigned last week as Montpelier’s president and CEO. Chew said it was French who called to offer her the top job on an interim basis.

In a press release, French said of Chew: “Elizabeth has the full confidence of Montpelier’s dedicated staff. Her reputation for visionary leadership is recognized nationally. Her willingness to take the helm during this critical period will do much to help us turn the page to Montpelier’s next and best chapter.”

Starting in late March, when news broke that Montpelier’s board was rescinding its promise to allow the MDC the sole authority to nominate representatives of the descendants community, French and the board sparred in press releases and interviews, with the board largely on the losing end of the public relations battle. Numerous organizations representing museums, historians and archaeologists condemned the board for backing away from what many had perceived last June, when the board announced its goal of structural parity, as genuine progress in race relations. The National Trust for Historic Preservation, which owns Montpelier, sided with the MDC and told the board to choose nine new members from a list of highly qualified individuals that the MDC had shared with the public via a virtual press conference.

The National Trust’s strong words, plus the angry response from many donors who withdrew their support, had an impact. Hickok rotated off the board in May, and the press release announcing Chew’s appointment and Young’s resignation also noted that French is stepping down from his leadership position with the MDC now that he’s in charge of the Montpelier board.

As for the MDC’s increased representation on the board, the 11 new members whom the board chose from the MDC’s list of candidates include Dr. Daina Ramey Berry, chair of the history department at The University of Texas at Austin; F. Michael Higginbotham, a law professor at the University of Baltimore; Soledad O’Brien, a broadcast journalist and producer; and Dr. Nicole Thorne Jenkins, dean of the McIntire School of Commerce, and Ian H. Solomon, dean of the Frank Batten School of Leadership and Public Policy, both at the University of Virginia.

The board now has 21 members with a capacity for 25, according to Krista Costello, Montpelier’s director of annual giving and advancement services. Previously, the board had 16 members.

In addition to French, the board’s new officers are co-vice chairs Stephanie Meeks, former CEO and president of the National Trust, and Dr. Hasan Kwame Jeffries, a civil rights scholar and historian at The Ohio State University; secretary Dr. Joshua D. Rothman, chair of the history department at the University of Alabama; and treasurer Peter McHugh, a retired travel industry executive, who previously served as a vice chair.

Driving force behind “The Mere Distinction of Colour”

A native of Augusta, Ga., Chew, 58, holds degrees in art history from Yale University (B.A.), the University of London (M.A.), and the University of North Carolina at Chapel Hill (Ph.D.). Early in her career, she worked for the Smithsonian American Art Museum, the National Gallery of Art and The Phillips Collection. More recently, she worked at Monticello for 13 years, first as an associate curator of collections and then as curator. She was director of the curatorial and education division at Reynolda House Museum of American Art in Winston-Salem, N.C., before being named Montpelier’s executive vice president and chief curator in 2015.

Chew was the driving force behind Montpelier’s award-winning “The Mere Distinction of Colour” exhibition on enslaved people, which is housed in the mansion’s lower level. She also is the author of numerous scholarly articles and book chapters and has served as an adjunct instructor of art history at several universities, including the University of Virginia and James Madison University.

Merry Foresta, a retired curator and administrator at the Smithsonian who now works as an independent curator and consultant for the arts, has known Chew throughout her career. She supervised Chew as an intern and then hired her as a project assistant for several exhibitions. The two have stayed in touch.

Of Chew, Foresta commented via email, “Elizabeth is that almost unique balance of academic knowledge and common-sense administrative know-how. To that, she adds a vision for how best to preserve the collections she oversees, the history they represent, and the needs of the audience she serves.”

Furthermore, Foresta said, “At Monticello and then at Montpelier, she was inspired by the task of revealing the difficult historic truth of these plantations—not as an indictment but as a revelation of the power such truth can yield. She has a unique ability to work with people, about people. She is a convener.”

Asked to comment on the challenges Chew faces in her new role, Foresta said, “To start, she has the double-headed task of refocusing the board and the Montpelier staff. She has new board members to meet and a new board hierarchy to engage, and she has a staff that has been roiled by the last months and needs to be supported and re-inspired. With that, she continually needs to find new ways, new voices, new narratives to build on the discussion of slavery and the founding of the United States.”

Chew, a Charlottesville resident, said everything she took home from her office in April was still boxed up—a matter of “inertia” rather than premonition. “I didn’t know this would happen,” she said of her rehiring and promotion. “I hoped it would happen.”

After weeks of tumult, her hope has become reality, and Chew is busy unpacking—and planning the next chapter at the estate whose history she has pledged to share as fully and accurately as she can.

Wednesday, the Montpelier Foundation Board of Directors announced the election of James French as chair. French, a banking and technology executive whose ancestral home is near Montpelier, commences his second term on the foundation board. He is pictured here among the recreated South Yard slave cabins on the grounds of Montpelier.