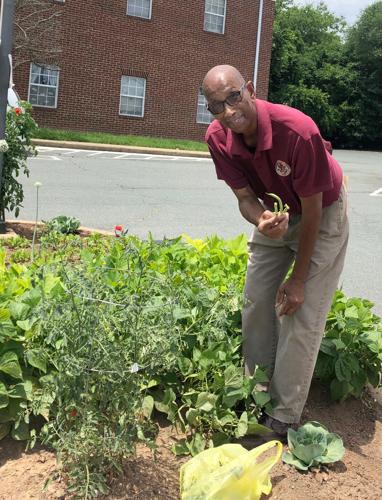 Lewis Davis tending the gardens outside the Sedwick Building. 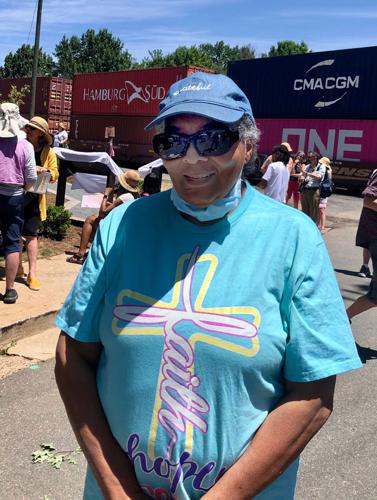 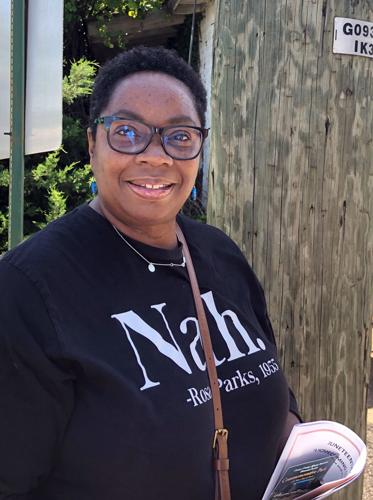 Some people look at an untended spot and see nothing worth changing. But Lewis Davis, a custodian who cleans the county offices in the Sedwick Building on Madison Road, is not in that category. When Davis looked at the two little islands of weedy dirt surrounding the electric light poles in the county parking lot, he saw the potential for growing tomatoes, squash and lots of other vegetables. With permission from his supervisor, Davis got to work three years ago on his own time, on weekends.

Like an artist prepping a canvas, he dug up weeds and amended the soil with compost before planting his crops. “It took me a while to get it straightened out,” he told me on Friday during his lunch break, in the midst of picking string beans.

This year, the two gardens at either end of the parking lot are yielding tomatoes, cabbage, yellow squash, onions, kale, collard and cucumbers, as well as string beans, thanks to his diligent weeding and watering. He said he’s had better luck gardening at work than at home, where he “got tired of feeding the critters,” especially the ever-nibbling deer.

A 14-year county employee at the Sedwick Building, the Orange County native told me with a smile that he loves working there. As for the gardens and their bounty, which he shares with his coworkers, he said, “It’s been a blessing.”

Do you remember the Orange County High School track before it was replaced? The hard surface was not very forgiving. I jogged there occasionally, but my knees told me not to make a habit of it. The springy new track, completed a few years ago under the capable direction of Doug Arnold, project specialist for Orange County Public Schools (OCPS), has made a world of difference. The synthetic surface still looks brand new, and it’s energizing rather than enervating to walk, jog or run on it.

Thanks, Doug, for making sure the long-awaited and much-needed track and field project turned out so well.

Speaking of OCPS, Director of Human Resources Yvonne Dawson must be having quite a hectic summer, given that the schools currently have 90 job openings, many in teaching. I attended school board meetings well before the pandemic when Dawson warned the school board about the state and national teacher shortage that was looming—and then underway. Combined with the pandemic, the recent politicization of the school board has made it even harder for the county to recruit and retain teachers. In May, the board passed a “divisive content” resolution stifling classroom discussion of race-related topics, and it tabled for later consideration a proposed “sexually explicit materials” measure that would require (among other things) the schools to out self-identifying LGBTQ students to their parents. Since the day of that board meeting, the number of teaching and non-teaching job postings has continued to rise.

To give you an idea of how dire the shortage is, here are high school teaching jobs that OCPS needs to fill by Aug. 10, the first day of school: agriculture, alternative education, biology, cybersecurity, English, history, math, physics, reading, social studies, Spanish, special education and technology education.

On June 19, President Bruce Monroe and Vice President Zann Nelson of the Orange County African American Historical Society, Orange Mayor Martha Roby and Rep. Abigail Spanberger were among the speakers at the dedication of the new park at the corner of Church and Chapman streets. Combined with a celebration of Juneteenth, the event was warmhearted and collaborative. I especially enjoyed the drum circle led by Darrell Rose, a tremendous musician and artist. The children and teenagers who joined him and other experienced musicians, including Dr. Dena Jennings and Judy Peterson, looked like they were having the time of their lives.

Oleatha Braxton, a singer who has performed at numerous public events around Orange County, was standing near me in the crowd of spectators. “Great drummers!” the lifelong Orange resident exclaimed when I asked for her opinion. “They’re doing a wonderful job. I’m really enjoying it.”

After the park dedication ceremony, I chatted with Shelley Long, also of Orange, who told me she hopes the new park will help revive the once-thriving Black neighborhood. As for Juneteenth, the federal holiday marking the day in 1865 when enslaved people in Texas belatedly found out they were free, Long said, “It makes people pay more attention to history. It’s educating us all over again.”

Until next time. Send your tips and quips to me at hwholladay@gmail.com.

Lewis Davis tending the gardens outside the Sedwick Building.