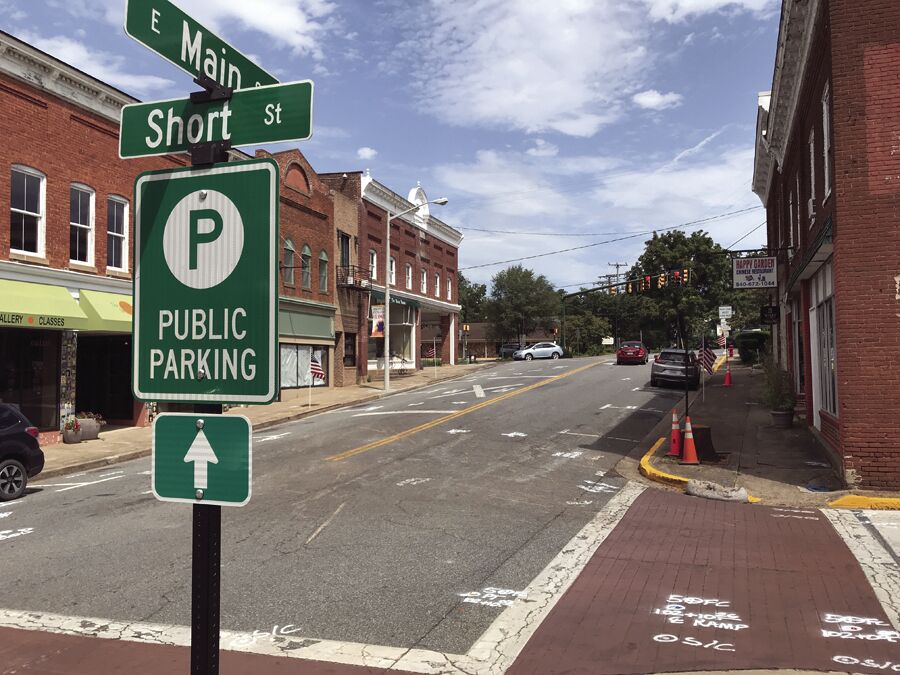 Spray paint on the block of Main Street between Byrd and Short streets illustrates the pending progress of Main Street improvements in downtown Orange. After three attempts, the town has a qualified bidder to add streetlights and repair sidewalks and signals from Byrd Street to the railroad tracks.

Pictured is a rendering of the Orange Main Street sidewalk renovation project depicting the north side of Main Street from the May-Fray intersection to the railroad tracks.

A brief walk between Short Street and Byrd Street provides evidence that improvements are in the offing.

According to Orange Director of Community Development John Cooley, the latest phase of the town’s downtown redevelopment starts with the segment of Main Street between the railroad tracks and Byrd Street.

In a Virginia Department of Transportation enhancement grant that dates to the late 1990s, the town expects to complete the latest downtown improvement project by early 2021.

The town had hoped to proceed on the project more than a year ago, but problems with contractors and bids caused the delay.

At last, the town has a viable contractor to complete the project that is paid for on an 80/20 split, with the town responsible for one-fifth of project costs.

The project will improve the streetscape and sidewalks between the railroad tracks and Byrd Street in what Cooley hopes is the first phase of a complete Main Street renovation.

In the coming months, contractors will dig up existing sidewalks and curbs within the block to begin replacing them with new sidewalks, concrete scoring, planting areas, street lights and reconfigured parking spaces.

Additionally, Cooley said, the town is coordinating signaling with Norfolk-Southern to align traffic signals at the Byrd Street-Main Street intersection with the Main Street railroad crossing to alleviate traffic back-ups at that intersection.

If the train is crossing Main Street, the left-hand turn signal from Byrd Street to Main Street will remain “red,” Cooley noted. Also, as part of the project, Cooley said construction will allow the town to create uniformity with lane widths, which vary because of sidewalk and street widths.

The changes will be most notable on the north side of Main Street, he said.

While the project will eliminate several existing parking spaces in the block between the railroad tracks and the Byrd Street-May-Fray intersection, Cooley noted ample public parking is available at the train station, the municipal lot near Mario’s Pizza and, with a recent agreement with the Sedwick family, in the lot from Main Street to the former Sears building (Stafford Systems) behind UVA Community Credit Union.

While Main Street may lose a couple spaces, Cooley noted the new ones will meet modern standards.

Additionally, he said the sharp turn from May-Fray to Main Street will be mitigated to allow improved traffic flow, particularly for larger vehicles.

Also, as part of the project, the town will add streetlights along Byrd Street from the Church Street intersection to Main Street, completing the 2016 Byrd Street project.

Cooley said he hopes citizens and businesses will be so pleased with the improvements they’ll push for the rest of Main Street to follow suit.

“Once they see how nice this is, I hope they’ll clamor for getting the next section done,” he said. “Then, we can get some momentum, and with the town council behind it, maybe we can find a way to come up with the funds to finish Main Street.”

Cooley said building new, ADA-compliant sidewalks on Main Street is not only a safety project, but also a beautification one.

As part of the contract, Main Street businesses will be afforded access to Main Street during construction to facilitate commerce and foot traffic, he said.

“I’m really excited about the Main Street project,” he said.

“This is the beginning of making things safer and more attractive downtown,” she said. “People enjoy walking downtown—whether they are local residents or visitors and we want them to stop, look at the businesses and go in and support them.”

Roby said the town council has made a commitment to creating a more pedestrian-friendly, walkable town.

“This is a good beginning. There are many sidewalks that we need to repair,” she said. “We want safe sidewalks and this is a good design with colors and stamped concrete. Ultimately, it will improve safety.”

Roby said the project is designed to minimally impact businesses in the short-term while yielding a long-term benefit.

“We don’t want to interfere with business. These folks are just getting back on their feet. We want to enhance their business; they’ve been through enough already,” she said.

Since the town applies for VDOT funding in two-year cycles, she admitted progress may come slowly, but like Cooley, hopes citizens will support the improvements and push for further improvements up the street.

“We want the town to be a walking town and this is one way we can do that and it makes us American Disabilities Act-compliant,” she said.

Meanwhile, Cooley said he’s also excited about progress on the longstanding North Street project that finally will connect 400 feet of roadway behind Dogwood Village, near the Oakbrook Terrace Apartments.

The town took possession of the parcel in 2014 as a part of a 2011 proffer with Cannon Properties, but legal wrangling delayed construction until last month.

Among other town planning and development projects, Cooley noted that progress is being made on the new Dunkin’ location near the Wells Fargo branch in the Orange Village Shopping Center. While he did not have an estimated completion date, he noted the Dunkin’ location, subdivided in 1995, will be a free-standing location with inside seating (as available) and a drive-through.

In May, Daisy Marquina was finishing up the semester at San Jose State University. The 21-year-old former Unionville resident was studying for…

As part of its Coronavirus Aid, Relief, and Economic Security (CARES) Act funding, Orange County has announced a new program through the depar…

A Barboursville man was killed late Sunday evening in a single-vehicle crash on Route 33 in Orange County.

The controversial special use permit that would allow for the construction, testing and display of fireworks on property zoned agricultural he…

With a 3-1 vote, the Orange County Planning Commission voted Thursday evening to recommend denial of a special use permit for the Mid-Atlantic…

Spray paint on the block of Main Street between Byrd and Short streets illustrates the pending progress of Main Street improvements in downtown Orange. After three attempts, the town has a qualified bidder to add streetlights and repair sidewalks and signals from Byrd Street to the railroad tracks.

Pictured is a rendering of the Orange Main Street sidewalk renovation project depicting the north side of Main Street from the May-Fray intersection to the railroad tracks.