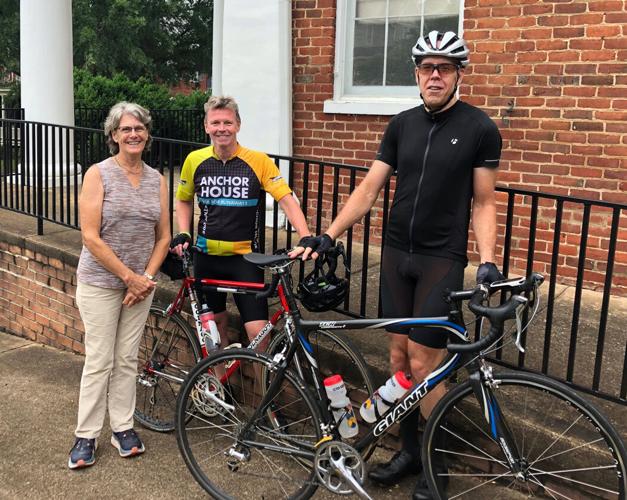 Laura Carlson, co-chair of the Anchor House ride committee, explains how the computer on her bike provides directions and data, including her speed and heart rate.

Cyclists pose with support team members who provide refreshments and fix bikes in need of repairs. Organizers said 77 cyclists were expected to stop briefly at Orange Presbyterian Church before continuing on to Culpeper on the first day of their seven-day bike ride and fundraiser.

If you happened to see dozens of cyclists making their way into Orange on Sunday morning, they were peddling for a good cause—Anchor House, a nonprofit shelter for at-risk youth in Trenton, N.J.

Anchor House sponsors an annual seven-day, 500-mile bike ride to raise funds for the shelter and its related programs that help more than a thousand children and young adults every year. The group chooses a different starting point for the ride each summer, and this year, 77 very fit and enthusiastic cyclists began their trek in Charlottesville. On the ride’s first day, the group had scheduled a pit stop at Orange Presbyterian Church, where fourth-generation church member Jennie Hill Robinson was waiting to greet them.

While the church service took place inside, with music wafting into the parking lot, Anchor House support team members Kathy Sonnenfeld-Squires and husband Rick Squires of Bowie, Md., set up a refreshment stand for cyclists in need of a cool drink and a few bites of fresh fruit. Sonnenfeld-Squires said Anchor House, now in its 44th year, provides shelter and counseling to runaways and helps them “connect back” with their families if it’s safe to do so. For older teenagers and those in their early twenties, including many who have aged out of foster homes, Anchor House offers shelter and helps them navigate job and college applications.

According to Anchor House literature, the nonprofit’s main purpose “is to reach out to youth on the streets to reduce the incidence of runaways and homelessness. The goal is to build relationships with youth to engage them in services that will help them be productive members of society.” Sonnenfeld-Squires said that on a past bike ride, while the group was staying at a hotel in Pennsylvania, a woman and her two children approached the cyclists. “She came to say thank you because she’d been helped by the organization and wanted her kids to know.”

When the pandemic hit, Anchor House pivoted to a couple of self-paced options—a 500-mile bike ride and a 100-mile walk, both of which participants complete on their own. This year, the “classic ride” is back, but the other options have remained. This year’s goal is $500,000, and comes on the heels of two good years when organizers said the group raised a combined total of $1 million.

Dewayne Tolbert, co-chair of the ride committee and a resident of Ewing, N.J., said he’s participated in the event for 27 years. Former president of the board, he said the nonprofit organization “makes a difference” and “has become family to these kids,” who sometimes show their gratitude later on by inviting their friends at Anchor House to their college graduations, weddings and other special occasions.

On Sunday, cyclists pulling into the parking lot at Orange Presbyterian Church were happy with the temperate, overcast weather on the first day of their journey. Anchor House board member Russ Buckley of Lambertville, N.J., said he enjoys cycling in Virginia, even though it’s often hot: “Going between the towns, the hills are just beautiful. For the most part, we find good roads. And we’ve felt very, very welcome where we’ve stayed.”

The group’s next stop was Culpeper, where they would stay the night before traveling to Leesburg. From there, they would turn their bikes toward Pennsylvania and arrive in Trenton on July 16.

For anyone interested in participating in next year’s bike ride, go to the Anchor House website at www.anchorhouseride.org.

Laura Carlson, co-chair of the Anchor House ride committee, explains how the computer on her bike provides directions and data, including her speed and heart rate.

Cyclists pose with support team members who provide refreshments and fix bikes in need of repairs. Organizers said 77 cyclists were expected to stop briefly at Orange Presbyterian Church before continuing on to Culpeper on the first day of their seven-day bike ride and fundraiser.