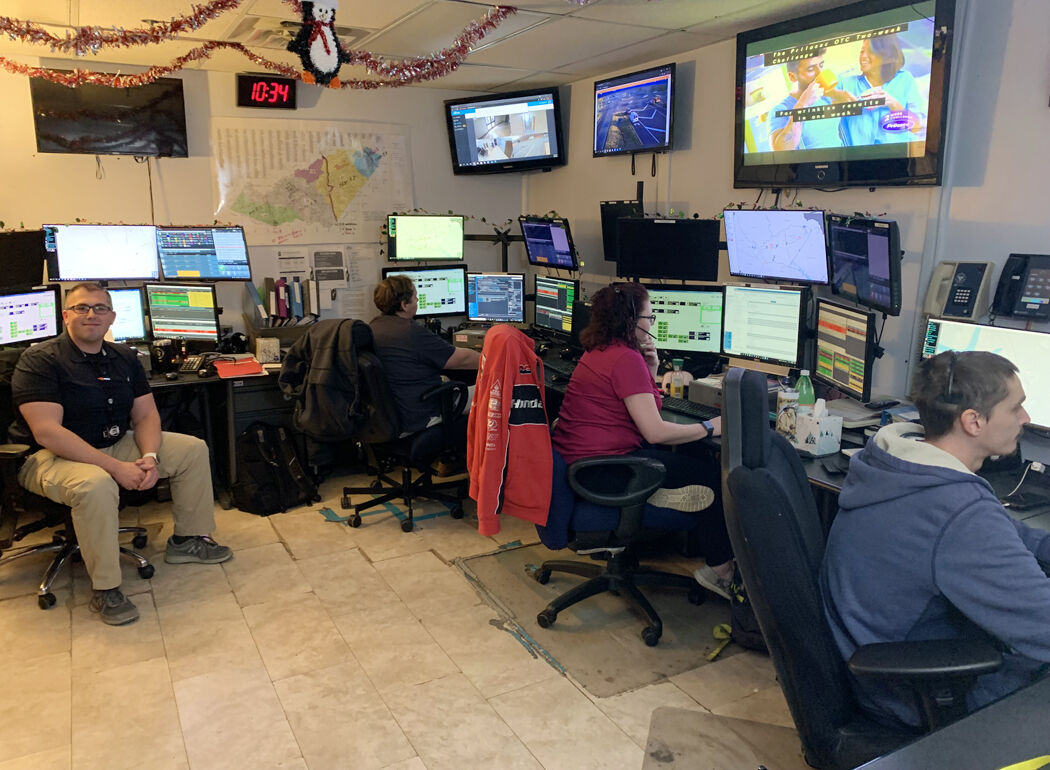 Pictured, from left, Orange County Emergency Communications Supervisor Tyler Williamson, training officer Jeremy Brown, and communications officers Kriste Farley and TJ Lettner work during a shift in the department’s current quarters in the basement of the Gordon Building. The department will soon move to a new state-of-the-art center in the county’s new public safety facility. 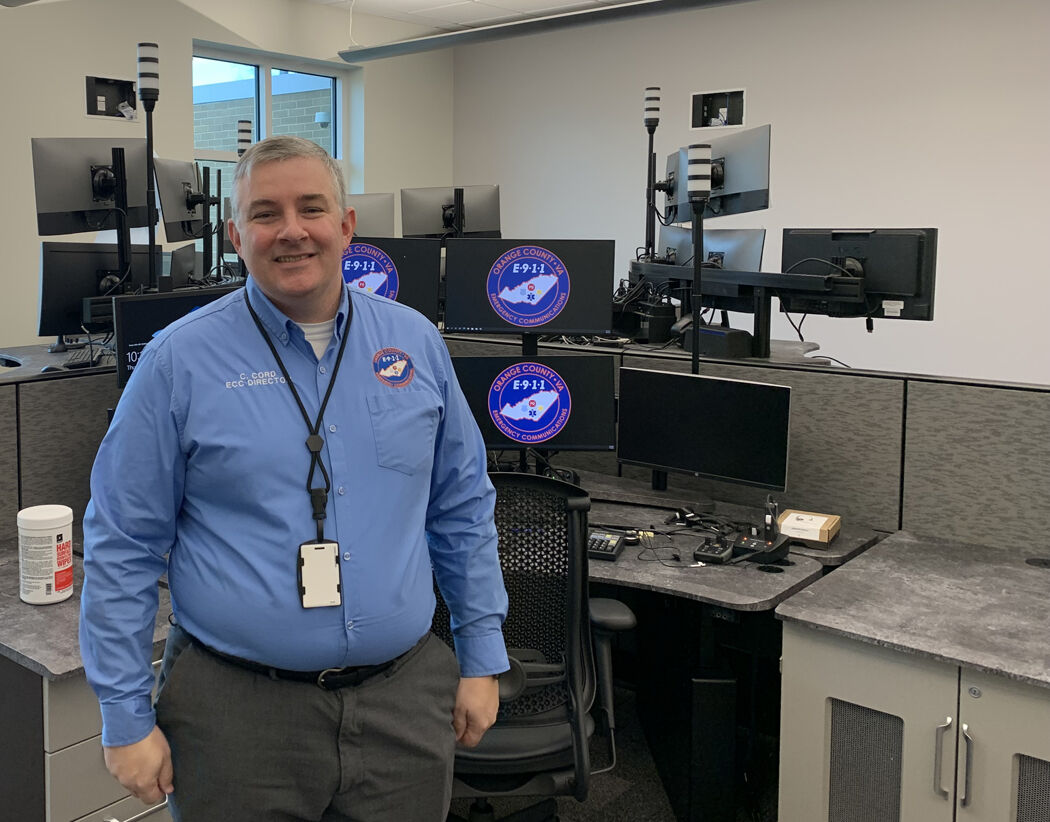 While law enforcement officers and fire & EMS crews are out on the front lines responding to emergencies, the unsung heroes of the 911 dispatch team are operating behind closed doors, cooped up in a small room in the basement of the Gordon building on West Main Street, doing their part to ensure safety for all citizens of Orange County.

Fortunately, they will be making the move to their vastly improved headquarters in the new Orange County Public Safety Building on Jan. 20.

With the new move comes new advancements in technology. The new 911 dispatch office will implement the use of a new radio system and next-gen 911.

The Harris P25 radio system, which will go online once the move is complete, will optimize connection with other radio systems and provide “pretty much seamless communications with our neighboring counties,” says Chris Cord, Orange County Emergency Communications Center Director.

“Currently the 911 system is relying on the same, decades-old phone system that’s been in place for quite a while. It’s all analog-based,” he says.

The current analog-based system does not always provide emergency communications officers with an accurate location for callers using cellular devices. Additionally, cellphone calls are not always directed to the correct 911 call center.

“If you’re calling from a cell, it bases your location on its best guess of where you are based on the number of towers. That’s why in large urban areas, that have a lot of cell phone towers, we get better location data than in rural areas,” Cord says. “Orange County is predominately rural.”

Next-gen 911 will bring emergency communications into the digital age. As landlines are starting to become a relic of the past, the new digital internet protocol-based system, powered by fiber optics, will provide 911 dispatch call centers with a more accurate location of individuals calling from cellular devices. Next-gen 911 makes use of the Geographical Information System (GIS) to pinpoint cell phone locations and direct calls to the correlating 911 call center.

The funding for the upgrade was provided by the state in an effort to provide next-gen 911 to every locality in Virginia.

Orange County received $643,000 in grant money designated towards next-gen 911 and its components.

Next-gen 911 will also make it possible for people to send pictures or videos to 911 call centers.

“Being able to receive photos and videos will provide our communications officers with unprecedented situational awareness, assist with better informed decision making and help our first responders do their jobs more effectively while keeping them safer,” Cord says.

He added that pictures can help with suspect identification and help communications officers locate callers that are unfamiliar with the area, as they can send a picture to 911 to help identify where they are.

“There’s some concern about what sort of things our dispatchers are going to be witness to. It’s one thing to hear what’s occurring, then to actually have the images associated with what is going on … it’s going to be interesting to see,” says Cord.

The new dispatch center has a quiet room, equipped with a massage chair, in case emergency communications officers need to de-stress after a traumatic call.

“That’s one of the things a lot of people don’t realize; it is traumatizing. There’s been proven cases where dispatchers experienced PTSD,” Cord says.

Cord, who was hired as Director of Orange County Emergency Communications Center in March of 2020, started his career as an emergency communications officer at a call center in Lexington, Kentucky. As he admits the job does come with some struggles, he describes the role of 911 dispatcher as “very rewarding.”

“We talk to people usually on one of the worst days of their lives,” he says. “But, in addition to the bad events you also are present through joyous times, you know, walking a family through childbirth or when we provide telephonic CPR, and we hear from the ambulance crews that they have a working patient and transport them to the hospital.”

Cord recalls one incident, just a year into the Kentucky job, where he dispatched an officer to the scene of a burglary. Gunfire was exchanged and the officer was shot in the face. The bullet entered below the nose and exited through the cheek. Thankfully, the officer survived and they still keep in touch to this day.

Not all calls are quite as serious, as Cord remembers another call from a woman concerning a custody issue. As the call went on, the woman claimed the father of the child in question was former President George W. Bush. Cord says the call became increasingly more bizarre and he seriously doubted the former president was at all involved.

Xiushka Gibson, who has been an emergency communications officer for nine years, says what drew her to the job was the opportunity to help the community.

“It’s nice knowing that you get to help somebody, especially during CPR, and that person lived,” she says.

The job presents more than just the opportunity to help others, as Gibson reveals another perk being “the adrenaline rush you get when you have a tough call.”

However, she says the job comes with the difficulty of not knowing the outcome for many of the calls.

“My biggest challenge was babies. Not knowing the outcome of most calls, it’s really, really tough on people, but especially when kids are involved. That’s the worst part of the day,” she says.

Gibson says she can follow-up with the responding EMS unit sometimes to check on the condition of a patient, but once a patient is admitted to the hospital, she loses track of their status.

For those interested in pursuing a career as a 911 dispatcher, the Orange County Emergency Communications Center is currently hiring. For more information visit www.orangecountyva.gov/e911.

We the People: Orange, Museum break ground for Charters of Freedom

Pictured, from left, Orange County Emergency Communications Supervisor Tyler Williamson, training officer Jeremy Brown, and communications officers Kriste Farley and TJ Lettner work during a shift in the department’s current quarters in the basement of the Gordon Building. The department will soon move to a new state-of-the-art center in the county’s new public safety facility.