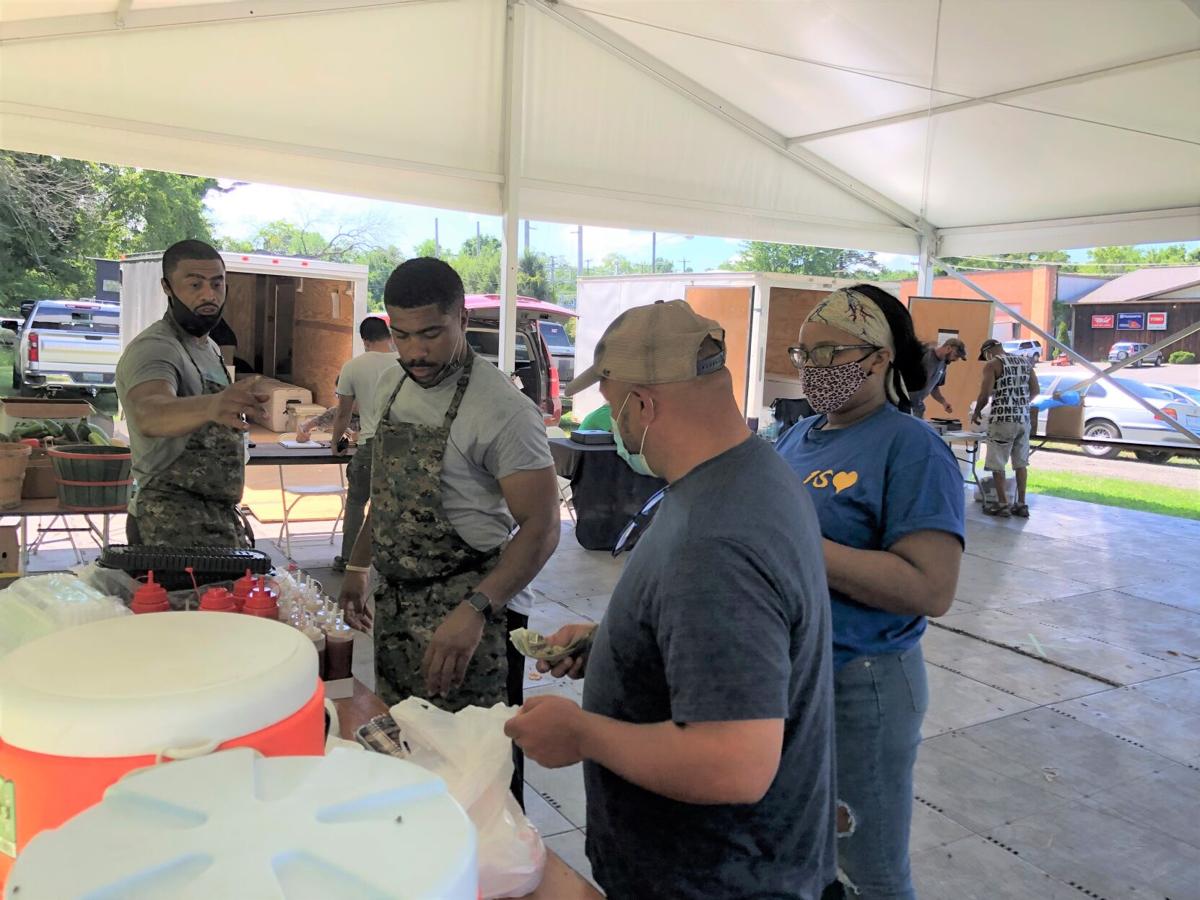 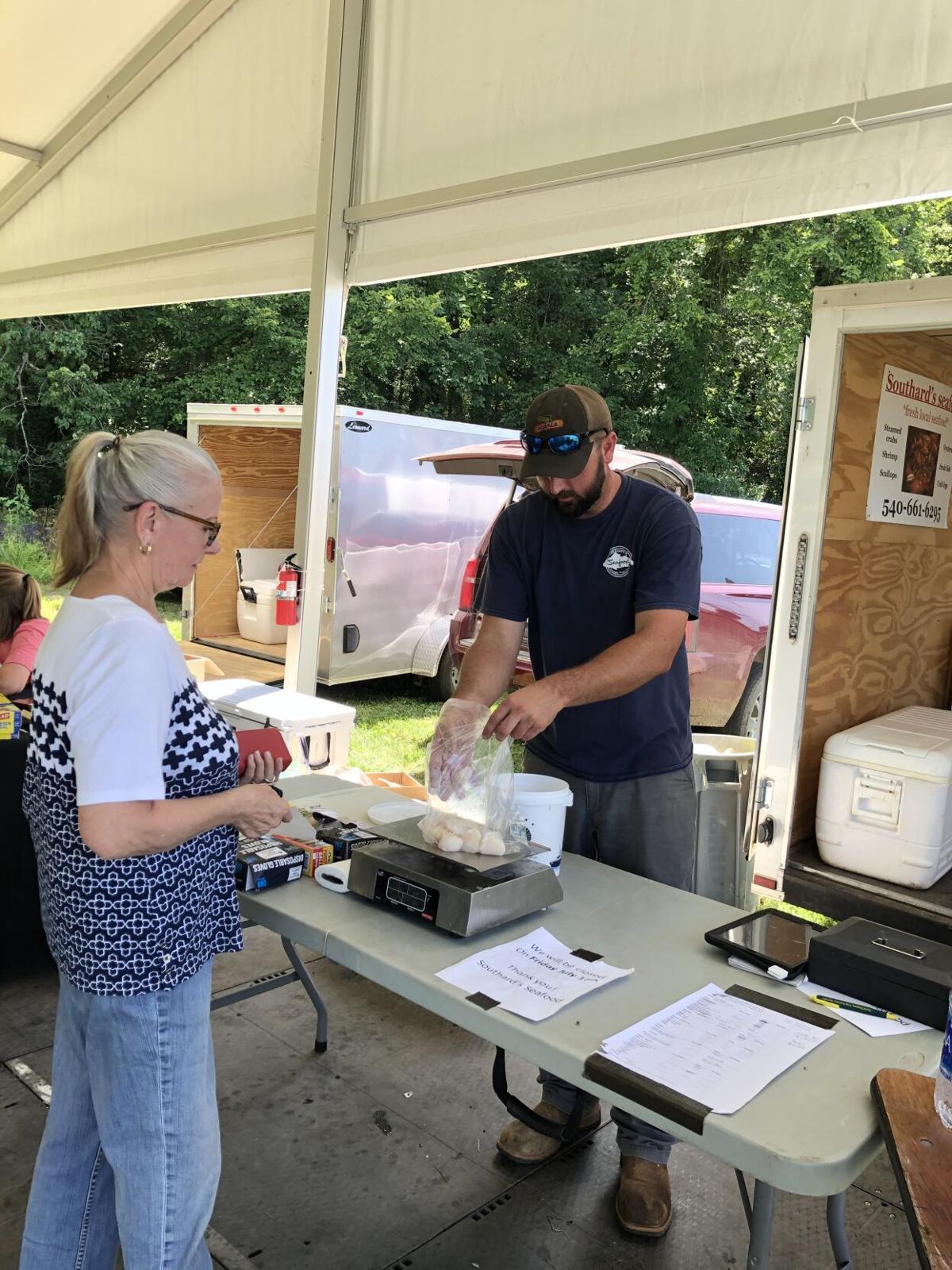 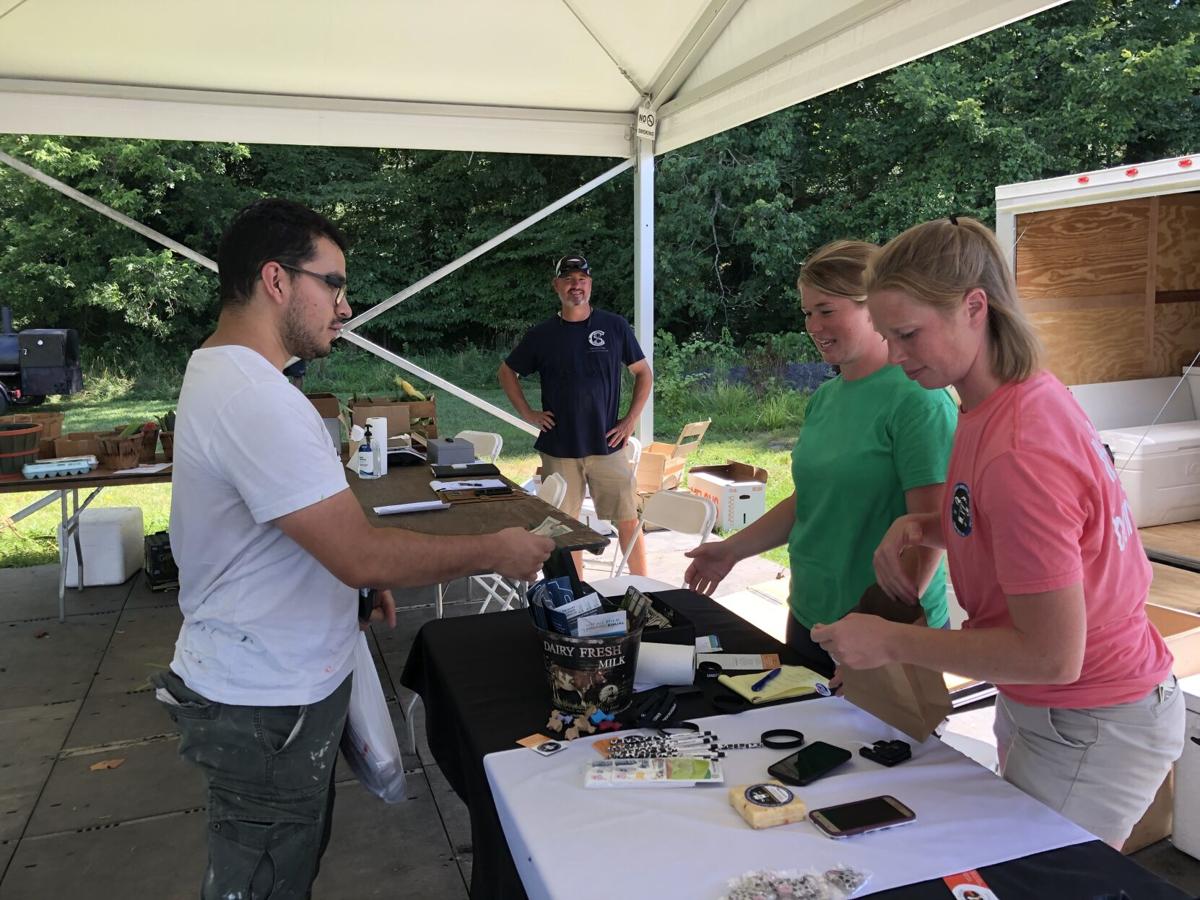 Jorge Padilla buys a block of cheddar cheese from sisters Molly Elgin-McWilliams and Ashley Elgin Hardesty at the farmer's market on Berry Hill Road. Carrington Farm owner Bill Reneaud, who sells beef, pork and other products at the market, looks on in background. 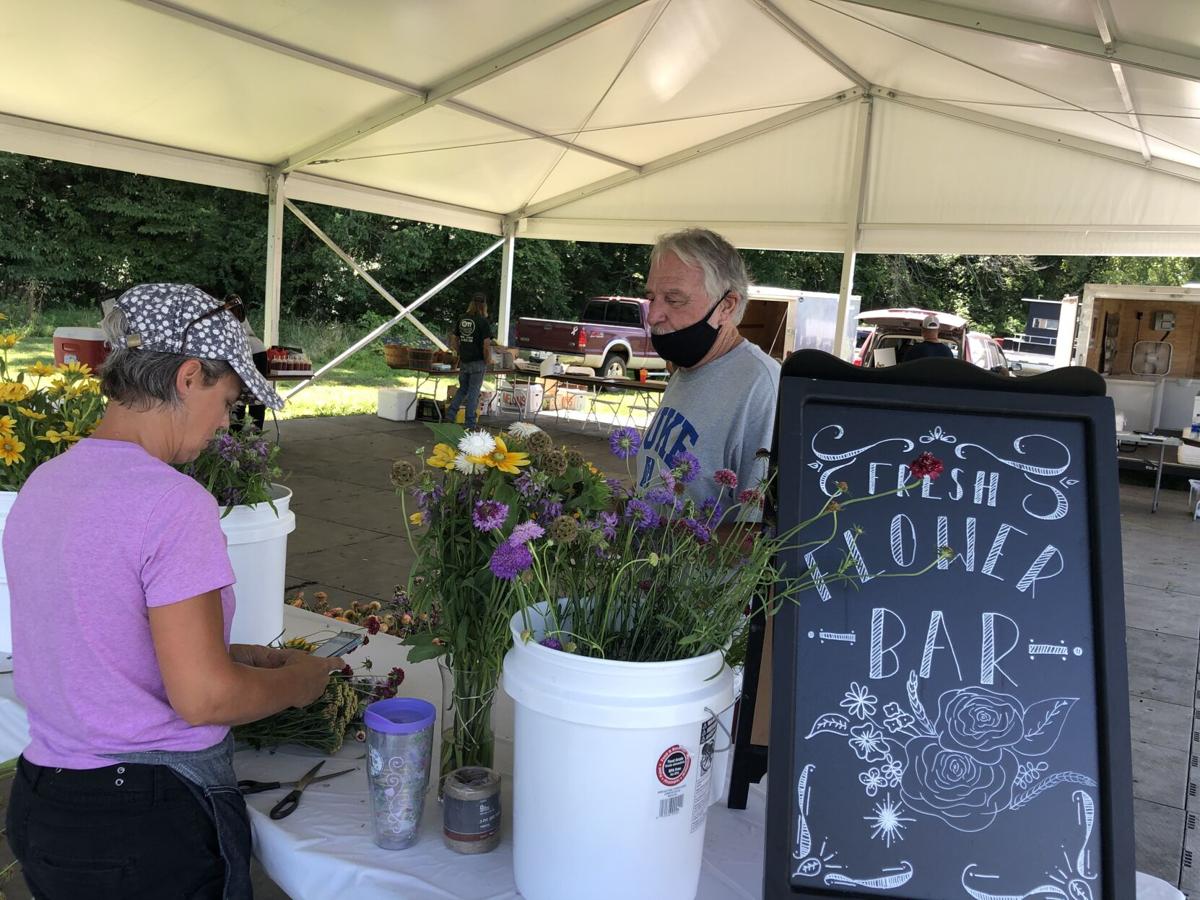 If you’re nervous about wandering up and down the aisles of a supermarket or not finding all the groceries that you want during the pandemic, Seven Acres Farmer’s Market in Orange offers an appealing alternative. Located beneath a large tent on Berry Hill Road across from Gibson Rental, the market has been open every Friday afternoon since May 8.

There are only half-dozen or so vendors right now, but with plenty of room to grow and lots of returning customers, the new venture is off to a promising start.

Kayla Quarles and her father, Perry, were buying barbecue from C&C BBQ Factory on Friday.

“I think it’s great. It’s good for the town, a good thing to support,” Kayla Quarles said, noting that her family had purchased seafood from Southard’s Seafood on a previous visit.

Another returning customer, Jorge Padilla of Orange, also gave the market high marks. As he exited the tent after purchasing a block of cheddar cheese from Harvue Cheese, he said, “I love it!”

In the midst of buying a bouquet from Stacey Chapman’s Fresh Flower Bar, Bruce Hoover of Rhoadesville described the market as “wonderful.” He added, “We’ve needed one forever. This thing is vibrant.”

Hoover and other customers seemed to know exactly what they wanted as they strode toward one vendor or another and quickly made a purchase. That sort of decisiveness is fine with Carrington Farm owner Bill Reneaud, one of the market’s organizers.

“We’re purposely not creating a shopping experience. Everything moves real fast,” Reneaud said, alluding to the concern about community spread of the coronavirus.

During a break between customers buying his beef, pork, poultry and produce, Reneaud happily described how he and seafood salesman Ben Southard decided to “partner up” in the spring. Southard has been selling seafood out of the back of a truck on Berry Hill Road for several years, filling the gap left after Orange’s iconic “fish man” Newton Williams closed up his seafood truck for the last time in late 2017.

Southard and Reneaud did well selling a wide array of meat and seafood. After a few months of steady sales, and as the pandemic began taking its toll on supermarkets, they talked to the owners of Gibson Rental. With the enthusiastic support of Southard and Reneaud, the twin Gibson brothers and their wives (Ryan and Rachel, Brian and Gail) came up with Seven Acres Farmer’s Market—named for its location on a seven-acre field owned by Gibson Rental on Berry Hill Road.

During a time when tent and table rentals are down due to the pandemic, things worked out well for all involved. Gibson Rental leases a big tent and tables to local vendors—and in return, the vendors have direct access to customers in search of fresh, locally sourced goods.

Ashley Elgin Hardesty and Molly Elgin-McWilliams of Harvue Cheese said they have enjoyed running into old friends who shop at the market. But make no mistake—the sisters are at the market to sell, not just to socialize.

Elgin Hardesty, who lives in Berryville, said Harvue Cheese offers “a little something for everybody,” including garlic and chive cheddar, which is one of their most popular items.

She said, “Even when the world is in a pandemic, farmers are still working. It’s sort of an assumption that we were going to do our job regardless.”

“And continue to do so,” Elgin-McWilliams added.

Rachel Gibson said much of the market’s publicity has been done via social media. “Word is spreading each week. I hear people more and more talking about it. I think it’s been a really positive thing.”

She explained that this is not the first farmer’s market in Orange. There was one on Short Street for a while and later, in Taylor Park. But with few vendors, she said they didn’t last.

The new market’s location should work in its favor, since thousands of cars go up and down Berry Hill Road every day.

Landes-Carter is delighted with the market, which she describes as a “fantastic” addition to the county and a great way to connect consumers with local farmers. She said she hopes the market will grow and help meet the needs of locals and tourists alike: “I think it’s going to be a great resource.”

Andy Hutchinson, president of the Orange County Farm Bureau, is another fan.

“I’m all for it. I think any time a small farmer can add value to his crop is a good thing. A farmer’s market is certainly doing that,” he said. “It provides the community with an opportunity to enrich themselves with some local farm-raised products. It’s good for the community and the farmer.”

According to Rachel Gibson, vendors pay $40 per day or $400 for the season. If a vendor decides to commit to the whole season after an initial test run of a few weeks, money already paid will be deducted from the bill for the season. She said the current season will run through the Friday before Christmas, weather permitting, and next year’s market will open on April 1.

Southard, whose seafood business anchors the market, said he’s on the lookout for someone to sell fresh-baked bread. He wants the new enterprise to meet as many grocery-shopping needs as possible.

The market is all about fresh food and connecting farmers with the community. It’s also all about hope during an uncertain time.

“We try to practice safe social distancing and proper handling of the food. To me, it makes sense to be outside. It’s a one-stop shop. You can come get everything you need—and why not?” Southard said before donning his plastic gloves and filling a bag with fresh scallops for a smiling customer.

Seven Acres Farmer’s Market is on Berry Hill Road (Route 20) across from Gibson Rental. It will be closed Friday, July 17, but will return to its weekly schedule on Friday, July 24, open from noon to 5:30 p.m.

Vendors interested in learning more about Seven Acres Farmer’s Market or signing up for a table may contact Gibson Rental at Gibson.rental@yahoo.com or call 661-0001.

Hilary Holladay covers education and politics for the Orange County Review. The author of five books, she is currently writing a biography of the poet Adrienne Rich.

OC teachers speak of frustration, exhaustion at school board meeting

In a school division that prides itself on being a family, Monday’s school board meeting revealed a family in crisis. Five teachers expressed …

Pandemic plans: Orange County's historic courthouse may be put back in use

Orange County’s historic courthouse—the one that faces Main Street in Orange—has sat empty since the early 2000s. But that may change, if the …

Living in a "dead" city

The thing to say now is that New York is dead.

In May, Daisy Marquina was finishing up the semester at San Jose State University. The 21-year-old former Unionville resident was studying for…

At Dogwood Village, the “show” must go on(line).

Jorge Padilla buys a block of cheddar cheese from sisters Molly Elgin-McWilliams and Ashley Elgin Hardesty at the farmer's market on Berry Hill Road. Carrington Farm owner Bill Reneaud, who sells beef, pork and other products at the market, looks on in background.