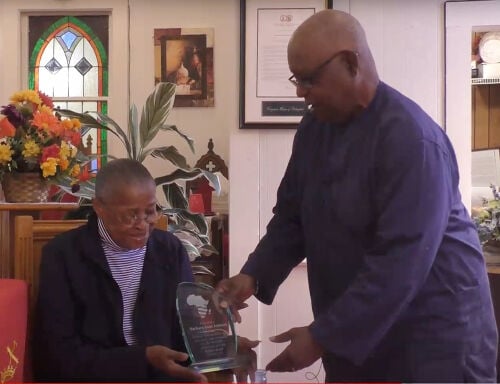 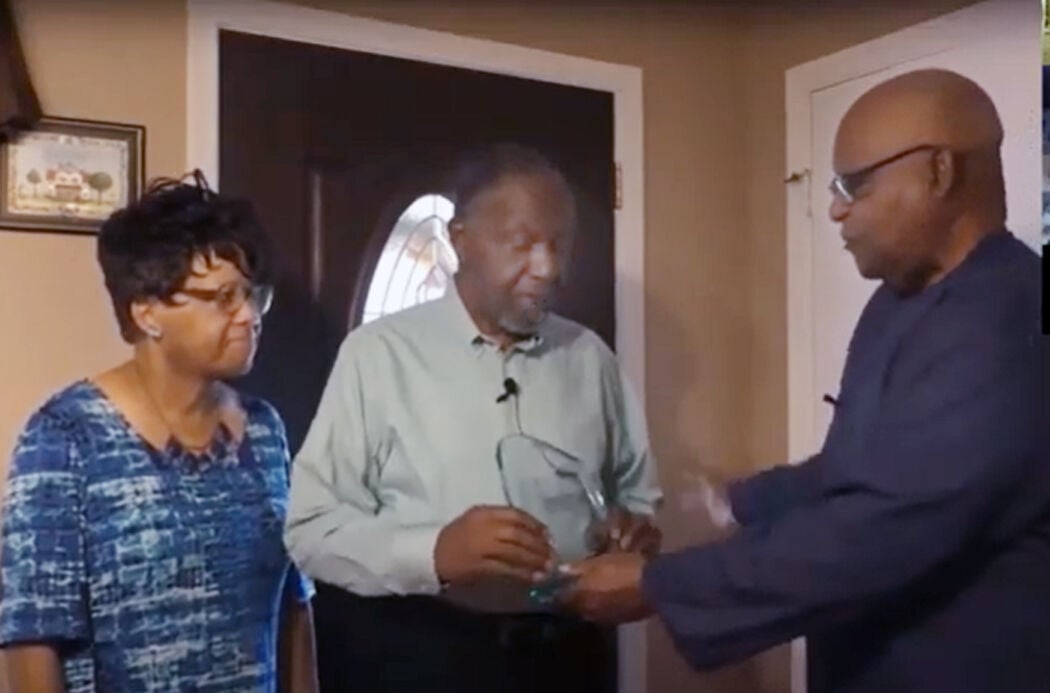 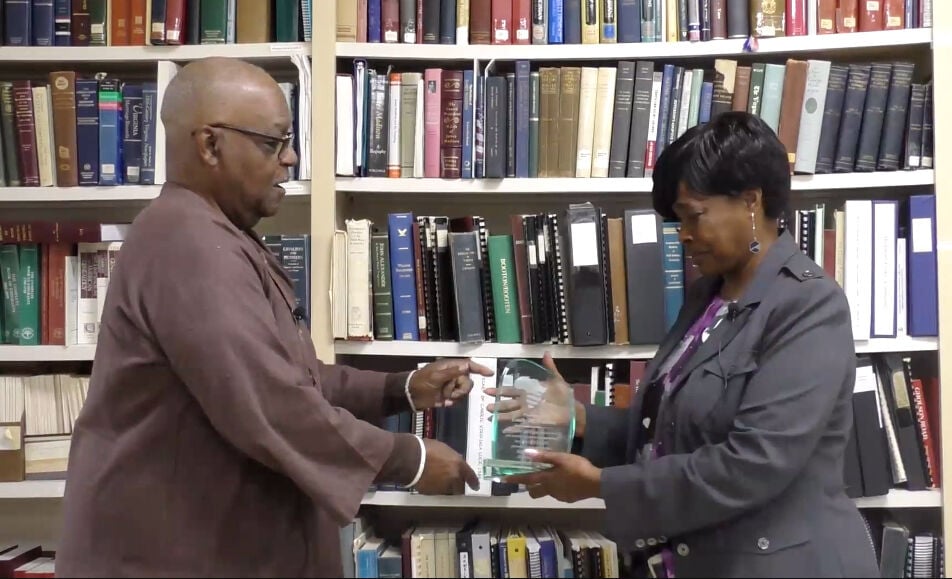 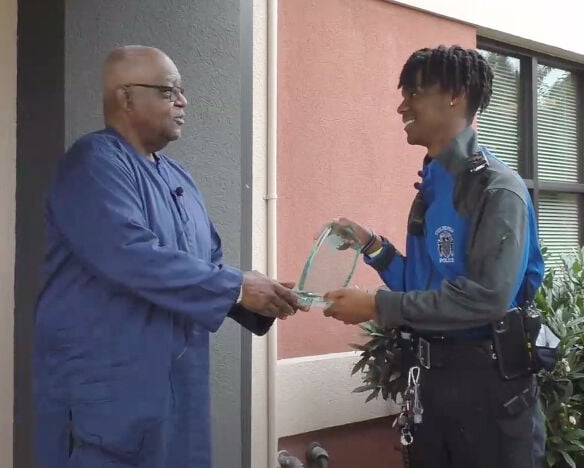 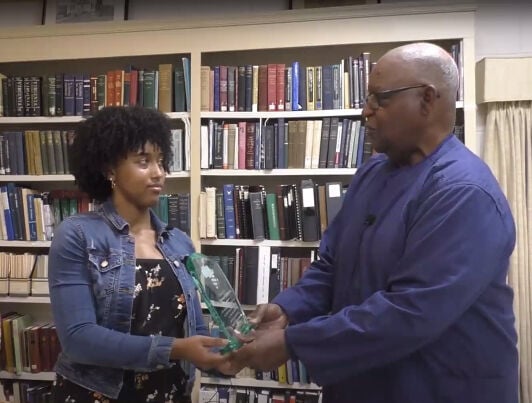 For the second year in a row, the Orange County African American Historical Society presented its annual Eclipse Awards in a virtual program broadcast to members and guests.

The Eclipse Awards are presented to those individuals and organizations that have consistently gone above and beyond routine of raising awareness of Orange County’s African American people and history. The awards are decided on by board and members of the community.

The OCAAHS announced this year’s winners in the fall, before presenting the awards individually and later broadcasting videos of the recipients as part of the annual celebration.

“As you know, these usually take place in person, but this year and last year, we weren’t unable to do that, obviously, because of COVID-19,” OCAAHS President the Rev. Darryle Crump said in opening the Dec. 9 awards program. “We are grateful to all of you online with us tonight, for truly we have a lot to celebrate. We have five nominees who have done great things in our community and we want to celebrate them and highlight just a small portion of the great activities that they’ve got going on in their lives. We want people to know more about them, know at least as much about them as we know about them.”

The OCAAHS launched the Eclipse Award program four years ago and last year added the Eclipse Youth Award to recognize those young people who have demonstrated through their volunteerism, leadership, and other activities a commitment to raise awareness of Orange County’s African American people and history.

During last month’s virtual presentation, OCAAHS members introduced each winner before a brief video of the Rev. Crump presenting the recipients their awards in person.

Johnson, often referred to as “Noonie,” is a native of Orange County and learned early in life that her mission was to help others.

Johnson was recognized for her efforts to help countless people seek training and leverage opportunities to enhance their careers.

In presenting the award, Crump described Johnson as “a giant in the Orange County area. We appreciate all that you’ve done and all that you continue to do, and the life that you live and the expectations that you have from your community and your children as well.”

“I appreciate it, I really do, though I don’t know whether I deserve it. I thank you,” she humbly offered.

Lewis has a long history of service in both Orange and Madison counties, and with his wife, Shirley, has fostered and cared for many children in their home providing food, shelter, and protection in a good family environment. He has served in pastoral roles for nearly 40 years, and is the founder of the Madison Association of Continued Equality and a member of the Madison Free Clinic Board, and chair of the George Washington Carver Regional High School Alumni Association, among other acts of community service.

In presenting the Eclipse Award to Frank and Shirley Lewis, Crump said, “We praise God for the great work that they’re doing here in the community. Pastor Lewis is constantly doing things through his church, and around the community to help so many other people.”

“I’m very humbled by the fact that I’ve been chosen for this award, and certainly, with the service and work I do with the community, I look for no glory, I look for no kind of special recognitions,” the Rev. Lewis said. “I just love blessing people. I just love helping people. I am greatly humbled that they chose me for this award from that plan to continue to do the works that will bless people throughout our area and our communities.”

A lifelong resident of Orange County, Winkey was recognized for her longtime service on the Gordonsville Town Council, where she currently serves as vice-mayor, and other organizations throughout the Gordonsville community, including the Woodberry Cemetery Association.

In presenting Winkey’s award, Crump acknowledged her service on the town council, but noted, “It’s just the tip of the iceberg of her contributions to the community.”

“I do believe in serving the community that I live in,” she said in accepting the award. “I’m just grateful that I’m able to help those that are in need. With a humble heart I accept this award. Whether I work in the church or with town council, or wherever in the community, I believe in helping where there is a need.”

Martin, a 2021 graduate of Orange County High School, is the International Executive President of Distributive Education Clubs of America. He is a youth ambassador for the Just Orange community action group and plans to attend Virginia Tech following his year of DECA service. Currently, he works at the Culpeper Police Department and one day hopes to enter into politics.

In presenting the award, Crump noted Martin is, “doing great things in the community … and the society is proud to present this eclipse award to you for all that you have done and all the plans that you have in your life.”

Martin thanked the OCAAHS as well as the members of the Orange County community. “Thank you all so much for standing by me and being the best hometown I could ever ask for. I’m so excited to start my next journey at Virginia Tech next fall.”

Robinson is a senior at Orange County High School and was recognized for her academic excellence as well as her community involvement, including assisting with the Black Business Expo which was held at the Carver Center in August and volunteering at the Love Outreach Food Pantry. Interested in the STEM field (science, technology, engineering and mathematics), Robinson anticipates pursuing a career in mathematics or as an analyst.

“She’s doing great things in our community and we appreciate and commend her for all that she is doing,” Crump said in presenting the award. “We also salute her parents for the great job they have done, in rearing and raising this young lady.”

In accepting the award, Robinson thanked the OCAAHS, particularly those who nominated her. “I’d also like to thank God for blessing me with parents who raised me to have the qualities that led you all to nominate me for this award. Next year, I plan on attending a four-year college, where I will major in computer science and math.”

In closing the program, Crump said, “The OCAAHS is proud of these five individuals who are doing great things in Orange County. And as we said at the top of this presentation, they come from various backgrounds and the Lord has blessed Orange County to have these people in our environment, doing great things for their community. And for that we salute them.”

To join the OCAAHS or for more information about the organization or its programs, visit www.ocaahs.org or call Crump at (301) 520-1082.

The new year dawns with stories of the previous one. The front page of the Jan. 6, 1972 Orange County Review recaps the top story from 1971—“L…

It’s the week of Christmas and a Christmas tree graphic in florid script at the top of the front page of the Dec. 23, 1971, issue of the Orang…

In last week’s issue of the Orange County Review, the paper published an aerial shot inside of the new Virginia Electric and Power Company nuc…

The front page of the Dec. 30, 1971, Orange County Review is filled with good news as the year winds to a close. “Cash registers ring to rack …

It may be getting close to Christmas, but local boards are busy with county business as 1971 nears its end. According to the Dec. 16, 1971, fr…