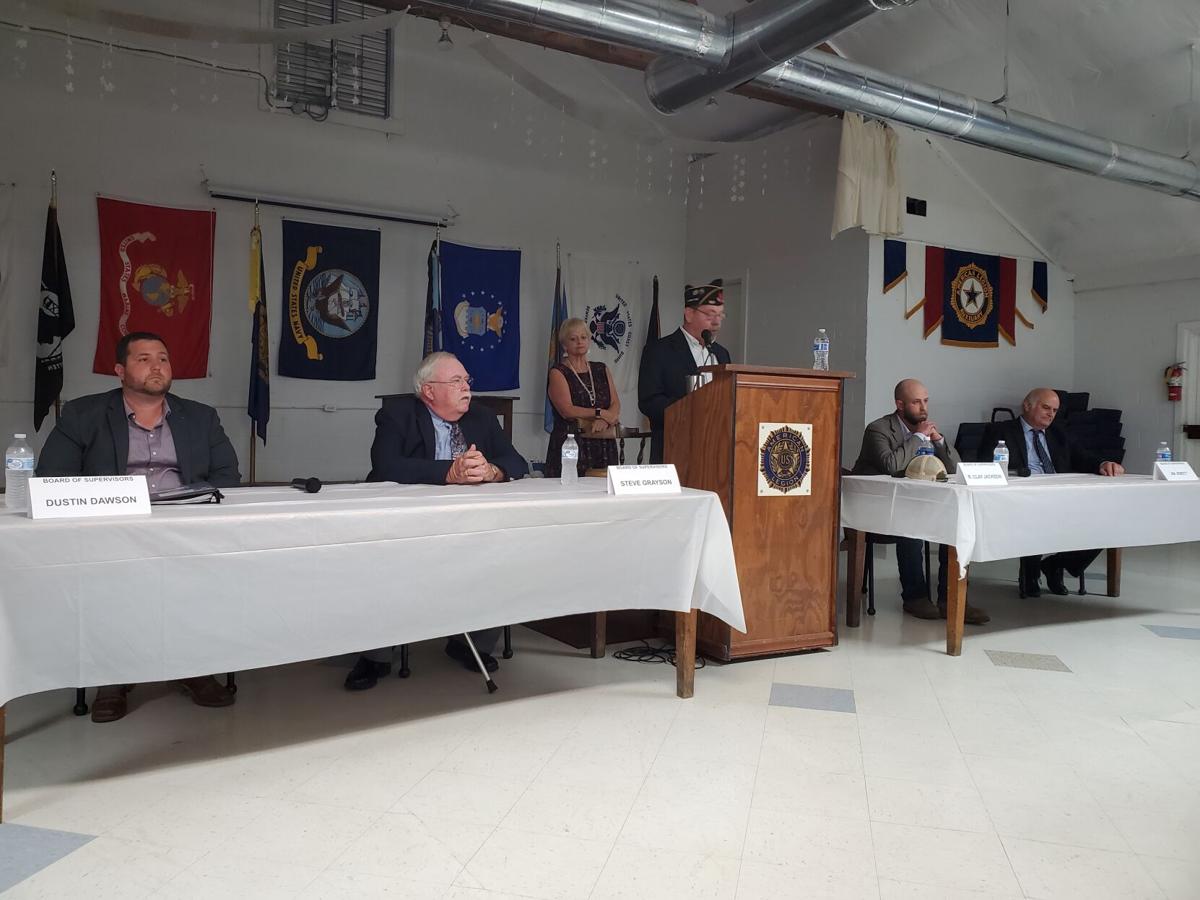 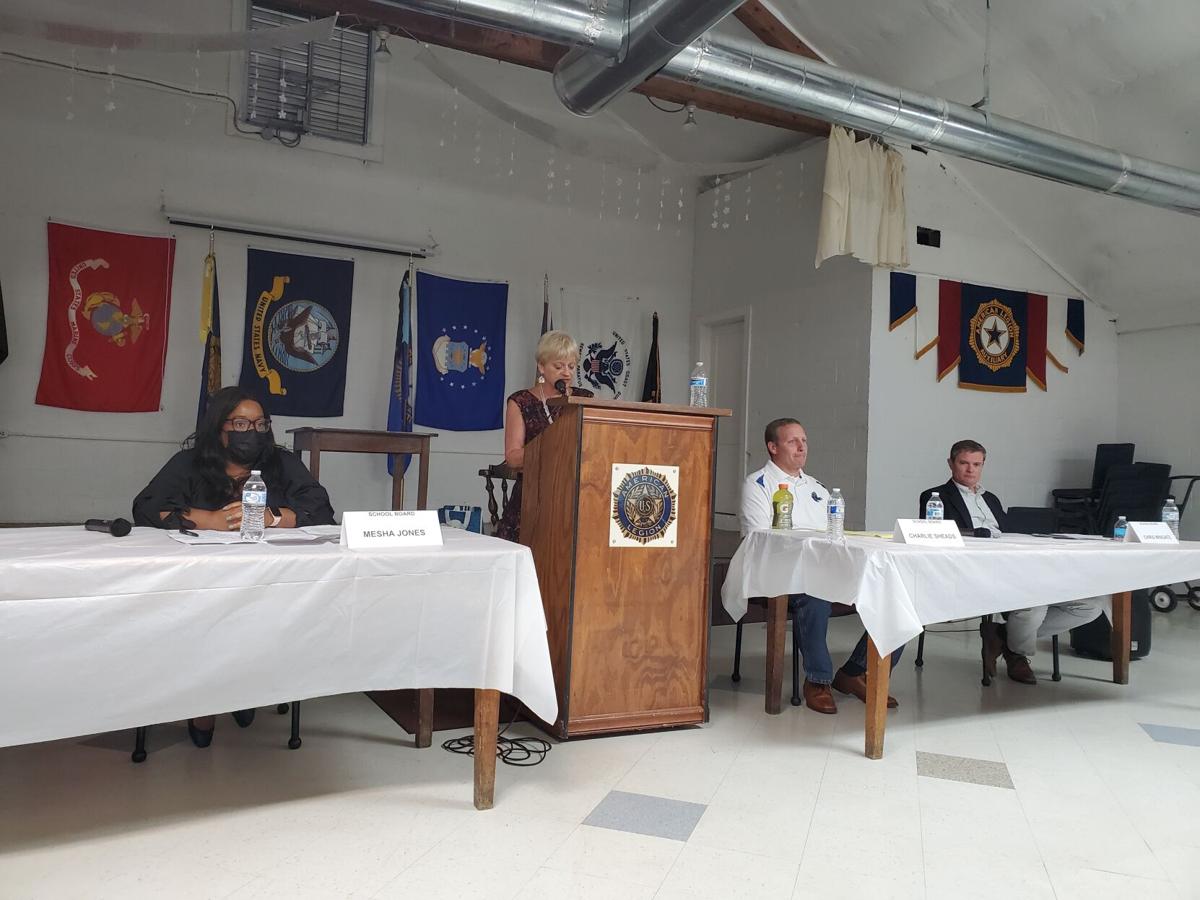 Jackson, a farmer, is seeking his third term on the board. He said the supervisors are a reactive board, listening to the needs and concerns of the citizens. He pointed to the recent internet initiative and small and large businesses coming to the county as some recent successes.

Dawson, an electrician, said he was inspired to run after being frustrated by the direction the country is moving. He said he’s a common sense guy who will follow the money closely and said he’d like to see capital improvement projects last and count, possibly saving money by utilizing staff.

Longtime volunteer and lifelong county resident Steve Grayson said he loves Madison County and is running to keep it as is. Grayson has served the county for decades in various capacities including the rescue squad, the fire company and the sheriff’s office. He also retired from the local branch of the Atlantic Union Bank.

Jewett, a farmer and JMU lecturer, said he cares about the country, county and the people. He said the country is in trouble, but it’s a war that is won or lost at the local level. He said he’d like to keep spending under control, increase economic development and is a second amendment supporter.

In addressing their concerns about the budget, Jackson said a main issue is how to not raise taxes while catching up on the necessary items in the county. He said budgeting conservatively in the past has paid off with the newly renovated administration complex. He also said COVID related funding helped to knock some items off the list.

Grayson said the budget will continue to increase, pointing to unfunded state mandates. He said it has to be looked at line by line.

Jewett said the 3% real estate tax increase enacted this fiscal year generates $525,000 or 1.1% of the total budget. He said it would take eight solar farms or $30 million in retail sales to cover that amount and he finds it hard to believe the budget couldn’t have been cut by that same percentage.

Dawson agreed that there has to be a way to save 1%. He said some people have to choose between purchasing their medicine and paying taxes.

All four candidates agreed that increasing business would be the best way to increase tax revenue without burdening homeowners. Dawson said the right businesses have to be attracted and said boosting tourism would also be beneficial. Jackson said small businesses are popping up throughout the county, but that the community has to decide what it likes. He said everyone wants business, but they don’t want it near them. Grayson said small businesses are the lifeblood of the county and need to be encouraged along with encouraging tourism. Jewett said more businesses need to be attracted, but smart growth is important even if it’s done a little bit slower.

Three of the four candidates said they would be against imposing a business license, but Jackson said he could really go either way.

Candidates were also asked about the longstanding, long-vacant Criglersville Elementary School. Grayson said the county made a mistake years ago when it turned down a $200,000 offer for the building. He said if someone wants it and can use it, give it to them. Jewett agreed saying it was an example of holding out for more money and getting stuck with an unwanted asset. He also suggested giving it away. Dawson said if its only costing money, get rid of it. Jackson said the board has tried to give it away and had several people look at it, but none have bitten. He said the problem is if its given to the wrong person, it’ll just come back to the county.

All four candidates said they would research issues if unfamiliar with them and would be in favor of hosting town hall meetings.

In closing, Jewett said taxes are real money from real people, not just numbers on a paper. He said he’s learned hard work, responsibility and how to make things happen, all qualities he would bring to the board if elected.

Grayson said he’s passionate about the county and promises to research every item and vote the best for the county as a whole, not a specific group. He said every time he votes to spend money he would remember its taxpayer money.

Jackson said government is the ultimate service industry with the board existing to serve the citizens. He said he brings common sense and farmer practicality to the board.

Dawson said he’s also a common sense guy who has worked with his hands most of his life. He said he’d be patient to serve the citizens and would be in direct communication, answering both phone calls and emails.

Following the board of supervisors’ candidates, three of the four school board candidates took the hot seats. Incumbent Nita Collier was absent due to a long ago scheduled family vacation, but gave a brief address via letter. Newcomers Mesha Jones, Charlies Sheads and Chris Wingate were on hand to answer questions.

Jones is a nurse, parent of two and Army veteran. She said she wants students to be successful when they leave and cares about educators and teaching students critical thinking skills.

Sheads, also a parent, said he loves Madison County and the people of the county. He said COVID-19 has brought many challenges, but also taught parents what their kids are learning in schools. He said schools need to get back to reading, writing and arithmetic as well as history.

Wingate, a parent of five who retired from the Army two years ago, said he loves Madison County. He’s a Madison County High School graduate and would like to preserve the specialness that is the school division.

Similar to the supervisor candidates, school board candidates were asked about the budget and how to ensure the division is spending its money correctly. Jones said the school community has the opportunity to evaluate the budget and its important the board works with the supervisors to address any unfunded mandates. She also pointed to the need for grants, several of which have been received by the division.

Sheads said it doesn’t make sense that large cities tell small communities what to do pointing to issues about critical race theory and transgendered students. He said not everything the division is told to do is money well spent. He also said there’s no correlation between spending money and student performance.

As for personal information, Wingate said he homeschools his children because it worked well for them as an Army family while allowing them to provide religious values. He said he believes all students should have opportunities. Sheads said his oldest child is in college while the other three are homeschooled which was best for his children due to COVID and recent mandates. Jones said of her three daughters, one is a college graduate while the remaining two are in the sixth and 10th grade in public school.

Sheads said he himself barely passed high school and didn’t know if he had qualifications to be on the board other than he says what he means. Jones holds a bachelor’s degree and is working on a masters, but said she can think outside of her education. Wingate has his masters, but said common sense is much more important.

Sheads said he’s not prepared to appease one group over another and sexualization needs to be left out of schools. He said its racist to tell any child of any color that they are oppressive over or submissive to anyone else and that he believes in allowing students who can excel, to excel.

Jones said it’s not up to her to judge any student for their beliefs, but rather it’s her job to support them to get the best education possible. She said she supports the current curriculum and pointed out that critical race theory is taught at the collegiate level and should stay there. She also said equity education is about providing the same educational opportunities to all students regardless and that they have the resources they need to be successful.

Wingate said his faith teaches him to treat everyone with respect, but he resigned from Albemarle County Public Schools because they were asking him to affirm a transgender policy he didn’t agree with. He also said critical race theory is a code word for new ideas that are divisive and schools have to teach children to be proud of their country while also teaching history and the mistakes that were made. He said equity education is a bad idea that sounds good. He said it has good ideals with everyone being treated with the abilities to excel, but behind that is the idea that America is about oppression which isn’t fair.

All three candidates said communication is the key to building trust between the community and schools. Sheads said an issue is that the parents have communicated, but they also have to be listened to.

In closing, Wingate said he favors parental rights over the bureaucratic and that people need to respect the role of faith in schools whatever that faith is. He also said schools need to teach children to love America.

Jones said she’s committed to working with everyone to come up with solutions to help students and teachers succeed.

Sheads said Madison is a heart in Virginia and is God’s country. He said his goal is to support parents so the kids get what the parents believe their children need most.