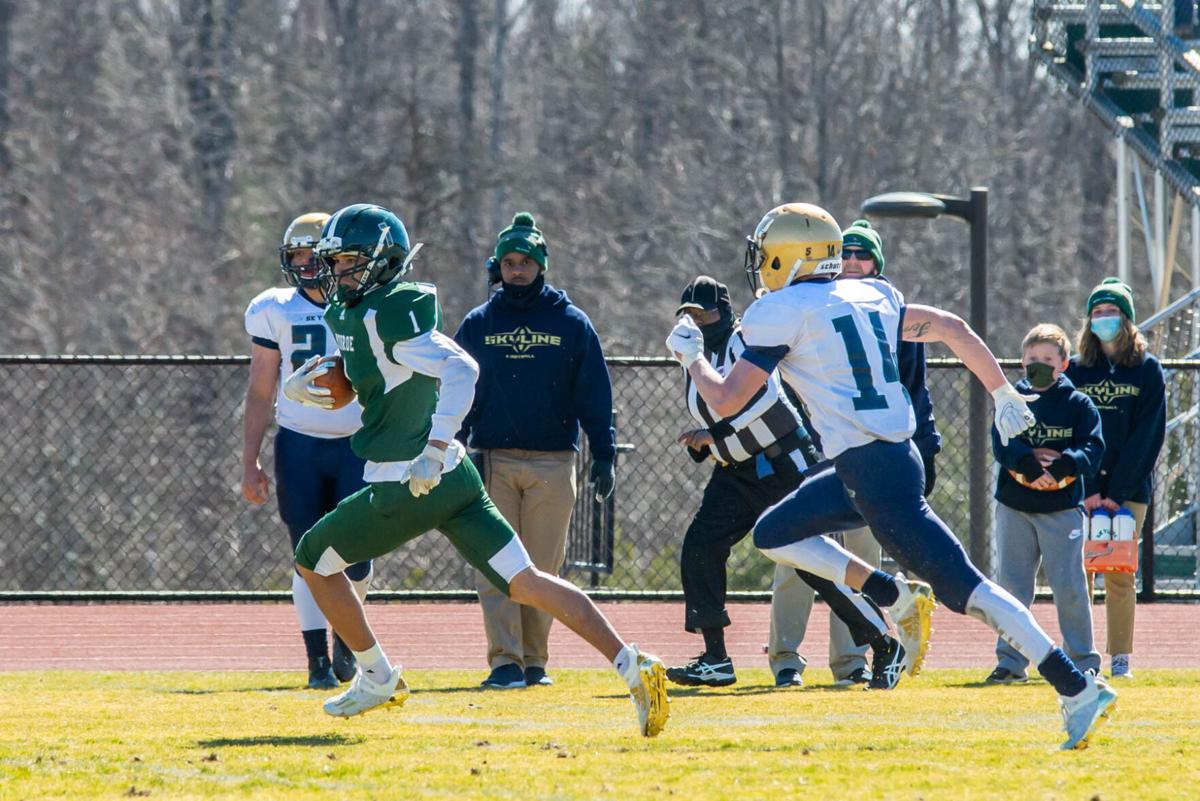 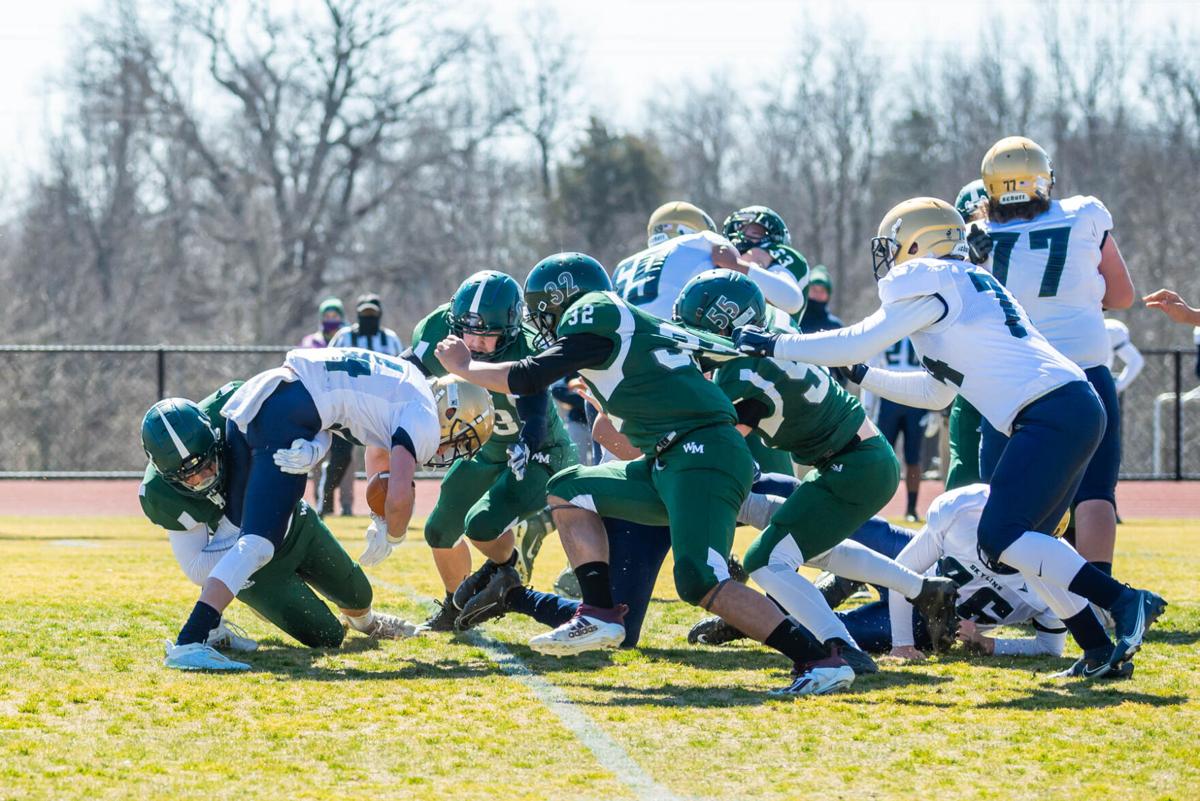 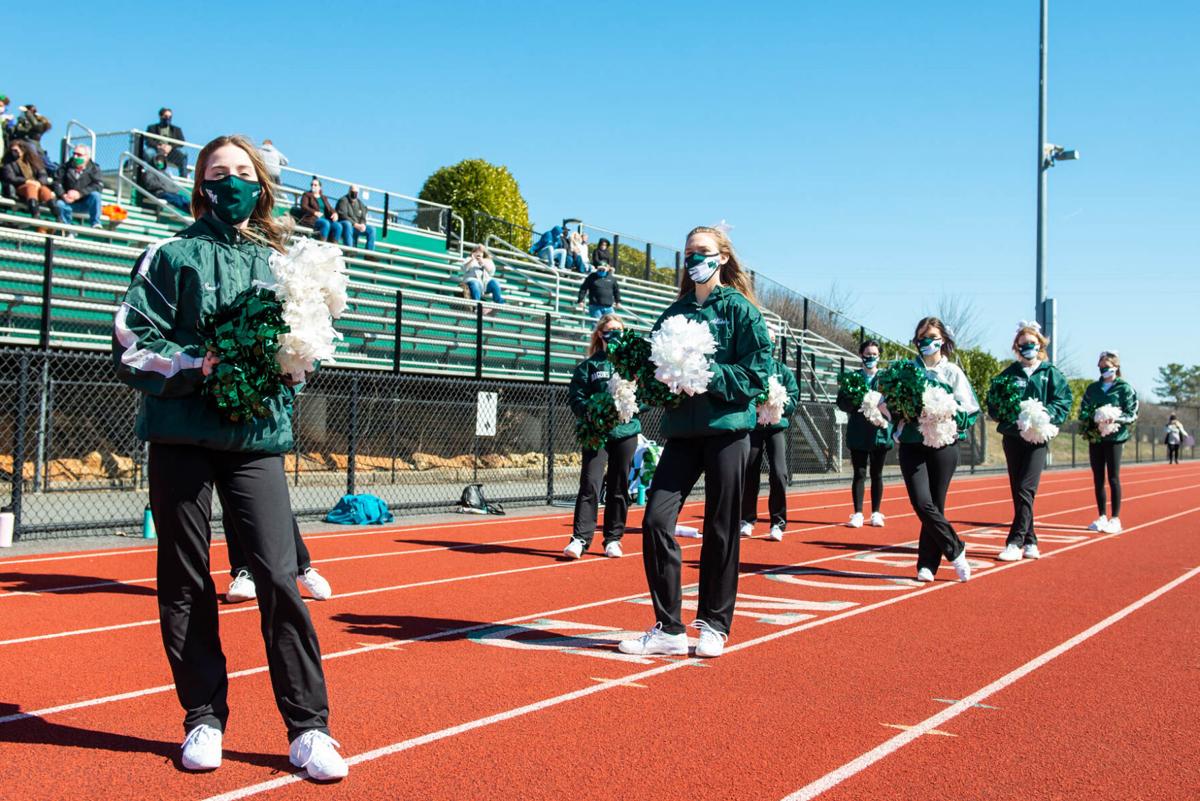 In its first home match in nearly 16 months, the Dragons football team faced injuries, inexperience and penalties for its first loss of the season against Skyline High School on Saturday, March 6.

“Last year we had good experience and guys who could back them up,” said Dragons head coach Jon Rocha after the game. “This year, we have experience on our first level, but our second guys who go in, not so much, and they’ve got to step up. That’s what I told them—when the guy in front of you goes down, that’s your chance and we didn’t stop them.”

William Monroe was first on the boards when the Hawks’ punt return didn’t go as planned, placing the ball for the Dragons on the Hawks’ second yard line within the first two minutes of the game. Senior Alex Hoffman earned the touchdown and senior Will Auer’s extra point was good, bringing the score to 7-0, Dragons.

Monroe earned two quick offside calls, giving the Hawks an additional 10 yards in three plays. The Hawks earned a false start penalty immediately after, giving them a five yard penalty and forcing them to punt the ball, which went out of bounds on William Monroe’s 47 yard line.

Dragons quarterback Blaise Van Dyke handed the ball to Hoffman for a gain of six yards. On Hoffman’s second carry he earned 11 yards and the first down. On a series of three more carries, Hoffman earned another first down. On fourth down and two yards, the Dragons decided to go for it, but didn’t make it.

The score at the end of the first quarter was 7-0.

The Dragons got the ball after a change on downs. Senior Logan Barbour carried the ball for a touchdown and Auer’s extra point was good, bringing the score to 14-0 for Monroe.

The Hawks immediately responded with an 80-yard carry by senior Logan Maiatico along the outside, bringing the score to 14-7, Dragons.

The Dragons earned another offside penalty, taking the ball back five yards. Junior Shea Jeffers carried the ball about 35 yards, but it was called back due to a block in the back. Maiatico tackled Hoffman on the next play, injuring Hoffman’s ankle and taking him out of the game. The Dragons punted with 2:28 left in the first half.

The Hawks capitalized on that with a quarterback carry for Santucci, tying the game at 14 all with 31 seconds left in the half.

Senior linebacker Josh Johnson scored for the Dragons with seconds left in the half, but was penalized for unsportsmanlike conduct for celebrating in the end zone, forcing the ball back 15 yards for the extra point attempt. Just as Auer set up for the kick, the wind picked up and he missed the posts, putting the score to 20-14 at the half.

In the second half, the Hawks were able to move the ball down field well, allowing for another Santucci carry touchdown with 5:21 left in the quarter. The score was 20-21 halfway through the third quarter.

Monroe earned another five-yard penalty for a false start and then Blaise was sacked by Hawks senior Will Wolf for a loss of six yards. Johnson earned the first down for the Dragons, but also was out for the rest of the game with a possible concussion after helmets collided.

“(Alex Hoffman and Josh Johnson) … on defense, it takes a toll,” Rocha said. “We have but so many backups. Josh will be fine; it’s Alex I’m worried about.”

Within the first minute of the fourth quarter, Blaise passed to Barbour for another touchdown. The Dragons went for two points, but fell short, putting the score at 26-21, Dragons.

The Hawks controlled the ball for nearly the rest of the half, moving it incrementally down field. Santucci carried the ball over the line for a touchdown with 22 seconds left in the game. The two-point conversion was good, bringing the score to 26-29, Hawks.

“I am pleased with everybody,” Rocha said. “We played well, but when some of your dudes go out the other dudes have to step up. Inexperience kills you. But that’s football and now these guys got experience.”

Monroe next heads out on the road to face Brentsville District High School Friday at 7 p.m. The next home match is scheduled for Saturday, March 20, at noon against Warren County High School.

It’s a rather crappie time to fish. That’s because if you toss a small shiner out on most any lake or pond, you’ll catch a crappie.