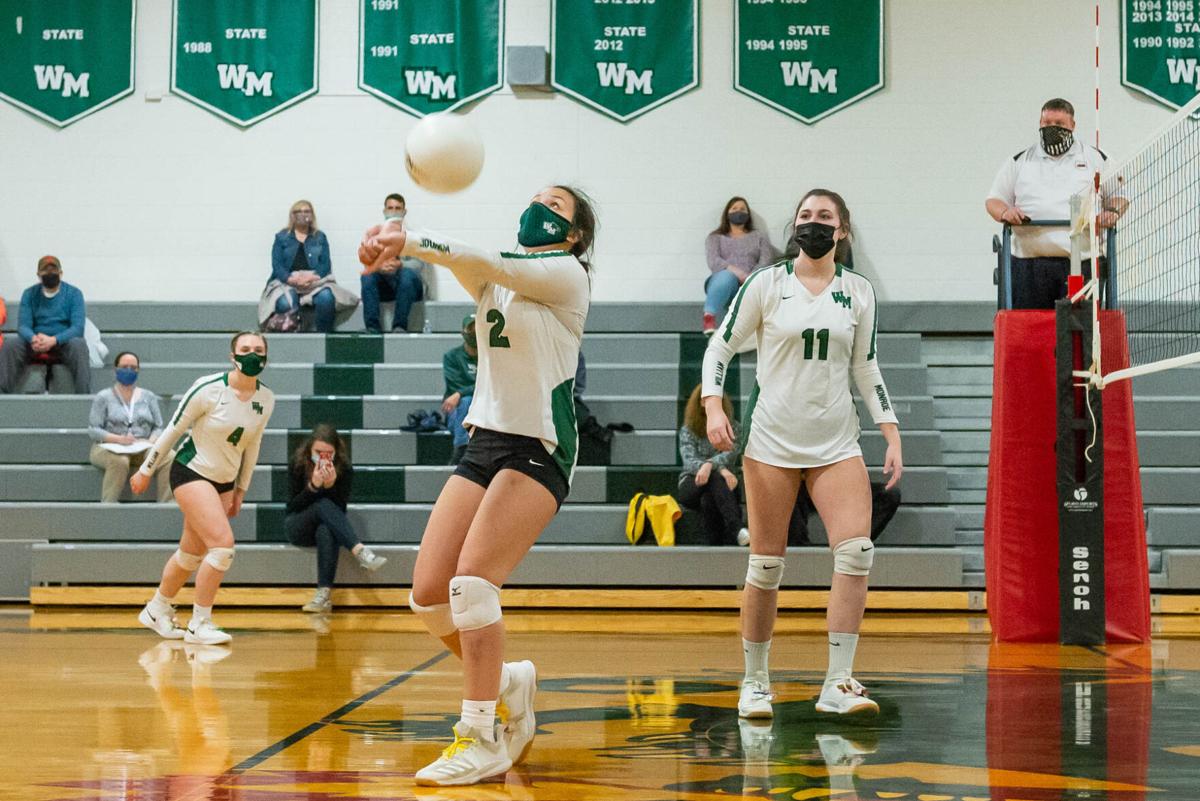 Alex Sharff bumps the ball as Savannah Meade gets ready to spike it. 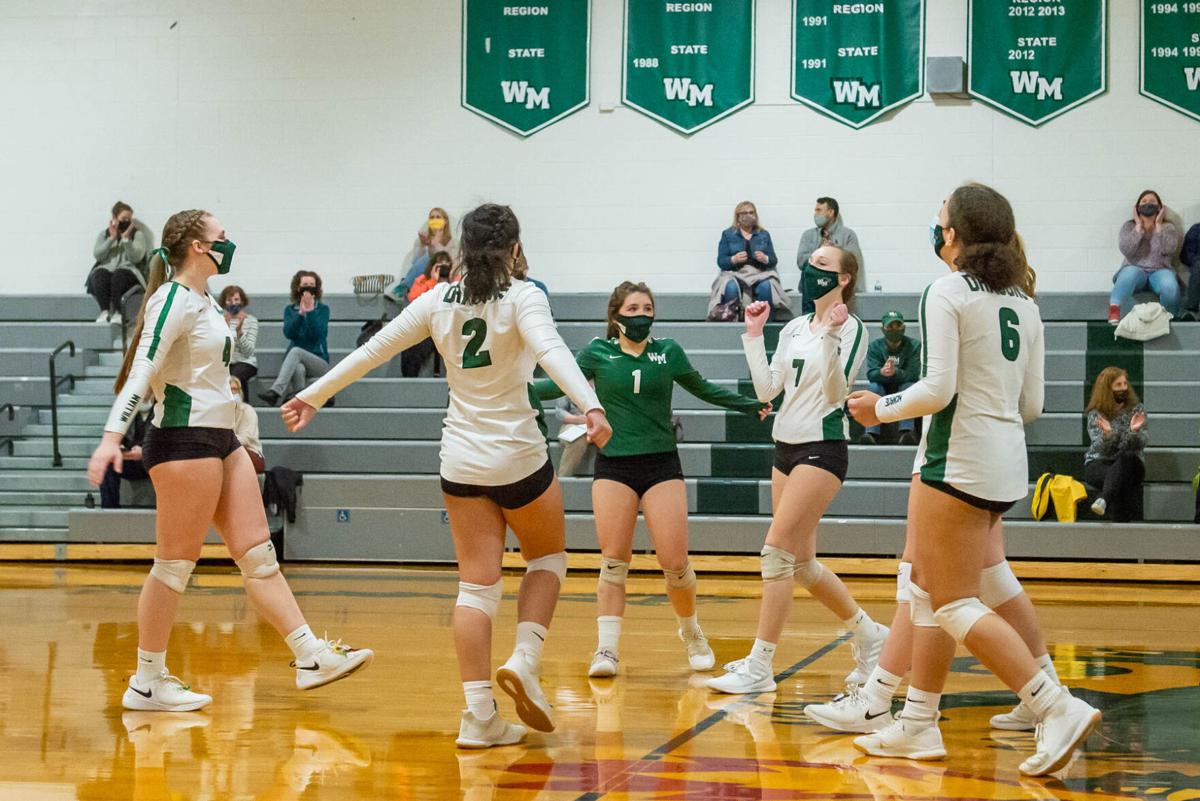 The Dragons celebrate another score during last week’s victory over Warren County.

The varsity game’s first match kicked off with an early two-point lead by the Wildcats but was quickly tied up as Dragon junior Mara Woolford slammed two points in a row and then served up two more. Wildcat junior Karleigh Crabill served up another point to tie the score 4-4 and then Dragon sophomore Ella Weaver served up a volley that ended in Weaver tipping the ball over the net for another point that was soon matched by the Wildcats, bringing the score to 5-5.

Alvarez took the serving position and served up three more points in quick succession—which the Wildcats failed to block—bringing the score to 12-9, Dragons, at the time out.

Dragon junior Alex Sharff served up another point, keeping the tight lead for the Dragons, and an exceptionally long volley by Wildcat sophomore Natalya Carter saw Woolford attempting three kill shots in a row—one of which hit the gym ceiling but was saved from going out of bounds—before her final spike was blocked by the Wildcats defenders, bringing the score to 14-10, Dragons.

Woolford served the next two volleys and then the Wildcats got a chance to close the gap. One particularly strong serve by Shortridge ended in a side out that nearly hit several parents in the stands, and three serves by Wildcats sophomore Faryn Gorham saw Shortridge and Alvarez scrambling to keep the ball in bounds, bringing the score to 17-17.

Gorham served up three more points for the Wildcats, one of which clobbered Dragon senior Lexi Clark in the face and another which sent Clark diving to the floor. Dragons coach Leah Wimmer called a time out as the score hit 17-20, Wildcats.

After the time out, Gorham served up one more, which Clark ducked out of the way of for an out, giving the ball to the Dragons. Alvarez again came up to serve and quickly tied up the score at 21-21 as the intensity of the game ramped up and players darted in every direction. Alvarez served three more volleys to bring the Dragons ahead again, but Wildcats sophomore Atori Lane managed a kill shot that gave her the next serve; a furious volley saw Woolford returning the serve, Shortridge setting up Woolford for kill shots twice that were returned and finally Woolford managing the shot, bringing the score to 24-22, Dragons.

The Wildcats would get in one more point before a long volley ended with Woolford tipping the ball just over the net; the Wildcat defense obviously expected another spike and were not prepared—two players dove to the floor to try and save the shot, but the ball hit the floor and the Dragon spectators erupted in cheers for the 25-23 win in match one.

Match two began with Sharff serving and setting up Woolford and Weaver for a series of great offensive hits that gave the Dragons an early four-point lead. The Wildcats seemed disorganized and missed several shots—they would not be in the lead again for the remainder of the night.

“We changed our defense and we changed the type of rotations we run, and that seemed to help a lot,” head coach Leah Wimmer said after the game. “I think they all gelled really well and they really embraced the new defense that we went through … so that’s what we did in practice the past couple days, just tried new defenses to be able to put different people in different spots just in case so everyone’s comfortable in every position in case you have to switch anybody out.”

In the second match, senior McKenna Donohue traded in to keep the Dragons in the lead with a series of her signature powerful serves.

Woolford was on fire for offense, spiking shot after shot into every area of the Wildcats court and keeping the Dragons in the lead as the score reached 12-7 at the time out.

Alvarez again rotated into the serving position, giving the Dragons three more points before the Wildcats got a chance to shorten their lead. Soon Donohue was trading back in to serve, starting a long volley that saw Woolford again nailing the return shots.

Waller gained the Wildcats two more points, before an out-of-bounds ball gave the Dragons once again control of the ball, netting three more points in quick succession to bring the score to 21-16, Dragons.

The action in set two was intense, as one kill shot by Woolford was saved by a Wildcat defender only to shoot up to the ceiling and bounce off a lighting fixture before flying out of bounds. The next volley was all over the place and ended in a wild shot near the scorekeeper’s table which didn’t make it over the net. Woolford came up to serve and though the Wildcats managed to bring their total up to 18 points, a final two volleys saw Woolford nearly doing the splits to block a kill shot, Sharff setting up Weaver and finally Sharff setting up freshman Morgan Pursel for the kill shot that won the Dragons the second set, 25-18.

“In the past we were getting burned in front of the 10-foot line on tips off the block, so we just rearranged how we were going to put people in the back, and we worked on their range yesterday at practice—like how far they can reach and being aggressive on the ball and did a bunch of drills that way,” Wimmer said. “I think they all did really well tonight and I’m really proud of them.”

In set three, the Dragons really hit their cooperative groove as they took an early lead, with Sharff serving up volleys that netted five points in a row and spectacular kill shots from Woolford and Sharff, bringing the score to 5-2, Dragons.

The Wildcats clawed back with three more points as one particularly intense volley saw Crabill serving, Meade diving to return, Weaver darting to return the ball after it bounced back off the net, and a back and forth by Waller and Woolford before Sharff set up hits for Woolford, Weaver and finally Meade before the ball flew out of bounds, bringing the score to 7-4, Dragons.

The Dragons maintained their lead as the energy continued to increase in the gym. Alvarez once again took the serving position, quickly racking up point after point as she served nine volleys in a row. Woolford was all over the court, hitting kill shots and returning attempts by the Wildcats to bring the score to 20-7, Dragons, before Alvarez’s tenth serve hit the net and gave the serve to the Wildcats.

Junior Chloe Davis traded in on defense and earned the Dragons its 22 point as Sharff served up two more volleys. The Wildcats couldn’t stop the Dragon energy, and the final point saw Woolford serving, Waller attempting to return and Wildcat senior Alexis Pitsenbarger diving to the floor in a failed attempt to stop the game-winning point. The game ended at 25-10, Dragons.

Sharff had 14 assists on the night and Shortridge had 12. Woolford had 11 kills, Weaver had five and Alvarez had two aces.

The Dragons have away games this week against Brentsville and Manassas Park and their last home game against George Mason will be on Monday, March 29, at 7 p.m.

Two Dragon teams showed up for the home game last Tuesday against Eastern View High School—actually it was the same athletes, but over the two…

691 days. There were 691 days between the last William Monroe High School Lady Dragons soccer game in 2019 to their first one against Eastern …

The coronavirus pandemic hit the United States—and specifically the Blue Ridge Health District—hard last year right around mid-March, which is…

Rocha steps down as coach

Jon Rocha has poured his heart and soul into to the William Monroe football program, both as a player and a coach.

OUTDOORS: Virginia is for walleyes

Alex Sharff bumps the ball as Savannah Meade gets ready to spike it.

The Dragons celebrate another score during last week’s victory over Warren County.