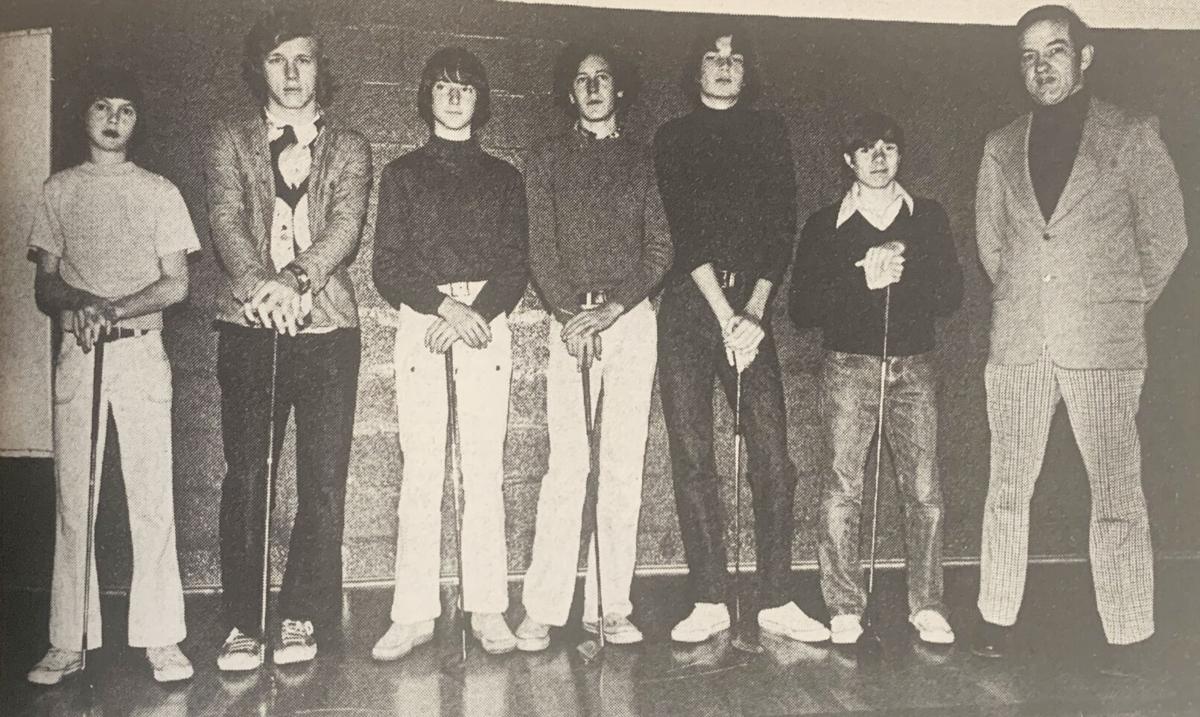 Morris competed with the high school golf team as a teenager. Above, left to right, golf team members Rickie Wells, Earnie Pratt, George Teed, Ronnie Morris, Glenn Taylor and Coach Don Judy after a 1977 match in which Morris finished with a low score of 42. 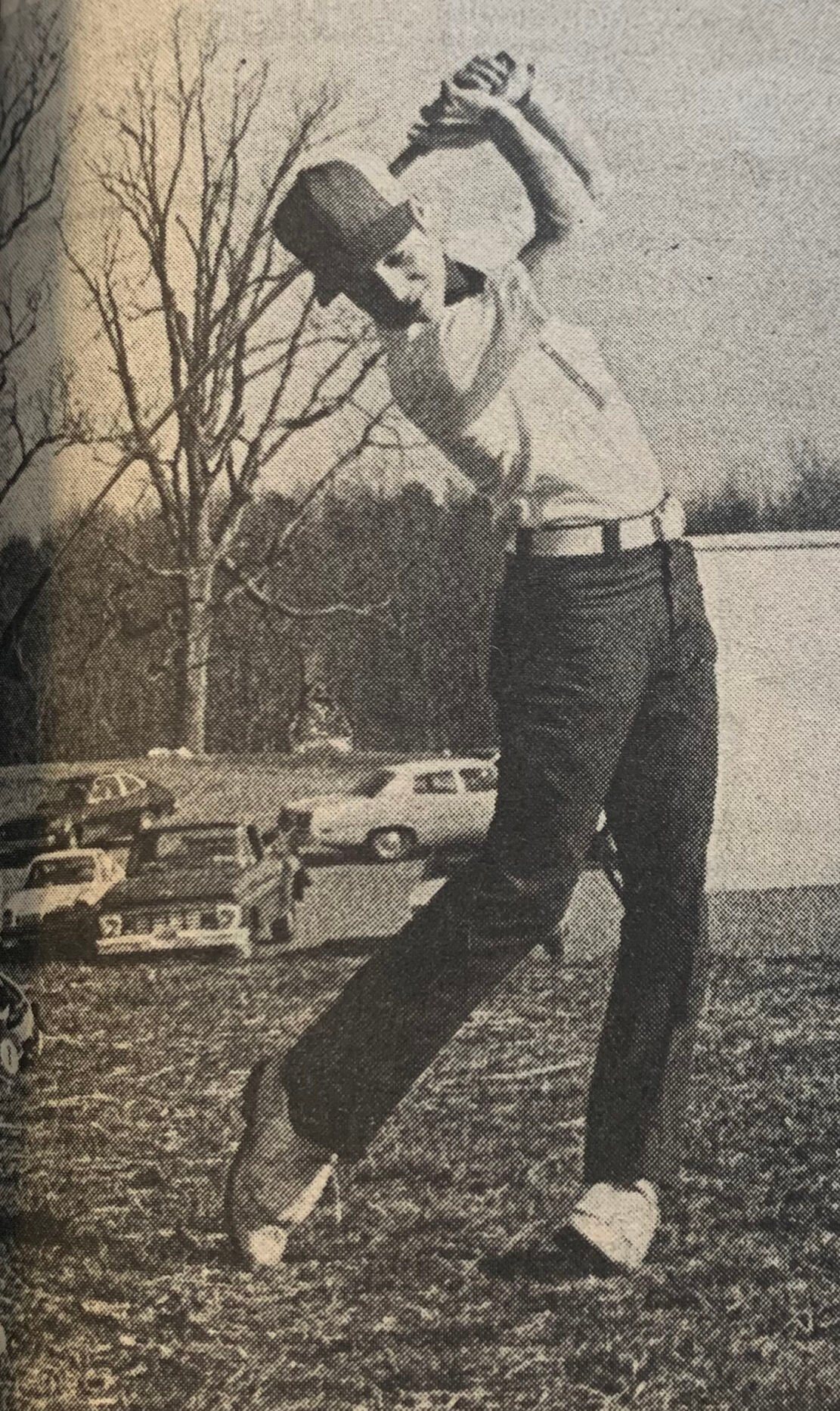 “My dad’s been a member here at Greene Hills Club since the day it opened and I would just come up here messing around,” Morris said. “I really didn’t play golf; I just came to spend time with my dad. (The high school) knew I hung around here and they wanted to start a golf team.”

Morris recalls his name called over the intercom to visit the guidance counselor when he was in ninth grade.

“I had no idea why,” he said. “But, they wanted to start a golf team and wanted to know if I wanted to play golf. So that’s how I started playing golf.”

At that time golf season began in March. In recent history, golf has teed off in August, but this year’s team is expected to hold its first matchup on March 1 against Eastern View at the Culpeper Country Club. Due to the coronavirus pandemic, the Virginia High School League (VHSL) postponed fall sports until late February and March.

Morris isn’t sure if he’s the longest-serving golf coach in the Northwestern District, but he does know he has loved his job from day one.

“I definitely like it; I wouldn’t do it for so long if I didn’t like it,” he said. “I work here at Greene Hills Country Club and up until this year we’ve always done a junior clinic, so I’m usually working with these kids from the time they’re 7, 8, 9 years old and up and the neat thing is I get to watch them get better,” Morris said. “My son played on the team back when I first started and now my grandson is coming along.”

Morris said his wife doesn’t play golf, and his daughter didn’t like it herself, so it was just himself and his son, Shannon Morris, on the course.

“We got to spend time together,” he said. “Hanging out so much you get close to each other.”

He added that his grandson, Christopher Salyers, who is a freshman this year at William Monroe, has had a heart for the game since he was young.

The trio spends many Sunday mornings on the course in Stanardsville.

In the 22 years that Morris has been the Dragons coach he’s only had one losing season. In the six years that William Monroe was in the Bull Run District, Morris said the team only lost one match. His squad took the state title in 2012 and lost it only by two strokes in 2013.

Morris said having a player go on to play in college and beyond isn’t his ultimate goal, but he enjoys seeing them succeed.

“It’s a feeling that’s hard to describe because you know when you start working with them when they’re such a young age and they want to be good,” he said. “And it’s exciting to watch some of them reach that goal and be able to play at the next level. Hannah just came to my clinic one year and I watched her hit balls for like five minutes and I said, ‘I’m going to need you come out for the golf team’—even though she hadn’t played golf before. In four years she went from not playing golf to being a college-level golfer.”

“His success is directly related to him being able to get to know the kids as they begin to play the game of golf at Greene Hills Club,” Collier said. “He has been able to maintain a steady flow of kids that come up through the youth clinics at Greene Hills and in turn continue to play in high school and beyond. Coach Morris being the assistant at Greene Hills has been invaluable to the team over the years. It gives our kids access to quality coaching on everything from technique to course management—that’s hard to find in a high school setting.”

Morris said golf is a game you can enjoy for your whole life.

“If I can get them involved in it early in their lives and they continue to do it, they might become members later,” he said. “The coolest thing about it, one of the kids on my first golf team, he is a pro at a club in Virginia Beach and another that was on the state championship team is an assistant there. And another one from the second team I coached, he’s one of the pros at Spring Creek Golf Club. It’s so satisfying to know that they not only liked the game, but were able to advance their careers with it.”

Morris said he hopes to continue coaching for at least the next four years while his grandson is on the team.

“And then there’s another young man coming along that I like a lot and then I’ll stay for the two years after my grandson graduates,” he said. “So it’ll be close to a full 30 years of coaching; if my health stays.”

Staying this long wasn’t something Morris planned to do.

“I figured I’d make it through my son’s years and call it quits,” he said. “But like I said, I work with the juniors and we do the junior clinic and I’ve had so many good kids. That’s the main thing I enjoyed the most—the kids.”

Morris said his favorite part of golf is it’s just you against the golf course, not really you against the other person. He believes golf has played a role in the positive futures of his players.

Morris is grateful the team is getting the chance to play this year.

“This bunch of seniors that is on the team this year, if they make it back to states they’ll have made it all four years,” Morris said.

While William Monroe is a Class 3 school, Morris said they regularly play Class 4 schools, such as Albemarle County, annually. The distinction is based on the size of the school.

“We like it when we play the bigger schools,” he said. “Doing the same thing doesn’t make you better.”

“What makes this course tough is it has small greens and good rough around the greens, so you have to be pretty accurate here to the greens,” he said. “A lot of courses have much bigger greens than we have. Greene Hills has been fantastic with all the schools and letting the juniors play golf here. The board and the staff and everything have been really good, like Mike (the golf pro) helping the kids out when they need help with their swings.”

Morris said he knows golf isn’t for everyone since one of his children loved it while the other didn’t.

“You don’t force it on them; the only thing you can do is give them the opportunity to play golf,” he said. “They can take the junior clinic here or get them involved in The First Tee—anything that gets them involved in it.”

Usually the clinic lasts about six weeks and is held a few weeks after school lets out, Morris said, and he hopes to be able to hold it this year.

“It’s a fun game,” Morris said. “I’ve heard people say, ‘why would you want to go out in the middle of a field and hit a ball?’ Don’t knock it until you try it. It’s a challenging game, but it’s a game that anyone can play. How you will play isn’t the point, the point is to get out here. The object is to be out here and enjoy yourself, enjoy the outdoors and the people that you meet. This place has so many great members.”

Morris, 58, moved to Greene County when he was 13 years old, as his parents were originally from Greene.

Morris said if given the chance he’d like to say thank you to his former players for being hard workers and such good people.

The first home golf match is currently scheduled for 2:30 p.m. on Monday, March 8, against Brentsville District High School. More matches are expected to be scheduled, though dates may change due to coronavirus protocols. Visit www.northwesterndistrictva.org for the most up-to-date game calendar.

It’s a rather crappie time to fish. That’s because if you toss a small shiner out on most any lake or pond, you’ll catch a crappie.

Morris competed with the high school golf team as a teenager. Above, left to right, golf team members Rickie Wells, Earnie Pratt, George Teed, Ronnie Morris, Glenn Taylor and Coach Don Judy after a 1977 match in which Morris finished with a low score of 42.