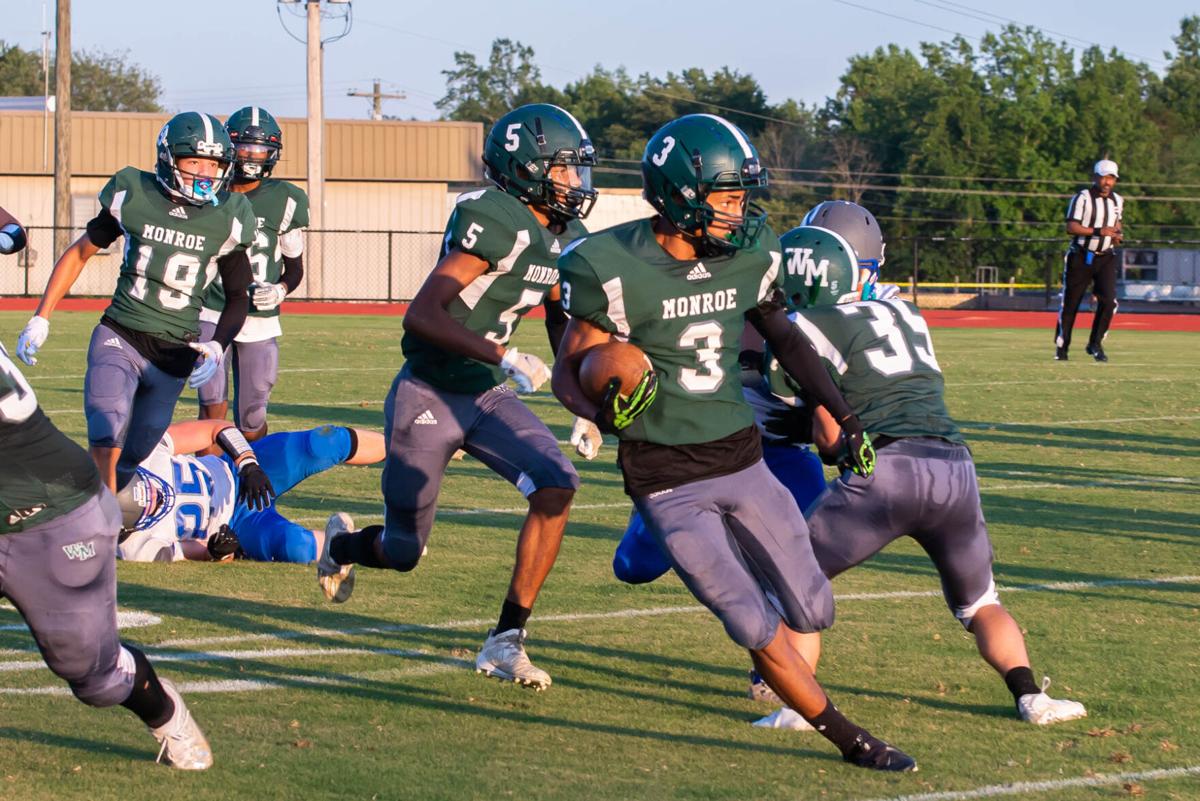 Daelan Powell-Jackson breaks free during the opening kickoff to return for a Monroe touchdown. 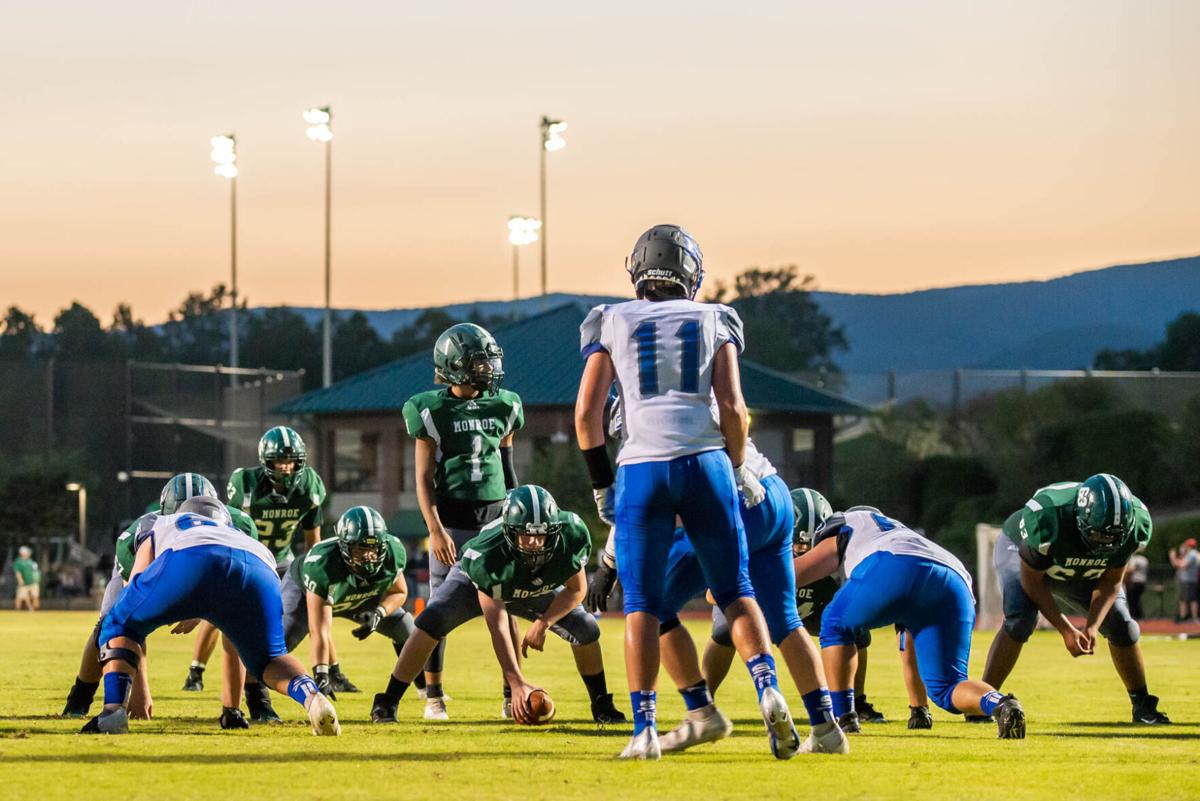 Football returned to Greene County last week as Davien Griffieth lines up behind center during the Dragons’ home opener in Stanardsville. 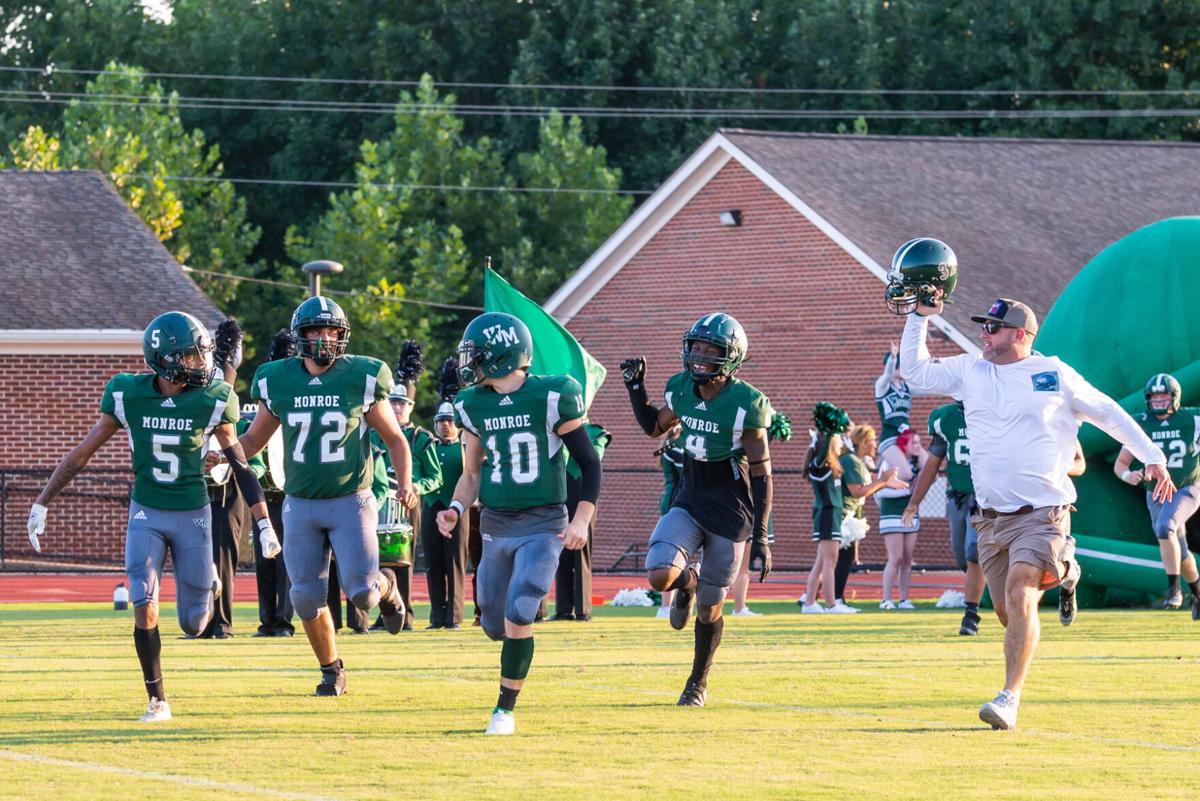 The Dragons run onto the field with Aaron Johnson carrying the #32 helmet in memory of his son, Josh Johnson, who passed away this summer.

The William Monroe High School Dragons jump-started the first home game of the season as junior running back Daelan Powell-Jackson returned the opening kickoff from the Spotswood High School Trailblazers, sprinting the length of the field for a touchdown just 30 seconds into the first quarter. Powell-Jackson, along with other teammates in the end zone, dropped to the grass to make a “snow angel” in honor of teammate Josh Johnson, who passed away in June—it was Johnson’s signature victory move.

“We just clicked as a unit … we all just fit together and we have that family bond, and Josh (Johnson) really brought us more together and we just came out and executed,” said sophomore quarterback Davien Griffieth, who began his first season on the varsity team this fall. “On that first touchdown and the snow angels—that meant so much to us. It was a statement.”

With the extra point from the conversion, the Dragons were 7-0 for a full minute before the Trailblazers scored their first touchdown of the night, bringing the score to 7-6, Dragons, where it would stay for the remainder of the quarter.

“Spotswood’s a good football team—they did some things that kind of took us out of our rhythm; (but) we stuck together as a team, we played together, we didn’t fold … and we were able to regroup and answer, so I’m proud of our guys tonight,” said Dragons head coach Mitchell Morris. It was his first game since taking over the position at the end of last season after a rain-out the previous weekend at Stuarts Draft.

Dragon senior running back Troy Jones took charge at the beginning of the second quarter, carrying the ball to a second and third down before scoring his first touchdown of the night and bringing the score to 13-6. Senior kicker Kameron Ward made good on the conversion with nine minutes to go in the quarter, bringing the score to 14-6.

Trailblazer senior running back Tre Holsapple was a force to be reckoned with in the second quarter, returning the kickoff and earning three downs before Jones tackled him at the 43-yard line with just over six minutes left in the quarter. The Dragon defense would keep Holsapple from the end zone, but he continued to harry the defensive line after halftime, finally passing to teammate Donald Lubin, who would earn the Trailblazers another touchdown with six minutes left in the third quarter and bringing the score to 14-12, Dragons.

After a brief time out, the Trailblazers went for a two-point conversion, tying up the score at 14-14 halfway through the third quarter.

The Dragons began to feel the heat at the end of the third quarter as sophomore defensive back Larry Smith batted down a pass from the Trailblazers, dropping to the ground with a leg cramp as the coaches hurried over to make sure he was not hurt. Less than a minute later, the Trailblazers scored a third touchdown with 2:35 left in the quarter, with kicker William Blackwell connecting on the conversion to bring the Trailblazers ahead, 14-21.

Dragon senior wide receiver Shea Jeffers returned the kickoff, helping the Dragons fight their way toward the end zone but ending the third quarter just 18 yards from the goal as the clock ran out. At the start of the fourth quarter, Jones earned the fourth down and Powell-Jackson landed an impressive catch in the end zone for his second touchdown of the night. Ward made good on the conversion to tie up the score at 21.

“After halftime, we went down by seven and we just rallied,” Jeffers said. “We were driving to the end zone and Davien (Griffieth) threw me a 35-yard fade ball and I went up and grabbed it … that was just a surreal play. Of course, we had Josh in the back of our minds the entire time. … We all feel like he was still out there on the field with us. We’re a very inspired team and I think that’s going to get us far.”

“I think we came through when we needed to on offense,” said Hoffman, who’s looking forward to a full season after last year’s early end to the season due to COVID-19.

With four minutes to go, Jones was determined to keep the Dragons ahead. He intercepted a pass, earning first, second and third downs as the clock ticked down the final minutes of the game. Finally at the three-yard line, junior running back Justin Williams got the carry, falling just shy of the end zone for a fourth down at the one-yard line. After a brief time out, Jones took the final touchdown with less than two minutes left in the game, bringing the score to 34-21, Dragons.

The Trailblazers ran out of time before they could regain control of the ball.

Two things coaches want from their players, regardless of sport, is effort and attitude. William Monroe dual-sport athlete Troy Jones epitomizes both of those characteristics.

The Bambino Buddy-Ball Bash will be held at the Greene County Youth Center in Ruckersville as a way to introduce Buddy-Ball for students ages 5-22 with diverse abilities.

The Blue Ridge quarterback shook off the early incompletions and got things rolling, completing 11 of his next 16 passes for 345 yards and six touchdowns to lead the Barons to a 50-13 victory at Alumni Field. Blue Ridge (1-1) bounced back from last week’s season-opening loss to Nansemond-Suffolk with a convincing victory.

Thursday, Aug. 26 was a great night of volleyball for the William Monroe High School Lady Dragons, who defeated the Madison County Mountaineer…

Dragon golf team wins one, loses 2 after matches were postponed

With only a five-squad team, the William Monroe High School Dragons golf team did not lie down in defeat on Monday, Aug. 23.

Daelan Powell-Jackson breaks free during the opening kickoff to return for a Monroe touchdown.

Football returned to Greene County last week as Davien Griffieth lines up behind center during the Dragons’ home opener in Stanardsville.

The Dragons run onto the field with Aaron Johnson carrying the #32 helmet in memory of his son, Josh Johnson, who passed away this summer.