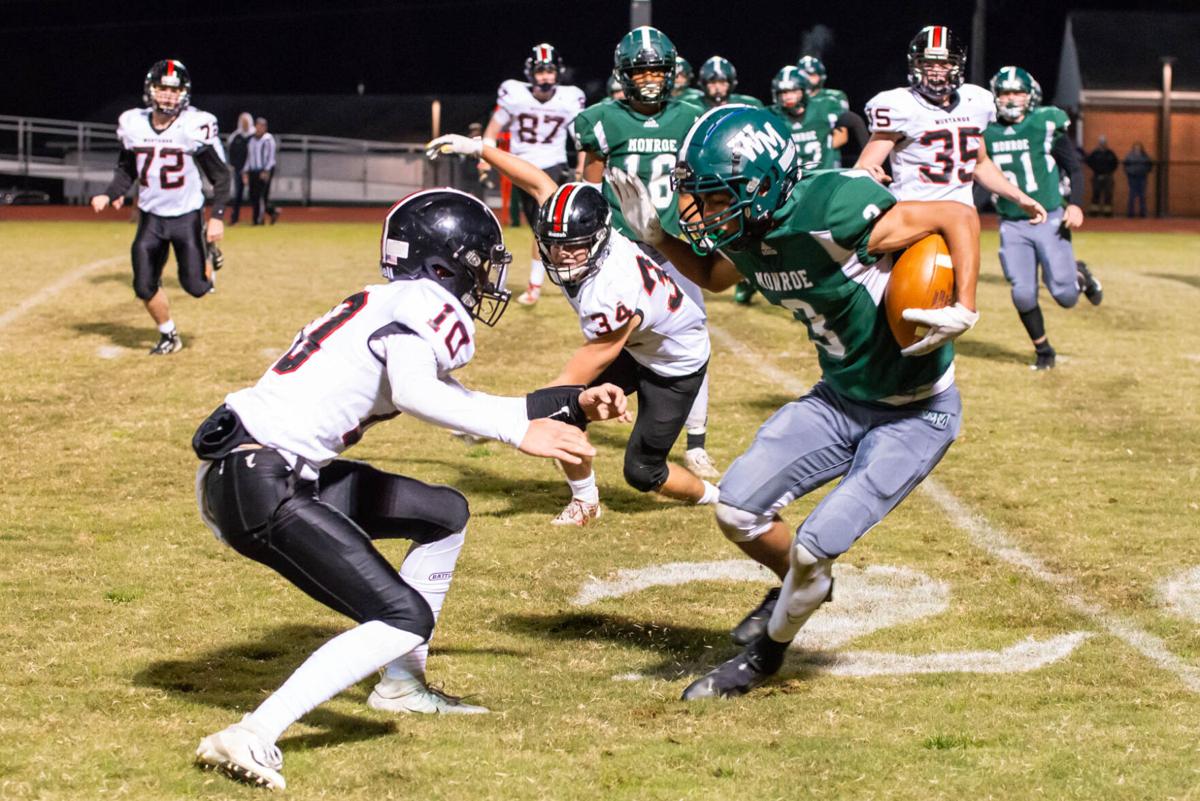 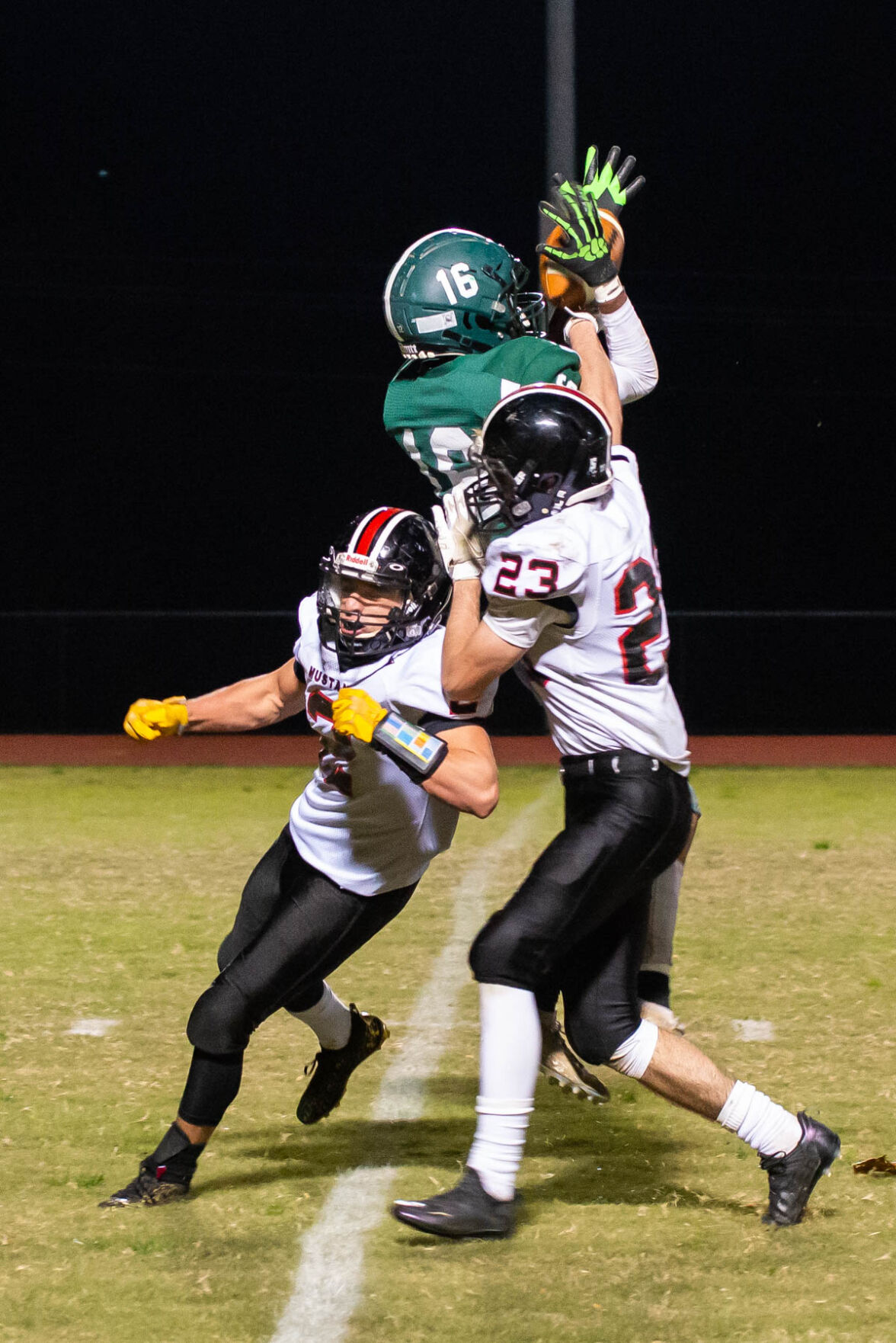 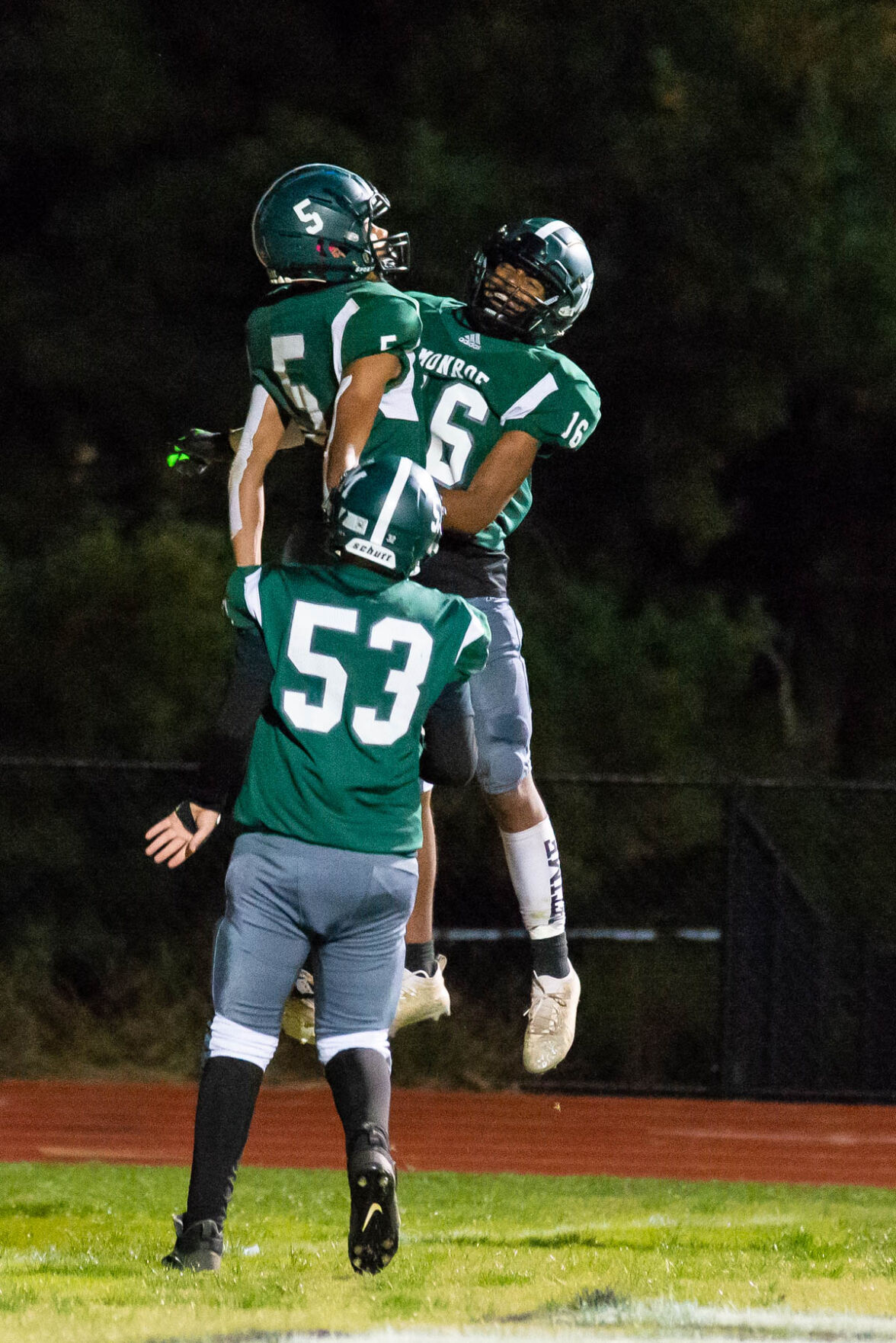 Above, the Dragons celebrate after scoring during the final game of the season.

The Meridian Mustangs scored 26 unanswered points in the second half Nov. 5 en route to a win over the William Monroe High School Dragons, 48-17. The Dragons were wracked by penalties, receiving multiple penalties on a single play more than once. Junior linebacker Daelan Powell-Jackson got two personal fouls and was ejected from the game in the final two minutes for a disappointing end to the regular season for both teams.

Kameron Ward, senior kicker for the Dragons, converted a field goal with 3:13 left in the first quarter to give the Dragons an early 3-0 lead. Meridian answered with a touchdown two minutes later and the extra point was good, taking a 7-3 lead over the Dragons. Powell-Jackson returned the kickoff to the 40-yard line and fumbled but recovered to maintain possession. The Mustangs intercepted a Monroe pass with just 18 seconds left on the clock, leaving the Mustangs ahead and in possession at the beginning of the second quarter.

The second quarter began with a flurry of interceptions: junior linebacker Tanner Williams intercepted the ball two minutes in, followed by a Mustangs interception 90 seconds later with a run for a touchdown, which was called back to the 40-yard line due to a penalty against the Mustangs. A minute later, the Mustangs made good on the score to stretch the lead to 14-3 with 7:12 left in the half—the extra point was good.

Seconds later, Powell-Jackson fumbled the ball at the 10-yard line on the kickoff, but recovered and ran the length of the field for a touchdown. The extra point from Ward was good, closing the gap to 14-10, Mustangs.

A flurry of activity saw a personal foul and another penalty against the Dragons near the end of the half. The Mustangs scored again with 2:30 to go, stretching their lead to 21-10 with the extra point. With 1:34 left before halftime, Dragon quarterback Davien Griffieth passed to Powell-Jackson. The Dragons got an offsides penalty 20 seconds later but Griffieth scrambled for yardage with 44 seconds to go, despite another offsides penalty. With 25 seconds left, Dragon junior Deacon Jackson caught a completed pass and a scramble by Griffieth brought the Dragons to the 2-yard line.

With 13 seconds left on the clock, the Dragons cashed in on a great two-minute drill when senior Troy Jones found paydirt; Ward’s extra point was good with 10 seconds to halftime, bringing the score to 21-17, Mustangs. Senior Dragon fullback Bryce Hoffman would intercept a pass and push to within the 5-yard line before being brought down at the buzzer for halftime.

“In the first half, we were able to get their offense behind the chains a couple of times, which resulted in some stops,” said Dragons Head Coach Mitchell Morris. “The second half, we weren’t able to get stops. They’re a team with a lot of seniors and I think their maturity and leadership showed up in the second half.”

The William Monroe Marching Dragons showcased their award-winning tribute to 50 years of marching band history with their final home game show during halftime.

Senior Shea Jeffers returned the kickoff for the Dragons, but the offense failed to convert and had to punt the ball to get out of Mustang territory. The score remained unchanged in the third quarter as the Dragons continued to lose steam.

Less than a minute into the fourth quarter, the Mustangs scored yet another touchdown, bringing the score to 41-17, Mustangs. Jones returned the kickoff for the Dragons, bringing the ball to the 45-yard line. With 9:30 left on the clock, Powell-Jackson fumbled and the Mustangs took possession of the ball. With eight minutes to go, Powell-Jackson was given a personal foul. At six minutes, the Mustangs scored once more to bring their lead to 48-17. With 4:14 on the clock, the Dragons were given another penalty.

With four minutes to go, the Dragons completed a pass to Jackson and came within 10 yards of the goal, but a pass was incomplete to Powell-Jackson. With another run of penalties in the final minutes of the game, Powell-Jackson was ejected and the clock ran out from there.

“I think the thing that really changed in the second half is (Meridian) executed a lot better than we did,” Morris said after the game. “We had several drives ended by untimely penalties and mental errors. … Daelan was ejected for having two personal (fouls) in one play; he had a physical altercation with a player and then a comment to the ref that got him two flags.”

During the final minutes of the game, Head Coach Mitchell Morris was going down the line hugging players who were watching the action from the sidelines.

“I was hugging all the seniors,” Morris said. “I told them I was proud of them and thanked them for everything they gave me this year. Not easy to have a change in the head coach position your senior year, and we had some guys buy in from day one.”

Staff writer and office administrator for the Greene County Record since 2019.

Trio of WM harriers give their all at state XC meet

Above, the Dragons celebrate after scoring during the final game of the season.