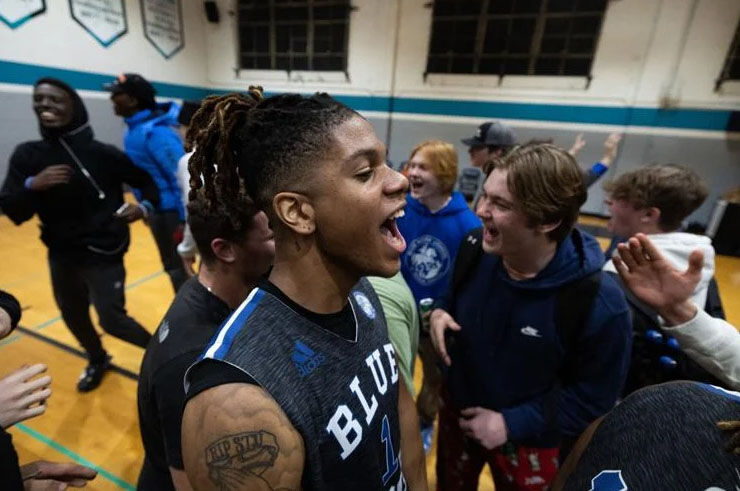 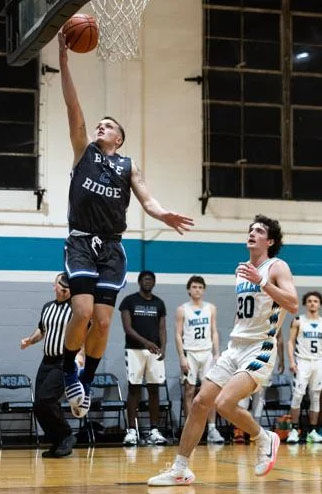 Blue Ridge's Camden Brewer (2) goes for a lay up.

G. BEIGHTS For The Daily Progress

Blue Ridge and the Miller School both rode into Friday night’s matchup looking to start a new winning streak.

Both the Barons and Mavericks picked up convincing wins on Tuesday to snap two-game slides. Miller rolled past Life Christian Academy, while Blue Ridge dispatched Virginia Episcopal to set up Friday’s showdown.

In the end, it was the Barons who went back to St. George with a two-game winning streak thanks in large part to a great defensive play from Camden Brewer.

Brewer blocked Jordan Horne’s potential game-winning layup as time expired and Blue Ridge hung on for a hard-fought 50-49 win over the Mavericks in overtime.

“This is a game we really wanted. We really wanted to make a statement win,” Brewer said. “We’ve now won two of our last three games so we feel like we haven’t reached our full potential. We needed a game like this one where we really had to rally at the end.”

Brewer, Kamren Martin and Shanon Simango each played key roles in the win for Blue Ridge (11-4).

“We have a lot of respect for Miller School,” Blue Ridge head coach Cade Lemcke said. “They are one of the best teams in the state, regardless of division, this year and we know every time we play them it’s going to be a battle, the crowds are going to be great and it’s going to go for 32 minutes. We didn’t know it was going to be 36 minutes, that extra four minutes of overtime was tremendous, both teams left it out on the floor.”

“They have a bunch of seniors on their team so we knew they would put up a fight, we only have two seniors and I’m so proud of my underclassmen for playing as hard as they did. They played like they were seniors and left it all out there.”

After 25 years in the saddle of the Montpelier Hunt Races, Charlie Seilheimer stepped down as its chairman, effective Dec. 31, 2022.

It’s been quite a busy week for Ella Weaver and her William Monroe teammates.

The William Monroe Boys Basketball Team jingled all the way to a championship in the Goochland Holiday invitational! The Dragons started out t…

After 55 years of playing golf, Tim Alley finally scored a Hole N One on Hole #6 at the Greene Hills Club on Friday, December 30th. Starting h…

Under the leadership of Lisa Placa, the Greene Hills LGA once again sponsored a food drive to help a local volunteer organization, FEEDING GRE…

Blue Ridge's Camden Brewer (2) goes for a lay up.