According to the maps released last Tuesday, Madison, Greene and half of Orange County will be in the new 62nd District of the Virginia House of Delegates. Previously, Orange and Madison were located in the 30th District with part of Culpeper (represented by Del. Nick Freitas), while Greene was part of the 58th District (represented by Del. Rob Bell) which included parts of Albemarle, Fluvanna and Rockingham counties. The new 62nd District also includes part of Culpeper. Orange County is split along Route 522, Route 20 and Rapidan Road, with the western half of the county in the 62nd District, with the eastern portion of the county in the 63rd District with half of Spotsylvania County. All of Greene and Madison counties are included within the 62nd House district.

In the Virginia Senate, all of Orange, Madison and Greene are now part of the 28th District, which includes all of Culpeper and parts of Fauquier and Spotsylvania counties.

At the federal level, the three neighboring counties all now are in the 7th Congressional District, currently represented by Rep. Abigail Spanberger. The district, which had been aligned vertically west of Richmond from Nottoway County in the south to Culpeper County in the north, now skews more horizontal, from Greene County in the west to Caroline and King George counties to the east. It also includes Culpeper, Spotsylvania, Stafford and part of Prince William County.

Greene and Madison had been part of the 5th Congressional District, represented by Rep. Bob Good. The 5th District stretched from the North Carolina border north, skirting Roanoke and Lynchburg along its western borders, including Charlottesville and much of the eastern portion of Shenandoah National Park and beyond Interstate 66 into northern Virginia.

Rep. Spanberger has since announced she will seek reelection to a third Congressional term in the reconfigured 7th District.

The maps are effective immediately and will affect all regularly scheduled primaries and general elections moving forward.

The court took over control of the state’s redistricting process after a new commission of citizens and legislators failed to come up with maps for the state’s legislative and congressional districts, a messy process that was bogged down by partisan politics.

The court issued its preliminary maps earlier this month, which were the product of amicable debate between the justices’ two experts—Bernard Grofman, nominated by Democratic legislators, and Sean Trende, nominated by Republican lawmakers.

“We drew maps which did not unduly favor either party. These maps came about as part of a partisan and incumbency blind process based on good government map making,” Trende and Grofman wrote in a 63-page memo outlining some of the many changes made between the draft and final versions of the maps.

Trende and Grofman said public comment on their first drafts helped drive the changes, in particular “frustration” about the removal of the 7th District from the Richmond area. The experts said they could not keep a district akin to the current 7th without unwelcome ramifications for other districts, such as splitting the Shenandoah Valley.

Grofman and Trende said that the growth in Northern Virginia demanded that they create an additional district there, the new 7th. They described the consolidation of the western Henrico and Chesterfield suburbs into the 1st District as an effort to at least keep those communities with similar interests together.

“Although we were unable to identify a global resolution to this complaint that would not set off a cascade of secondary problems,” the experts wrote, “we did feel it incumbent upon ourselves to pay extra care to specific complaints in this region.

“We have identified a series of changes that do not give these residents what they are ultimately seeking, but that do address some of the valid points that they raise regarding communities of interest.”

In the first draft of the court’s redistricting maps, about half of the state’s delegates and senators faced the prospect of either running against a colleague, moving or retiring.

In the memo they released with the final maps, the court’s experts said the “severe” effect of ignoring incumbents when drawing the legislative maps was proof of the “redistricting process working as intended.”

The experts argued that failing to protect incumbents by simply remaining ignorant about where they lived allowed Grofman and Trende to instead focus on keeping localities and communities together.

Notably, they said they decided in consultation with the court’s justices to proceed without addressing the issue of paired incumbents.

Protecting incumbents “would seem to be at odds with the overall redistricting scheme enacted by Virginia voters,” they wrote, referring to the 2020 statewide referendum in which Virginians backed the idea of a redistricting commission.

“Having established compact districts that respect communities of interest, however, our hope is that future redistricting utilizing the same criteria will be less severe.” 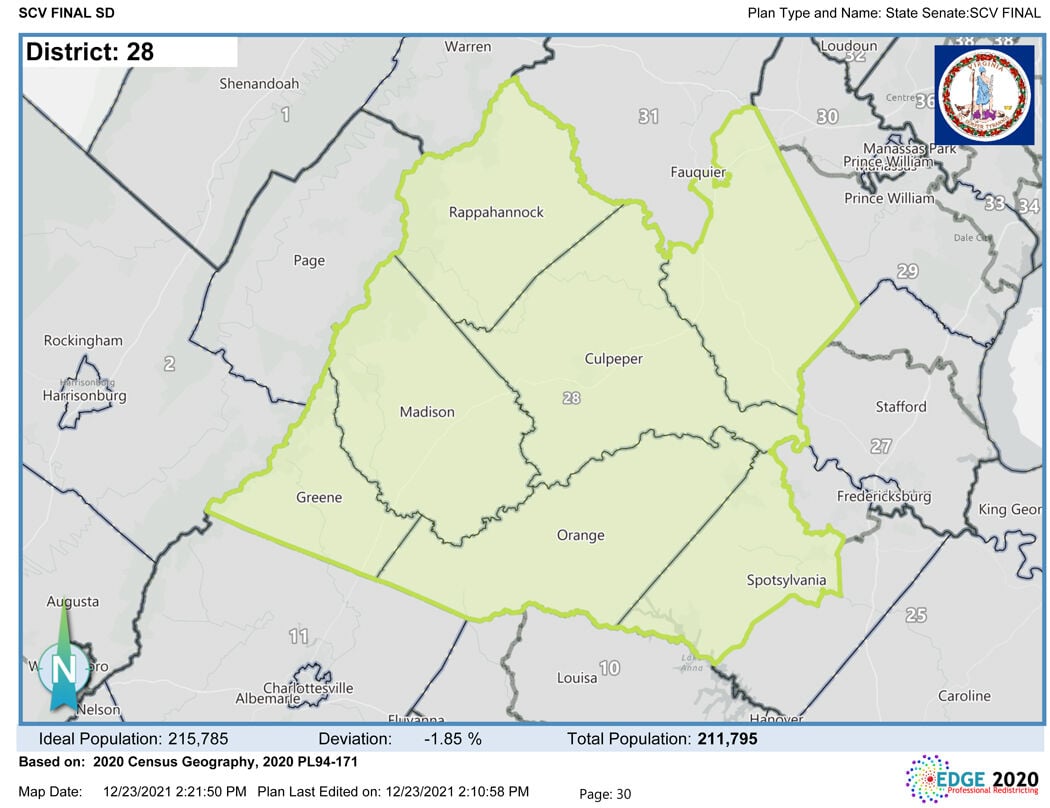 Greene County is now part of the 28th District for Virginia State Senate.

[Editor's note: In the print issue of this week's paper, the federal congressional 7th District was erroneously displayed where this map should have been. We apologize for any confusion.] 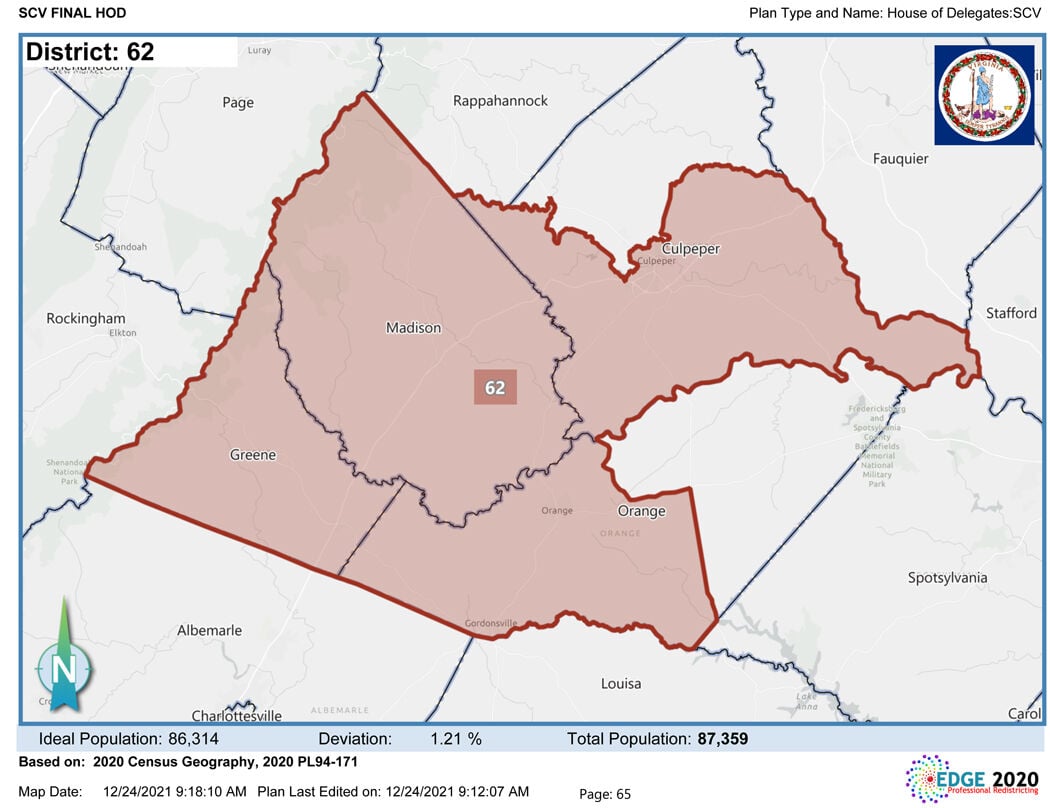 Greene County is now part of the new 62nd District of the Virginia House of Delegates. 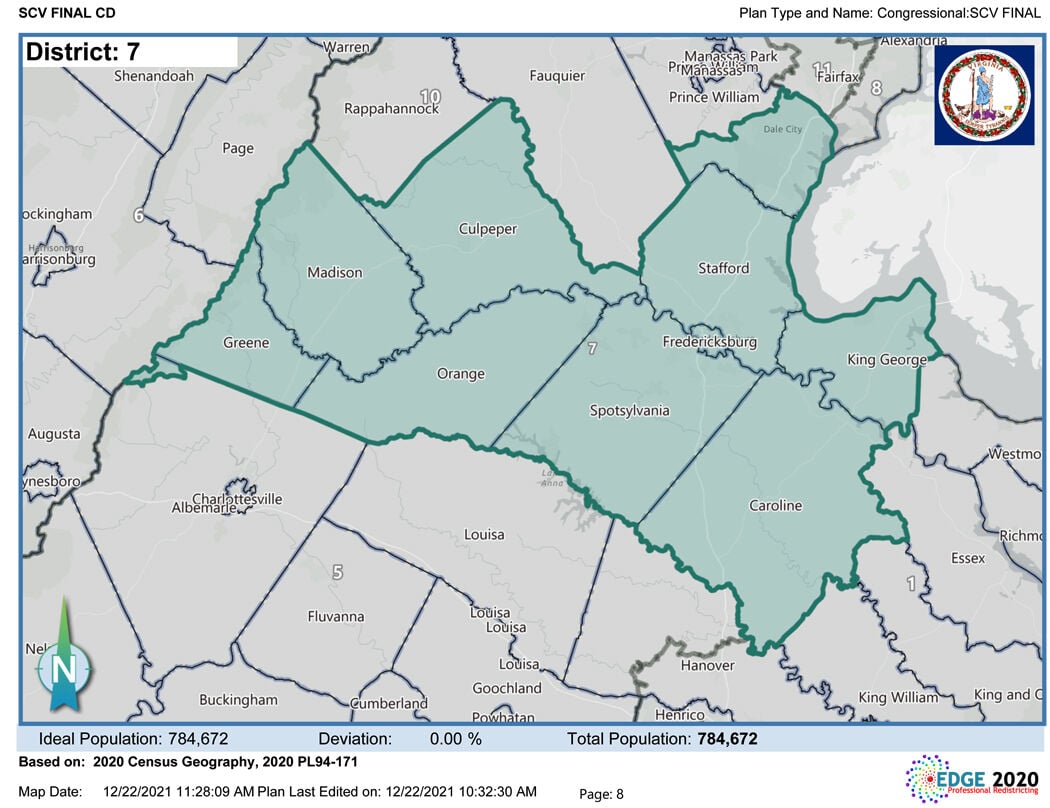 Greene is now part of the 7th Congressional District rather than the 5th. Rep. Abigail Spanberger will be the new federal congressman for the county.