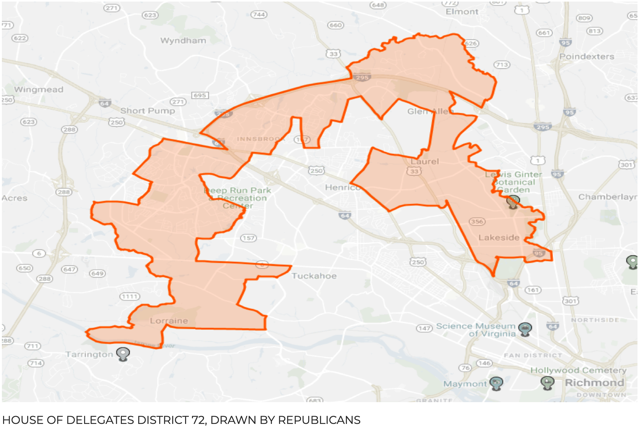 An example of gerrymandering, drawn by Republicans in Virginia. 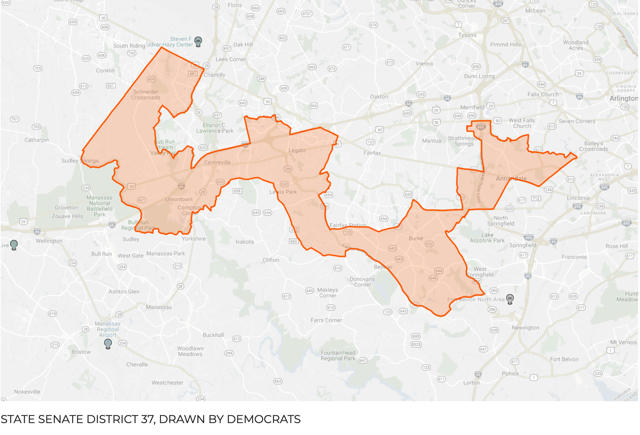 An example of gerrymandering, drawn by Democrats in Virginia.

This election season, Greene County voters will be selecting not only the next president and vice president of the United States, but selecting a new Virginia senator, Congressional representative and voting on two amendments to the Virginia Constitution. What do those proposed amendments say?

Under the current Virginia Constitution, the General Assembly and the governor are responsible for drawing new election districts for the U.S. House of Representatives and the Virginia Senate and House of Delegates. These districts are required to be compact and contiguous, and to have populations that are equal to each other.

The term “gerrymandering,” so named for Massachusetts Gov. Elbridge Gerry who in 1812 signed a bill that redistricted Massachusetts to give political advantage to Republicans in the state, is the manipulating of electoral constituency boundaries so as to favor one party or class above another.

“Amendment one reforms the current broken system that we have for drawing our political districts and puts it on a fair basis so that no party can use the power of redistricting to their own advantage,” Rodemeyer said. His OneVirginia2021 group leads redistricting reform advocacy in south-central Virginia through information campaigns and by volunteering with information tables at polling locations throughout the region.

Although the current system has been in place for more than 200 years, Rodemeyer said gerrymandering is even more of a problem today.

“It’s become much more of a problem now for two reasons,” he said. “One is that with technology, politicians can now draw districts with incredible precision, literally house by house, to draw districts that allow them the certainty that they will win their elections. So in other words, politicians with technology now can choose their voters rather than the other way around.”

The second reason, according to Rodemeyer, is that partisan politics have led to increasing use of gerrymandering to increase the power of the majority party year after year.

“There have been a lot of efforts to change redistricting [systems],” Rodemeyer said. “In Virginia, the only way we get an amendment is when it has been approved by two consecutive General Assemblies, separated by an election; so it’s much, much more difficult to get an amendment in Virginia. This is really taking power away from the General Assembly to control the redistricting process; it’s been very difficult to get legislators … to give up the power.”

Since congressional districts are only redrawn once every 10 years based on U.S. Census data (as mandated in the Virginia Constitution), an amendment approved in 2020 would apply to redistricting slated to take place in 2021.

“Under the current system, whatever political party happens to be in power when the census comes around gets to draw the lines,” Rodemeyer said. “It’s completely driven by partisan politics. This amendment, this commission, would end that because you would have equal numbers of Republicans and Democrats … you would no longer have the situation where one party can draw the lines over the objections of the other party. They have to come to an agreement.”

By opening up the process of redistricting to public scrutiny, proponents of the amendment hope to establish a fairer system of drawing districts that will affect how citizens vote in the future.

Should an automobile or pickup truck that is owned and used primarily by or for a veteran of the United States armed forces or the Virginia National Guard who has a 100% service-connected, permanent and total disability be free from state and local taxation?

In general, the Virginia Constitution requires that all personal property be taxed. However, there are certain exemptions spelled out in the document for real estate or personal property owned by the state, by churches or cemeteries, by public libraries and by schools. This amendment would add cars or trucks belonging to disabled veterans to the list of exemptions from property taxes.

In order for a veteran to qualify for this exemption, they must be permanently and totally disabled and it must be 100% service-connected as defined by state tax code. The exemption status would begin on Jan. 1, 2021, or on the date the veteran acquires the vehicle, whichever is later. The veteran would not get back taxes paid on the vehicle prior to the amendment.

“I think [the amendment] is a very good idea,” said American Legion Post 128 Commander Peter DeForth. “The people who have given their almost-all and have 100% disability really deserve to have a break in any way possible. [The Legion] tries to help them in a variety of ways, but this would be helpful to them; there’s no question about it.”

The American Legion, chartered in 1919, is the nation’s largest wartime veterans service organization, committed to helping veterans and their families during times of need.

“A lot of those veterans with 100% disability wind up getting their disabilities near the end of life, and they need the financial break when they’re in dire circumstances like that,” DeForth said. “So we’re very much in favor of [the amendment]. I can say universally that no single person in our posts would think that was not an appropriate idea.”

To read the full text of both amendments with further explanations and the previous wording of the related segments of the Virginia Constitution, visitelections.virginia.gov/proposed-constitutional-amendment-2020.

An example of gerrymandering, drawn by Republicans in Virginia.

An example of gerrymandering, drawn by Democrats in Virginia.