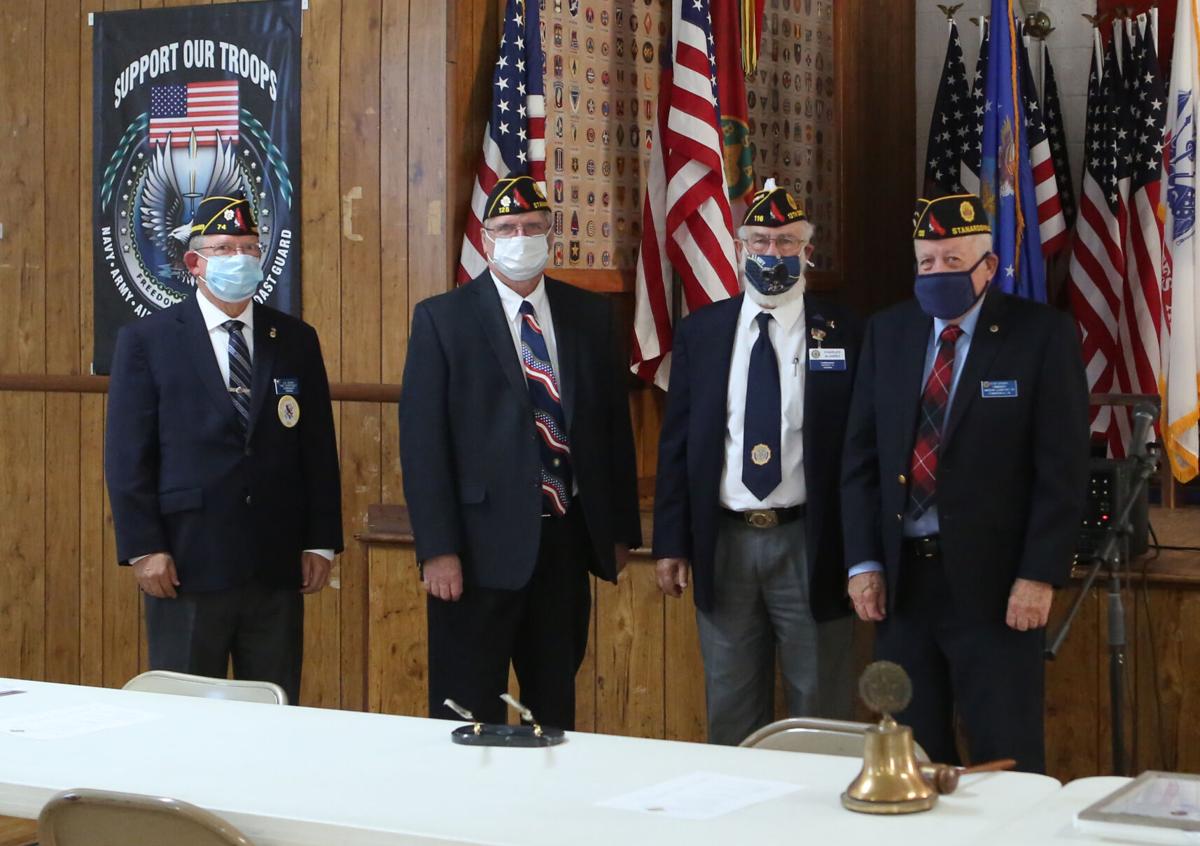 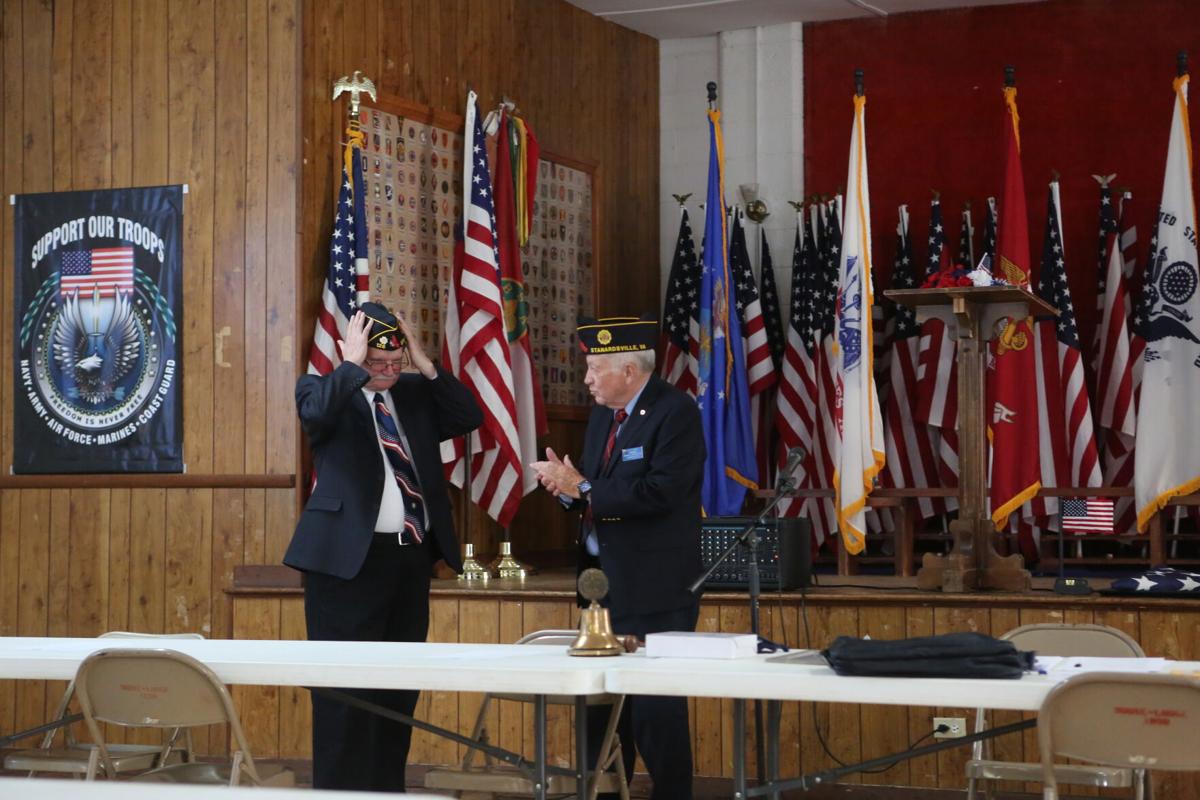 Pat Sherwood places his hat back on after American Legion Post 128 Commander Peter DeForth adds the Post’s Legionnaire of the Year Award pin on it last Wednesday, Sept. 2. 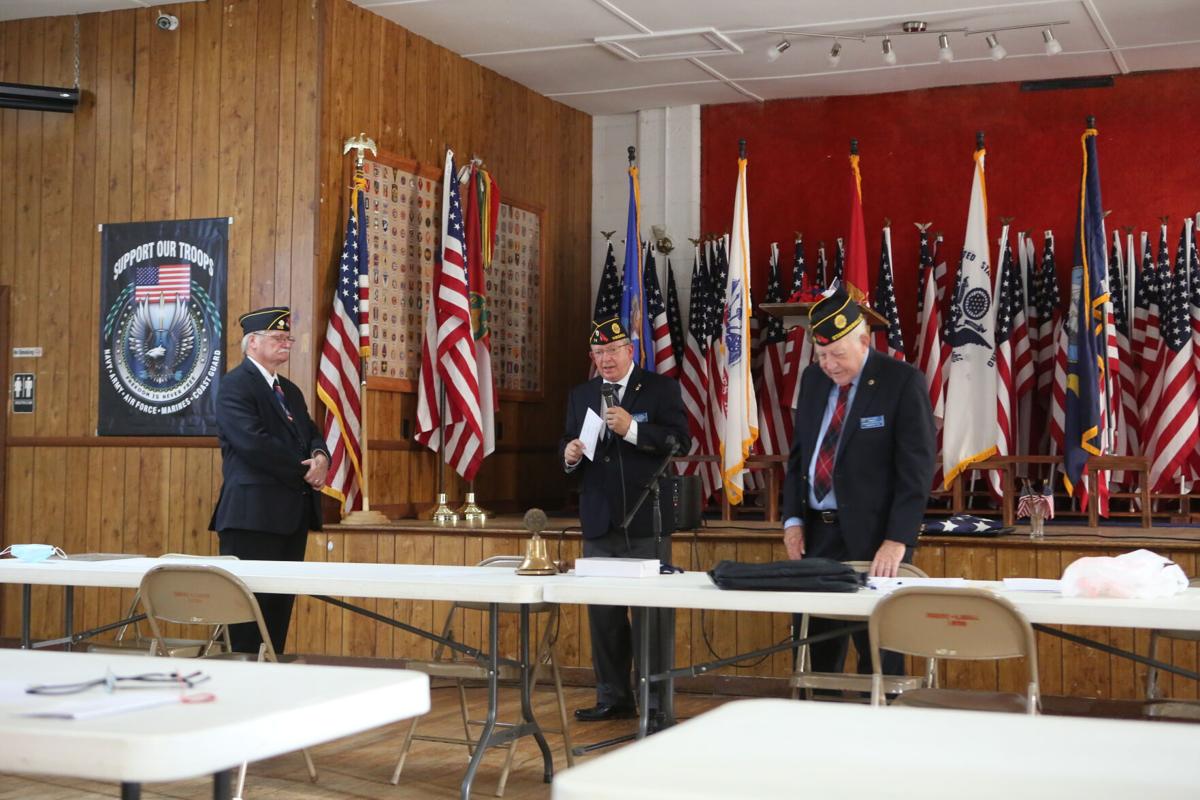 State Immediate Past Commander A.B. Brown offers up congratulations for winning the Northern Region Legionnaire of the Year award.

Pat Sherwood has made a difference at American Legion Post 128 in Stanardsville and last week he was honored as Legionnaire of the Year—not only for the Post, but also for District 13 and for the Northern Region.

“The first words he said to me were ‘I would like to serve as the building manager and all that entails’,” said Post 128 Commander Peter DeForth. “I’m awarding him the Legionnaire of the Year pin for his hat; only one person a year gets that and only if the commander thinks they’re worthy.”

Sherwood said he knew nothing about the nomination until he was notified.

“I had no idea I’d been nominated,” he said. “I’m surprised and humbled.”

Sherwood and his wife, Rosemary, moved to Ruckersville three years ago from New Jersey. He worked in New York City all his working life, first for the architectural firm Skidmore, Owings and Merrill and then for the Port Authority of New York and New Jersey as the manager of the 3D models. Sherwood was in the World Trade Center in 1993 for the bombing, and on the 73rd floor on Sept. 11, 2001 when the plane hit.

No one thought it was intentional, at first, he said. Once the second plane hit, however, they knew. He was one of the lucky ones to make it out. In 2017, he retired and they moved to Greene to be closer to their daughter, Sue, and her family. Their other daughter lives in England and has a place in North Carolina they stay at when they come to visit.

In the couple of years at Post 128, Sherwood has done a lot.

“I’ve done just a little bit of everything,” he said. “We worked with Eagle Scout Liam Jeffers on the front steps, and we have some other projects we want to get done to get the building up to a certain level that pays for itself.”

People can rent the legion building now but they’re hoping to add a full kitchen at some point, as well.

The 13th District Commander Charles Alvaraz presented a certificate to Sherwood at the ceremony on Sept. 2 at Post 128. Department of Virginia Immediate Past Commander A.B. Brown presented a pen and pencil set for the regional honor.

“You said something very, very interesting, that this gentleman, this Legionnaire, approached you directly and asked to be on the building maintenance,” Brown said. “And I’m going to tell ya something, it’s very rare when you see somebody volunteer. You were in the military, you know that just doesn’t happen, so that’s really unique in itself.”

Rosemary was presented with a dozen roses, as well.

“One of the problems with being Legionnaire of the Year is that it takes all your time and about 50% more,” DeForth said. “Anyone who has a wife who will put up with that is great.”

While Sherwood has been a member of Post 128 for only two years, he said he has been a Legion member for more than 20 years, but didn’t participate as much until he arrived in Central Virginia.

“I think like most vets, when you first get out you don’t want to talk about it,” Sherwood said. “But it’s the camaraderie of people who’ve shared your experiences. I didn’t feel like I needed it or needed to meet people because I knew everybody there and I wanted to introduce myself to this place. Plus, the Post needs some active members and I’m retired now so I can do that.”

Sherwood said one of the next projects he’d like to tackle for the Post is having the wooden floors finished. The Post would also like to hook up to the main water system, but it’s more than $10,000; they currently use a well.

Unfortunately with COVID-19 this year the Post has not been able to participate in the usual fundraising activities so there is not a deep coffer to draw from at this time. The Post does accept donations, though.

Donations can be mailed to P.O. Box 424, Ruckersville, VA 22968. Make checks payable to American Legion Post 128 and put “Donation” in the memo line.

“The idea is to get the building up to at least where it pays for itself so the Post can concentrate on what it’s supposed to be doing, like helping veterans, supporting the boy scouts more,” Sherwood said. “This is our biggest asset so if it could make money to bring into the Post we can put the money back out in the community.”

For more information about Post 128 programs/activities, membership or related matters, contact DeForth via email at deforth@aol.com or call (703) 477-2868 or email Doug Fargo at dougfargo123@gmail.com.

Greene County’s reputation of coming together in dire times is one that’s well-earned; when a neighbor is in need, we come together to help. W…

The Rapidan Service Authority (RSA) Board of Members first action at its monthly meeting on Sept. 17 was to prohibit the Greene County represe…

RISE-Greene County will host an open voting block party next weekend in Stanardsville.

Water covers about 71% of the Earth’s surface, the majority of which is found in the ocean and too salty to be used for drinking or growing cr…

After an unprecedented six-month closure of all public school buildings in the county due to the global COVID-19 pandemic, Greene County Publi…

The Greene County Planning Commission held three public hearings at its Aug. 19 meeting, approving a rezoning in Ruckersville, a rezoning in S…

Dogs have been by humans’ sides for more than 15,000 years and we’re still learning about all they can do. From sniffing out illnesses in huma…

Bob Good, Republican 5th district nominee for Congress, held a campaign rally in support of law enforcement on the steps of the Stanardsville …

Completed only once a decade, the United States Census determines congressional representation, informs hundreds of billions in federal fundin…

The Greene County Commissioner of Revenue has requested another trial continuance due to the coronavirus pandemic, according to a motion filed…

Pat Sherwood places his hat back on after American Legion Post 128 Commander Peter DeForth adds the Post’s Legionnaire of the Year Award pin on it last Wednesday, Sept. 2.

State Immediate Past Commander A.B. Brown offers up congratulations for winning the Northern Region Legionnaire of the Year award.